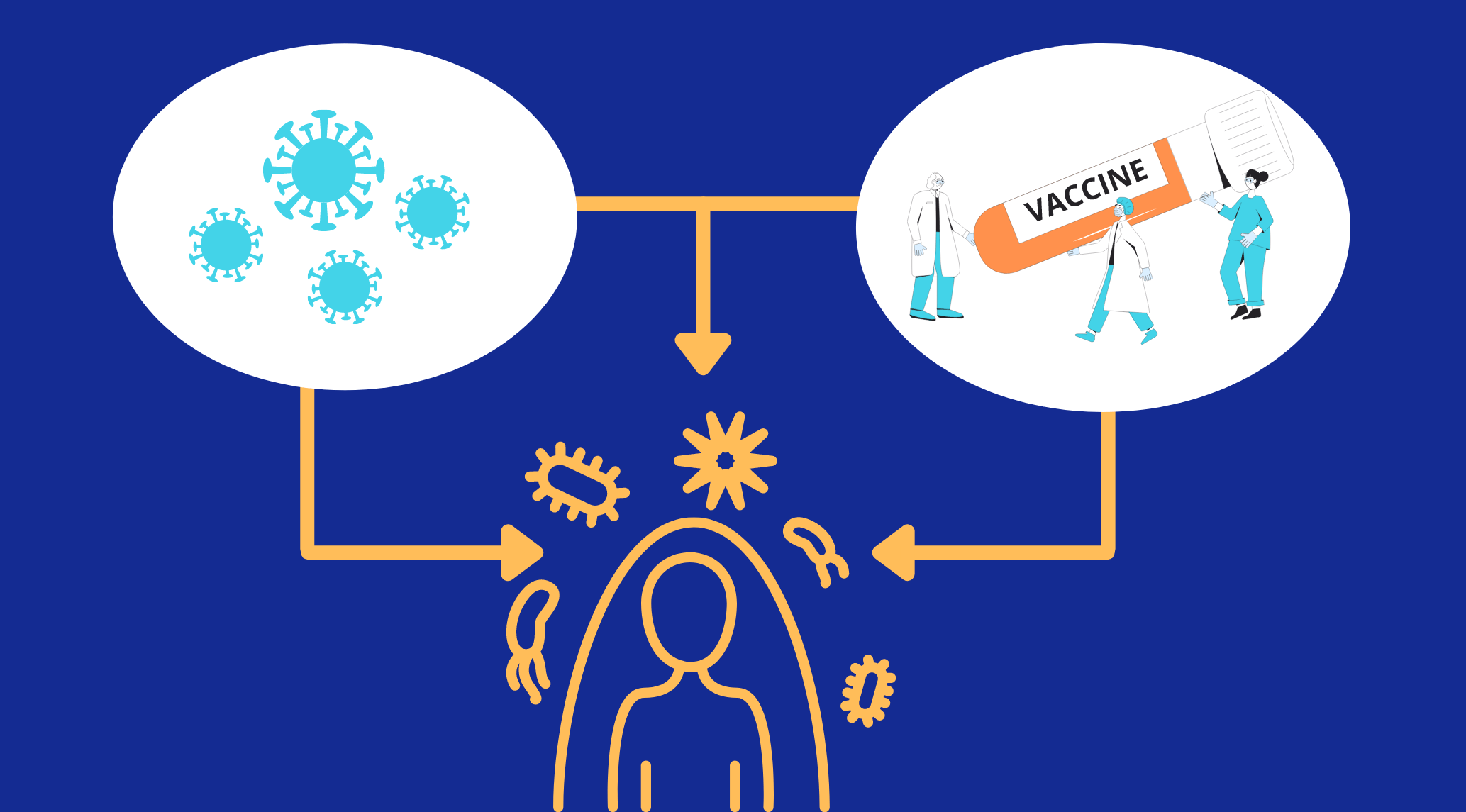 Multiple articles and social media posts have debated the strength of infection-induced immunity​​—commonly referred to as natural immunity—compared to vaccination when it comes to the best protection against COVID-19. Public health authorities like the U.S. Centers for Disease Control and Prevention (CDC) have recommended that previously infected people get vaccinated. But scientific studies have also shown that survivors in general develop some degree of protection from reinfection. This has led some people to raise questions about the necessity of getting vaccinated if one had been infected before.

To address this question, this Insight article discusses the scientific evidence regarding the protection offered by infection-induced immunity and how its benefits and risks stack up against vaccination.

Multiple studies found that people previously infected with SARS-CoV-2 are less likely to be infected again.

For example, a preprint (a study not yet peer-reviewed) authored by researchers in Israel reported that, compared to previously infected individuals, fully vaccinated people who weren’t infected before were more than 13 times more likely to develop a breakthrough infection with the Delta variant, and also more likely to be hospitalized[1]. However, this preprint possessed several issues that affect the validity of its conclusions, such as selection bias in the population it studied. [Editor’s note: the preprint has since been published in the peer-reviewed journal Clinical Infectious Diseases.]

A study published in the journal Lancet, conducted by researchers in Denmark, reported that protection against reinfection was 80.5% among all previously infected people[2]. But their findings came with caveats: when analyzing only those aged 65 and above, that protection fell to 47.1%. Taken together, the findings suggest that while natural immunity develops in the elderly, it is also likely to weaken sooner than in younger age groups.

Another study in U.K. healthcare workers, also published in the Lancet, similarly reported that previously infected people were 84% protected from infection, and that encouragingly, this protection endured for seven months after infection[3].

Vaccination is effective at providing protection against disease, but combining vaccination with infection provides even stronger immunity to COVID-19

Multiple scientific studies showed that the COVID-19 vaccines are highly effective at protecting people from illness, hospitalization, and death in the real world, even against the Delta variant[4-6].

But promising results about immunity after previous infection led some prominent individuals, such as U.S. Senator Rand Paul, to claim that there’s no need for previously infected people to get vaccinated, since vaccination offers no additional benefit.

Others, like radio talk show host Dennis Prager, went a step further. He stated that he tried to contract COVID-19 on purpose, since he believed that infection-induced immunity is “by far the more robust immunity that one can have against COVID-19”.  A similar claim that “Natural Immunity [is] Superior to Vaccine Immunity” was also propagated in a letter by the Informed Consent Action Network, an organization that opposes vaccination and has been identified as a key organization sowing vaccine disinformation on social media by the Center for Countering Digital Hate.

Scientific studies have shown that the first claim isn’t true, while the second isn’t supported by the current scientific evidence, as we will explain further below. On top of this, the claim that infection-induced immunity is superior to vaccination fails to consider the repercussions—both on the individual and the community—from people opting to get infected en masse in the belief that it offers better immunity as opposed to vaccination.

Likewise, a study in the U.K., published in Nature Medicine, reported that protection against infection “was significantly larger in vaccinated individuals with evidence of prior infection than in vaccinated individuals without prior infection”[4]. A preprint regarding the results of a study in France also found that while previously infected people produced protective levels of antibodies against the virus, vaccinating after infection boosted antibody levels and strengthened protection against variants[7].

Research groups in the U.S. also reported the same findings, as discussed in this news article by Nature. The article termed this phenomenon “hybrid immunity”. For example, this study, led by scientists at the Fred Hutchinson Cancer Research Center, found that vaccinating previously infected people enhanced the ability of antibodies to neutralize (inhibit infection by) SARS-CoV-2 variants[8].

Another study conducted by scientists at the Rockefeller University also found that vaccination increased the number of memory B cells and enhanced the ability of antibodies to neutralize SARS-CoV-2 variants in previously infected individuals[9].

Taken together, these findings indicate that rather than framing SARS-CoV-2 immunity as a competition between infection and vaccination, a more representative framework is encapsulated in the concept of risk reduction. For example, cars contain multiple safety features, like an airbag, brakes, and seat belts. But we don’t consider brakes or airbags redundant just because we’re wearing seat belts—all three are multiple layers of protection that add up to minimize as much as possible the risk of injury in the event of a car accident.

The concept of using multiple layers of defenses to combat the spread of COVID-19 is illustrated in this figure below by virologist Ian Mackay.

The claims that infection-induced immunity is “by far the more robust immunity that one can have against COVID-19” or is “superior” to vaccine immunity isn’t supported by scientific evidence at the moment. In fact, a study published by the CDC in October 2021 found evidence to the contrary. It reported that unvaccinated people who were previously infected were about five times more likely to be infected in future compared to vaccinated people with no prior infection[10].

In summary, if we frame the question about SARS-CoV-2 immunity around the idea of reducing risk as much as we reasonably can, as opposed to a debate built upon the false dilemma of choosing between “natural immunity” and vaccination, individuals and communities reap more benefits to immunity. There’s no question that a previous infection offers protection, but given the virus’ ability to mutate and generate new variants, previously infected individuals benefit from getting vaccinated, which scientific studies have shown provides another layer of protection in addition to their pre-existing immunity.

Infection-induced immunity and vaccination each provide protection, but infection is riskier

For starters, getting the disease to develop immunity involves taking one’s chances with the risk of severe illness and death. Whether they’ll be hospitalized or die from COVID-19 isn’t up to the individual.

Specifically, a study published in the British Medical Journal estimated that out of 10 million people who received the Oxford-AstraZeneca vaccine, 66 would be hospitalized or die from venous thromboembolism. But among those who test positive for the virus, the same condition would occur in 12,614 per 10 million people[11].

In summary, even though vaccination comes with some risks, the risks associated with COVID-19 are greater, so acquiring immunity through vaccination is safer and minimizes avoidable illnesses and deaths that occur due to infection.

Apart from the risks to the individual, there are risks to the community. Those who actively try to get infected, like Prager did, become a vector for transmitting the virus to other people. Some of these people may be more vulnerable to COVID-19 and are more likely to require hospitalization and die from COVID-19, such as those with certain medical conditions, like asthma and pregnancy.

Another group that is vulnerable to COVID-19 are people with weakened immune systems. This can include people on immunosuppressive drugs, like those who received transplants, and people whose immune systems don’t work properly because of illness. This group cannot safely rely on infection-induced immunity for obvious reasons and there are many such people in the community. A survey conducted by the CDC in 2013 found that about 2.7% of U.S. adults reported being immunosuppressed[13]. According to data from the U.S. Census Bureau, there were more than 242 million adults in the U.S. in 2013, which translates to more than 6.5 million immunosuppressed adults in the community. Although this population can be vaccinated to shore up their defenses against COVID-19, their ability to respond to the vaccine is limited due to their weakened immune system.

In addition, the number of people who are ill from COVID-19 that require hospitalization would significantly tax healthcare systems. Hospitals in certain parts of the world, including Italy, Brazil, and the U.S., had to turn away patients due to overburdened staff and other resources as a result of COVID-19 case surges. This impacts healthcare services even for people requiring treatment for non-COVID-19 related conditions, which can and has resulted in avoidable deaths when people cannot get the care they need, as in the case of U.S. Army veteran Daniel Wilkinson.

There’s also some evidence suggesting that infection-acquired herd immunity to COVID-19 alone won’t be enough to stop the spread of the disease. Certain parts of the world saw such widespread infection in the first COVID-19 wave that the majority of the population became infected, which would theoretically provide a level of protection from herd immunity. One such example is the city of Manaus in Brazil. But it nevertheless experienced a second, more severe, wave of cases[13,14], indicating that naturally acquired herd immunity alone won’t stop the spread of COVID-19.

Immunity in the context of the Omicron variant

The Omicron variant, which has since overtaken the Delta variant to become the dominant SARS-CoV-2 variant in the U.S. and globally, has proven to be more infectious than earlier variants.

However, a study in Qatar observed that, as with earlier variants, previous infection provided some protection against reinfection by the Omicron variant, at least when measured based on incidence of symptomatic disease, although this protection waned over time[16]. The study didn’t include vaccinated people, so no comparison could be made with vaccine-induced protection.

That said, Omicron has proven more adept at reinfecting people compared to previous variants like Delta[17], indicating that previous infection offers a limited amount of protection. A study in Iceland, which included both unvaccinated and vaccinated people, estimated reinfection rate in those between 18 and 29 years of age at about 15% in the first three months of the Omicron wave[18].

In the face of variants, vaccine effectiveness against infection too has waned, particularly with Omicron[19]. But studies show that COVID-19 vaccines remain highly effective at protecting people from severe disease and death[20-22].

And a population study in Quebec, Canada, also showed that “hybrid immunity”—previous infection and vaccination—provided the strongest protection against Omicron reinfection and hospitalization compared to those who had either been infected only or vaccinated only[23].

These findings show that with the Omicron variant, vaccination continues to provide benefits even to previously infected individuals.

Scientific evidence has shown that infection-induced immunity as well as vaccination provide protection against infection. However, infection-induced immunity is riskier, as people who get infected run the risks of illness, hospitalization, and death. Even though COVID-19 has a relatively high survival rate, a certain proportion of survivors develop persistent health problems that affect their quality of life. Apart from risks to the individual, infected people pose a risk to the community, as they can transmit the virus to other people, including those more vulnerable to COVID-19.

Vaccination provides immunity that is effective against infection, illness, and hospitalization, without the same risks.

In short, the benefits of vaccination outweigh its risks. The same cannot be said of so-called “natural immunity”.

The CDC published a Science Brief which provides an overview of the scientific evidence on infection-induced and vaccine-induced immunity.

A year on since this article’s publication, the Omicron variant emerged. To keep things up-to-date in this article, we included new information specific to Omicron-related immunity.

We removed the incorrect statement that 1 in 5 adults in the U.S. were immunocompromised.