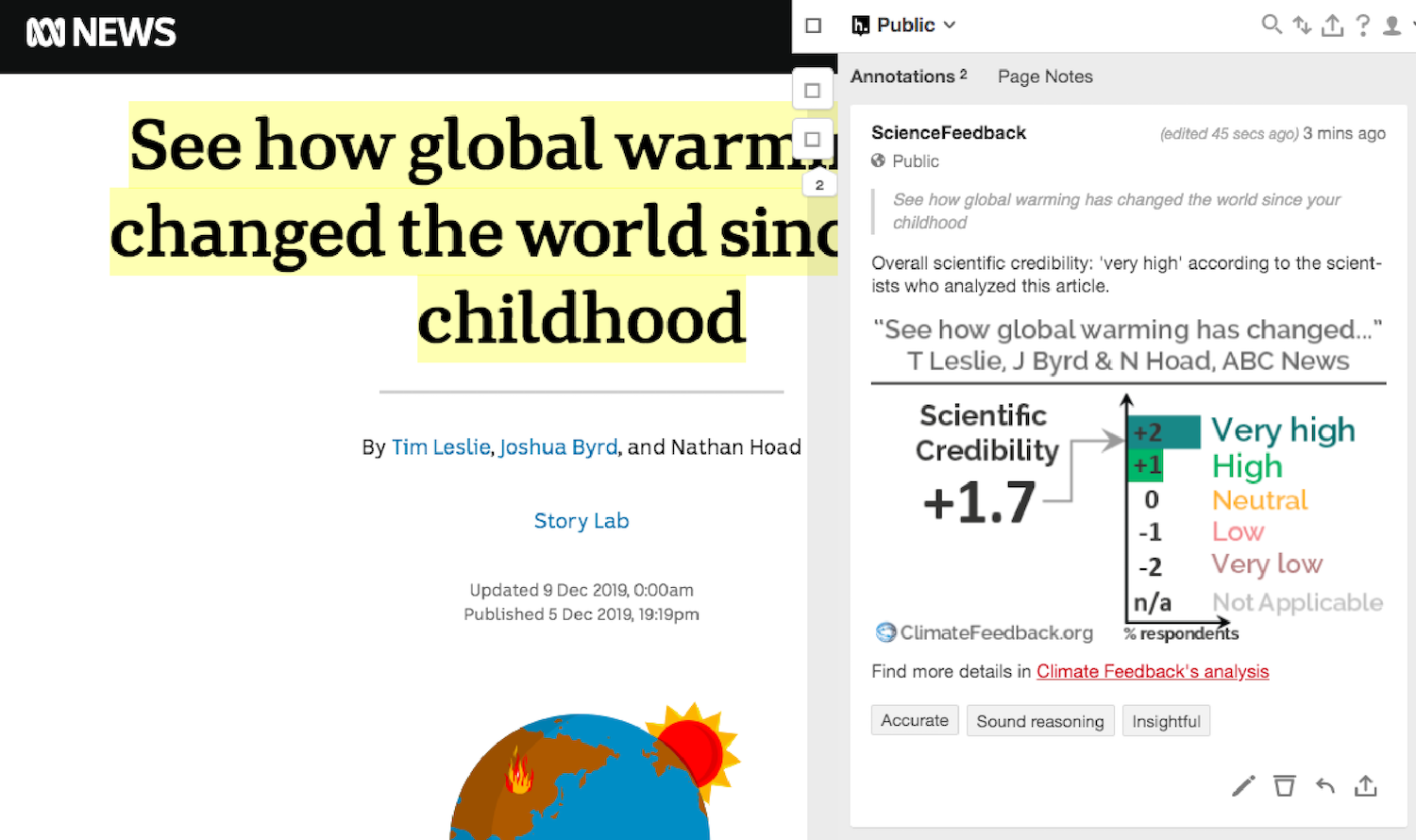 This interactive article at ABC allows readers to enter their year of birth and see how temperatures have changed in their lifetime in relatable ways. It also describes projections for future change in Australia, including extremes like heatwaves and bushfires. The article highlights the difference between projections with aggressive emissions reductions and those where emissions continue to increase.

Scientists who reviewed this article found that it presents accurate information on these topics and communicates that information effectively.

Mark Richardson, Postdoctoral scholar, Jet Propulsion Laboratory, California Institute of Technology:
This is a sound article with a solid scientific basis, and the most important sources are provided. I judge its accuracy as « high » rather than « very high » because some of the difficulties and uncertainties are glossed over. For example, looking at short periods in a single country can be difficult, and changes in biological systems like coral reefs are very hard to project. Overall I believe the authors have done a good job at accurately distilling the research on a complex topic.

Amber Kerr, Researcher, Agricultural Sustainability Institute, University of California, Davis:
This is one of the best pieces I’ve seen on how climate change will impact a particular country within an individual’s lifetime. The projections they used for temperature increase under mitigation and non-mitigation scenarios are, unfortunately, quite accurate. (We all wish the news weren’t so bad, but it is.) The authors correctly explain how even moderate climate change causes a drastic increase in the number of extremely hot days, which are defined either as days above a certain temperature or as days where the temperature exceeds a certain percentile (usually 99th) of historical data. The authors also correctly explain that the effects of climate change on other natural disasters (such as droughts, floods, and bushfires) are much harder to predict and are not always in a single direction. I found no inaccurate or misleading data in this article. The authors did an excellent job explaining climate variability, climate trends, and future warming in a way that was both scientifically accurate and emotionally compelling.

Andrew King, Research fellow, University of Melbourne:
This article is exceptionally good in delivering accurate information in an engaging way. There are many useful statements made about the effects of climate change on extreme weather globally and in Australia and these have been backed up by links to relevant peer-reviewed literature.

Andreas Klocker, Physical Oceanographer, University of Tasmania:
This is one of the most well-written articles explaining climate extremes which I have read so far. It explains clearly the difference between changes in global mean temperature and extreme events, a topic which can be very confusing to non-scientists. This article is very credible, with references throughout the article backing up the statements made.

Small increases in average temperature translate to big increases in the number of extremely hot days, and those hot days have a big impact.

When the Emergency Leaders for Climate Action approached the Federal Government in April they were drawing on decades of data showing that fire conditions are getting worse.

Andrew King, Research fellow, University of Melbourne:
The Forest Fire Danger Index (FFDI) does indeed point to worsening conditions. It’s worth noting though that it’s very hard to characterise bushfire risk using a single index and the FFDI wasn’t designed with a changing climate in mind. In general, there is a great deal more confidence in projections for extreme weather like heatwaves than there is for bushfire weather.

So it’s hotter, and there’s a greater risk of bushfires, but has Australia been getting drier? I mean, there were droughts when you were a kid, right? Well Australia hasn’t been getting drier overall, but where the rain is falling is changing and that is already having a big impact.

Andrew King, Research fellow, University of Melbourne:
This is a great way of communicating a more nuanced change in the climate.

As the temperature has increased, so has the ability of scientists to determine whether specific events are linked to climate change. They can now model how likely a specific event would be to occur under historical conditions, compared to the record temperatures we’re experiencing.

Andrew King, Research fellow, University of Melbourne:
This is an accurate description of event attribution.

And by the time they turn 50, if globally we had managed to halt our emissions quickly back in the 2020s, the temperature will have begun to stabilise. We’ll still be facing extreme heat, but at a far more manageable level than if we’d done nothing to halt climate change.

Andrew King, Research fellow, University of Melbourne:
The whole section on future climate projections under different scenarios is superbly explained. The information is well delivered and backed up by relevant peer-reviewed literature.