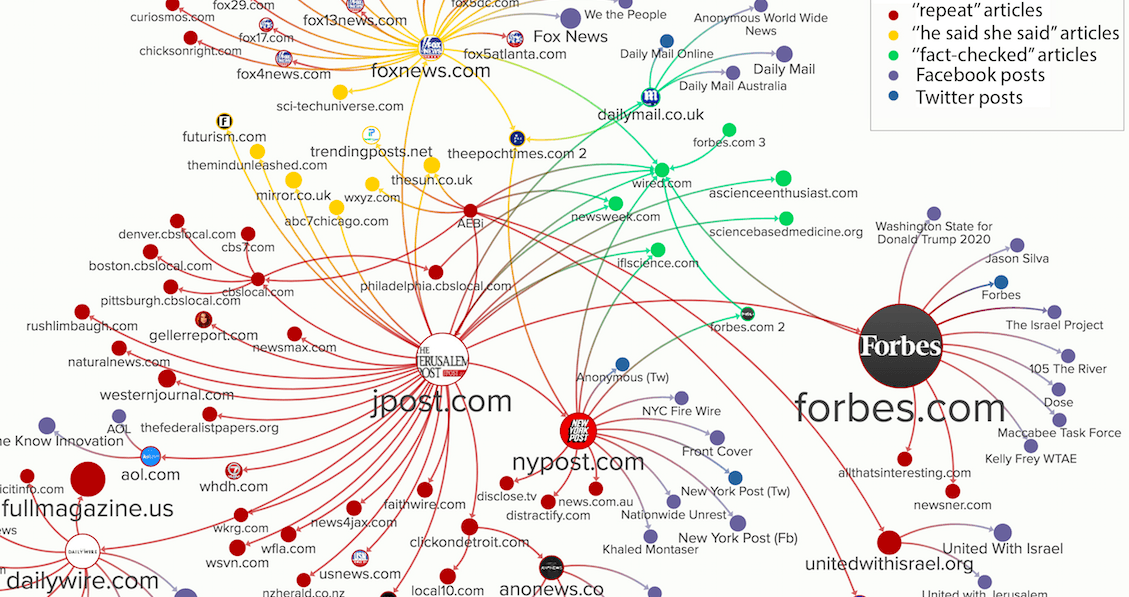 Another purported cure-all for cancer

A claim that the “first complete cure for cancer” had been discovered by an Israeli startup made waves on the Internet recently. This claim originated in a 28 Jan. article by the Jerusalem Post, in which Dan Aridor, CEO of the company Accelerated Evolution Biotechnologies (AEBi), announced that they had discovered a cure for cancer using phage display technology. However, upon closer examination of the company’s experimental results thus far, it turned out that these claims were based on only a few experiments on cells in petri dishes and one mouse experiment. Such work falls far short of the standard needed for AEBi to make the claims it did, making their statements highly misleading. As we wrote in our claim review, AEBi’s claims also mislead readers about cancer’s fundamental characteristics and the typical drug development timeline.

This claim of a groundbreaking discovery spread quite widely, mostly driven by the initial coverage from the Jerusalem Post. We identified 709 articles from the past month linking back to the Jerusalem Post article and a few hundreds more covering the claim by conducting a search on Buzzsumo. These articles have been shared nearly 4 million times on social media as of writing, with Facebook accounting for the overwhelming majority of engagements with all articles (98% of all shares happened on Facebook).

We examined each English-language article reporting AEBi’s claims which were shared at least 5,000 times (a total of 76; for the complete list, see below, Table 1). Most of these were news articles, blog posts, commentaries or opinion pieces. Some appeared in partisan outlets such as The Daily Wire, The Western Journal, The Geller Report, The Rush Limbaugh Show and The Federalist.

We found that 59 of these articles took the claim reported by the Jerusalem Post at face value. These articles failed to perform significant fact-checking or scientific verification of these claims (some included only a very minimal check with independent experts) – a basic practice in responsible journalism. These articles also failed to signal to readers that the report was unsubstantiated. We classified these unreliable articles as “repeat” in the figure below.

Of the 59 articles rated “repeat”, Fox News articles stood out, representing 17 articles appearing across various Fox News domains. Most of the articles within the blog/commentary/opinion category were also found to be unreliable and repeated the claim without fact-checking. One of these articles originates from the Natural News blog, which is a well-known source of misleading and/or inaccurate health news. Yet it still garnered more than 17,000 shares on Facebook.

10 articles reported both AEBi’s misleading claims and the point of view of independent physicians and scientists, but did not help readers to assess which claims were more likely correct. As the saying goes in journalism:

“If someone says it’s raining, and another person says it’s dry, it’s not your job to quote them both. Your job is to look out the window and find out which is true.”

These articles are classified as “he said she said” in the graph below. Most of them have a misleading title, which does not indicate to readers that the claims are unsubstantiated.

Only 7 articles performed the necessary fact-checking of the claims by seeking experts’ feedback or independently checking current scientific evidence. We classified these articles as “fact-checked”. These were published by Daily Mail, IFLScience, Wired, Newsweek, Forbes, and the blogs A Science Enthusiast and Science-Based Medicine. 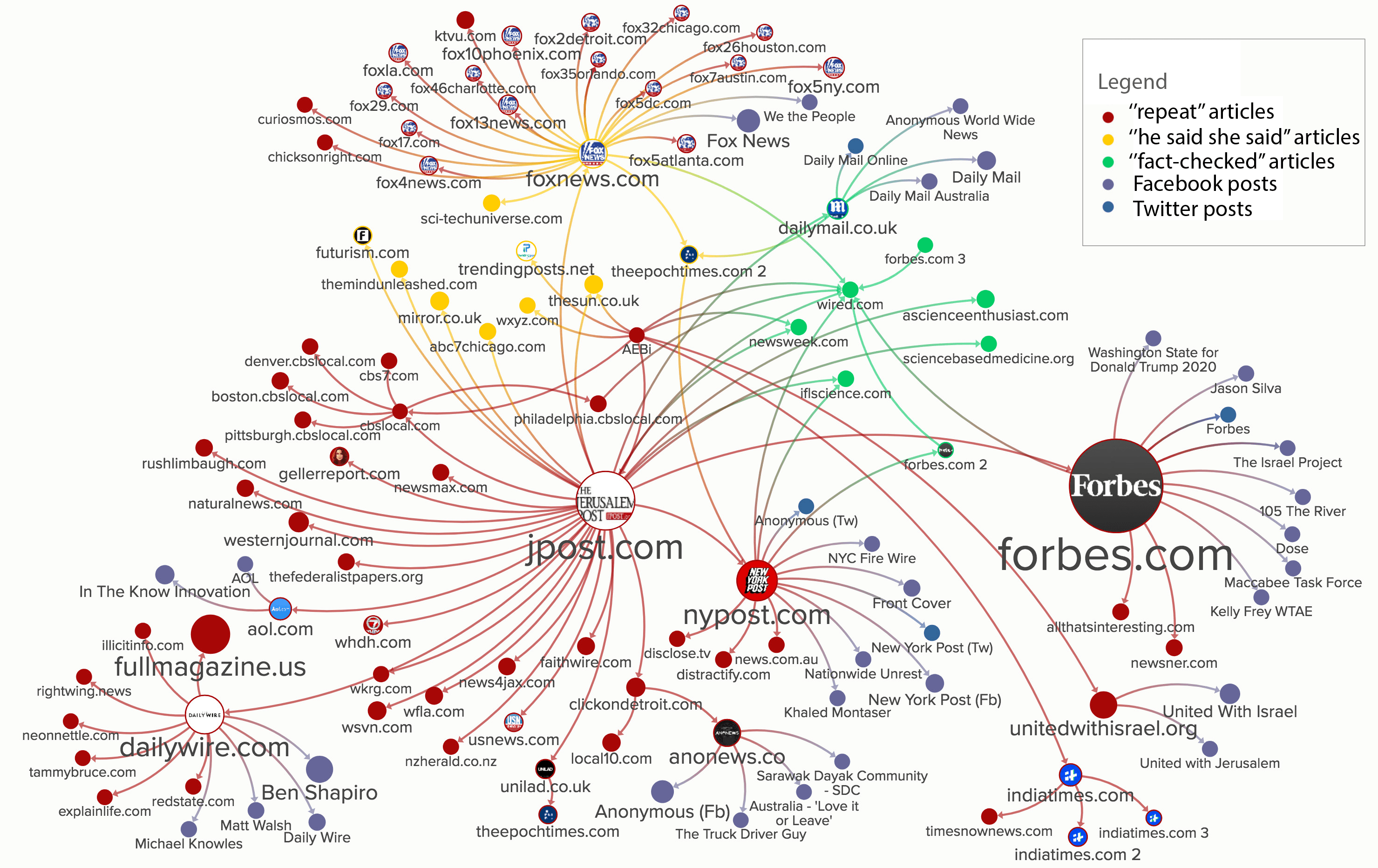 Figure – Network of outlets, blogs, and social media profiles who have commented on AEBi’s claim. Dot sizes are proportional to the total number of shares and interactions on social media; arrows display the spread of the claim: pointing from the source article to the one citing or linking to it (click on the map to enlarge)

In addition to our Buzzsumo analysis, we also performed several Google searches from different computers in different locations (see here for an example of the search results) for “cure cancer” in the past month. As most readers interact only with the results from the first page, we limited our analysis only to the articles showing on the first page in at least one search (our results might not be exhaustive; see Table 2 below for the list of relevant pages).

We found that most first-page articles were related to the Jerusalem Post article, in keeping with its popularity. However, our results this time were more encouraging. The majority of the listed articles had performed fact-checking, verified the scientific evidence and debunked the hype (10 out of 14). Despite the overwhelmingly large shares enjoyed by misleading articles on Facebook, only 3 articles repeating the claim made it to the first page, as well as 1 article of the “he said she said” type. This indicates Google has a better way of highlighting trustworthy sources, although the presence of misinformation is problematic since users often rely on Google for fact-checking.

Some of the most-shared articles appeared to give credence to the Israeli team’s claims, not due to the strength of their scientific evidence, but because the writers held a pro-Israel stance. For instance, a blog named Unitedwithisrael.org reported the findings uncritically and The Daily Wire used the headline “Still Want To Boycott Israel? Israeli Scientists Find Cure For Cancer, Report Says”. These and other examples show that a predisposition in favor of the scientists’ country of origin might have caused some writers to overlook the evident flaws in their claims.

AEBi’s claims were roundly criticised by numerous physicians and researchers working on cancer because of the lack of supporting evidence. Certain news outlets, such as Forbes and New York Post, which had published articles announcing these claims without fact-checking, later published articles with comments by relevant experts that explained the problems with AEBi’s claims.

Unfortunately, all this has come too late; none of the later articles involving fact-checking made it to our list of widely-shared articles based on the Jerusalem Post report. Two of the correcting articles from Forbes have each been shared 6,200 and 2,800 times, while the one from the NYPost has been shared 3,500 times. Contrast these numbers with the shares of their earlier misleading articles, which currently stand at over 790,000 times (Forbes) and over 260,000 times (NYPost). So on the whole, these two media outlets have misinformed more people than they have informed.

One of the articles correcting the record was published by Wired, which critiqued the premature claims, commenting on how similar they were to past sensational claims about cancer cure-alls which turned out to be false or unfounded. The article also highlighted how the lack of critical thinking and a desire for positivity drive the propagation of misinformation of this sort. “The ‘Cancer Cured!’ piece is going to travel farther, faster, than the ‘Cancer Still Sucks’ story,” writes Molteni, the article’s author.

In keeping with this statement, we have found that the amount of media coverage that is not credible greatly outweighs those from credible sources. The number of shares from non-credible (“repeat”) articles was more than 3.4 million (87.3% of total shares), with credible articles accounting for just over 120,000 of total shares, a mere 3.1%. 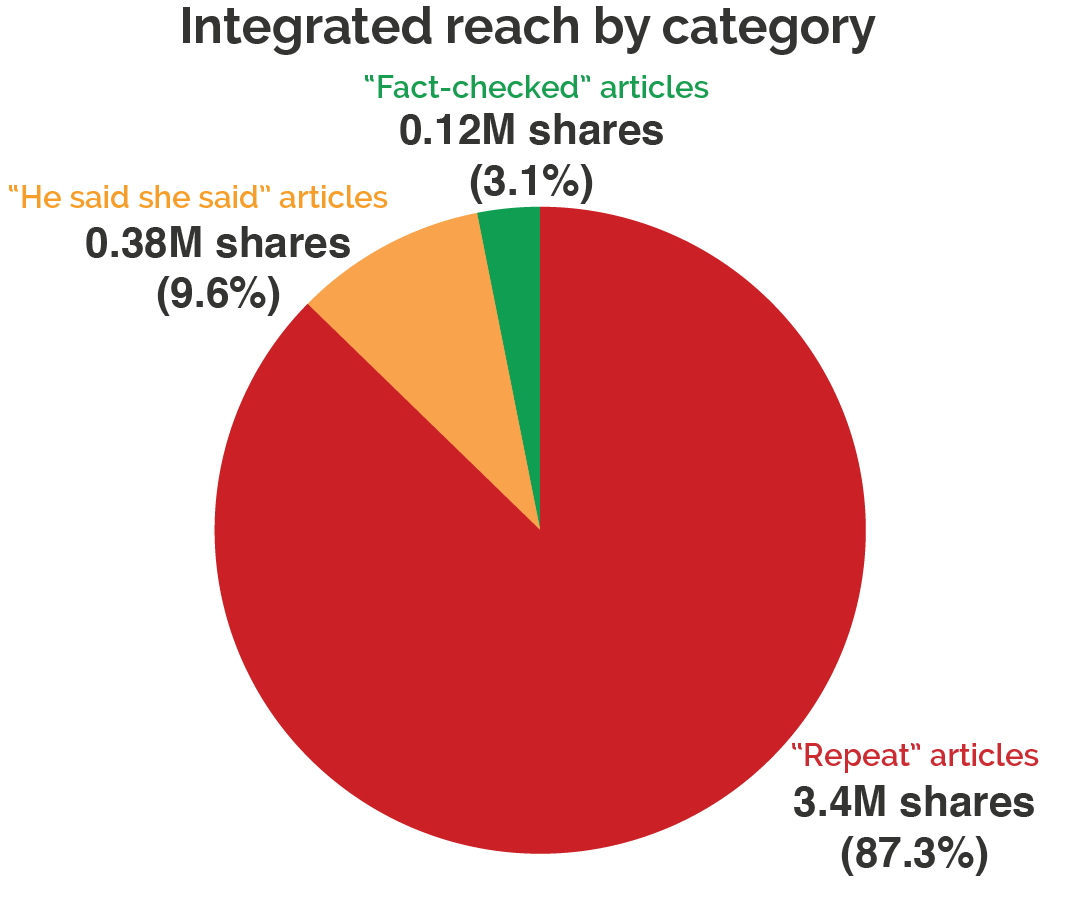 In summary, our observations strongly indicate that the general public is not likely to have come across an insightful and accurate scientific evaluation of the claims. Instead, many people have been exposed to – and maybe have come away with – the idea that all cancers will be completely cured “within a few years”, as AEBi claimed, when all evidence points to the contrary. When the mission of journalists is arguably to leave readers better informed, hundreds of online news sites have instead done the exact opposite. Omitting investigative reporting and independent verification of scientific facts in favour of attention-grabbing headlines –whose effects are amplified by the power of Facebook’s reach– has led to the misleading of many readers.

Such unfounded sensational claims merely provide false hope for desperate patients and their loved ones, causing unwarranted emotional and psychological distress. And when such claims are found to be false, it only adds to the public’s distrust of the medical and scientific communities, which have negative consequences for the public’s attitude towards informed health advice by experts.

Table 1 – List of the most shared articles reporting on the misleading cancer cure claim. Data from buzzsumo.com

Table 2. List of results from Google search for the phrase “cure cancer” appearing on the first page of at least one query