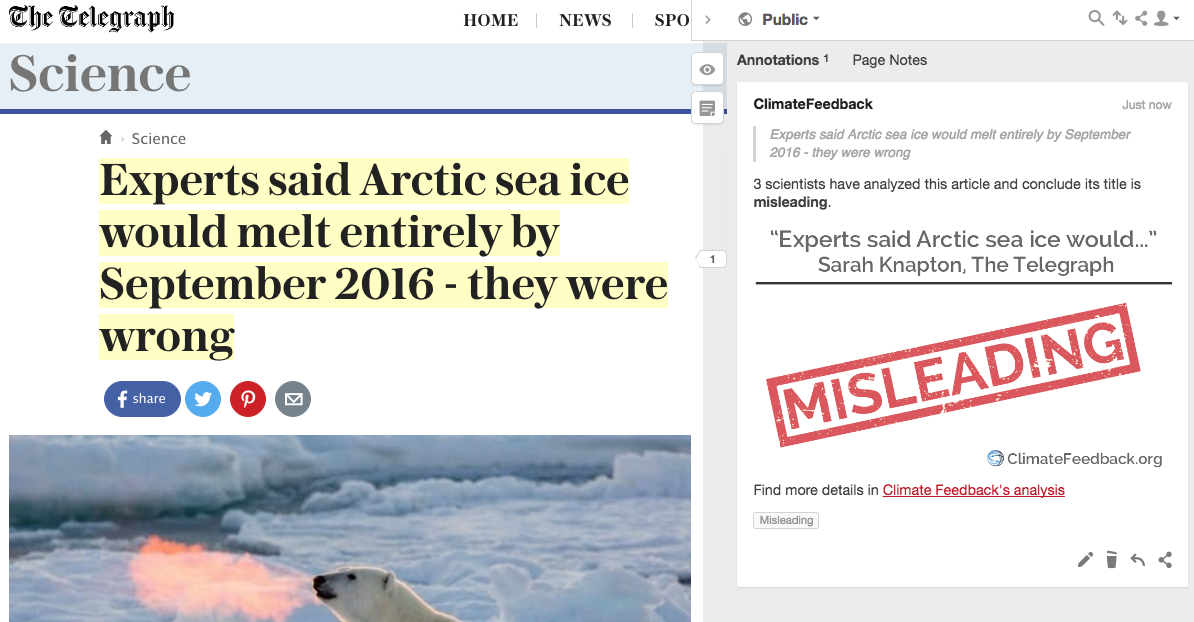 A recent article in The Telegraph by Sarah Knapton examined extreme projections of imminent Arctic sea ice loss made by two researchers, including quotes from several other researchers who explained that the rest of the scientific community has always criticized these extreme projections. Unfortunately, the article ran under the misleading headline “Experts said Arctic sea ice would melt entirely by September 2016—they were wrong”. The headline gives the impression that these extreme predictions were made by a significant portion of sea ice “experts”.

We asked several scientists—including one who was quoted in the article—to discuss the accuracy of the article and the headline it ran under. Their full comments appear below.

Journalists rarely have control over headlines, which can sometimes be sensational or inaccurate. This can mislead those who fail to read the whole article—or who see nothing but the headline, which is often the case on social media.

The consensus of sea ice researchers, from modeling based on physical understanding, is that the Arctic Ocean will become functionally “sea ice free” in the summer within several decades as it continues to decline.

I don’t think that either the headline or the opening paragraphs of the article give a fair reflection of what the scientific community as a whole has been saying about Arctic sea ice. Instead, it focuses on two individuals (Wadhams and Maslowski) whose extreme predictions have been routinely challenged by the rest of the community for many years. Essentially, the article relies on a strawman argument to create a story.

Although the body of the article does include comments by a number of scientists saying these views are outliers, by the time these are reached by the reader (if indeed they ever are!) the skewed view giving priority to Wadhams & Maslowski has already been established. The article does not make it clear at the outset that Wadhams and Maslowski are very much in the minority.

In my view, the article and headline are therefore misleading. They give readers the impression that the scientific community is making alarmist predictions of sea ice loss that have not come true. This is a completely false impression, and is damaging to the reputation of the climate science community.

Sarah Knapton has written a reasonably well-balanced article, however, this article was placed under a misleading headline. The headline could just as easily have been: “Experts said that simplistic extrapolations of sea ice loss had little predictive value—and they were right.”

The article in The Telegraph refers principally to projections made by Peter Wadhams that simplistically extrapolate from trends in minimum Arctic sea ice extent. These oversimplified projections, made without any underlying physical model, have been roundly criticized by the broader scientific community. In April of 2012, RealClimate had an excellent piece by Axel Schweiger, Ron Lindsay, and Cecilia Bitz, criticizing simplistic empirical curve fits for projecting sea ice loss.

It is unfortunate indeed that The Telegraph misled its readership with a headline that seemed to imply that most experts were wrong when, with the notable exception of a small number of outliers, the experts were right.

The experts were right in 2012 and they are right today. Arctic sea ice did not melt entirely in 2016, yet there is great concern for the future of Arctic sea ice, especially if our greenhouse gas emissions are not rapidly curtailed.

The headline misrepresents the article and the consensus views of experts. As the article eventually makes clear, the vast majority of experts disagreed with Profs. Wadhams and Maslowski about the future of Arctic sea ice when their forecasts were made. However, this important clarification is not made clear at the start of the article, which is what many readers will only read. The article also fails to effectively communicate the difference between a long-term trend and variability by comparing individual years of sea ice extent (2012 & 2016) in the text and graphically, even though later quotes highlight that this is not appropriate. In addition, one of the graphics used in the article to show ‘extent’ is mislabelled as ‘volume’ and also starts in 2006, ignoring the earlier data which would have showed the long-term decline. The article also misrepresents the majority of experts, who have said the ozone hole would recover eventually after CFCs were banned, but this is not stated and a non-expert reader might gain the opposite perspective.