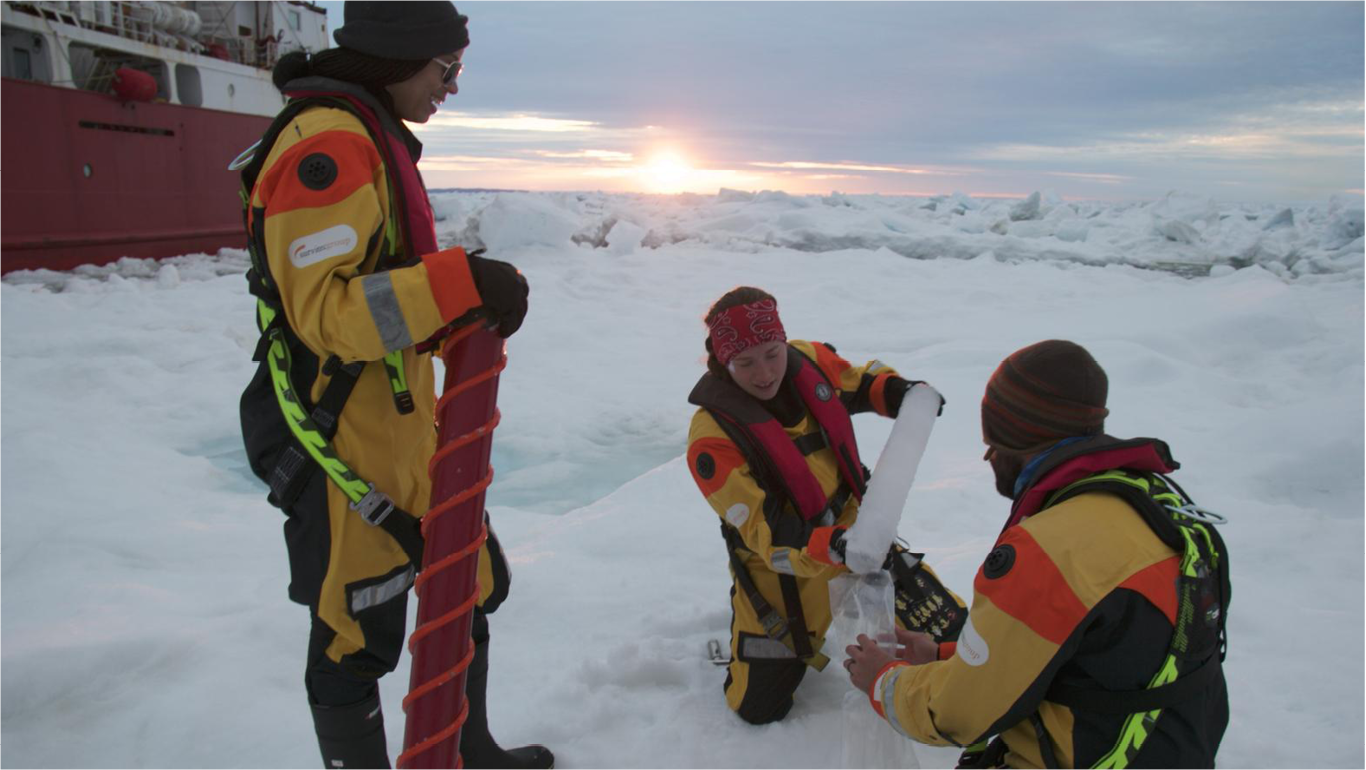 A June 12th Winnipeg Free Press story titled “U of M climate change study postponed due to climate change” describes a climate study delayed by unusual sea ice conditions around Newfoundland that necessitated the reassignment of an icebreaker vessel. (Similar stories were run by CBC News, The Guardian, and others.) It might seem to you that unusually thick local sea ice contradicts scientists’ predictions of declining Arctic sea ice cover, but that would be an overly simplistic and incorrect assumption. That misconception of both climate science and the behavior of sea ice has surfaced in the past when polar research vessels encountered difficulties with sea ice, and this time is (sadly) no exception.

Breitbart author James Delingpole wrote a misleading and derisive article about this story—shared over 200,000 times on Facebook—stating that “you’d almost think unseasonal bouts of snow and ice were nothing to do with ‘global warming’ but were a natural phenomenon”. InfoWars ran a similar story, adding a conspiratorial twist by claiming that climate change is “actually a globalist scheme to weaken the US economy”. One could argue whether scientists should pay any attention to such low-quality coverage, but unfortunately these were the top two stories on Wednesday June 14 in terms of social media reactions generated, so it is at least worth taking the time to re-explain how Arctic sea ice and climate change are related.

These stories may assume (either implicitly or explicitly) that sea ice conditions are tied directly and simply to global temperature. However, the conditions in any specific location are actually a function of many factors. Trends in polar atmosphere and ocean temperatures do drive long-term changes in sea ice cover (as shown in the video below), but short-term natural variability is very important, just as weather is naturally variable. Additionally, sea ice is transported around by winds and ocean currents—controlled by persistent regional patterns as well as temporary effects like storms. (See, for example, this recent satellite imagery.)

This means that sea ice conditions can change rapidly in some places, with a dense sea ice pack forming due to a few days’ weather conditions.

The magenta line shows the average position of the ice edge between 1981 and 2010. Source: NSIDC

Additionally, Arctic and Antarctic sea ice differ strongly. Sea ice rings Antarctica, frozen by cold air blowing outward from the ice-covered continent. Sea ice in the Arctic, on the other hand, forms in the middle of the Arctic Ocean and grows outward towards the land masses. Differing regional ocean and atmospheric temperature patterns, as well as wind patterns, lead to significant differences in the way sea ice behaves.

Scientific projections of future sea ice cover are, therefore, also different in the Arctic and Antarctic. Arctic sea ice is projected to decline markedly in the coming decades, but natural variability is still expected to continue to be important. The fact that the volume of Arctic sea ice is decreasing as the world warms certainly does not mean that local sea ice conditions will never again be treacherous for ships.

In the case of the story covered by the Winnipeg Free Press, sea ice transported southward collected in an area near Newfoundland, trapping several fishing vessels. The researchers’ icebreaker headed for Hudson Bay was called in to assist in the rescue of the ships. The research vessel was then unable to continue until another suitable icebreaker could replace it, at which point there was not enough time left to continue on to Hudson Bay. 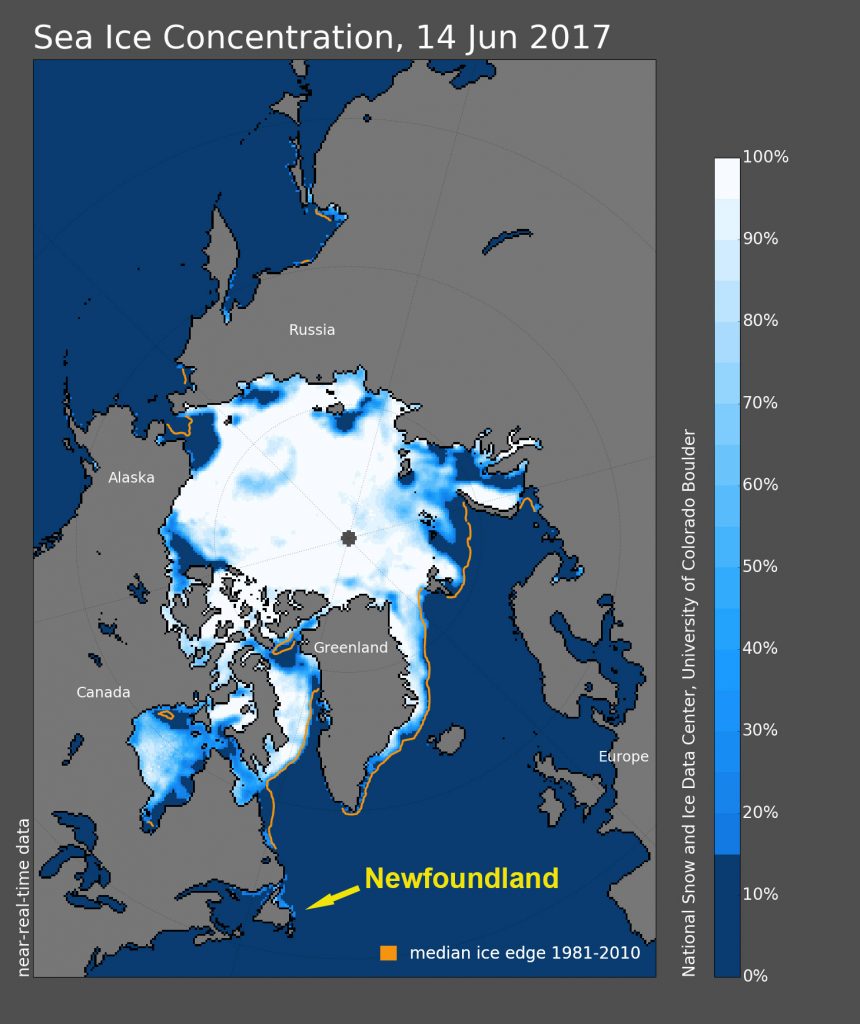 “The ice we examined consisted of level multiyear [in age] floes in excess of 5 meters and rubble and ridged areas in excess of 8 meters thickness. Salinities and temperatures confirmed these were multiyear ice floes. This type and concentration of ice is not expected at these latitudes and time of year, and its presence created many search and rescues, ice management, and ice escorts for fishing vessels and tankers trying to operate in the area. Our own studies1, and many others, have shown a strong warming of the atmosphere in the high Arctic (+3 to 4°C on average relative to norms). This warming has reduced both the thickness and concentration of sea ice in the Arctic (also well documented scientifically). This in turn has created a situation where the multiyear ice still remaining in the high Arctic is much more mobile than it used to be. There are lots of peer reviewed papers2, 3, 4, 5, 6 which show this increase in velocity both at the local and regional scales. The ice we observed came from one of these high Arctic sources and made its way into the Labrador current and travelled all the way south to Newfoundland. The fact that this ice made it that far south is something that planners and policy makers need to be concerned about, and something we in science will continue to study—both for understanding the processes driving this [transport] and being able to make predictions about when and where we can expect these types of ice hazards in the future.”

The Breitbart article, which a University of Manitoba press release described as “stunningly ill-informed”, fails to acknowledge the scientific and physical complexities of reality—that “global warming” doesn’t mean every inch of the Earth’s surface will be warming at every moment or that every speck of ice has melted away. It is unfortunate that the Breitbart author misinformed over 200,000 readers on Facebook with a simplistic and shallow article instead of seriously engaging with trying to understand and explain the facts.

NASA Goddard Space Flight Center Postdoctoral Associate Alek Petty explained that while he would need more information to understand the cause of this specific sea ice event, the Breitbart article makes an unsupportable conclusion:

“It’s not completely obvious to me that this specific event was caused by, or indeed made more likely due to climate change, although it’s clearly not an indicator that the opposite is true, as the Breitbart article seems to be alluding to. I’m unsure if such a flow of thick ice into the area is indeed unprecedented (over some time period), but that seems plausible. The event described is a complex one, and is worthy of a more in-depth discussion than can be provided in these short media articles, in my view. The statement that Arctic sea ice is thinning and becoming more mobile is valid, however, and indeed represents a key indicator of the Arctic’s response to climate change.”

Image at top courtesy of University of Manitoba