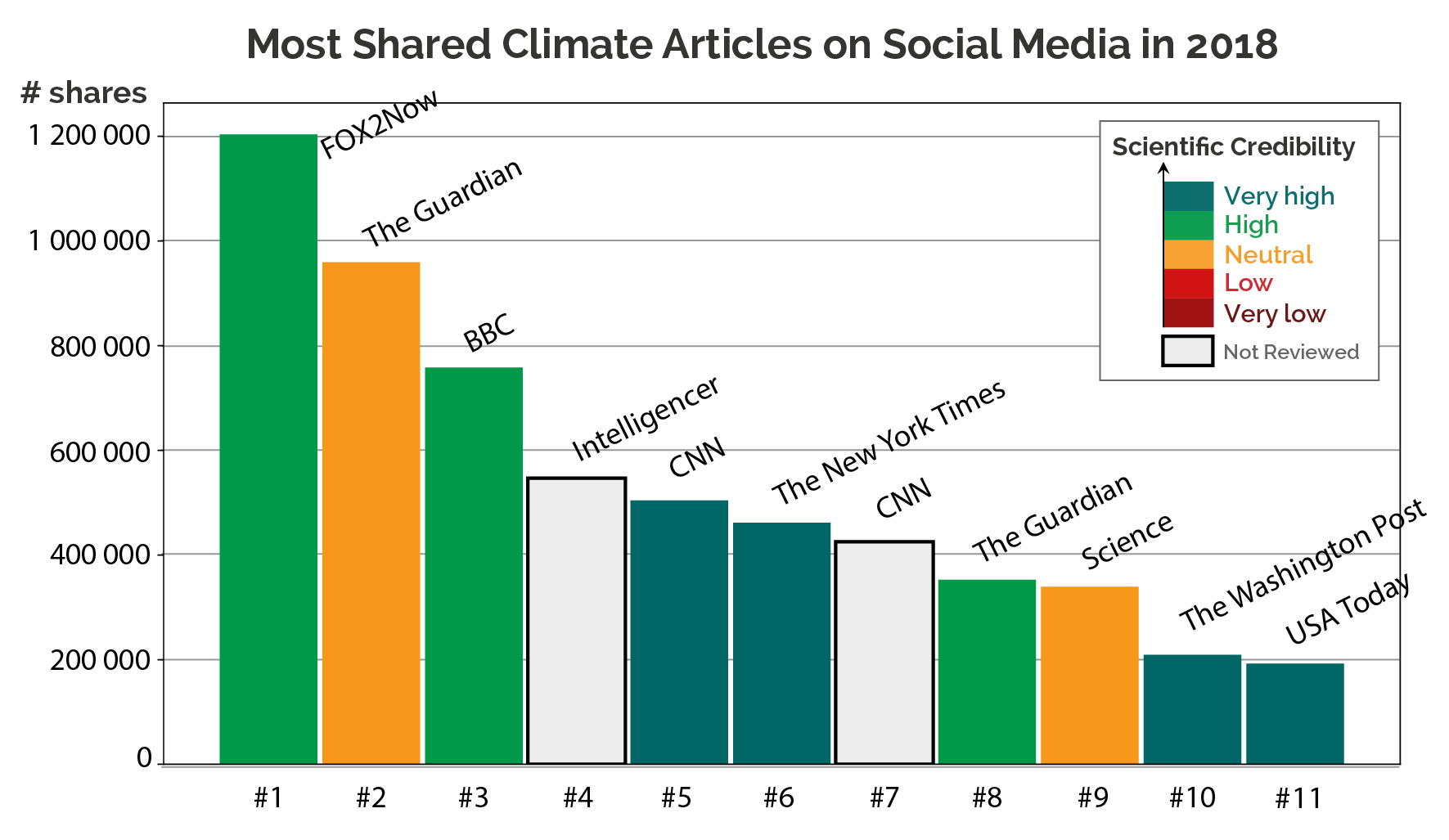 To investigate whether last year’s most “viral” climate change stories misled the people who read them, we asked scientists to evaluate a list of top articles (as we did last year). In November, we searched Buzzsumo for the climate articles[1] with the most shares and interactions—as many as 1.2 million in the top spot—selecting the top 10 that focused on verifiable statements about climate science. (One more story entered the list in December.) Two stories did not receive any reviews, but all the evaluations and comments we collected can be found below.

Compared to last year’s top 10, there is a notable lack of low credibility stories. Two stories garnered mixed reviews from scientists. In one case, this was an article detailing false claims about sea level rise made by politicians, in which some reviewers felt the article simply wasn’t clear enough in its corrections. But there were no articles from partisan outlets presenting inaccurate rejections of climate system at the top in 2018. Instead, the list was dominated by major news outlets—with the exception of the top story, which was published by the local FOX station in St. Louis.

This leads to an interesting question we unfortunately cannot answer at this stage: is this improvement in the credibility of the most-shared articles the result of recent changes to social media algorithms or just chance?

Almost half of the stories in this list cover major IPCC and US National Climate Assessment reports released last year. It also seems clear that people are interested in learning about (or commenting on) the environmental impacts of diet. The #4 story of 2017 was about the greenhouse gas emissions associated with beef production, and two of 2018’s top stories are on the same topic.

Several of the remaining stories featured dramatic headlines on events related to climate trends—things like winter warm spells at the North Pole or the 400th consecutive month warmer than the 20th century average. The most popular story (titled “NASA releases time-lapse of the disappearing Arctic polar ice cap”) was actually an article on the 2017 global surface temperature ranking that included a NASA animation of Arctic sea ice changes over the years. 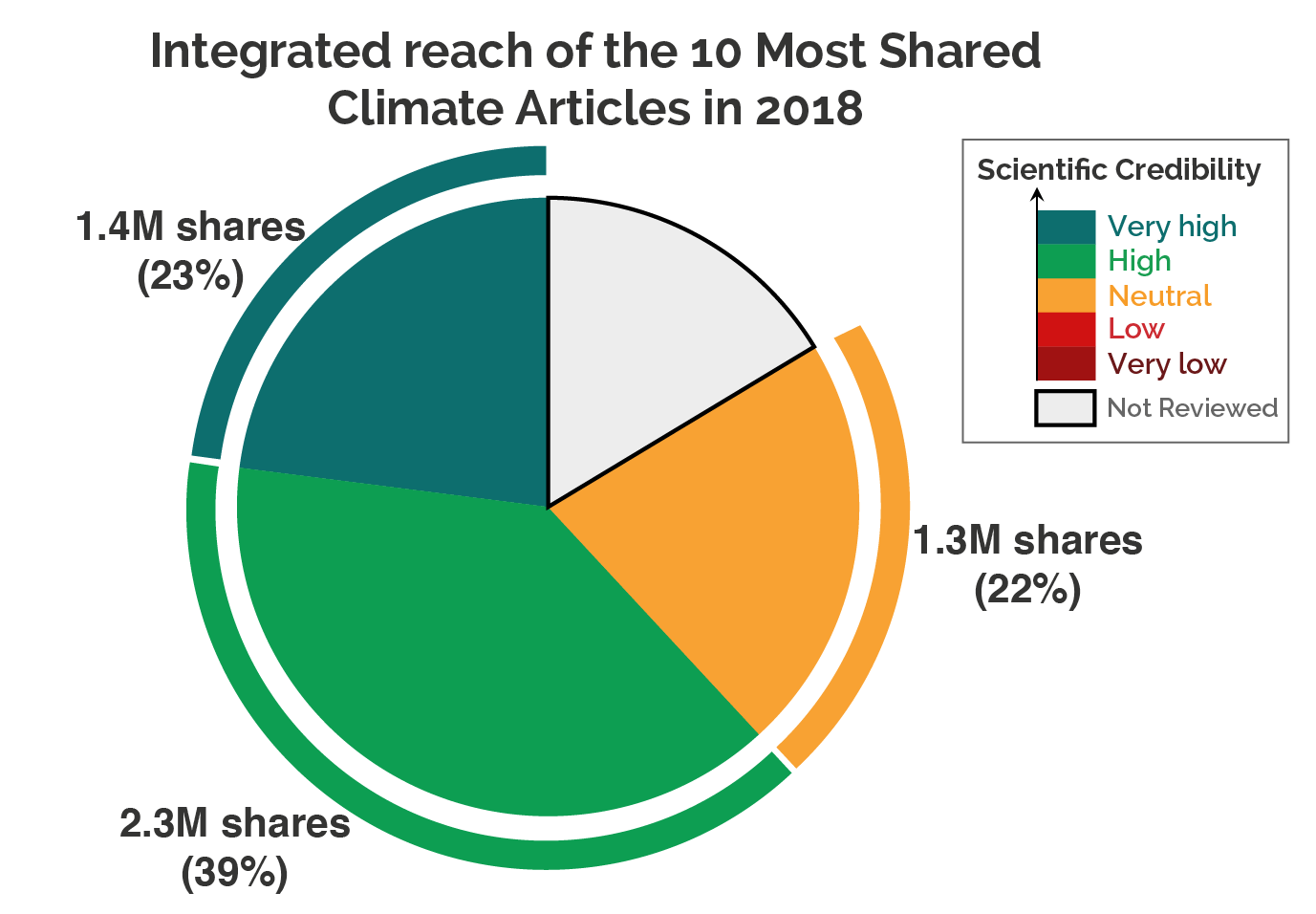 Take a look at these stories, and see what scientists had to say about them. 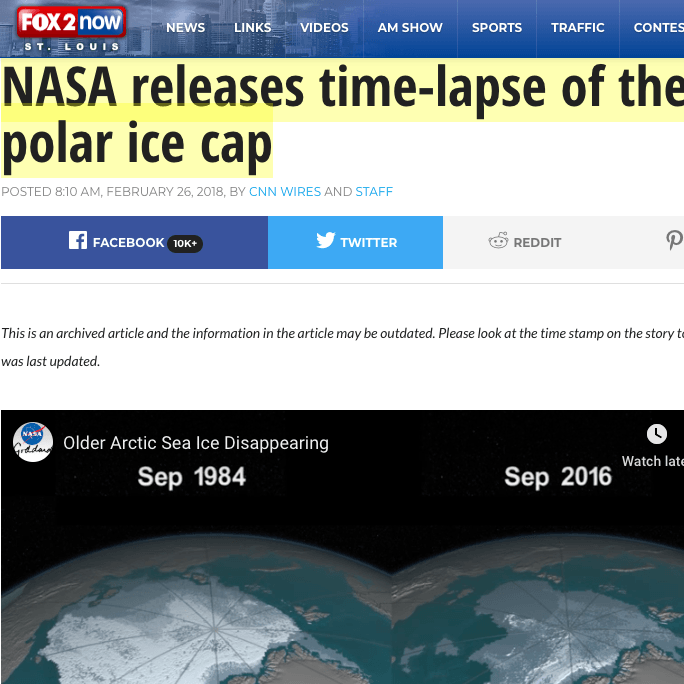 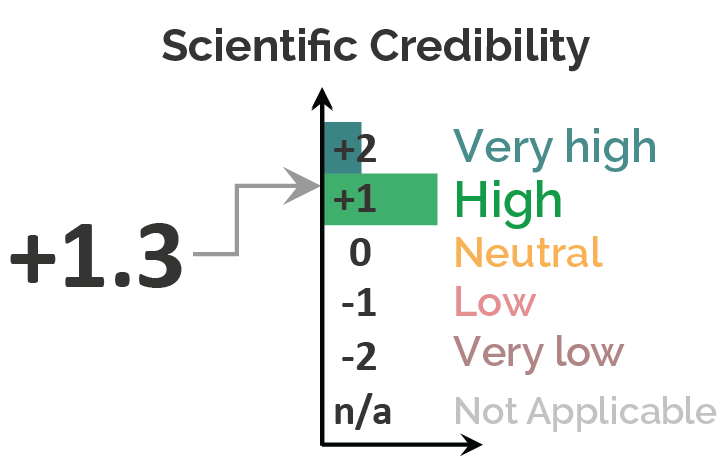 The article is factually correct. The reality that Arctic sea ice is getting younger [rather than surviving for several years and growing thicker] is not so well known from the public, so such an article is welcome.

The article’s title and the front video are about sea ice, but most of the rest of the text is about global temperatures. There has been clear evidence that the two (rising temperatures and declining sea ice) are linked on long time scales (say, >15 yr), but interannual fluctuations of the latter are more difficult to formally relate to the former.

Caroline Holmes, Polar Climate Scientist, British Antarctic Survey:
The article is credible and the overall message/insight conveyed to the reader is accurate.

However, the reader could be easily misled on some details because some of the values quoted are given with insufficient information and without traceable sources. (The 2017 temperature anomaly quoted is relative to 1951-1980. The Arctic sea ice ‘second lowest’ refers to the annual mean.) 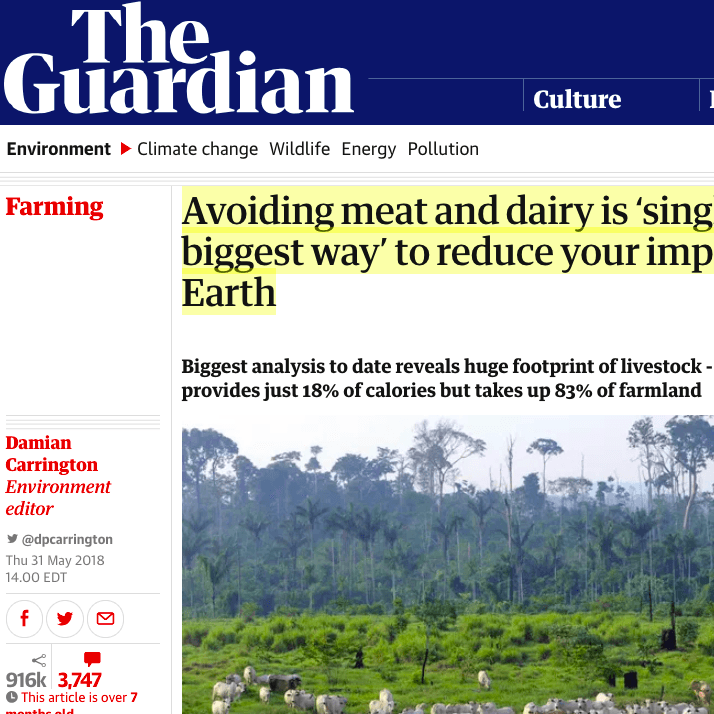 Published in The Guardian, by Damian Carrington on 31 May 2018 Harry Aiking, Associate Professor, Vrije Universiteit Amsterdam:
The word “Avoiding” in title and text is overly strong and should have been “Reducing”. Adopting a vegan diet is not necessary, but a reduction to having meat 1-2 times a week and dairy 3-4 times a week would suffice. In fact, flexitarian diets utilize natural resources much more efficiently than vegan diets[1]. In the article, Peter Alexander is quoted saying something to the same effect.

The underlying Science paper by Poore & Nemecek is using life cycle assessment. Life cycle assessment is an inherently arbitrary bookkeeping method and potentially misleading. Its caveats take a lifetime to fathom and some can and should be made explicit to lay people. To mention just one example out of many, expressing units per kg live weight, dry weight, or protein (or even cost, using economic allocation) makes a tremendous difference. As an illustration, try to compare cheese and milk. Such cautionary advice is lacking entirely.

More importantly, the main figure in this story is presented with the wrong units. The data on greenhouse gas emissions per unit of different food is reported in Poore and Nemeck as emissions per “100g of protein” from each food type, a critical distinction. It is also rather misleading (and confusing) to present the 90th percentile value as a datapoint and use that 90th percentile value as the reference (i.e., the comparison used in the figure title). Poore and Nemeck report means for all of these values: this would be a much more appropriate value to be reporting here. 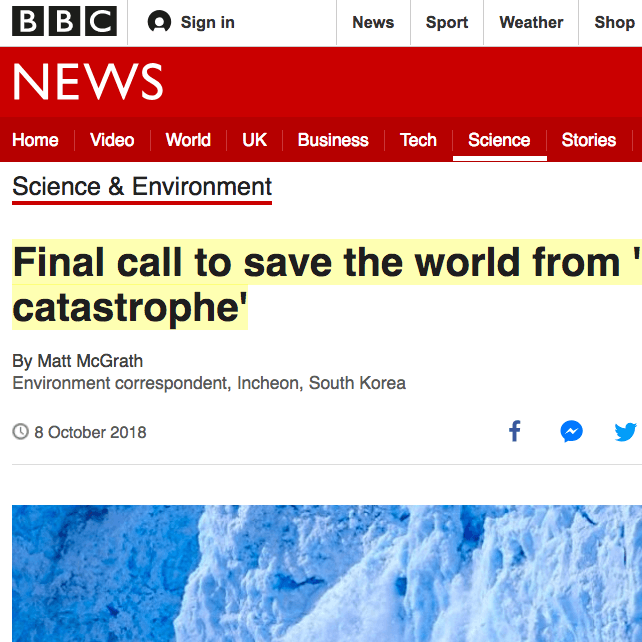 Final call to save the world from ‘climate catastrophe’ 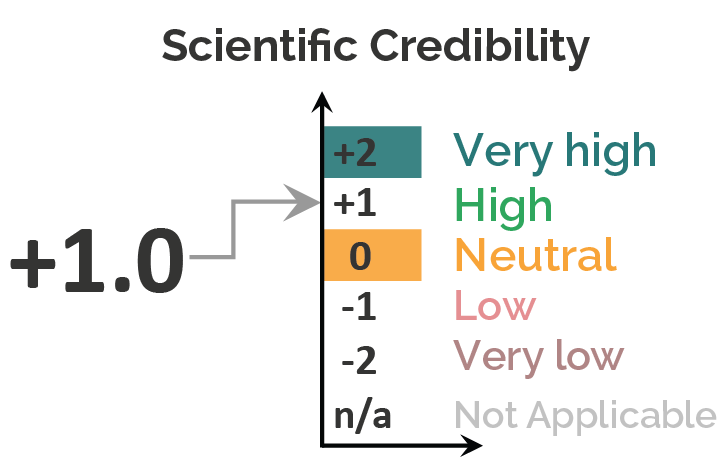 Joeri Rogelj, Research Scholar, International Institute for Applied Systems Analysis (IIASA):
Scientifically, the article is overall correct, but it is in cases inaccurate in its description of certain aspects of the IPCC. For example, the IPCC does not conduct research, but assesses the available scientific evidence.

The article also provides statements without context, despite this being essential for their interpretation. For example, the annual investment needs in the energy sector for achieving a 1.5°C compatible pathway are indeed roughly 2.5% of global GDP, but this compares to about 1.8% of global GDP in a world in which we put the world on track for 4°C by the end of the century. The difference in investments is also roughly an order of magnitude smaller than the annual percentage of GDP we spend on energy. The absence of this context makes it impossible to judge whether the editor’s value judgment that limiting warming to 1.5°C would be “hugely expensive”. 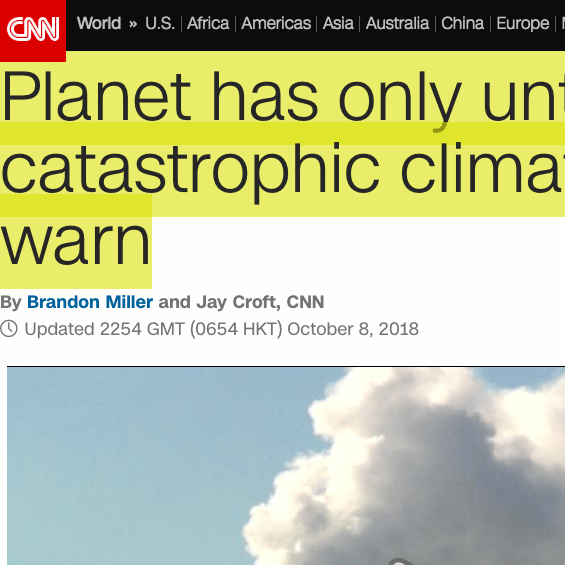 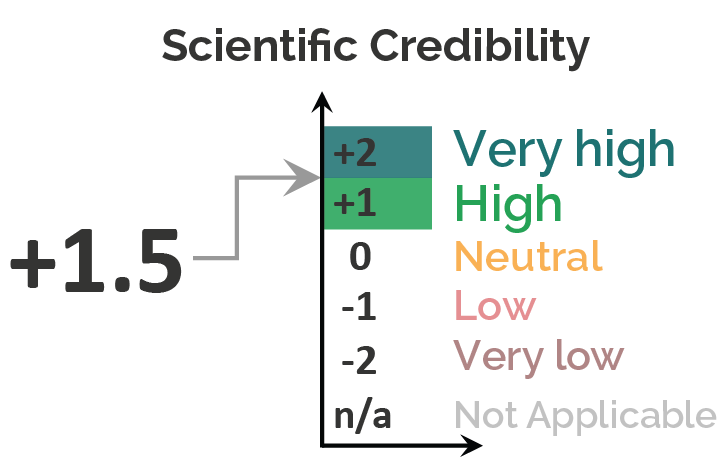 This CNN story covered the October release of the IPCC’s “Global Warming of 1.5 °C” report. The report, which was requested by governments during the 2015 Paris Agreement negotiations, details the impacts of 1.5 °C compared to 2 °C and the emissions cuts required to limit warming to either of those levels.Scientists who reviewed the story found that it conveyed the information in the report without any errors, and included comments by scientists to summarize the report’s implications. Published in in The New York Times, by Coral Davenport on 7 Oct. 2018

Andrew King, Research fellow, University of Melbourne:
The article accurately summarises the IPCC special report on 1.5 °C of global warming. The article represents the key findings of the report and does well at highlighting the impacts of 1.5 °C global warming and discussing the difficulty in limiting warming to this level.

Stephen Po-Chedley, Postdoctoral Research Fellow, Lawrence Livermore National Laboratory:
This article was based on a UN Report regarding the impacts of climate change for 1.5 degrees C of warming. This was a very comprehensive article, demonstrating the broad range of risks that climate change poses, the scale of the action needed to mitigate climate impacts, as well as the roadblocks to action on climate change. In general, the article did a good job surveying aspects of a large UN report. The article was overwhelmingly based on the science and evidence from the underlying UN report, but would have benefited from additional context for statements that claimed that climate impacts are more dire, are happening more rapidly, or with less global mean warming than previously thought. 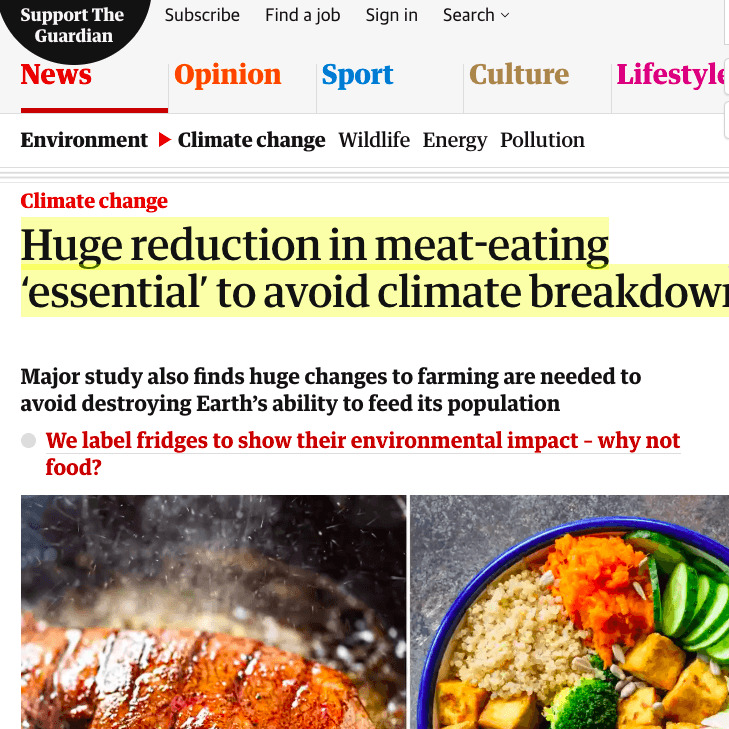 Published in The Guardian, by Damian Carrington on 10 Oct. 2018 Hugo Valin, Research Scholar, The International Institute for Applied Systems Analysis:
The article provides a rigorous assessment of the overall threats to the climate and the planet, as we are getting towards the challenge of feeding a 10 billion global population. Change in diets will be required due to the high impacts of the livestock sector, but this is not the only lever to use to relieve the level of pressure, and the Nature study also heavily emphasizes the role of technical change, which is less prominent in the Guardian piece. It should also be reminded that most reductions of emissions on non-CO2emissions from livestock will be needed in developing countries (75% of ruminant emissions, 56% of monogastrics in 2000, see Herrero et al1). Therefore, reducing consumption in rich countries will only have limited impacts if developing countries do not join the efforts. The “flexitarian” diet is also certainly a more promising way forward than a vegan diet, due to nutrition balance considerations, and cultural barriers towards stopping animal based products consumption.

The alarming tone could gain to be balanced with the diversity of challenges across different geographies, the role that technology could play to alleviate some adverse impacts, and the fact that climate mitigation in agriculture does not operate in isolation with other sector climate policies, which means the climate mitigation burden could be transferred across sectors and geographies to make the 1.5 or 2 degree C targets bearable for the food and agricultural system without jeopardizing food security2. Published in E&E News, Science Magazine, by Scott Waldman on 17 May 2018 Andrew Shepherd, Professor, University of Leeds:
The article itself is I believe a well-intentioned attempt to report on what seems to have been a rather chaotic committee meeting; although the meeting topic was intended to be on technologies to mitigate climate change, the discussion concentrated on basic climate change principles and conjecture which the witnesses could reasonably have not expected.

Although the article is good in places, I have graded it as very low credibility because there are several committee member statements that are false and not adequately corrected in the printed article.

Keven Roy, Research Fellow, Nanyang Technological University:
This article is mostly a descriptive depiction of an exchange between some members of the Space, Science and Technology Committee and a climate scientist. The comments from the members of the Committee suffer from severe inaccuracies and misconceptions, and citations of the invited climate scientist mostly address those issues.

In general, the views that go against our understanding of the climate change process are underlined and presented as such by the author, but rarely supported by statements or explanations that go beyond the immediate replies from the invited climate scientist. Some of the inaccurate statements quoted in the text are thus left with an incomplete challenge. In particular, the concluding statement should have been challenged. The explanations sometimes suffer from imprecise language (land/sea ice, sea level rise timescales) but they are usually adequate. North Pole surges above freezing in the dead of winter, stunning scientists

Published in The Washington Post, by Jason Samenow on 26 Feb. 2018 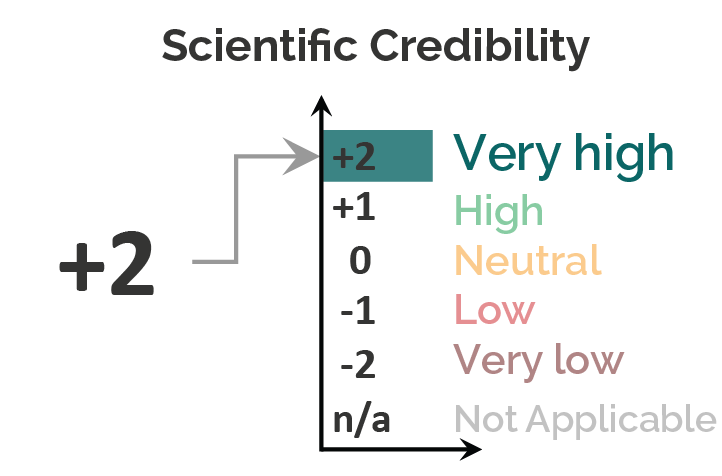 This article in The Washington Post describes a pattern of unusually warm weather in February 2018, during which the North Pole saw above-freezing air temperatures. The article also places this event in context of past weather variability, explaining that there is an increasing trend of warm temperature extremes.

Scientists who reviewed the story found that it covered both of these points accurately. The trends are correctly identified without exaggeration, giving readers an accurate understanding of what the data show.

Kelly McCusker, Research Associate, Rhodium Group and Climate Impact Lab:
This article accurately describes the Arctic warming event and associated surprise by scientists, includes multiple explanations for possible causes, and does not overstate any connections to climate change, pointing out that more data is needed to know if these above-freezing events will be a new Arctic normal. Andrew King, Research fellow, University of Melbourne:
This article does a good job of summarising the extended run of global-average temperatures above the 20th century average. The article correctly attributes the cause of this extended run of global warmth to human-caused greenhouse gas emissions.

Peter Thorne, Professor, Maynooth University:
The piece accurately reports the surface temperature record warming of recent decades and joins the dots appropriately to the underlying cause of human emissions. It appropriately draws the distinction between regional/national records and the global mean behaviour. The included quotes are to authoritative sources.