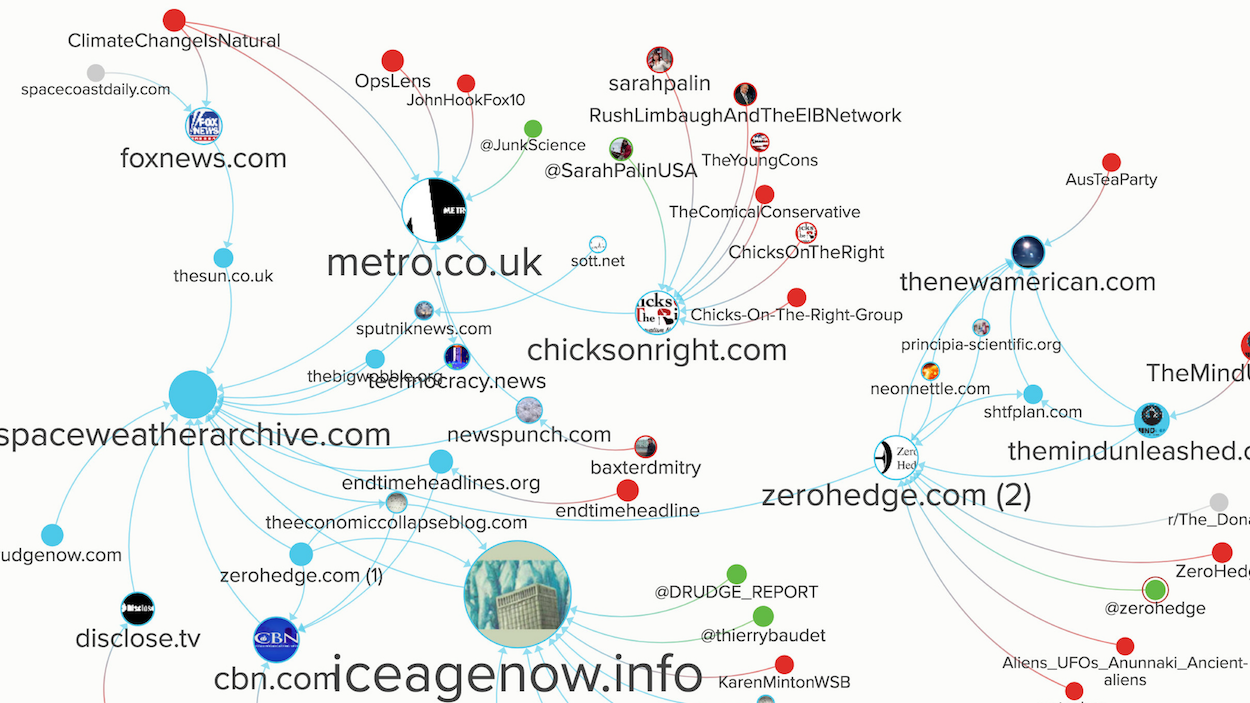 Recently, a claim that we are heading towards a mini ice age has been popping up across the web. This was the subject of a widely discussed Metro article titled “A mini ice age could be on the way which means it will get very, very cold”. Similar claims that we would be heading towards an imminent “mini ice age” were also repeated without verification throughout a network of unreliable outlets for climate news including Sputnik, The Sun, Fox News, and numerous hyper-partisan blogs such as Zero Hedge, Principia Scientific, IceAgeNow, Alien-Star… (listed in the table below).

The stories claim to be based on a September 27th article at Space Weather Archive, in which NASA scientist Martin Mlynczak discusses the influence of current low solar activity on the Earth’s thermosphere—a layer of the atmosphere that begins about 65 miles above the surface. Mlynczak explained to Climate Feedback that headline claims of coming cold weather are “false”:

There is no relationship between the natural cycle of cooling and warming in the thermosphere and the weather/climate at Earth’s surface. NASA and other climate researchers continue to see a warming trend in the troposphere, the layer of atmosphere closest to Earth’s surface.

Claims of an imminent “mini ice age” linked to solar activity appear frequently at certain outlets, as they make for attention-grabbing stories that purport to contradict projections of human-caused climate change. Scientists have debunked similar statements in the past: see this July 2015 review of a Telegraph article titled “Earth heading for ‘mini ice age’ within 15 years” and this review of a claim made in a booklet by the Heartland Institute aimed at children in the US titled “A lull in solar activity would have little effect on global temperatures…”.

It is useful to note some common failures in these stories, which illustrate why the outlets publishing them are unreliable sources of information about climate change:

All these reports take the source quotes out of context, creating a new and misleading meaning. It would have been easy for any of these authors to contact the scientist and verify that they are interpreting his findings properly, as we did and science journalists do as a matter of routine professional practice.

2) Use of imprecise language:

Few of these stories explained that the cooling discussed was occurring in the thermosphere—much less what the thermosphere is. And by using terms such as “mini ice age”, they lead readers to think the scientist’s quotes refer to surface temperatures. For example, people who read that “it’s going to get very, very cold” are certainly not going to immediately guess that “it” is the thermosphere.

Responses to these stories on social media make it clear that the message many readers took away is completely inaccurate. The Facebook page ‘Climate Change is Natural’, for instance, shared the Metro article with the accompanying comment:
“Humanity is facing a long, cold winter which could see temperatures across the planet plunge to depressing lows. According to a NASA scientist…”

These stories are also being used to claim that global warming has stopped. For instance, a blogger (Steve Milloy) commented on Twitter while sharing the Metro article: “Nature poised to compel an end to global warming hysteria?”, while a Fox 10 News anchor commented, “I thought we were heading for apocalyptic global warming? These guys can’t seem to make up their minds…” 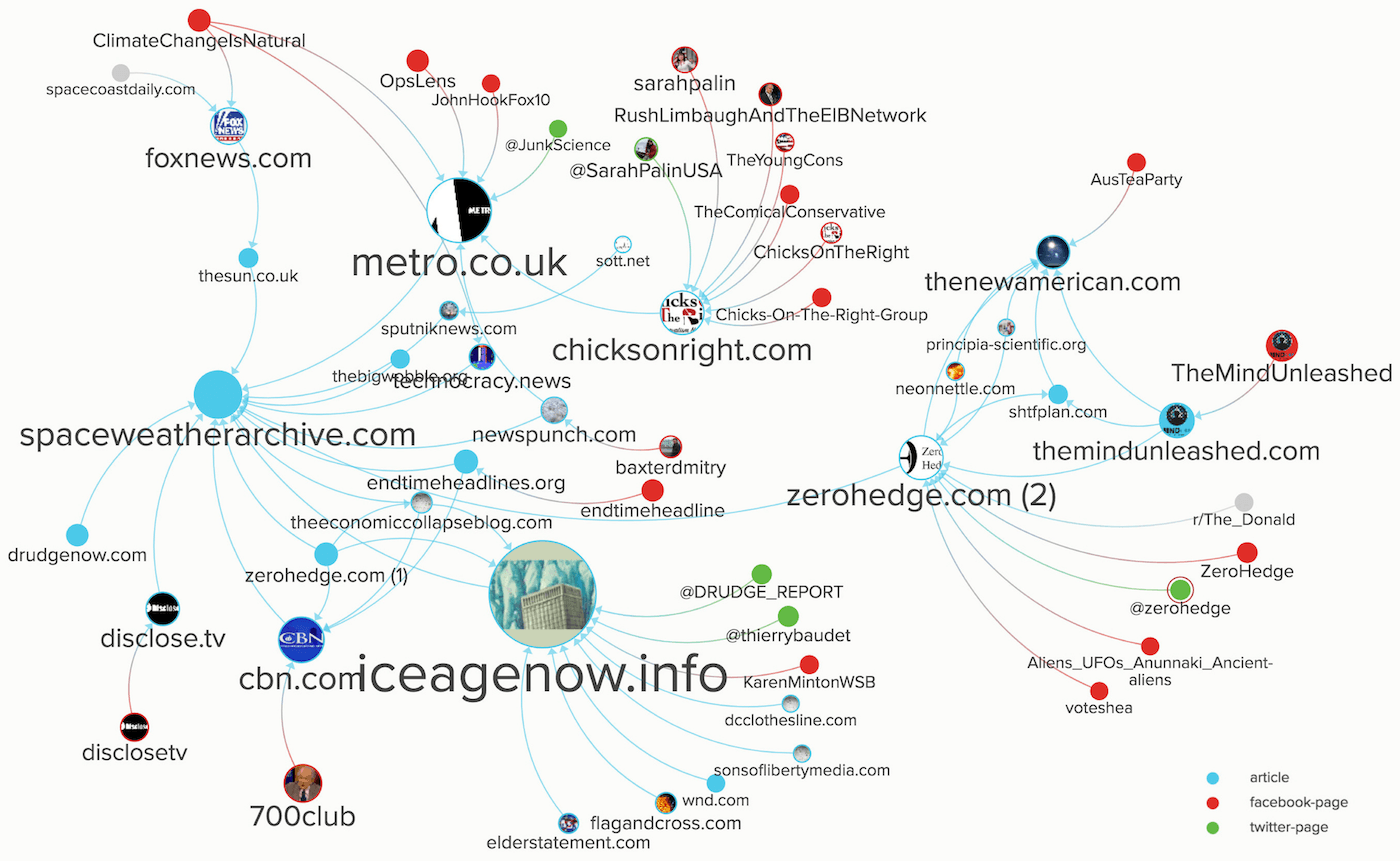 Figure – The network of outlets, blogs, and social media profiles who have shared and endorsed the claim that an imminent “mini ice age” would be coming based on a misinterpretation of the original article at Space Weather Archive. Dot sizes are proportional to the total number of shares and interactions on social media; arrows represent citations from an article/social media profile to its source.

These stories have also spawned junk videos on YouTube. This video, which has gathered more than 13,000 views as of writing seems to be read word for word from the Zero Hedge article, for example. YouTube readily recommends a host of similar videos wrongly claiming that a mini ice age is coming (e.g. this video that has been seen nearly 430,000 times or this one with 215,000 views).

The articles have been shared more than 130,000 times on social media, with 90% of those occurring on Facebook. This illustrates how a host of blogs and online news sources all repeated false information without verification, which is then promoted to millions by influential Facebook groups and Twitter individuals, including American politicians like Sarah Palin.
Unless some readers investigated further, searching for the origin of Martin Mlynczak’s quotes and learning more about the topic, all of those people were fundamentally misled by these wildly inaccurate stories.

Table – List of the most shared articles repeating the false claim that an imminent “mini ice age” would be coming. Data from buzzsumo.com