Early last month, British tabloid the Daily Mail published an article accusing the former director of the National Oceanic and Atmospheric Administration (NOAA) of rushing to publish “faulty data” so as to “influence the historic Paris Agreement on climate change.” The article was based on allegations of disregarded data handling procedures in a 2015 study by Karl et al., which showed that the apparent warming slowdown in the early 2000s was likely at least partly attributable to data issues. The Daily Mail article inflated one past NOAA employee’s complaints of disregarded data handling procedures into a full-blown scandal involving accusations of purposeful data manipulation, which have been verified by Climate Feedback as unsupported allegations. The NOAA employee (John Bates) later confirmed in an interview for E&E news that there had been “no tampering with data” nor alteration of scientific results, and that his concerns were regarding adherence to agency protocols for the publication of data.

Climate Feedback compiled a list of all the articles that commented on the Daily Mail article and that were shared more than a thousand times on social media (according to Buzzsumo); see figure above. In total these articles have been shared on social media more than half a million times! After we analyzed how various media outlets disseminated the Daily Mail allegations, we found their articles fell into 4 broad categories: 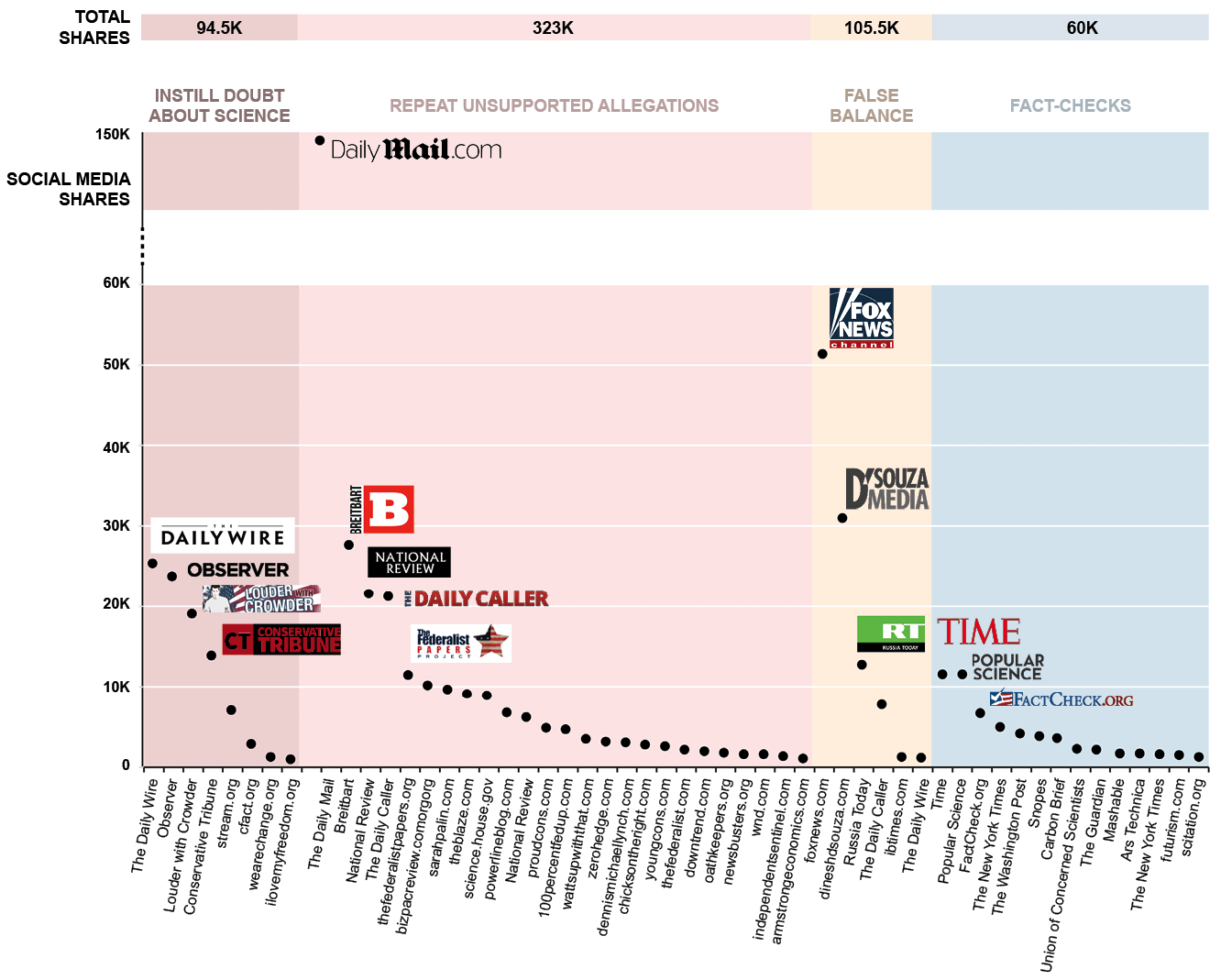 Figure  —  Total number of social media shares according to Buzzsumo (as of Feb 8, 2017) for all articles with more than 1k shares linking to or repeating the Daily Mail story on alleged climate data manipulation

First, some outlets (labeled ‘repeat unsupported allegations’ on the figure) like the Daily Caller, Breitbart and the National Review, for instance, either simply copied and pasted the original article (e.g., 100percentfedup, Zerohedge) or largely repeated the Daily Mail allegations without further addition or fact-checking.

A second category of articles (labeled ‘instill doubt about science’) repeated the misleading claims from the original article and went further to express doubt about the reality of global warming itself, while the original story actually did not present any evidence supporting that. For instance, the Daily Wire included a link to the Daily Mail article and argued that the article proves that climate change is a hoax, concluding that “[T]he hoax that is Climate Change has once again been debunked.” Another outlet, Louder With Crowder, proposed a similar conclusion, suggesting that “if ever you needed proof that climate ‘scientists’ will do anything to push their agenda, this is it…. But hey, look on the bright side. At least global warming isn’t a thing…”. Similarly, The Conservative Tribune used its coverage of the story to suggest that “…Bates’ claims only add more evidence that global warming is a myth …”.

A third category of articles (labeled ‘false balance’) — including articles from Reason, Russia Today, and Fox News — repeated the Daily Mail misinformation but included quotes from additional scientists speaking about the affair. However, these articles were found to provide little explanation allowing readers to understand that the Daily Mail allegations did not actually represent the scandal the original article portrayed.

Finally, a fourth group of articles were found to actually attempt to verify the claims of the Daily Mail by relying on original reporting (labeled ‘fact-checks’ on the figure). Timemagazine, for instance, found that “the writer used the familiar tactic of taking an obscure scientific point … and pretending that it discredits climate science itself. This is like calling your diet an abject failure because one scale says you lost 39 pounds and another says you lost 40.” Carbon Brief published a detailed analysis by Dr Zeke Hausfather and found that the “‘astonishing evidence’ that David Rose purports to reveal in no way changes our understanding of modern warming or our best estimates of recent rates of warming.”

Misinformation like that initiated in the Daily Mail article can reach millions and confuse citizens by creating stories that distort reality. Not only do hundreds of outlets propagate the misinformation like in an echo chamber, some even use it as an opportunity to push their own predetermined story denying the scientific reality of climate change. And while other outlets performed their journalistic duty verifying the veracity and actual implications of the allegations, their combined reach on social media was about 10 times smaller than the reach of misinformation.

The World Economic Forum has called widespread digital misinformation one of the main threats to our society, highlighting how the spread of misinformation on such a scale is favored by social media. Social media platforms like Facebook — where about 80% of the shares occurred in this case — have a responsibility to ensure their users have access to reality-based information when they have been otherwise misinformed on their platform.