Three scientists analyzed the article and estimate its overall scientific credibility to be 'very low'. more about the credibility rating
A majority of reviewers tagged the article as: Cherry picking, Flawed reasoning, Inaccurate, Misleading. 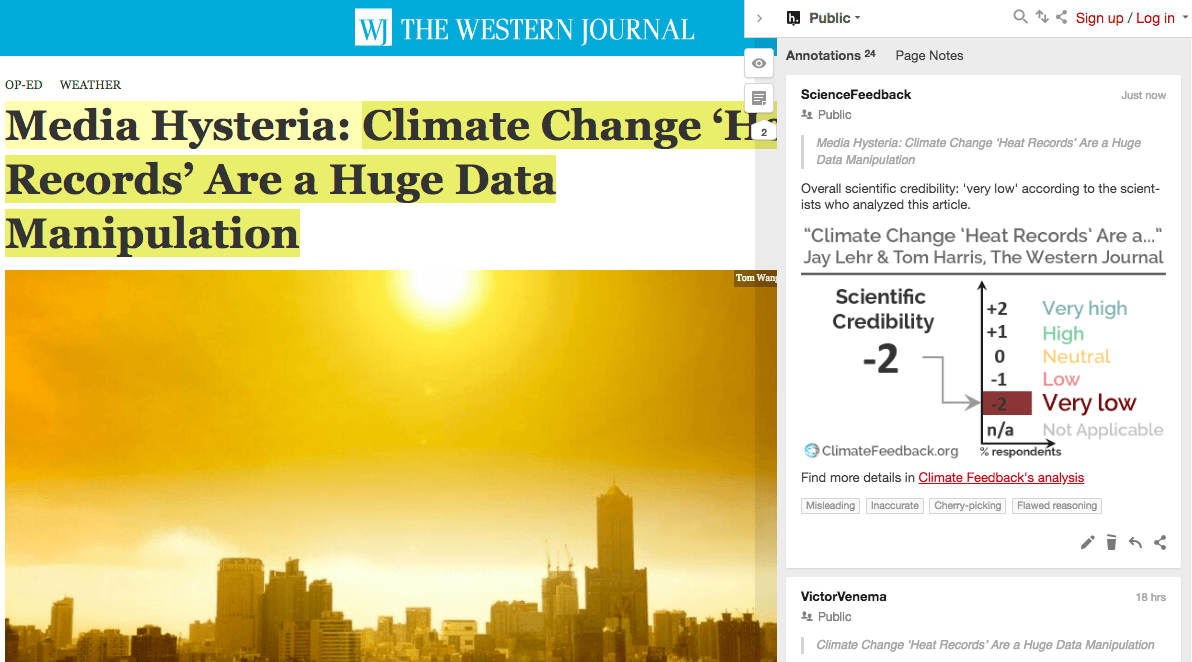 Scientists who reviewed the article found that it provided no support for any of its claims, which contradict existing research and data analysis.The argument it attempts to make suffers from flawed reasoning, pretending that a cold record at some location decades ago would mean that the last few years of global average temperatures haven’t been the warmest on record.

The reviewers indicated that the content of the article does not support its headline.

UPDATE (26 February 2019) The Western Journal has retracted this op-ed, providing the following message in its place: “This Op-Ed has been retracted for failing to meet The Western Journal’s Editorial Standards. After publication, a number of factual claims made in the Op-Ed were determined to have been untrue. The decision was then made to retract the piece. Before we had done that, questions were raised about the methodology used by its authors to reach their conclusions, but because the decision to retract had already been made, The Western Journal did not investigate the validity of those questions. We note them here only for the record.
We apologize for publishing material in violation of our Editorial Standards of factual accuracy and for any confusion we might have caused by doing so.”

You can read an archived copy of the op-ed here. You can also install the Hypothesis browser extension to read the scientists’ annotations in context.

Peter Kalmus, Data Scientist, Jet Propulsion Laboratory:
This is one of the most scientifically inaccurate articles I have ever seen. The authors, apparently intentionally, provide false information and engage in extreme cherry-picking to mislead the public about climate change.

Victor Venema, Scientist, University of Bonn, Germany:
The authors do not even write about, let alone provide any evidence for, the data manipulation claim in their headline. They even admit themselves that their home-brew way of studying changes in extremes is really bad. If I were paying their salaries, I would want my money back.

This is the biggest and most ludicrous claim of the article—the claim that will be read most and shared most on social media—and the article provides no evidence the data was manipulated.

The idea that climate change is producing heat records across the Earth is among the most egregious manipulations of data in the absurd global warming debate.

Just to be clear, the main claim of climate science is that the global average temperature is increasing. The increase of heat waves is one of the many consequences of this.

The article confusingly uses the term “record” in two meanings. The term records can be used for the observations that were recorded by meteorologists over the last centuries. The term “records” is mostly used for the highest or lowest value ever seen. In an article about the highest and lowest temperatures, it is best to avoid using the term records for the recorded data.

With all the extra variability in the local daily records the authors can easily cherry pick a few data points that fit their narrative. What would make their case stronger would be if they actually analysed all the data, engaged with the existing scientific literature and made their own contribution to our scientific understanding by publishing a scientific paper. The cherry picking exercise in this Western Journal article does not contribute to our scientific understanding of the world.

On Feb. 7, several major newspapers carried stories of the declaration by NASA and NOAA that the past five years have been the warmest on record.

This is a claim about the global mean temperature and an accurate one: the last five years are the five hottest years for the period for which we have instrumental observations and likey much longer.

Sadly, these supposed experts use mathematical equations that do not jibe with reality over the past 140 years.

Experts tend to use mathematical equations.

If the authors would like to claim an equation is wrong, they should state which one and provide a source. Otherwise it is just hot air.

I would like to see the authors to provide the “mathematical equations” to which they refer.

The same climate experts warn that record heat is just the tip of the iceberg.

Victor Venema, Scientist, University of Bonn, Germany:
That is true, climate change causes many other problems for humanity*.

Actual weather records over the past 100 years show no correlation between rising carbon dioxide levels and local temperatures.

Science only claims a relationship between carbon dioxide levels and the global temperature. Still, it would be nice if the authors would provide a source for their claim.

Did the Earth experience its highest temperature ever this year? The answer is no.

Does this have any significant bearing on the steadily increasing ocean heat content and annual mean global surface temperature? The answer is no.

The coldest temperature ever reported was 129 degrees below zero Fahrenheit in Vostok, Antarctica, in 1983, when Carbon dioxide emissions were five times higher than in 1913.

In 1913 there was only one official research station in Antarctica. It was on Laurie Island in the middle of the Southern Ocean.

Vostok Station was founded close to the South Pole by the Soviet Union in 1957. With the spread of weather stations the chance of a low record increases. This may be the clearest way to show that just mentioning a few records is a really bad way to study whether extreme weather has changed.

These examples all illustrate that cherry picking record high temperatures in isolated locations tells absolutely nothing about the Earth’s climate.

Peter Kalmus, Data Scientist, Jet Propulsion Laboratory:
This is one of the only scientifically accurate statements in the article. Cherry-picking in general is misleading, which is why scientists—unlike these authors—take extraordinary care not to do it. (While some of the authors’ own cherry-picked records may be true, they in no way support the authors’ argument, and therefore they are contextually inaccurate.)

Fortunately, scientist put in more effort to produce reliable knowledge. A good way to access what science knows about changes in extreme weather is the IPCC Special Report on Managing the Risks of Extreme Events and Disasters to Advance Climate Change Adaptation.

The authors of this article would have saved the time of many readers had they read up on the state of the science.

People may know this period as the Dust Bowl, where bad land management practices produced bare soil, dust storms, crop failure, and heat waves. This affected especially the maximum temperature, the summer temperature and stations in the Dust Bowl region.

Global warming is about global warming. There are other reasons why the temperature changes, but over the last century the main reason is the burning of fossil fuels. Locally, these other reasons can be significant—like the US Dust Bowl.

as time progresses and fossil fuel emissions increase, the number of record highs should increase and record lows should decrease.

In fact, globally, record daily high temperatures are outpacing record daily lows. This is even also the case over the relatively small region of the globe we call the US. See, for example, this Climate Central article.

Concurrently a compilation of all days since 1915 when temperatures exceeded 90F shows them decreasing with time rather than increasing in Figure 2.

The figure again has no source, no way to check how it was computed. Days over 90F focuses on maximum temperature and summer days, the data most affected by the Dust Bowl.

From 1970 until 1998 there was a warming period that raised temperatures by about 0.7 F that helped spawn the global warming alarmist movement. However, since 1998, little warming has occurred while carbon dioxide emissions continue to increase.

The whole article uses tricks like this to invert reality, and will leave readers deeply deceived.

A quick look at the global temperature curve immediately shows that warming continues after 1998 at about the same rate. These facts are completely supported by 4,000 ocean floats

The fact that the Earth is warming is completely supported by ocean floats. 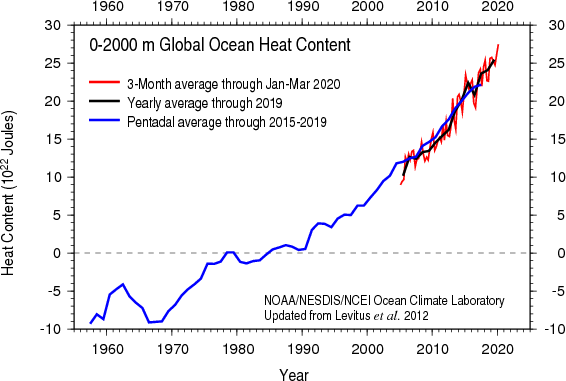 Isn’t it time to start ignoring the calamitous annual claims that this is the hottest year on record?

This is again a claim about the annual mean temperature, not about local daily maxima.

2018 was the fourth warmest year. With the last five years being the five warmest years we have a real problem. Putting your head in the sand does not protect what we hold dear.