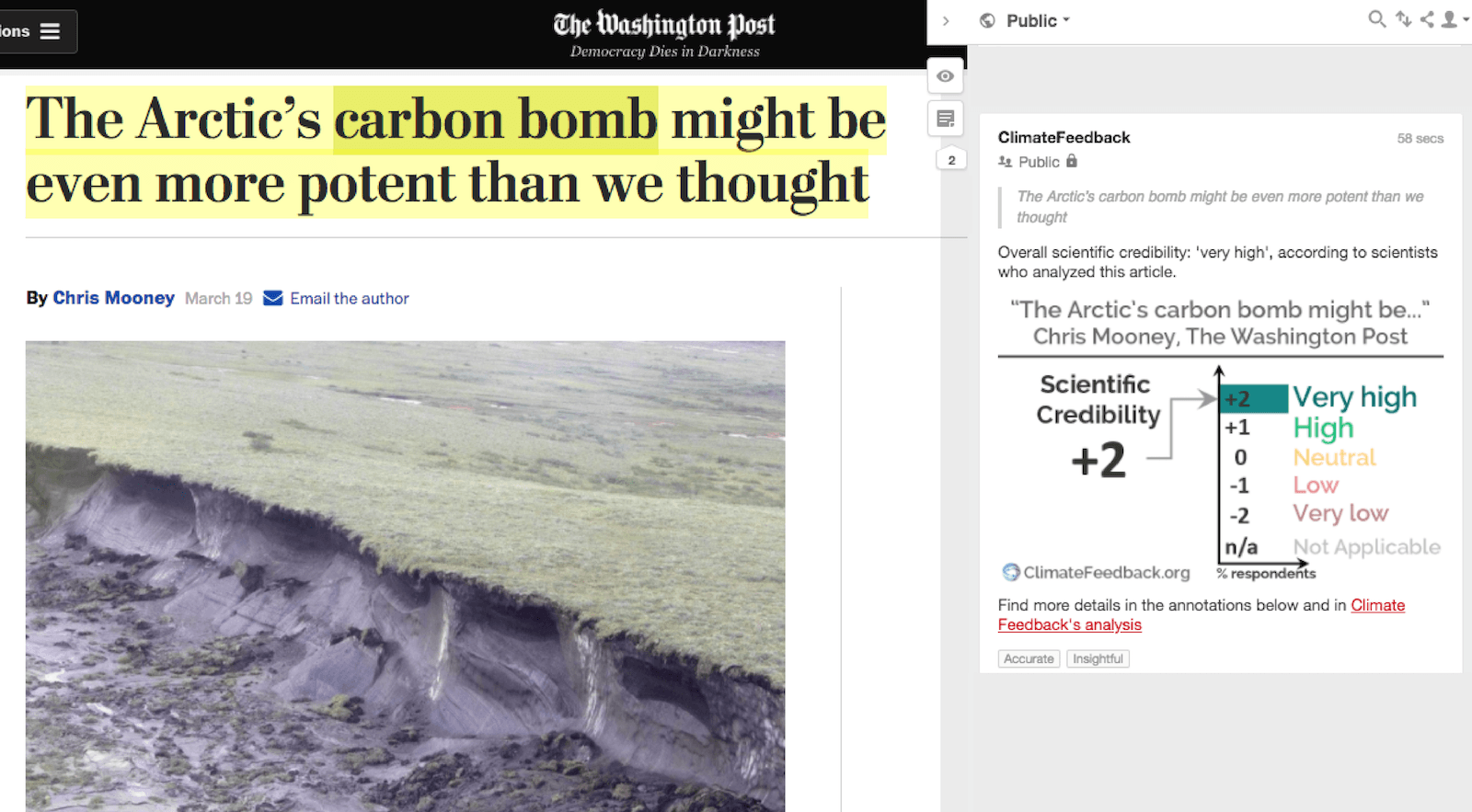 This article in The Washington Post describes new research on greenhouse gas emissions from thawing permafrost—specifically the balance of carbon dioxide vs. methane released from waterlogged permafrost soils.

Scientists who reviewed the article found that it accurately described the study and provided context on its overall implications by quoting comments from two other researchers. The article’s headline, however, may mislead readers through the use of the sensational phrase “the Arctic’s carbon bomb”, which calls to mind a catastrophic, explosive release of greenhouse gas. The study could indicate that more of the carbon released from thawing permafrost will be released as methane—increasing its near-term warming influence—but it is not clear how much additional methane this would represent.

Benjamin Stocker, Postdoctoral research fellow, Centre for Research on Ecology &amp; Forestry Applications (CREAF), Spain:
Although the title of this article (“bomb”) may overstate the implications of the new research referred to here, the main text accurately portrays the recently published article by Knoblauch et al, its implications, and remaining uncertainties. The additional statements about the impact and caveats of new findings, given by different researchers, makes this Washington Post article credible and informative.

Andrew MacDougall, Assistant Professor, St. Francis Xavier University:
The article does a very good job summarizing what is new about the research while also pointing out the main caveats of the study. The title is a bit over-dramatic but the content is accurate.

Charles Koven, Research Scientist, Lawrence Berkeley National Lab:
The article accurately described an interesting new piece of research and how it was done, how the new research fit into a larger debate in the permafrost carbon community, and offered a balanced pair of perspectives on whether the findings of the new research actually shifted the terms of that debate. Well done!

“The Arctic’s carbon bomb might be even more potent than we thought […] methane, a shorter-lived but far harder-hitting gas that could cause faster bursts of warming”

Benjamin Stocker, Postdoctoral research fellow, Centre for Research on Ecology &amp; Forestry Applications (CREAF), Spain:
This wording suggests that permafrost melt in the Arctic is an abrupt event. Even the new research referred to here doesn’t put earlier work* fundamentally into question that argued for “a gradual and prolonged release of greenhouse gas emissions in a warming climate”.

“For some time, scientists fearing the mass release of greenhouse gases from the carbon-rich, frozen soils of the Arctic have had at least one morsel of good news in their forecasts: They predicted most of the gas released would be carbon dioxide”

Andrew MacDougall, Assistant Professor, St. Francis Xavier University:
This is true and is still true given the results of the Knoblauch et al paper*. Most of the gas released will be CO2, but since gram-for-gram CH4 is much stronger greenhouse gas, the warming effect may be more dominated by CH4 than previous studies suggested.

“the researchers calculated that the impact of greenhouse gas emissions from wet soils, or wetlands, will be higher than from drier soils[…] This finding, if further confirmed, could reorient calculations of the overall potential of permafrost to worsen global warming over the coming century.”

Andrew MacDougall, Assistant Professor, St. Francis Xavier University:
The statement is true and properly cautious about the results of the Knoblauch et al paper. The article could have included that the present estimate* for additional warming from the permafrost carbon feedback is on the order of 0.13–0.27 °C to give a more quantitative sense of the strength of the feedback.

“more research would have to be done to go from these results to a forecast for just how much methane could waft from permafrost in the coming decades. It will be important to know, for instance, how much thawed permafrost will be stuck in watery conditions vs. dry ones.”