Seven climate scientists have analyzed the article and they estimate its overall scientific credibility to be 'very low' to 'low'. more about the credibility rating
A majority of reviewers tagged the article as: Cherry picking, Flawed reasoning, Misleading. 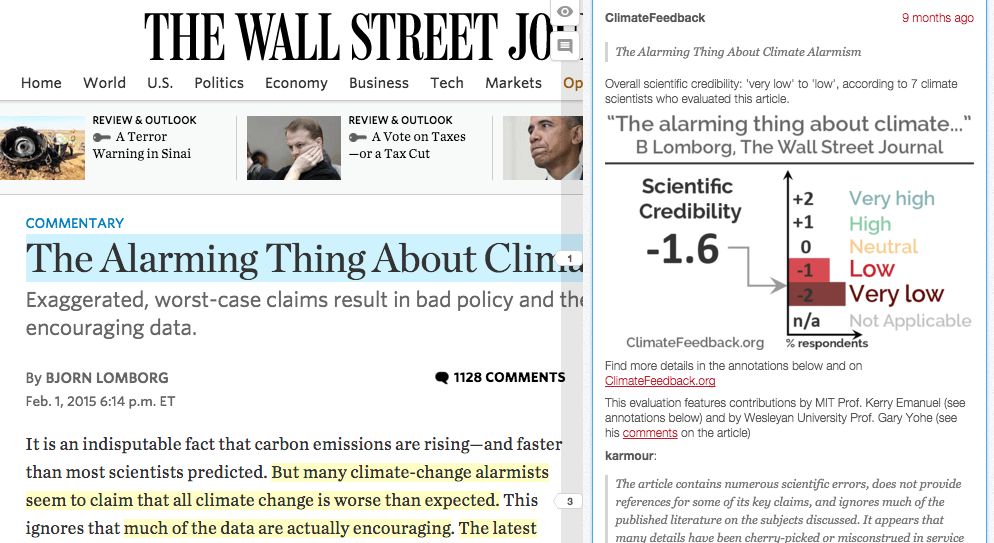 The main reason for this negative evaluation is that the author practices cherry-picking: he is selecting limited evidence to support his thesis that “much of the data about climate change are…encouraging”. The evidence provided is insufficient: several examples are either inaccurate or only speak about one aspect of the problem, ignoring much of the published literature on the subject.

Bjorn Lomborg’s op-ed refers to the recent plateau in global mean temperature, but he ignores that the last fifteen years have been very warm; most of the warmest years on record occurred in the past 15. This is a very old argument, that “cherry-picks” data without providing historical context.
I am “not a climate scientist, but I know many very good scientists”, so I will not speak more to the science behind that.
I will, though, speak to the detected and attributed examples of the observed and anticipated increases in the frequency and intensity of extreme weather events, and the message that Bjorn sends for those whose job is to protect people and natural systems.
These events are the fingerprints of the manifestation of a changing climate that has been reported for decades. It is possible to pick one, like droughts, where attribution is difficult because we have so little data. Or others, like hurricanes, where alternative explanations need some more work.
It is, though, irresponsible to ignore the preponderance of evidence on floods, extreme precipitation events (and if it is winter, these are snow storms), wildfires, etc. These were anticipated to occur as the climate changes. They have occurred around the world (U.S., Russia, Indonesia, Japan, Argentina, etc..), and they are getting worse and more frequent[2].
Bjorn does speak to impacts on humans with his natural disaster discussion, but he ignores the value of adaptations that communities have undertaken over the past decade or so to reduce risk –successful adaptations based on local social, political and economic context that allow people to survive. Ignoring these activities allows Bjorn to suggest that the climate problem is minimal. That is to say, the reductions in deaths that he reports can be attributed largely to reactions undertaken by communities and societies because they had recognized the “dark tails” of what the future might hold[3].
The message of this opinion piece, if believed, would eliminate the value of responses based on risk –and cost lives and billions of dollars in damage[4] that will then be attributed to a gross misinterpretation of the recent history.
Bjorn is a fan of cost-benefit analysis with high discount rates and a single metric, and it is from that perspective that he derives his repetition of the same message. The world has moved on, and the WSJ should know better. Their readers understand risk management; why do not the editors insist that their opinion writers do the same?

Kyle Armour, Assistant Professor, University of Washington:
The article contains numerous scientific errors, does not provide references for some of its key claims, and ignores much of the published literature on the subjects discussed. It appears that many details have been cherry-picked or misconstrued in service of making a political point.

Alexis Berg, Associate Research Scholar, Princeton University:
The author tries to rebut the narrative “that the world’s climate is changing from bad to worse”. In doing so, he erects a straw-man, cherry-picks studies and misrepresents current climate science. Furthermore, the logic that since things are not ‘worst-than-we-thought’, we shouldn’t take action and do the things we would do if things were simply ‘bad’, is lost on me…

Emmanuel Vincent, Research Scientist, University of California, Merced:
The article is imprecise, for instance, about who the “doomsayers” and the “alarmists” are: since the core of the argumentation is about them, a definition of who they are and what they argue exactly cannot be avoided. It is also vague in its conclusion: “we need balance”, here again what exactly is meant by balance should be made clearer.

John Dwyer, Postdoctoral research fellow, MIT:
Tries and fails to make a convincing case for why humans need to worry about climate change less than they currently do.

Britta Voss, Postdoctoral Research fellow, U.S. Geological Survey:
Although this author appears to have read parts of the IPCC report and carefully selected the facts which support his narrative, he presents information in a very misleading way, and some of his statements (e.g. “despite endless successions of climate summits, carbon emissions continue to rise”) do not support his thesis that action on climate change is alarmist and unnecessary. His conclusion that “climate change is not worse than we thought. Some indicators are worse, but some are better” suggests a false equivalency between the indicators that are “worse” and those that are “better”.

[1] Gary Yohe is also
– Senior member of the IPCC since the 1990’s;
– Member of assorted National Academy of Sciences panels including America’s Climate Choices; and
– Vice Chair of the National Climate Assessment Development and Advisory Committee (for the United States)

[3] Adaptation sections in the regional chapters of IPCC AR5