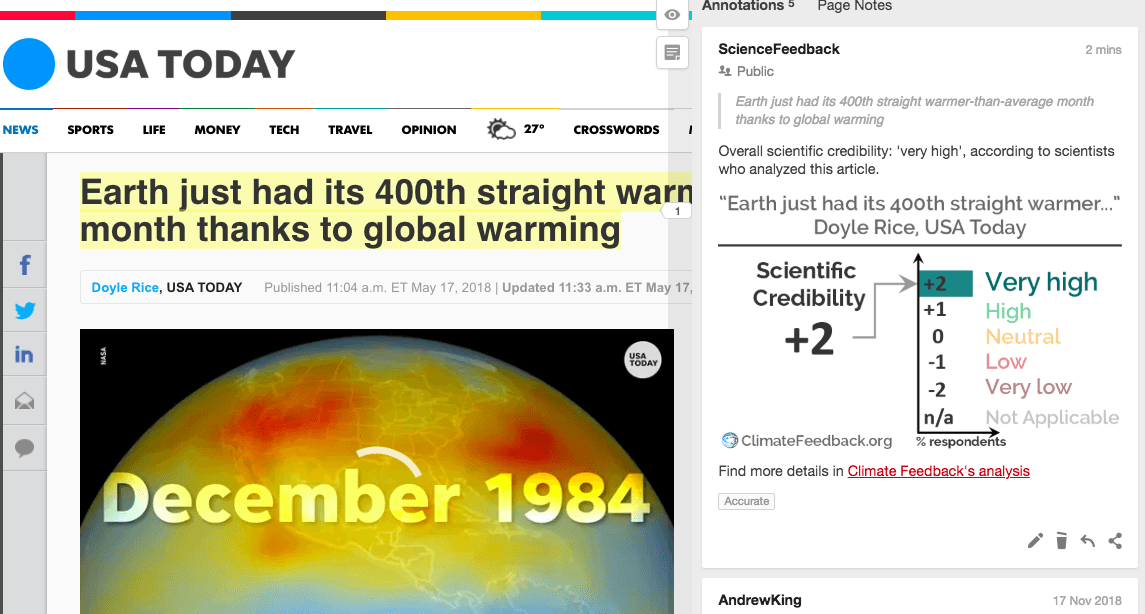 This article in USA Today notes that April 2018 was the 400th straight month that global temperatures were above the 20th century average, and correctly identifies human activities as the cause of this trend. It also highlights several regions that saw record-high April temperatures.

Scientists who reviewed the article found that it accurately described these facts and clearly explained how above-average months are calculated.

Andrew King, Research fellow, University of Melbourne:
This article does a good job of summarising the extended run of global-average temperatures above the 20th century average. The article correctly attributes the cause of this extended run of global warmth to human-caused greenhouse gas emissions.

Peter Thorne, Professor, Maynooth University:
The piece accurately reports the surface temperature record warming of recent decades and joins the dots appropriately to the underlying cause of human emissions. It appropriately draws the distinction between regional/national records and the global mean behaviour. The included quotes are to authoritative sources.

Climate scientists use the 20th-century average as a benchmark for global temperature measurements. That’s because it’s fixed in time, allowing for consistent “goal posts” when reviewing climate data. It’s also a sufficiently long period to include several cycles of climate variability.

This is an excellent summary of why the 20th century average is a suitable baseline.

NOAA’s analysis found last month was the 3rd-warmest April on record globally. The unusual heat was most noteworthy in Europe, which had its warmest April on record, and Australia, which had its second-warmest. Portions of Asia also experienced some extreme heat: In southern Pakistan, the town of Nawabshah soared to a scalding 122.4 degrees on April 30, which may have been the warmest April temperature on record for the globe, according to Meteo France. Argentina also had its warmest April since national records began there in 1961.North America was the one part of the world that didn’t get in on the heat parade. Last month, the average U.S. temperature was 48.9 degrees, 2.2 degrees below average, “making it the 13th-coldest April on record and the coldest since 1997,” NOAA said.

The article points to several regional records or near-records for heat extremes that occurred near the start of the year.

The increase in the number of warm temperature records has been documented for many regions of the world (e.g. the US1)  and can be attributed to human-caused climate change2.

For the year-to-date, the Earth is seeing its 5th-warmest start to the year.

As of November, according to the NASA GISS record, 2018 is likely to be the 4th warmest year on record.