Seven climate scientists analyzed the article and estimate its overall scientific credibility to be ‘very low’. more about the credibility rating
A majority of reviewers tagged the article as: Biased, Flawed reasoning, Inaccurate, Misleading. 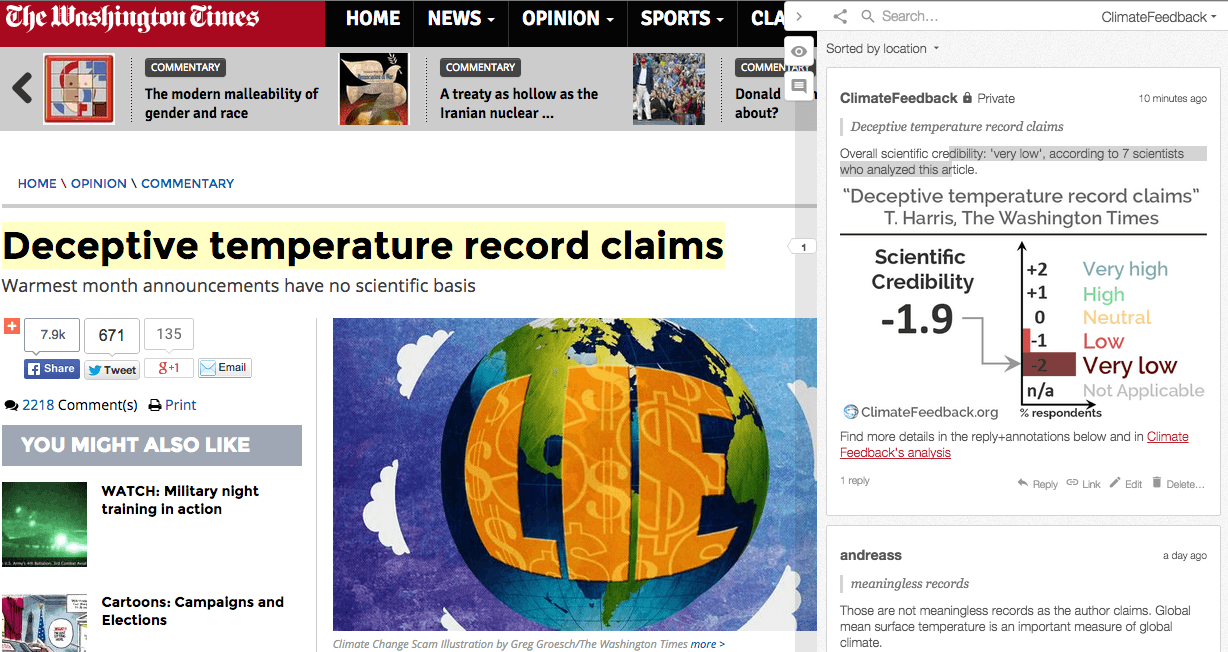 Our reviewers unanimously characterize this article as misleading and in disagreement with elementary science. The author uses a scientifically baseless argument to support his claim that an average global temperature for the surface of the Earth is a meaningless quantity.

Shaun Lovejoy, Professor, McGill University:
The argument has two parts: a) that the accuracy of the measurements is too low to claim a record, b) that the global temperature is meaningless.
a) is an affirmation that is not supported by the facts (the actual accuracy is indeed enough to affirm that the month is hottest – or at least amongst the hottest).
b) This is a repetition of a sophisticated but irrelevant argument put forward many years ago by Essex and McKitrick.

Victor Venema, Scientist, University of Bonn, Germany:
The article is deceptive and claiming that a global average temperature does not exist is simply wrong.

Dargan Frierson, Associate Professor, University of Washington:
The only deception here is by the author, who uses a false scientific claim (that global average temperature does not exist) to back up his ridiculous assertion that global warming doesn’t matter.

Andreas Schmittner, Associate Professor, Oregon State University:
The article claims that global mean temperature is not a meaningful measure of climate, contrary to climate science and its standard practices. It is a typical denial argument that has no foundation in science.

Alexis Berg, Associate Research Scholar, Princeton University:
This article recycles old, specious skeptic talking points about how the Earth’s global temperature does not exist, cannot be computed and/or is irrelevant to its inhabitants. All long-debunked nonsense.

John Abraham, Professor, University of St. Thomas
This article makes several inaccurate claims and the authors demonstrates a nearly complete lack of knowledge about measurement of the Earth’s climate. The claims about temperature accuracy, ocean measurements, thermodynamics and others are just plain wrong.

“This is the distance between Ottawa, Canada, and Myrtle Beach, S.C. cities with very different climates. Yet, according to NASA, only one temperature sensing station is necessary for the two cities and the vast area between them to be adequately represented in their network.”

Victor Venema, Scientist, University of Bonn, Germany:
One of the reasons why climatologists prefer to work with “anomalies”, deviations from the typical climate, is that anomalies are similar over large regions, especially when it comes to averages over longer periods. I guess everyone still remembers that last winter the entire East Coast was colder than usual, while the West Coast was warmer than usual.

Thus while it naturally was absolutely warmer in the South, regions of the East coast with different climates still had similar temperature anomalies, this is why a station at a given point is representative of the temperature anomaly in a large region around that point.

See also this article by Real Climate : “the basic issue is that temperature anomalies have a much greater correlation scale (100’s of miles) than absolute temperatures – i.e. if the monthly anomaly in upstate New York is a 2ºC, that is a good estimate for the anomaly from Ohio to Maine, and from Quebec to Maryland, while the absolute temperature would vary far more. That means you need fewer data points to make a good estimate of the global value.”

“In their award winning book, ‘Taken By Storm’ (2007), Canadian researchers Christopher Essex and Ross McKitrick explain: ‘Temperature is not an amount of something [like height or weight]. It is a number that represents the condition of a physical system. In thermodynamics it is known as an intensive quantity, in contrast to quantities like energy, which have an additive property, which we call extensive in thermodynamics.’”

Andreas Schmittner, Associate Professor, Oregon State University:
Temperature and heat (energy) content are closely related such that the heat content is the temperature times the specific heat capacity and the density. Because the specific heat capacity is a constant and density variations are small compared to temperature variations the heat content is typically very closely related to the temperature of the air in the atmosphere or the water in the oceans. Thus, while this citation of Essex and McKitrick is a correct statement about the principles of thermodynamics, its use here is misleading because it does not acknowledge the close relationship between temperature and energy in practical climate applications.

“Temperature, like viscosity and density, and of course phone numbers, is not something that can be meaningfully averaged. ‘Global temperature’ does not exist.”

Alexis Berg, Associate Research Scholar, Princeton University:
According to this line of argument, one could not talk about human body temperature, because the temperature of someone’s feet is not the same as, say, their belly. Yet I am sure Mr. Harris accepts the medical relevance of the concept of fever (or hypothermia)…

A measured temperature is always an average over time and space. The thermometer is not infinitely fast and probes a finite space.
If Harris were right, you could no longer say something as simple as your bedroom being cooler than your living room. Or the Moon being colder than the Earth.

2. Continued climate change comes with serious impacts for humans and other species.

“Even if you could calculate some sort of meaningful global temperature statistic, the figure would be unimportant. No one and nothing would experience it directly since we all live in regions, not the globe. There is no super-sized being straddling the planet, feeling global averages in temperature. Global warming does not matter.”

Alexis Berg, Associate Research Scholar, Princeton University:
This is nonsense. What about the last ice age, when global temperature was estimated to be a handful of degrees (C) lower than today, and half of North America and Europe were under huge ice sheets?
Of course for large changes regional temperatures are tied to the global temperature. Almost all regions are currently warming with global warming at present, and are projected to do so with further warming. Note that warming is indeed “global”, but not every place is warming at the same rate, and some few places might even experience negative trends for now (e.g., Southeast US, North Atlantic – see below, or also here).
Also note that as this supposedly irrelevant global temperature is rising, a host of associated metrics/impacts are following suit: sea level is rising, ice sheets, sea ice, permafrost and glaciers are melting, species are migrating, etc. 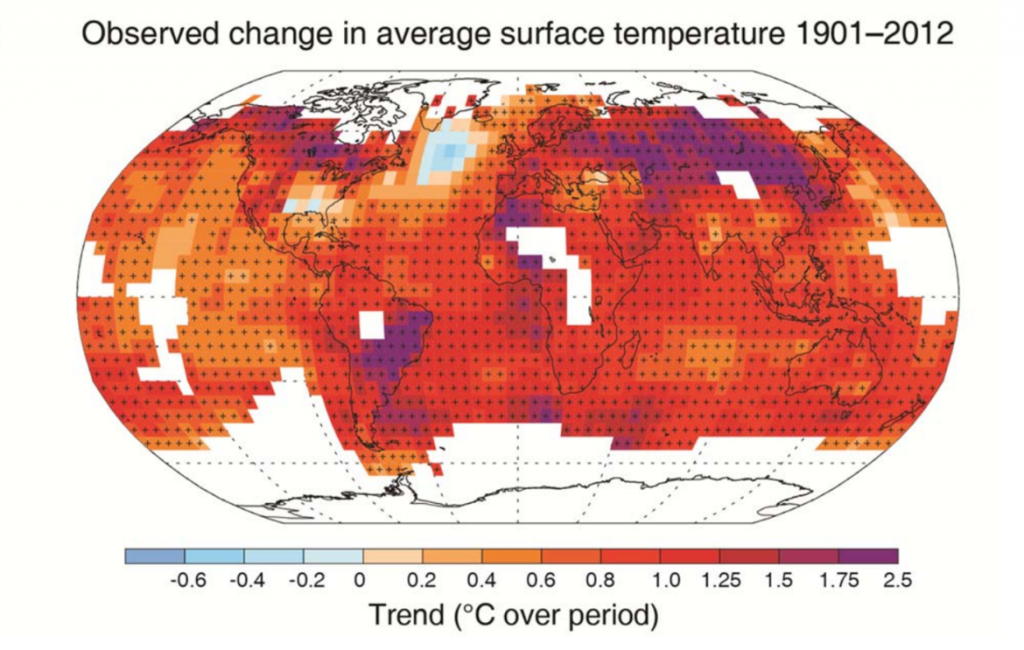 Andreas Schmittner, Associate Professor, Oregon State University:
Global warming matters a great deal. We know that global mean temperatures are related to sea level such that a warmer planet is one with less snow and ice on land and hence higher sea level.