Six clinicians and scientists analyzed the article and estimate its overall scientific credibility to be neutral to high. more about the credibility rating
A majority of reviewers tagged the article as: Accurate, Imprecise/Unclear. 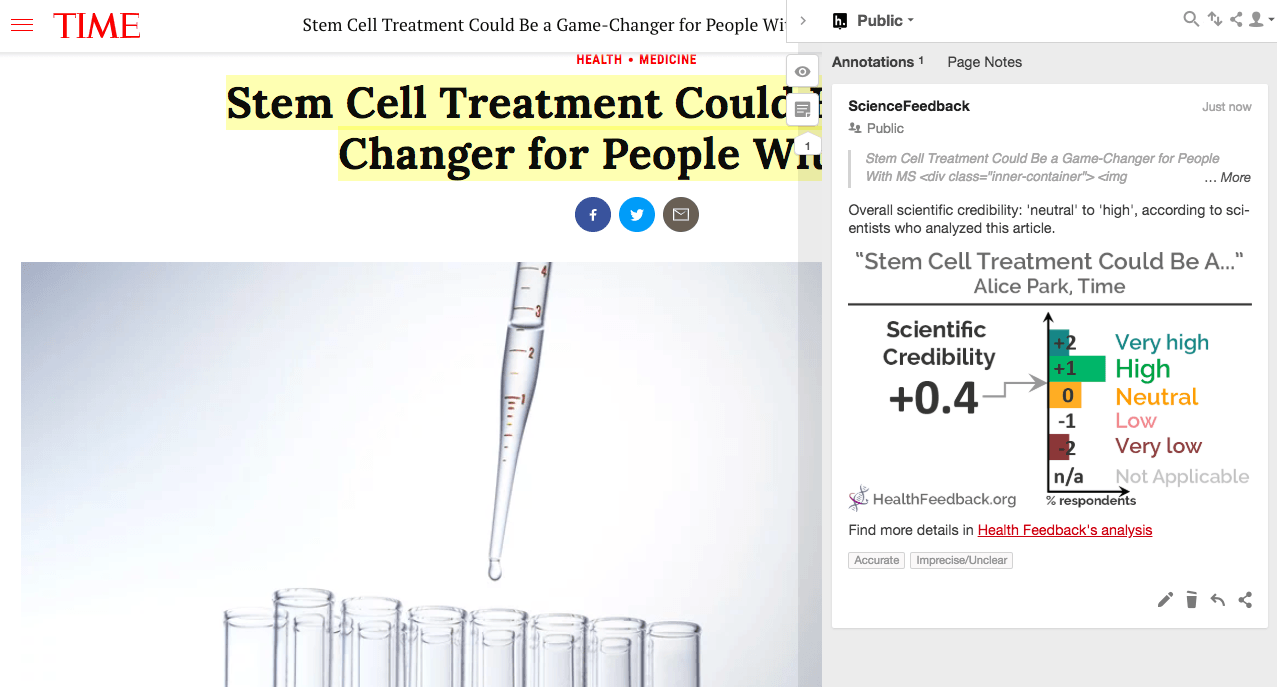 Reviewers found the article to be generally accurate in summarising the main findings of the study, although mistakes in some crucial aspects were present. For instance, the sequence of events in the transplant procedure was described wrongly. Adding important details for clarity would have been useful, such as which group had conducted the trial and the type of stem cells used in the study (since many different types exist that are also used for treating other diseases). Providing additional context would also have better informed readers about the current state of knowledge about MS, such as the fact that the main causes of MS have been identified and that bone marrow transplants have already been used in several MS treatment studies prior to the one reported in the article.

[This is part of a series of reviews of 2018’s most popular health and medicine stories on social media. This article has been shared more than 560,000 times.]

Jeffrey Cohen, Director, Mellen Center for Multiple Sclerosis Treatment and Research:
Overall, the article is a reasonable summary of the study. One issue, however, is that the article never mentions the type of stem cell transplantation that was done. There are many types of stem cells and how they might be used. This study specifically tested immunoablation followed by hematopoietic stem cell transplantation (i.e. deleting the immune system with high-dose chemotherapy and regenerating it with a transplantation of blood-forming stem cells). The other points are: 1) the study has not yet been published and 2) the study had some methodological issues.

Roland Martin, Director (CRPP Multiple Sclerosis), University Hospital Zurich:
The article contains some inaccuracies and simplifications, but is overall accurate. It is not clear which article and whose scientific data it refers to. Such information should be mentioned in the article. The type of stem cells that were used for the procedure is also unclear.

Immune system renewal after hematopoietic stem cell transplantation has actually been demonstrated a long time ago by Muraro et al.[1] The article’s description of the procedure itself, i.e. the sequence of steps, is incorrect (see Annotations below for more details). Despite the clearly very promising results, it would have been good to state that the development of treatments for MS has been quite successful in the last two decades. Hematopoietic stem cell transplantation is clearly a step forward – although this is not yet accepted by many neurologists. However, it is an invasive treatment with a certain (albeit small) risk of dying from complications (mostly infections) during the period when the “old” immune system has been destroyed, and new immune cells are not yet reconstituted.

Mark Freedman, Senior Scientist (Neuroscience), Ottawa Hospital Research Institute:
First of all, “stem cell treatments” are extremely sought after for treating many ailments and are a major source of medical tourism. The specific procedure being discussed in the article is a bone marrow transplant (BMT). Hematopoietic stem cells are used because without them, the chemotherapy given to destroy the malfunctioning immune system will also leave the body vulnerable (e.g. to infections) because it lacks sufficient white and red blood cells. There are other forms of stem cells – such as mesenchymal stem cells – that are being tested in MS that do NOT utilize chemotherapy[1,2,3].

Secondly, although this is the first truly randomized study of BMT in MS, there have been numerous other studies, some using other types of chemotherapy that have produced better results[4].

Finally, the target of MS is myelin, which is the insulation of the wires (not lining), which in the central nervous system is made by cells called oligodendrocytes. Although not all neurons require their wires (or axons as they are called) to be insulated in order to conduct, those that do usually convey the more important messages such as vision, motor capability, and sensation. It is believed that when the insulation is stripped away under attack from the faulty immune system, it exposes the underlying wire (axon) to the same inflammatory milieu and that ultimately leads to its destruction. Once there are no longer any wires, the neurons giving rise to those wires eventually succumb as well.

Violaine K Harris, Senior Research Scientist, Tisch MS Research Center of New York:
The article does not mention where the study was conducted or what drug it was compared to. They also don’t mention the side effects of the treatment, which can involve extended hospital stays. The article correctly points out that this may not be an appropriate approach for all patients with MS.

Riccardo Saccardi, Professor, Careggi University Hospital:
The article provides a good overview of the topic. However, a major misleading item needs to be addressed, which is the phrase “rebooting the immune system with healthy cells”, which suggests that stem cells from healthy donors are used. This is an autologous transplantation, therefore only the patient’s own stem cells are used (described in a review by Muraro et al.[1]; also see the figure below from the review for an overview of the procedure). It would have been better to phrase it as “rebooting the immune system with the patient’s own blood stem cells”. 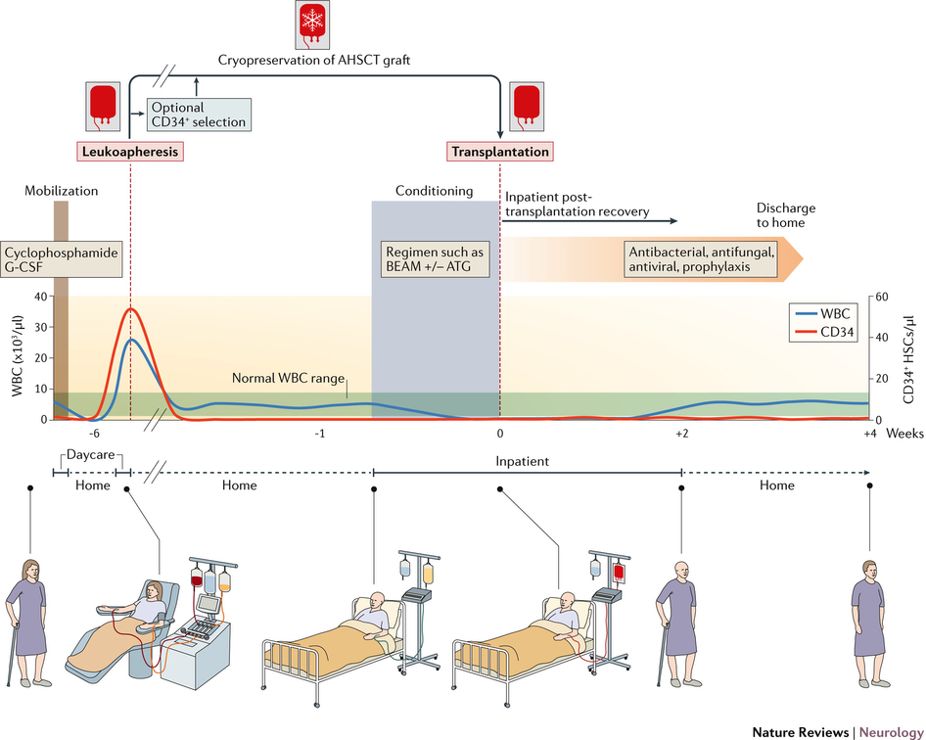 Christopher Labos, Associate, McGill Office for Science and Society:
Overall a good article. The title contained some unfortunate buzzwords like “game changer” but the text itself fairly accurately reported on the results of the trial in question, mentioned limitations, and explained the context fairly well.

“Researchers reported encouraging results for a stem cell transplant for multiple sclerosis (MS) that some doctors and patients hope will be a breakthrough for MS treatment.“

“People in the stem cell transplant group received chemotherapy to wipe out most of their current immune cells that were wrongly attacking neurons. They then took special medications to coax their stem cells, which produce the entire population of immune cells, out of the bone marrow and into the blood to start churning out new immune cells.“

Roland Martin, Director (CRPP Multiple Sclerosis), University Hospital Zurich:
It is actually the other way around: first comes the mobilization of blood stem cells from the bone marrow using special drugs, followed by the harvest of these cells from the peripheral blood. Finally, the chemotherapy is given to destroy immune cells.

“It’s not clear why the immune system in people with MS starts attacking its own nerve cells.“

Roland Martin, Director (CRPP Multiple Sclerosis), University Hospital Zurich:
There is now plenty of data showing that MS is a prototypic autoimmune disease with a complex genetic trait and a few environmental risk factors (e.g. Epstein-Barr virus, low levels of vitamin D, smoking, obesity) as main causes[1]. These factors lead to activation of pathogenic T and B cells, which then mediate the disease[2]. While there are certainly still open questions, the main causes have been identified.

“Some research suggests that genes, combined with exposures to environmental agents ranging from pollutants to chemicals in the diet, for example, could misdirect the immune cells to destroy neurons. Re-setting the system in people who develop the disease might erase those effects and give those with MS a chance at slowing or even beating their disease.“

Roland Martin, Director (CRPP Multiple Sclerosis), University Hospital Zurich:
Rather than erasing the effects of the genetic trait and exposure to the environmental factors, the proper explanation would be that the chemotherapy and hematopoietic stem cell transplant re-establish tolerance and halt the autoimmune process against brain tissue by eliminating disease-causing autoimmune T cells and rebuilding a new adaptive immune system.

“But the study is the first to rigorously test the stem cell transplant for MS.“

Roland Martin, Director (CRPP Multiple Sclerosis), University Hospital Zurich:
There have been several studies that tested this principle before. It is correct that this is the largest randomized controlled study of this kind.

“The transplants are also expensive, and people who need them would likely have to go to a specialized center and work with a team of transplant and neurology experts who are familiar with the technique.“

Roland Martin, Director (CRPP Multiple Sclerosis), University Hospital Zurich:
The cost of currently approved treatments are also high and surpass those of the hematopoietic stem cell transplant, which is a one-time treatment, after a few years.