Six climate scientists have analyzed the article and they estimate its overall scientific credibility to be 'low' to ‘very low’. more about the credibility rating
A majority of reviewers tagged the article as: Flawed reasoning, Inaccurate, Misleading. 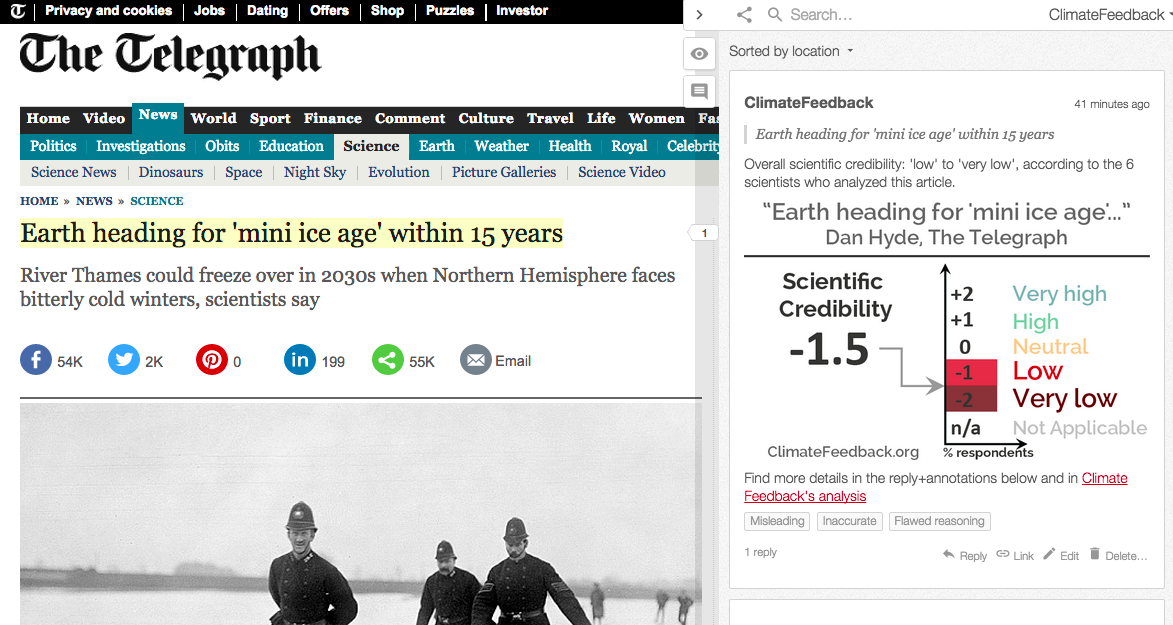 The article’s central message about an imminent mini ice age is unfounded, as it’s based on an incorrect understanding of what the Maunder minimum is, and jumps to conclusions about future climate impacts.

UPDATE (05 Aug 2015): The original article has been modified and now features a “Correction” acknowledging that “An earlier version of this article inaccurately stated that scientists have predicted bitterly cold winters in the 2030s“. Read More

The article is based on material in a press release for an international astronomy meeting. Nowhere in the press release is it stated that this will cause a mini ice age, or cold winters, or the Thames to freeze. The press release is limited to a study of the solar cycle. The peer reviewed literature shows that changes in solar irradiance due to sunspot cycles may cause the global average temperature to vary by up to 0.1C on an eleven year cycle. The published peer reviewed literature concludes that the Little Ice Age was primarily due to an extended period of increased volcanic activity. A recent study [in press] quantified the cause of the cooling during the Little Ice Age (1600-1850) to be primarily due to changes in volcanic activity (77%) and secondarily due to changes in greenhouse gas concentrations (13%); changes in solar output contributed only about 10% to the net cooling of the Little Ice Age.

Michael Lockwood, Professor of Space Environment Physics, University of Reading:
The whole argument in the article rests on the incorrect myth that the Maunder minimum caused a “mini ice age” and uses that name to draw specious implications and conclusions. Just a couple of weeks ago we made a press release about state-of-the-art climate modelling led by the Met Office (by Sarah Ineson et al., published in Nature Communications) that shows what a return to Maunder minimum conditions would (and would not do) – but that is ignored.

Loic Jullion, Postdoctoral Research fellow, Mediterranean Institute of Oceanography:
The Author (Dan Hyde) uses a paper focussing purely on the dynamics of the Sun solar activity to extrapolate the arrival of an upcoming ice age. Unless Dan Hyde actually attended the meeting and heard the authors explicitly mentioning the impact of their findings on climate, this article is misleading.

Emmanuel Vincent, Research Scientist, University of California, Merced:
This article concludes on the imminence of an ice age while the initial scientists’ press release—although ambiguous—does not. Why not fact-check sensational information before publication?

Britta Voss, Postdoctoral Research fellow, U.S. Geological Survey:
The research this article reports on does not support a “mini ice age”, and the article does not offer commentary from researchers not involved in the work or point out that the results have not yet gone through the process of peer review.

Below is a list of a few statements made by Dan Hide in his article along with comments and replies made by scientists.

“The earth is 15 years from a “mini ice-age” that will cause bitterly cold winters during which rivers such as the Thames freeze over, scientists have predicted.”

Michael Lockwood, Professor of Space Environment Physics, University of Reading:
The term “mini ice age” is inherently misleading in the context of solar variations as it implies a global decrease in temperatures and at all times of year. This does not apply at all to the solar Maunder minimum. Temperature observations from central England show that summers during the Maunder minimum were, if anything, slightly warmer than average – indeed the third warmest summer in that record occurred in the middle of the Maunder minimum, just 2 years after the coldest winter. Hence there was certainly not the unremitting cold in the Maunder minimum that the term “mini ice age” implies. There is evidence that there was increased occurrence of cold winters during the Maunder minimum but this is an effect of jet stream behaviour specific to northern Europe and the USA and not a global ice age. Recent climate modelling has reproduced this effect and indicates that the inferred lower solar ultraviolet emissions during the Maunder minimum modified the jet stream such that winters in northern Europe and the USA were colder but those in Greenland/Canada and southern Europe were warmer. This was not an “ice age” of any kind. Part of the confusion exploited by this article is that there is some evidence from tree ring data for a slight global decrease in temperatures that has been called “the little ice age” but this is nothing to do with solar variations and commenced decades before solar activity fell and the Maunder minimum began and continued after it ended.

“Temperatures will fall dramatically in the 2030s.”

Georg Feulner, Senior Scientist, Potsdam Institute for Climate Impact Research (PIK):
While regional and seasonal effects might be larger, the expected global temperature response to a future grand solar minimum similar to the Maunder Minimum is a cooling of about 0.1°C. It should be pointed out that this cooling would occur on the background of current anthropogenic warming which is about a factor of 10 larger. To claim that “temperatures will fall dramatically” is thus not really justified. It is also clear from these numbers that a future grand solar minimum (which would last only for a few decades anyway) would not save us from global warming, as we have shown in a scientific paper and explained here. The marginal temperature differences between warming scenarios with and without a future Maunder Minimum is illustrated here:

“In a presentation to the National Astronomy Meeting in Llandudno, she said the result would be similar to freezing conditions of the late 17th century.”

Dr. Zharkova’s research predicts a lower solar activity for the next couple solar cycles (explaining patterns in recent solar activity in terms of internal variability within the solar dynamo, and extrapolating them in the future), leading to a so-called “solar minimum”, but says absolutely nothing about its impact on the climate system.

A link between this decreased solar activity and the climate system cannot be drawn from the research presented or from the peer-reviewed paper on which it is based:

Notes:
[1] See the rating guidelines used for article evaluations.
[2] Each evaluation is independent. Scientists’ comments are all released at the same time.

Here is the list of statements that have been removed (or modified) from the original version of The Telegraph article:

See the retracted sentences highlighted over the article.