Eight climate scientists have analyzed the article and they estimate its overall scientific credibility to be ‘very low’. more about the credibility rating
A majority of reviewers tagged the article as: Cherry picking, Flawed reasoning, Inaccurate, Misleading. 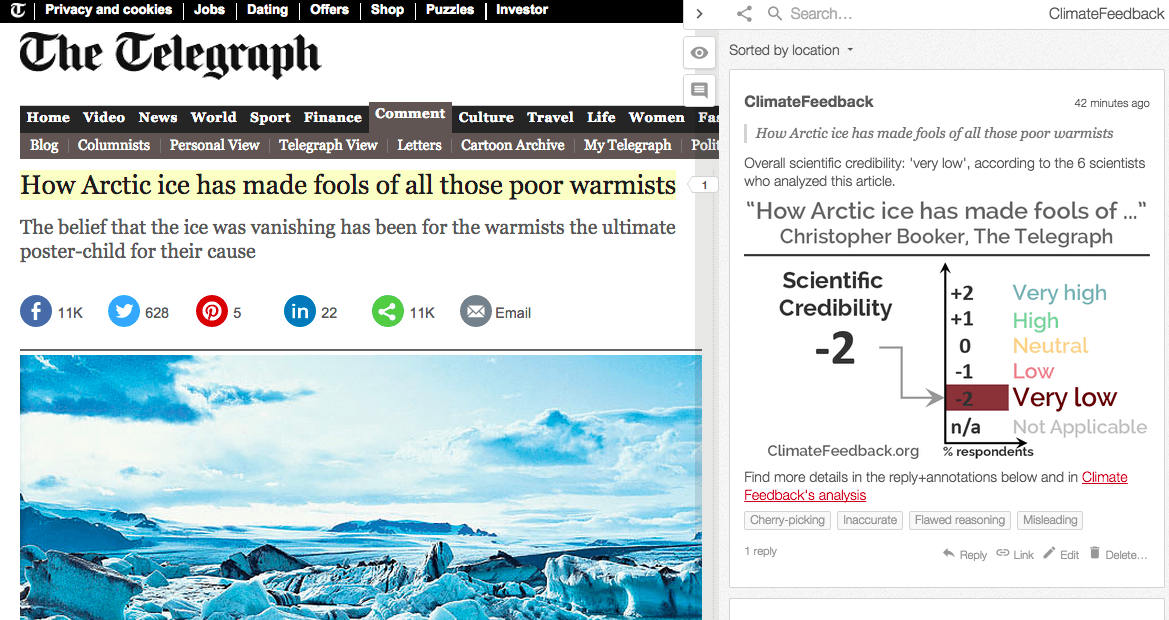 Julienne Stroeve, Senior Research Scientist, University College London:
The writer fails to understand interannual variability. Long-term ice extent decline and ice volume decline does not mean each year will be lower than the year before, but that the long-term trend is towards less sea ice and thinner ice. The fact that the ice thickness increased from the record low in 2012 is no surprise since there was more ice left over in summer 2013 and 2014. This does not signal a “recovery” as the ice is still much thinner than it was in the 1980s and 1990s. It is simply a reflection of interannual variability, in particular a cooler summer in 2013 that resulted in significantly less ice melt that year. Note that the thickness did not increase by a third, the total ice volume (thickness x area) increased.

The article contains numerous scientific errors as well as errors in understanding basic physics and how things are measured. For example, the author incorrectly states that you cannot measure thick ice with electromagnetic induction instruments and that instead a tape measure was needed. In fact the reverse is true, if the ice is too thick, it’s too hard to drill through the ice and measure it with a tape measure. The author is also incorrect that there is more polar ice than since 1979. Global sea ice measurements do not support this statement.

Finally the fact that ships get stuck in the ice is never a surprise to those working in the polar regions. Conditions vary regionally all the time and movement of ice can suddenly result in ice compression and thick ice that may trap ships.

Andreas Schmittner, Associate Professor, Oregon State University:
The article claims that there is more polar ice than at any time since satellite observations begun. The existing observational evidence suggests the opposite.

Alexis Berg, Associate Research Scholar, Princeton University:
This “take” on Arctic sea-ice changes, and more generally polar ice evolution, is highly inaccurate and totally misleading. The authors goes to great lengths to try to convince readers that polar ice is doing just fine, and therefore by extension that global warming is nothing to worry about – he cherry-picks claims, tries to pass anecdotes as evidence and annual changes as representative of long-term trends.

Jonathan Lauderdale, Postdoctoral Research Associate, MIT:
This article is cherry picking individual years in the satellite sea ice record whilst ignoring the long term trend. It uses anecdotes of ships getting stuck in locally thick sea ice whilst ignoring the broader spatial and temporal patterns of change. It uses misleading confusion of the effect of sea ice and land ice on sea level to justify the authors opinion that climate change is one of “the longest-running farces of our modern world”. Arctic sea ice is just one thread of evidence amongst many that suggest the climate is undergoing a warming shift as a result of anthropogenic activities.

Emmanuel Vincent, Research Scientist, University of California, Merced:
The article contains major inacurracies and fails to remind the broader context of polar sea-ice and land-ice evolution over the last several decades. It also builds on a few cherry-picked facts to reach its conclusions; in science one has to account for all evidences to conclude on the most likely theory.

Britta Voss, Postdoctoral Research fellow, U.S. Geological Survey:
This article cherry-picks portions of climate records which suit the author’s argument (that changes in Arctic ice are overstated or not a matter of concern) and relies on anecdotes rather than technical analysis. Climate records cannot be considered only on a year-to-year basis because many trends develop over decades or longer.

Kyle Armour, Assistant Professor, University of Washington:
This article contains major scientific errors in just about every paragraph. Those scientific statements that are somewhat accurate are used in very misleading ways (e.g., the expansion of Antarctic sea ice being incorrectly linked to sea level rise; and the increase in sea-ice volume over just a few years being taken as a sign of sea-ice recovery). Further, the article highlights statements made in the press and findings by scientists that have always been considered far outside the scientific mainstream, which gives me the impression that the article was written to be intentionally misleading.