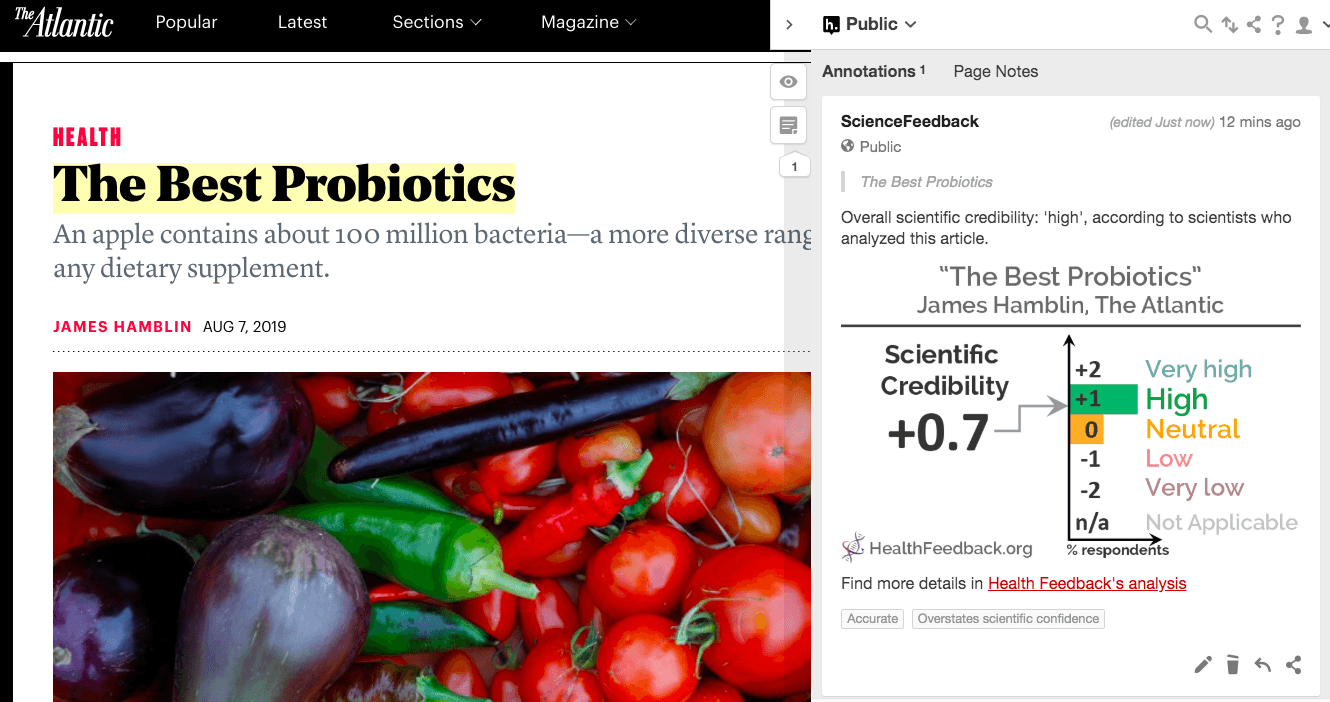 This article, published by The Atlantic, discusses the potential of maintaining a healthy gut microbiome by consuming fresh produce (also called whole foods), based on research findings showing different types of bacteria growing on food such as apples[1]. The relationship between the gut microbiome and health has been one of long-standing scientific interest, with numerous studies documenting associations between various diseases and human gut microbiome diversity[2,3].

The author walks us through research findings that showed how people who received their vitamin and mineral intake through food were less likely to die from cancer and heart disease compared to people receiving vitamins and minerals through supplements[4]. This naturally leads to the question of why such a difference exists, since vitamin supplements are generally synthesized to be exactly the same as those derived from food.

The author hypothesizes that this difference could be due to food processing, which would remove not just dietary fibre from fresh produce, but also microorganisms growing on the food itself. In support of this hypothesis, the author cites a 2019 research article, which studied the variety of microorganisms growing on organically and conventionally grown apples[1], leading to the idea that microorganisms on food could enhance human health by acting as probiotics (like those found in yogurt and other fermented foods).

Scientists who reviewed the article found that the article’s reporting of research findings was accurate and balanced. However, they did point out that the research studies cited by the article were limited in ways that made them inconclusive about the potential of food as probiotics. For example, the apple microbiome study only tested a small number of apples from one country (8 in fact)[1]. More importantly, the aim of the study was to determine microbial diversity on apples, not whether fresh foods could act as probiotics.

Reviewers acknowledged that the author’s hypothesis (i.e. whole foods can act as probiotics) is well-reasoned and interesting, but also highlighted that this hypothesis was never actually tested in any of the cited research studies. More cautious language could help to signal uncertainty about the research and hypothesis to readers.

The article first presents a well-reasoned perspective on probiotics as “supplements”, still relatively untested and possibly most useful for targeted cases. The summary of the recent apple microbiome paper, which is the focus of the piece, is accurate in its relaying of the key findings, and stays within healthy and reasonable recommendations based on existing science.

My main reservation is how quickly and completely the focus shifts to these apple microbes as human gut colonizers and playing an active role in human gut diversity. This connection is in no way tested by the authors, and the primary findings of the paper–differences in apple diversity between conventional and organic grown apples–are absent. Additionally, it would be nice to have a caveat based on the extremely limited scope of the study, testing four apples of a single varietal from one growing region.

The purpose of the article seems to be to highlight that food is much more complex than just supplements, starting off highlighting observational data that dietary intake of nutrients from foods, but not supplements, reduces risk of death. The article then pivots to highlight new research that one of the reasons foods may be different than supplements is by serving as a source of microbes, following a publication in the journal Frontiers about the apple microbiome. The author of the article thinks that the microbes on foods might partially explain the health benefits of certain foods.

The author of the article is quite enthusiastic about this hypothesis, but it is indeed just a hypothesis. There is not strong experimental data that the microbes on foods meaningfully influence the composition of the gut microbiome and subsequently influence health outcomes. The author sets us this narrative with observational nutritional epidemiology studies, assuming that nutrients from foods but not supplements preventing death is a causal situation, when it is very likely to be confounded by the nature of those who take supplements vs those who consume nutrient dense foods. The author also uncritically cites the Frontiers work on the apple microbiome, which was based on 4 conventional and 4 organic apples grown in Austria that were handled differently post-harvest. This is hardly a representative sample of the ‘apple microbiome’. The work should be treated quite cautiously until repeated in large samples, given how little information in the methods is presented that attempts to prevent contamination throughout the handling process. Indeed, the field of microbiome research is still struggling with identifying what are usual microbiomes (see the cautionary tale of the placental microbiome and the ongoing debates about its existence or lack thereof[5,6,7]).

While the author is critical of supplemental probiotics, there is much stronger evidence for specific strains of probiotics influencing gut microbial composition and influencing surrogate markers of health than there is for the concept that fresh produce is a ‘probiotic’ in and of itself. Certainly, there are many reasons to eat fresh produce. To date, there is not good evidence to say that it should be classified as a probiotic as might be the enthusiastic takeaway from the study. A concern that I have from reading this article is that some individuals will not wash produce for fear of cleaning away microbes because they believe there are health benefits from this purported probiotic. Until this is demonstrably shown, consumers should continue following food safety guidelines from the CDC.

Leigh Jones, Head of Training, Oxford University Clinical Research Unit:
The article provides a well balanced discussion of current knowledge surrounding the gut microbiota and benefits of eating whole foods. The author could have provided more details on the limitations (possible confounding variables) of the initial referenced article[1], however this is a minor point. Furthermore, associations between the microbiota and weight gain/loss is currently unclear, which the author should have mentioned, particularly since reverse causation between obesity and a less diverse microbiota is highly possible [i.e. a less diverse microbiota is the result of obesity rather than its cause].

Discussions surrounding the bacteria present in the apple core are interesting although there is no current evidence to suggest that this may contribute directly to the gut microbiota. However, the author is careful not to over-interpret current knowledge. Importantly, the benefits of fibre are accurately described and the article provides a timely reminder that commercial (and largely unregulated) supplements are probably not required by the majority of the population who should instead focus on a balanced diet rich in whole foods.