Four scientists analyzed the article and estimated its overall scientific credibility to be ‘neutral’. more about the credibility rating 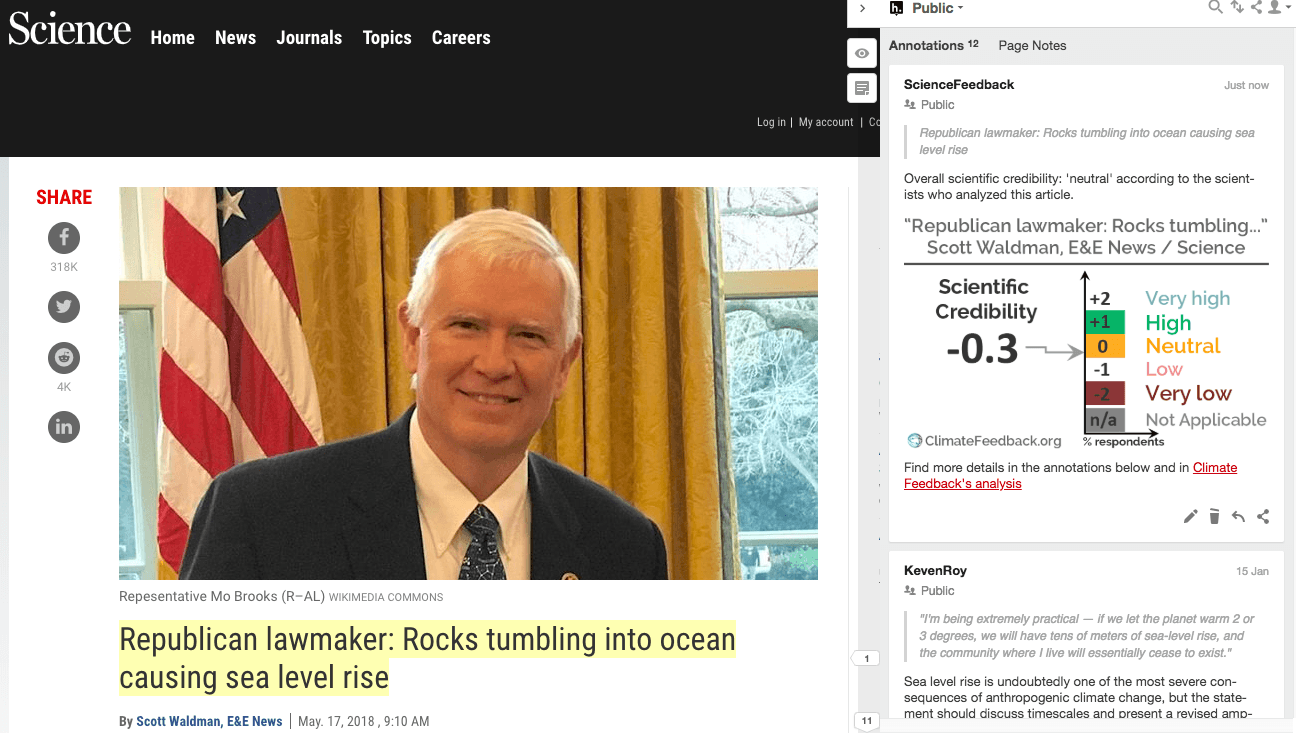 This article in the news section of Science—syndicated from E&E News—covers a hearing of the U.S. House of Representatives Science, Space, and Technology Committee. During the hearing, some committee members made a number of incorrect claims about climate change and sea level rise. Most notably, Representative Mo Brooks claimed that the erosion of coastal rock and sediment could be the real cause of sea level rise. The article focuses on creating an account of statements made by those present at the hearing.

Scientists who reviewed this article provided varying ratings, as the article generally noted that these claims were false but did not always explicitly explain the actual state of scientific knowledge. For example, providing references to published research directly contradicting these claims could have helped readers ascertain the truth.

Andrew Shepherd, Professor, University of Leeds:
The article itself is I believe a well-intentioned attempt to report on what seems to have been a rather chaotic committee meeting; although the meeting topic was intended to be on technologies to mitigate climate change, the discussion concentrated on basic climate change principles and conjecture which the witnesses could reasonably have not expected.

Although the article is good in places, I have graded it as very low credibility because there are several committee member statements that are false and not adequately corrected in the printed article.

1) The article opens with three apparently controversial statements attributed to a committee member that are not immediately corrected with facts, when they could have been: the Earth is warming. Sea level rise due to coastal erosion is insignificant in comparison to other known sources and sinks. The Antarctic ice sheet is not growing.

2) A committee member objects to the suggestion that global warming is man-made, stating that “basically we should all be open to different points of view”. This statement should have been rebutted, as the evidence to the contrary is overwhelming and it is not reasonable to assert that objection to scientific fact or consensus amounts to an alternative point of view.

3) A committee member suggests that land erosion is causing sea level rise: while the witness (Duffy) responds that he is “pretty sure” this is not the case, a factual correction could have been offered to shoot the suggestion down.

4) A committee member suggests that “there are plenty of studies that have come that show with respect to Antarctica that the total ice sheet, particularly that above land, is increasing, not decreasing.” As leader of the international community effort responsible for charting polar ice sheet contributions to sea level rise, I can assure you that this statement is false. There is in fact only one study that reports growth of the Antarctic ice sheet, against all others (dozens) that report that it has lost ice. And the one study[1] that reported mass gains was effectively rebutted by a separate study[2]. For a summary of ice sheet mass balance data, see Figure 1 here.

Benjamin Horton, Professor, Earth Observatory of Singapore:
The article was an appropriate discussion of some very misleading and ill-informed comments by Republicans on the U.S. House of Representatives Science, Space and Technology Committee.

Keven Roy, Research Fellow, Nanyang Technological University:
This article is mostly a descriptive depiction of an exchange between some members of the Space, Science and Technology Committee and a climate scientist. The comments from the members of the Committee suffer from severe inaccuracies and misconceptions, and citations of the invited climate scientist mostly address those issues.

In general, the views that go against our understanding of the climate change process are underlined and presented as such by the author, but rarely supported by statements or explanations that go beyond the immediate replies from the invited climate scientist. Some of the inaccurate statements quoted in the text are thus left with an incomplete challenge. In particular, the concluding statement should have been challenged. The explanations sometimes suffer from imprecise language (land/sea ice, sea level rise timescales) but they are usually adequate.

“I’m being extremely practical — if we let the planet warm 2 or 3 degrees, we will have tens of meters of sea-level rise, and the community where I live will essentially cease to exist.”

Keven Roy, Research Fellow, Nanyang Technological University:
Sea level rise is undoubtedly one of the most severe consequences of anthropogenic climate change, but this statement should discuss timescales and present a revised amplitude. In fact, over the 21st century, estimates of global mean sea level rise are rather in the 1-2 m range[1]. Considering the global mean sea level rise commitment induced by these conditions up to 2300 leads to estimates reaching several meters[1]. Such a change in mean sea level will significantly impact coastal communities around the world.

During episodes in the geological past with similar temperature and CO2 conditions, like the mid-Pliocene around 3 million years ago, sea level may have reached significantly higher values (raising questions about the long-term equilibrium of sea level), but constraining precisely this quantity using the geological record remains challenging.

“I don’t think anybody disputes that the Earth is getting warmer; I think what’s not clear is the exact amount of who caused what, and getting to that is, I think, where we’re trying to go with this committee.”

Keven Roy, Research Fellow, Nanyang Technological University:
The various contributions to recent climate change have been studied extensively by the scientific community, and there is ample evidence of the human influence on the recent climate. The IPCC has identified human activity as the dominant cause of the observed warming since the mid-20th century with an extremely high degree of confidence.

At one point, Smith showed a slide of two charts that he said demonstrated how the rate of sea-level rise does not equal the sharp spike in the consumption of fossil fuels.

Thomas Frederikse, Postdoctoral researcher, Jet Propulsion Laboratory/California Institute of Technology:
This statement is blatantly false: sea-level rise in the 20th century is faster than any time during the last 3000 years[1], while the present-day rate is already three times faster than the 20th-century rate[2].

Duffy pointed out that his chart was from a single tide gauge station, near San Francisco, and that sea levels rise at different rates around the world

Thomas Frederikse, Postdoctoral researcher, Jet Propulsion Laboratory/California Institute of Technology:
This is an important and true statement: sea-level changes differ from place to place. Furthermore, single records often contain a lot of internal variability, which makes it difficult to distinguish anthropogenic changes from the internal variability. Nevertheless, the San Francisco tide gauge shows a sea-level acceleration that is in line with the global-mean value.

He said the California coastline and the White Cliffs of Dover tumble into the sea every year, and that contributes to sea-level rise

Thomas Frederikse, Postdoctoral researcher, Jet Propulsion Laboratory/California Institute of Technology:
Although this effect is not zero, about 1,000 cubic kilometers (i.e. 1,000 rocks of a kilometer long, a kilometer wide, and a kilometer tall) of Dover cliffs must tumble into the ocean to explain the present-day rate of sea-level change. This is many orders of magnitude larger than the ongoing erosion rate.

He also said that silt washing into the ocean from the world’s major rivers, including the Mississippi, the Amazon and the Nile, is contributing to sea-level rise.

Thomas Frederikse, Postdoctoral researcher, Jet Propulsion Laboratory/California Institute of Technology:
Sediment deposition has been acknowledged by scientists, but again, this effect is many orders of magnitudes too small to explain the ongoing rate of sea-level rise.

Duffy responded: “I’m pretty sure that on human time scales, those are minuscule effects.”

Thomas Frederikse, Postdoctoral researcher, Jet Propulsion Laboratory/California Institute of Technology:
Duffy is right: these effects are minuscule compared to ice-mass loss and thermal expansion of the oceans, both of which are directly measured, and explain the observed present-day sea-level rise.

Thomas Frederikse, Postdoctoral researcher, Jet Propulsion Laboratory/California Institute of Technology:
While the extent of Antarctic sea ice is slightly growing, this growth does not affect sea level, because of Archimedes’ law. The land ice of the Antarctic Ice Sheet is shrinking at an accelerating pace, which does result in sea-level rise.

“Well, I’ve got a NASA base in my district, and apparently, they’re telling you one thing and me a different thing,” Brooks said. “But there are plenty of studies that have come that show with respect to Antarctica that the total ice sheet, particularly that above land, is increasing, not decreasing.

“What do you say to people who theorize that the Earth as it continues to warm is returning to its normal temperature?”

Thomas Frederikse, Postdoctoral researcher, Jet Propulsion Laboratory/California Institute of Technology:
This is a fallacy, which has been correctly rebutted by Duffy. What matters is that a large increase in global temperatures is problematic for us humans, who have built a civilisation in a relatively stable climate, and which we are now perturbing far outside this stable range.