Four scientists analyzed the article and estimated its overall scientific credibility to be ‘very high’. more about the credibility rating 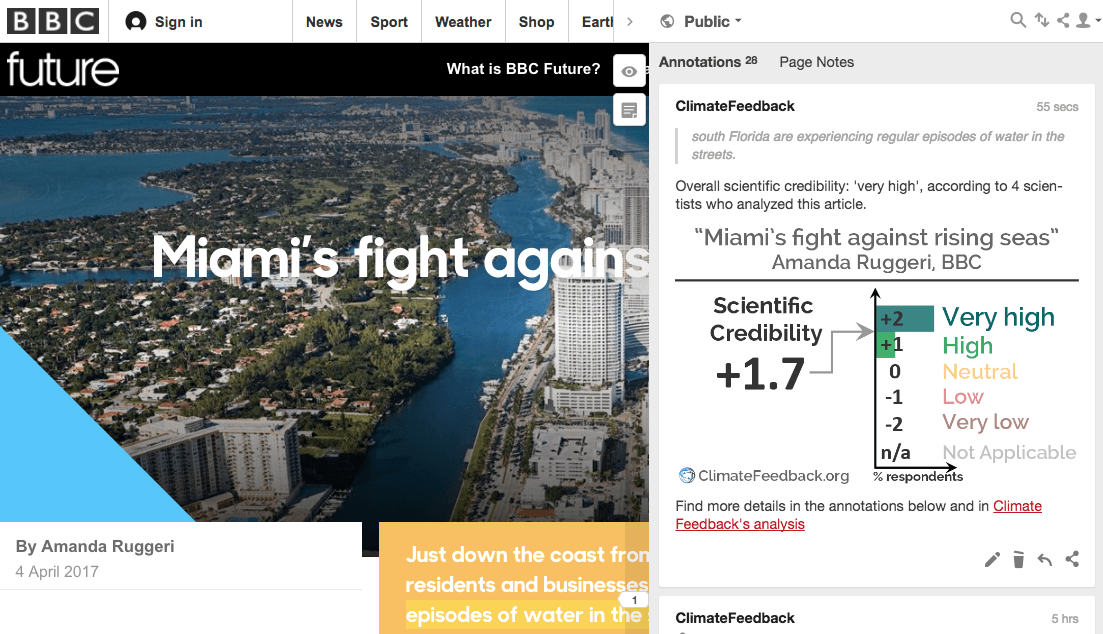 Scientists who reviewed this story found it to be insightful and generally accurate. They note that care should be taken not to misinterpret short-term variations in local sea level rise trends, such as the higher rate of sea level rise in Florida over the past decade, which is not expected to continue over the long term.

Tal Ezer, Professor, Old Dominion University:
The information in this story is generally correct—the frequency and severity of flooding is accelerating due to sea level rise, and the quoted scientists from NOAA and FAU are credible experts in this field.

Andrea Dutton, Assistant Professor, University of Florida:
The article provides many internal references to peer-reviewed research, which supports many of the scientific claims made here, including the observation that in recent years the rate of sea-level rise in southeast Florida has accelerated. Additional insight on the implications of the research is made, including the observation that vulnerable infrastructure situated at lower elevations will be critical to sustain even those structures that are at slightly higher elevation; hence it is not the elevation of your home that is as critical as the elevation of the infrastructure that supports it. However, having argued throughout the piece that sea levels are rising quickly in this region and that a swift, coordinated response is required, I found the ending overly optimistic. It is not helpful to sustain the unrealistic belief that human innovation will enable us to just engineer our way out of this situation in south Florida indefinitely.

1. The 21st Century could see a meter or more of sea level rise as the oceans continue to warm and glacial ice is lost, presenting a threat to low-lying coastal areas like southeast Florida.

“Not only are sea levels rising, but the pace seems to be accelerating”

Benjamin Horton, Professor, Earth Observatory of Singapore:
The largest change in rate of sea-level rise is between the background pre-industrial period and the 20th century. Sea-level rose 1.27 ± 0.09m in northeastern Florida (USA) during the past ~2600 years, a rate of about 0.49 mm/yr. The tide-gauge data from nearby Fernandina Beach, measures 1.91 ± 0.26mm/yr of RSL rise since 1900CE.

Andrea Dutton, Assistant Professor, University of Florida:
It is true that these are commonly used projections in this region. This statement refers to the Unified Sea Level Rise Projection that was produced by the Southeast Florida Regional Compact on Climate Change.

Andrea Dutton, Assistant Professor, University of Florida:
Many projections have been done, but they may very well underestimate the true expected range of scenarios.

“But as more data comes in, even the worst-case estimates may turn out to be too low: for example, researchers recently discovered that ice is melting more rapidly than expected from both Antarctica and Greenland, plus gained a better understanding of how melting ice sheets actually affect sea-level rise. ‘The unlikely scenarios are now, all of a sudden, becoming more probable than they once were thought to be,’ says Sweet.”

Andrea Dutton, Assistant Professor, University of Florida:
This is true, based on the research cited here. The dynamics of rapid ice sheet retreat remain uncertain which introduces uncertainty into the projections.

Andrea Dutton, Assistant Professor, University of Florida:
While the most dramatic effects may not be felt until 50 to 100 years from now, that does not mean that dramatic impacts will not occur before then.

Andrea Dutton, Assistant Professor, University of Florida:
This statement is true based on several different analyses. For example, in a study* that quantified the reduction of flood control capabilities of coastal water control gravity structures owing to increased sea level rise, they found that “sea level change could negatively impact nearly half the coastal flow control structures in the coming decades, unless adaptive measures are implemented to mitigate such impacts.”

2. Over shorter timescales, regional sea level trends can differ significantly from the long-term trend due to additional factors like ocean circulation.

“Sea level rise is global. But due to a variety of factors – including, for this part of the Atlantic coast, a likely weakening of the Gulf Stream, itself potentially a result of the melting of Greenland’s ice caps – south Floridians are feeling the effects more than many others. While there has been a mean rise of a little more than 3mm per year worldwide since the 1990s, in the last decade, the NOAA Virginia Key tide gauge just south of Miami Beach has measured a 9mm rise annually.”

Tal Ezer, Professor, Old Dominion University:
The main reason for higher than normal local sea level rise in places like Miami, FL, and Norfolk, VA, is that in addition to well documented global sea level rise, there are places with local land subsidence and also influence from ocean currents like the Gulf Stream.
The influence of the Gulf Stream on the coast is my expertise*, but the issue is quite complicated. It is true that slowdown of the Gulf Stream will cause sea level to rise along the US East Coast and there are some signs that the Gulf Stream started to slow down due to long-term climate change, weakening the entire Atlantic Ocean circulation. However, short term fluctuations in the Gulf Stream (which may or may not relate to climate change) can also create periods of higher than normal water levels and unpredictable tidal flooding, and this is an area of active recent research.

Stefan Rahmstorf, Professor, Potsdam University:
This statement touches upon several issues that are indeed discussed in the scientific literature and it is essentially correct. Let’s try and disentangle things.

It is correct that Virginia Key as well as other locations on the US Atlantic coast have experienced a surge of rapid sea-level rise during the past ten years or so. However, this is a very short period in terms of sea-level variations. The longer-term rise in this region (when corrected for local land subsidence) is actually in line with the global average sea-level rise, both for the past hundred years (~1.8mm per year) or measured since the early 1990s (~3 mm per year). The recent rapid rise is thus likely a short-term natural variation (a possibility mentioned later in the article) and may well be followed by a period of very little rise. In the longer run I would expect that sea-level near Miami would continue to increase roughly in line with the global mean sea-level rise, as is indeed discussed later in the article where the future projections with their uncertainties are covered well.

Like with sea level, over the short time scale of the past decade this is likely to be dominated by natural variability, although there are also indications of a longer-term, probably human-caused, downward trend. Greenland melting has not caused this, but likely contributed to it.

To what extent the Gulf Stream weakening explains the recent rapid sea-level rise in Miami, and to what extent other factors—like changes in the predominant winds—are responsible remains an open research question.

Benjamin Horton, Professor, Earth Observatory of Singapore:
True: Sea-level rise in Florida is the result of a variety of factors. But the influence of a weakening Gulf Stream will be felt more in the northeast of the US than Florida. Furthermore, land level subsidence due to glacial isostatic adjustment is less in Florida than the mid and northeast Atlantic.

With respect to melting from Greenland, yes, Florida will feel a greater impact than regions to the North. But the rate of rise will be less than the global average.

Andrea Dutton, Assistant Professor, University of Florida:
The hypothesis that (a) the Gulf stream has weakened over this time interval and (b) that it is the primary driver of sea level rise acceleration seen farther north along the U.S. Atlantic coast is still debated (see for example, Kopp 2013)*.

“Can we definitely say it’s the ocean warming?” says Sweet, who has authored several sea-level rise studies. “No. But is it indicative of what we’d expect to see? Yes.”

Andrea Dutton, Assistant Professor, University of Florida:
It is not yet clear what is causing the recent uptick in the rate of sea level rise in this region over the past several years, which is not similarly recorded at tide gauges north of Cape Hatteras according to the NOAA tide gauge data. If, however, this quote refers to the long-term trend of sea-level rise in this region, then it is correct and consistent with the analysis of the latest IPCC report* (Church and Clark, (2013) Chapter 13, IPCC AR5).