Six scientists analyzed the article and estimate its overall scientific credibility to be 'neutral'. more about the credibility rating 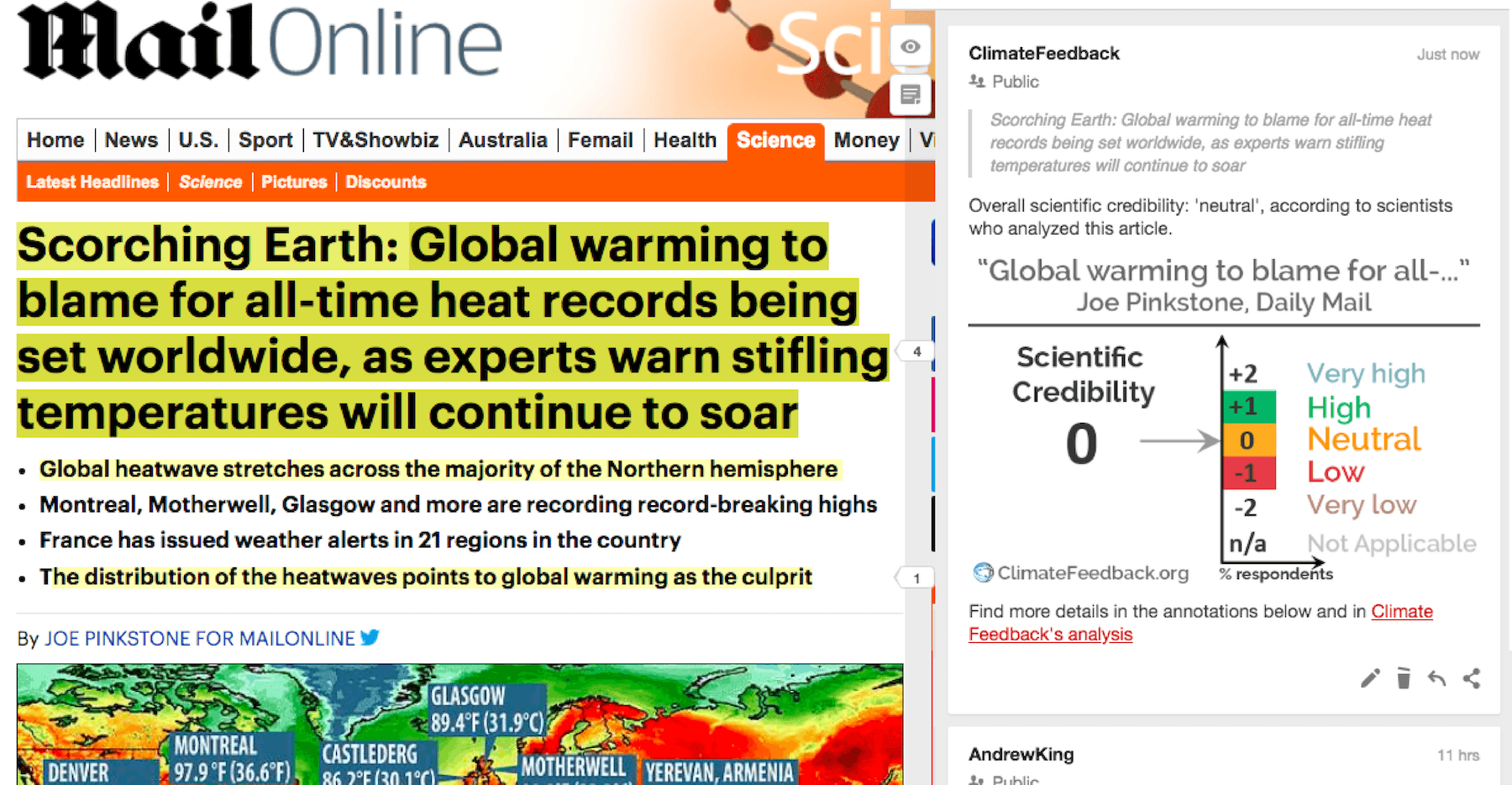 This article in the Daily Mail describes recent record warmth occurring in a number of different places. But while the article is correct to note that climate change results in more frequent and stronger heatwaves, scientists who reviewed it found that the article (and particularly the headline) is not entirely accurate in its explanation of how these heatwaves relate to climate change.

Caroline Holmes, Polar Climate Scientist, British Antarctic Survey:
Although global warming goes hand-in-hand with more frequent and more intense heatwaves, there are inaccuracies in this article. First, while many records have been broken in many countries and regions, the claim that it is a ”global heatwave” is misleading. Second, while climate change has been shown to lead to more frequent and more intense heat waves, the claim that the spatial scale is the key feature linking these heatwaves to global warming is unsupported, although it does make sense. Finally, while global warming makes heatwaves more likely, it is not correct to say global warming caused a given heatwave. However, statements about weather such as this becoming normal in future are accurate.

Daniel Swain, Researcher, UCLA, and Research Fellow, National Center for Atmospheric Research:
This piece provides some insights into the widespread character of recent extreme summer heat across much of the Northern Hemisphere. However, the headline is misleading and the discussion misconstrues the nature of the relationship between global warming and heatwaves.

Irene Brox Nilsen, Researcher, Norwegian Water Resources and Energy Directorate:
The statements in the article correspond to generally accepted scientific claims: summers (as well as other seasons) get hotter; it is difficult to attribute one event to climate change but the extent of the warming hints to a large-scale underlying process; if we do not reduce greenhouse gas emissions, such heat waves will become more frequent in the future.

Proper reservation is taken in the text (“The scale of this latest phenomenon suggests global warming”, indicating that other mechanisms also play a role). The title does not take proper reservation, but that’s not to be expected from a newspaper.

Andrew King, Research fellow, University of Melbourne:
Mostly this article is accurate in its reporting of the recent heat over North America and Eurasia. However, there are a few misleading statements—including the headline—that exaggerate both the scale of the event and the likely role of climate change. Given that this is a major heat wave and that climate change has likely played some role in the extreme temperatures, it is remarkable that the article still manages to exaggerate both.

Without a full analysis of this particular event, we can’t explicitly blame global warming for it. It is likely that the weather patterns that are bringing this heat have not changed in their frequency too much, but that the temperatures are a little warmer than they would have been under analogous weather patterns in the past.

We are experiencing more heat records in general due to human-caused climate change and this has been shown for many regions of the world.

Global warming to blame for all-time heat records being set worldwide, as experts warn stifling temperatures will continue to soar

While it is true that global warming is contributing to the increased frequency/intensity of global heatwaves in general, it is misleading to claim that it is singularly “to blame” for the present heat extremes.

This “key point” does not correctly convey the linkage between global warming and heatwaves. The implication here is that the widespread spatial distribution of this particular heat event makes it characteristic of global warming. This is not a correct inference from climate science. Instead, it is the sustained long-term trend toward increased frequency/intensity of such events that links global warming to heatwaves in aggregate*.

Global heatwave stretches across the majority of the Northern hemisphere

While many regions are experiencing heatwaves, I have not seen evidence that it is the majority.

Geert Jan van Oldenborgh, Senior researcher, KNMI (The Royal Netherlands Meteorological Institute):
The image below shows the hottest daily maximum temperature of the year so far (plus a 10-day forecast for good measure) compared to other years in 1979-2017. As you can see, only a few isolated spots have had record-high temperatures so far. Ireland and Scotland are indeed among them, and so is NE Siberia and a few areas in Canada. However, it is hardly a Northern hemisphere-wide heat phenomenon. 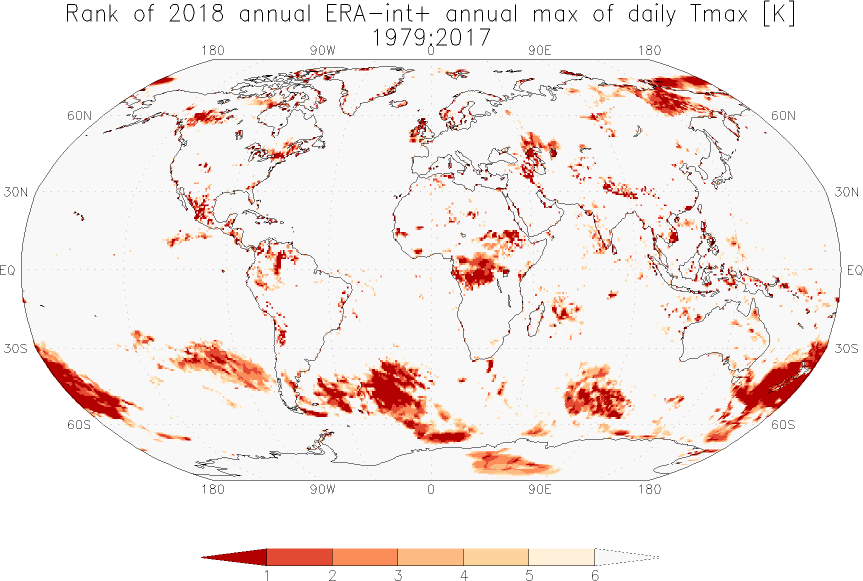 the highest temperature ever recorded in Scotland

This record has not been accepted by the UK Met Office, so the record high temperature for Scotland remains 32.9°C in August 2003

The heatwave has spread across the world

Here and in other places in the article there are unhelpful exaggerations and hyperbole that provide a slightly misleading representation of this event.

While an isolated heatwave can be put down as an anomaly, the scale of this phenomenon points to global warming as the culprit, scientists said.

Here again: the implication is that the widespread spatial distribution of this particular heat event makes it characteristic of global warming. This is not a correct inference from climate science.

I am not aware of literature that links the spatial scale of heatwaves, as opposed to their frequency and intensity, to global warming. Naturally as heatwaves in individual locations become more frequent, it makes some sense that them happening simultaneously also becomes more frequent, but I’m not aware of literature explicitly addressing it. It is not clear which ‘scientists said [this]’; the quote by Friederike Otto does not relate to this claim.

‘Summers keep getting hotter,’ said Friederike Otto of the University of Oxford, who conducted extensive research into data from the heatwave that spread Europe in June, July and August 2017.

‘Heatwaves are far more intense than when my parents were growing up in the 1950s.

‘If we do nothing to reduce our greenhouse gas emissions, the kind of extreme heat we saw this past summer will be the norm when my young son is a grown man.’

Geert Jan van Oldenborgh, Senior researcher, KNMI (The Royal Netherlands Meteorological Institute):
The quotes from Friederike Otto were taken from an analysis of last year’s heat in the Mediterranean and do not apply to the current situation.

Friederike Otto, Deputy Director Environmental Change Institute, University of Oxford:
We do expect the likelihood of heatwaves to increase with increased warming and in many attribution studies we have seen that. But heatwaves do not change uniformly over the globe, with Europe seeing a much more rapid increase than the US. So the numbers given in my quote, even if they were very rough (rare in the 1950s, not so rare now, quite common in 15 years) will not apply to this particular very large heatwave in the same way.

Records all around the world have been shattered as the entire planet is in the grips of a vicious heatwave (pictured).

This image does not show anything about whether the entire planet is in the grips of a vicious heatwave. It looks ”hot” because it is red, but shows actual temperature rather than anomalies and therefore doesn’t show, except for the labels, anything about heatwaves.

The scale of this latest phenomenon suggests global warming is to blame, scientists have cautioned.

As I state above, the quotes from scientists in this article do not seem to be related to this statement.

Recent research shows that even under the Paris Agreement global warming limits, hot extremes like these will become more common*1. Other research has also demonstrated this to be true across Europe*2.

On the other side of the Atlantic ocean, climates are typically milder as a result of the cooling from the Gulf Stream.

The gulf stream brings a milder, warmer, winter climate to Europe. During this heatwave, the ocean may have a cooling effect (absorbing heat), but in that case, it should have said “this particular heatwave experiences cooling from the Gulf stream”. This distinction in time scales is the important difference between weather and climate.

The phrase “mild” is confusing. The Gulf Stream effect on British climate is normally emphasised in winter, since warm water makes Europe warmer (and therefore, in winter, milder) than it would be.

But despite [the Gulf Stream], the summer of 2018 looks set to be one of the hottest on record.

The Gulf Stream is irrelevant actually: it moderates the average temperature (i.e., climate) but this article is about variability. Even if the Gulf Stream makes temperatures cooler on average in summer (see my note above), this does not make it more remarkable that this year’s temperature are the hottest on record.

Quriyat, in Oman, also recorded the highest nighttime temperature ever recorded on the planet, hitting 121.6°F (49°C) on June 26, falling just two degrees short of the all-time heat record for the country, which stands at 123.4°F (50.7°C). The latest records come months after Pakistan posted the hottest temperature ever seen on Earth.The sun was so intense, it took the mercury up to in excess of 120°F as it topped out at 122.4 °F (50.2°C).

This section is somewhat confusing, but in any case 123 °F is not the hottest recorded temperature on Earth. This error probably stems from April of this year, when Pakistan likely set a new global temperature record for the month of April.