Seven climate scientists have analyzed the article and they have 'contrasted' estimations of its overall scientific credibility. more about the credibility rating
A majority of reviewers tagged the article as: Alarmist. 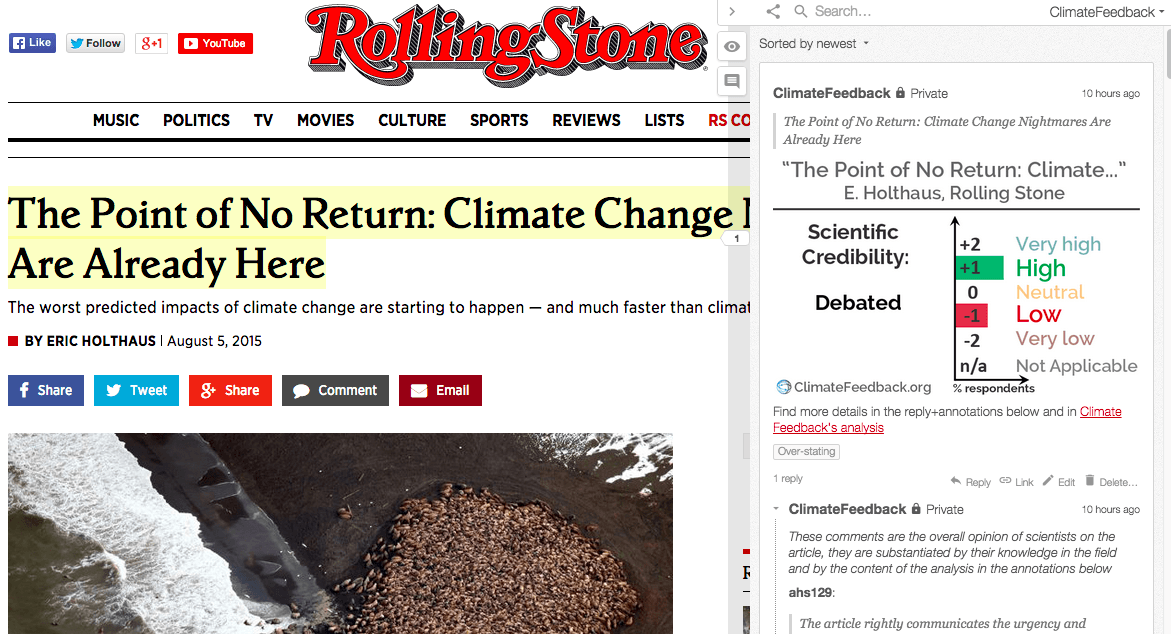 While the information within the article is mostly accurate, the main issue for scientists is the article’s framing of the information. More specifically, the article implicitly attributes many weather events to human-induced climate change, while the influence of human activity on these events is not always supported by science, or is at the frontier of scientific knowledge and still debated.

UPDATE (12/08/15): Several scientists complained that the article lacked references to support its claims. It should be noted that the references were removed from the text during the editorial process. Read the author’s response

The article rightly communicates the urgency and seriousness of human-induced climate change, describes many current events and trends well, and contains no outright incorrect statements that I could find. However, by the title, subtitle, and overall framing, it is likely to give an impression that some current events can be attributed to human influence for which the scientific evidence supporting such an attribution is either weak or non-existent.

Alexis Berg, Associate Research Scholar, Princeton University:
The author focuses on recent climate extreme events and ecological observations, builds on recent controversial or alarming claims and/or studies about climate change, and tries to weave together a narrative that things are happening faster/are worse than was expected. In my view, while the article is not technically inaccurate (save for a few instances), and while I appreciate the need to raise public awareness of the potentially worst-case climate-change scenarios, I find this unbalanced approach regrettable.

Michael Henehan, Postdoctoral Researcher, GFZ Helmholtz Centre Potsdam:
The article is largely well researched, although sometimes a somewhat alarmist message is extrapolated from science that is still debated. Sometimes too few details of the study that the article is referring to are given- it would be better if the article linked to the studies it cites in the text, to give a context to the quotes from researchers.

Emmanuel Vincent, Research Scientist, University of California, Merced:
I did not identify major inaccuracies in the article. The overall conclusion of the author that climate change is an important issue with large potential consequences –notably on marine life– is supported by the science. Some statements however are still debated in the scientific community or weakly supported and should be explicitly presented as such. Solid references should be provided for key claims.

“For pieces like these, a separate editor usually writes the headline, and that was the case in this piece. In many cases, the headline is written before the article text is final, which was also the case for this piece. I agree that the headline framing probably adds to the scientists’ impressions that the article is taking a step beyond consensus science, but I’m encouraged that the majority of scientists felt the article’s overall scientific credibility was “High”. I’d also note that this article was a product of compromise language between myself and editors and fact checkers. There are places where I wanted to add additional qualifications that didn’t make it into the final version, as is also typical for articles written for the popular press. Upon request from many of the scientists here, Rolling Stone has agreed to include several of the links to original scientific research that were used during the rigorous internal fact-checking process.”