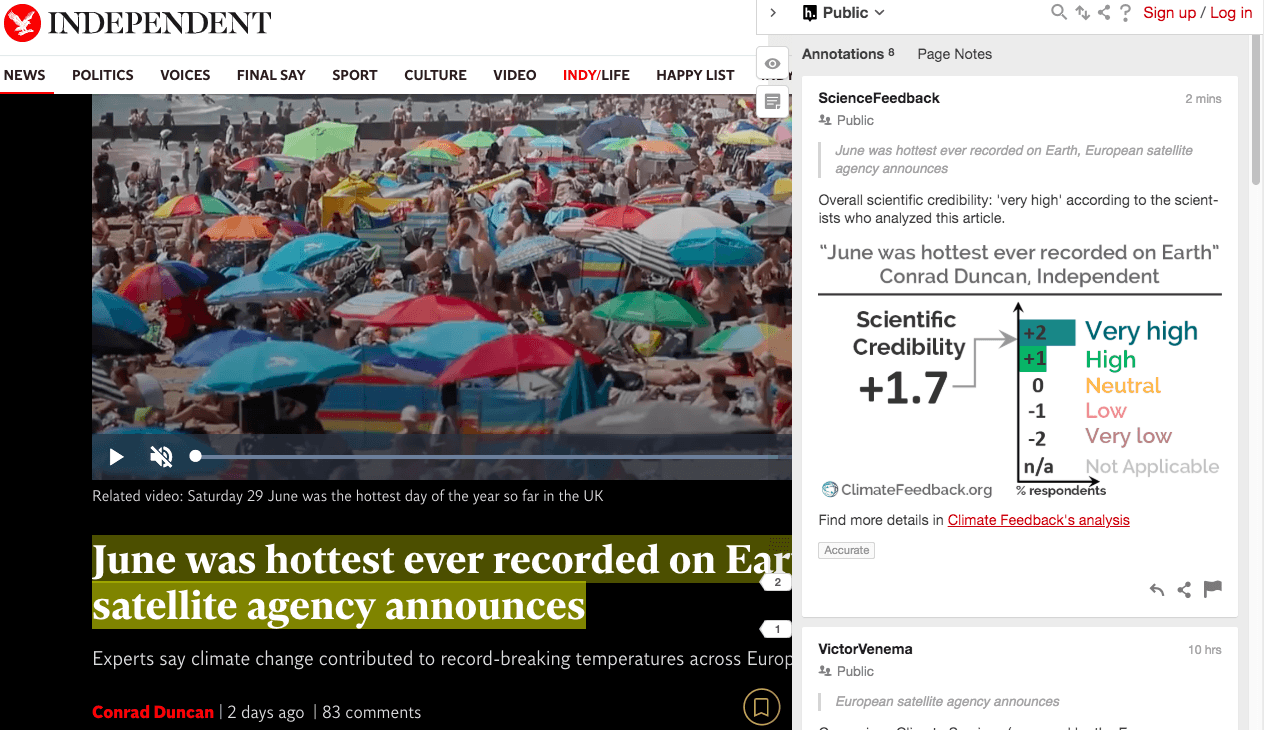 This article in The Independent covers the release of June monthly average temperature data for Europe—which shows it was the warmest June on record by a significant margin—as well as an analysis of how climate change contributed to the extreme heat wave at the end of the month. The article was widely shared across social media, with over 325,000 engagements on Facebook and Twitter at the time of the review.

Scientists who reviewed the article found that it accurately summarized this information, although it did not link to the primary sources. (However, a correction notice added shortly after publication notes that “A previous headline on this story suggested June was the hottest month ever recorded. Instead, it was the hottest June ever recorded. The headline and article have been amended to reflect this.“)

Willem Huiskamp, Postdoctoral research fellow, Potsdam Institute for Climate Impact Research:
The article accurately and clearly states the facts regarding the recent extreme heat in June 2019 and its link to anthropogenic warming. This includes acknowledging that, at this point, this June record and its connection to climate change is based on only a single temperature product and one attribution study, and that further analysis may slightly change the initial conclusions drawn by researchers.

Victor Venema, Scientist, University of Bonn, Germany:
A decent summary of the European heat wave in June 2019. If anything the article understated how exceptional the weather was.

Copernicus Climate Services (managed by the European Centre for Medium-Range Weather Forecasts) also uses satellite data, but it is not a satellite agency, that would be ESA. I would suggest calling it a Climate Research or Climate Data Agency.

The main source of this article is this press release by Copernicus Climate Services.

It is not a good idea to combine numbers for the full month and all of Europe with numbers for a few days and a part of Europe. That double difference makes it hard to understand and easy to miss one of the differences when casually reading it.

6-10 degrees Celsius for the entire month would have been special, but for a few days it is not.

European average ​temperatures were more than 2C above normal

European temperature this year in June were 2°C above the average over the period 1981 to 2010 (which was already warm due to man-made global warming).

Climatologists call such averages over 30 year periods climate normals, a tradition that started before we knew about climate change. This technical term is probably best not used when writing for a general audience.

The article understates how special the weather was by not mentioning that this average is 1°C above the previous record in 1999. And that it is about 1°C above the long-term warming trend, which is a rare outlier.

Rapid assessment of average temperatures in France between 26-28 June showed a “substantial” increase in the likelihood of the heatwave happening as a result of human-caused global warming, experts at the World Weather Attribution group said.

This part of the article is based on this press release by the World Weather Attribution group.

1.5C in European temperature over the past 100 years

That is also a reasonable estimate for the warming over land globally. (This is a global land warming estimate by Berkeley Earth; please take the values before 1900 with a pinch of salt.)

Heatwaves occur in any climate, but we know that heatwaves are becoming much more likely due to climate change.

That is right. See for example the IPCC Special Report on Extremes.