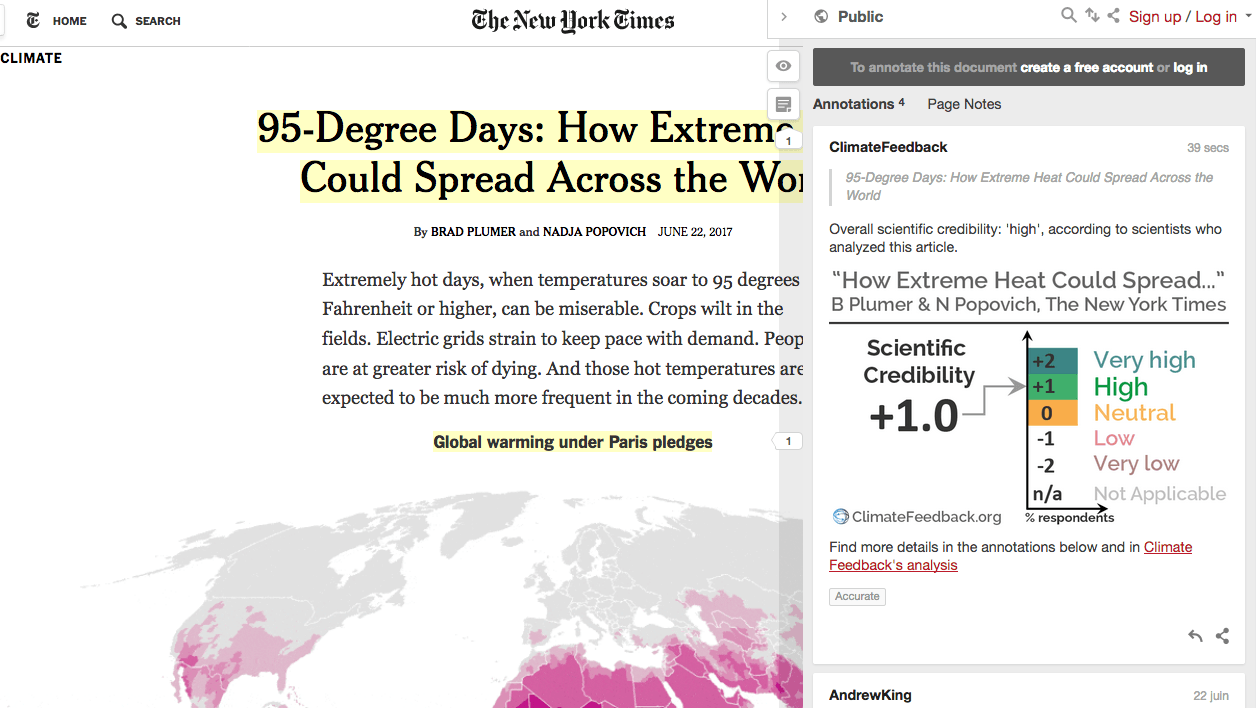 This article in the New York Times is organized around maps of projected increases in extremely hot weather because of human-caused climate change. Scientists who reviewed the article indicate that climate model projections are accurately represented, and some of the impacts of hot weather (e.g. impacts on health, crop yields)  are briefly summarized.

Camilo Mora, Assistant Professor, University of Hawaiʻi at Mānoa:
Overall, I think this is a great article and tool. We certainly need to increase people’s understanding of this problem and this certainly helps with that.

Kristie Ebi, Professor, University of Washington:
The article describes projections of extreme heat days by the end of the century, providing further support for a well-known risk of climate change. The projections are based on exposure-response relationships from a period when there was generally low awareness of the risks of extreme heat. Awareness has been increasing with the frequency and intensity of heatwaves, as has implementation of heatwave early warning systems and other adaptation options, resulting in a decline in heat-related mortality in recent years in many locations. As heatwave-related mortality increases, it is difficult to imagine individuals and governments not taking action to reduce risks. Much better understanding is needed of how to motivate a proactive adaptation. The extent to which air conditioning could be an effective option in low and middle income countries will depend on how development will evolve in these countries, including electrification. The projections confirm the importance of rapid reductions in greenhouse gas emissions to avoid larger risks later in the century.

Andrew King, Research fellow, University of Melbourne:
The article is accurate and interesting. I think there could be more clarity around the global warming trajectories that are used here, but otherwise the article is very good.

Steven Sherwood, Professor, University of New South Wales:
The study’s claims all appear to be based on sound, peer-reviewed research. The claims are in line with longstanding predictions and are not cherry-picked or unrepresentative, although there are uncertainties as always in any prediction.

Continued greenhouse gas emissions will cause Earth’s climate to warm, which means (in part) that extremely hot days will occur more frequently.

Andrew King, Research fellow, University of Melbourne:
There is a risk that some people might confuse the term “Paris pledges” with the 1.5- and 2-degree C targets that came out of the Paris Agreement.

“In this scenario, countries would take some measures, but not drastic ones, to curb emissions — roughly the trajectory of the current pledges under the Paris climate agreement.”

Andrew King, Research fellow, University of Melbourne:
The article doesn’t hide the fact that there is fairly high uncertainty in these projections. This helps the reader understand the confidence in the projected changes.