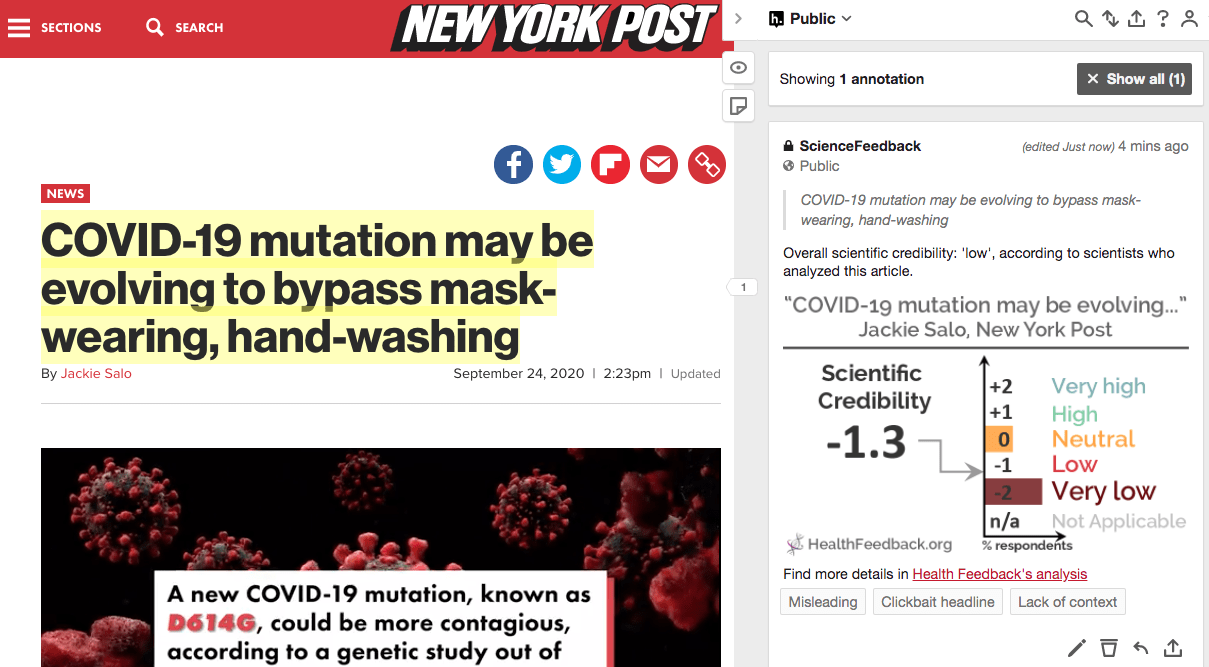 This article published by the New York Post on 24 September 2020 claims that a mutation could enable the virus that causes COVID-19 to evade hand-washing and mask-wearing. The New York Post article’s content is based on an earlier article by the Washington Post, published on 23 September 2020, reporting findings from a preprint study by Long et al[1]. The article went viral on Facebook, receiving more than 100,000 interactions and 26,000 shares on the platform to date, according to the social media analytics tool CrowdTangle.

Scientists who reviewed the New York Post article found it contained inaccurate and misleading statements, and was of low scientific credibility overall. Danielle Anderson, a virologist and assistant professor at Duke-NUS Medical School, pointed out that the preprint contained no data that supports the article’s claim in the headline. A preprint is a research paper that has not been peer-reviewed by other scientists yet. “There is no evidence or implied evidence in the preprint that the physical properties of a G clade virus (a strain carrying the D614G mutation) would render that strain resistant to detergent used in hand-washing. Nor were there aerosol studies in the preprint which indicate that physical distancing is ineffective against strains with the D614G mutation,” she said.

Likewise, Emma Hodcroft, a postdoctoral researcher at the University of Basel who is a co-developer of the Nextstrain project that studies the evolution of pathogens including SARS-CoV-2, told Health Feedback, “The preprint that the article focuses on actually says nothing about the most egregious claim made in the article: that the virus is evolving to get around hand-washing and masks.”

The goal of the study by Long et al. was to understand how the virus evolved over the course of two COVID-19 disease waves in Houston, Texas, which occurred between March and July 2020. In addition, the researchers sought to infer potential relationships between the virus’ evolutionary trajectory and patient characteristics, such as disease severity and demographics. To do this, the researchers sequenced the genomes of more than 5,000 virus samples and studied the clinical outcomes of more than 55,000 patients.

They identified a specific mutation in the spike (S) protein of the virus called D614G, which was predominant among virus samples. The S protein is located on the surface of the virus, and allows the virus to bind to and infect human cells. The D614G mutation specifically leads to a substitution of an amino acid called aspartic acid (D) for another amino acid named glycine (G). This substitution occurs at position 614 in the sequence of amino acids that make up the protein, hence the mutation’s name.

D614G was previously described by several other research groups, as this Nature news article reports. Indeed, the mutation was first observed in many virus samples collected in China and Germany in late January 2020 by Korber et al[2], who proposed that the D614G mutation could render the virus more transmissible.

In the case of the preprint by Long et al., the researchers observed that people infected with virus strains with the D614G mutation had a higher amount of virus in the nasopharynx (the upper part of the throat) compared to people infected with a strain that did not have the mutation. This is possibly due to an improved ability to infect cells in the nasopharynx, although whether this is truly the case is still unclear, as it was not investigated in the preprint study.

The claim that the mutation allows the virus to evade hand-washing and mask-wearing, which are recommended as effective preventative measures to reduce the spread of COVID-19, stems from David Morens. Morens, a scientist at the U.S. National Institute of Allergy and Infectious Diseases (NIAID) and senior adviser to NIAID director Anthony Fauci, stated in the Washington Post article, “Wearing masks, washing our hands, all those things are barriers to transmissibility, or contagion, but as the virus becomes more contagious it statistically is better at getting around those barriers.”

However, current evidence does not support this speculation. Furthermore, the preprint by Long et al. never investigated whether virus strains with the D614G mutation were better at overcoming mask-wearing and handwashing.

Scientists also took to Twitter to highlight the fact that Morens’ statement was unsupported:

I don’t even know what to say about this other than the study doesn’t show this and it’s not good messaging. pic.twitter.com/TXkskfdtjR

Mutation is a normal thing that viruses do but it’s limited to changing how the viral genome or proteins function. It can change the way the virus replicates or interacts with its host.

It does not make super viruses that can transcend a mask or be impervious to soap and water. https://t.co/jMHZzq8En4

Muge Cevik, a clinical fellow at the University of St. Andrews who specializes in infectious diseases, highlighted that much of the context provided in the Washington Post article was not included in the New York Post article. For instance, the New York Post omitted quotes from other scientists emphasizing the uncertainty about whether the D614G mutation impacts virus transmissibility or clinical outcomes.

For instance, Kristian Andersen, an immunologist at the Scripps Research Institute, told the Washington Post that the preprint “just confirms what has already been described — G increased in frequency over time,” and, “we don’t know if any of [the mutations catalogued in the preprint] have any functional relevance.”

In the same Washington Post article, Peter Thielen, a molecular biologist at Johns Hopkins University, cautioned that scientists need to conduct more research to determine “if SARS-CoV-2 transmissibility is truly increased as a result of these mutations.”

Trevor Bedford, an associate professor at Fred Hutchinson Cancer Research Center who studies virus evolution, explained in this Twitter thread that there is still uncertainty over whether the D614G mutation does indeed result in increased transmissibility, as posited by Korber et al:

I wanted to address the hypothesis put forward in Korber et al (https://t.co/ouM4IUyNrd) that the mutation in spike protein D614G causes an increase in transmissibility of SARS-CoV-2 virus. I find this hypothesis to be plausible, but far from proven. 1/16

Although the Washington Post article is more accurate, it received fewer interactions on Facebook to date (51,000 interactions and 14,200 shares according to CrowdTangle) than the inaccurate article by the New York Post.

Cevik emphasized that hand-washing and mask-wearing are still effective methods for reducing the spread of COVID-19. “If the virus becomes more contagious, there’ll be more chances of transmission, but that does not mean mask-wearing or hand-washing is not going to be helpful,” she said.

In summary, the New York Post article provides readers with an inaccurate and misleading interpretation of a preprint. It promotes a speculation unsupported by data and omits important context that would enable readers to understand the level of uncertainty regarding the implications of the virus’ mutation. There is no scientific evidence supporting the claim that the virus is evolving to overcome hand-washing and mask-wearing. Instead, the evidence supports the practice of both measures as effective ways to reduce the spread of COVID-19.

The article on medXriv is essentially an epidemiological study looking into the prevalence of different SARS-CoV-2 strains over two waves of infection. There are multiple reasons for one strain to become predominant over another in a population, such as a particular strain becoming more transmissible, but also geographical limitations imposed by control measures, such as border closures and quarantine, for example.

The comments about the virus evading handwashing and social distancing were made by a reviewer of the manuscript, but these comments do not actually reflect any of the data in the manuscript and so are misleading. There is no evidence or implied evidence in the preprint that the physical properties of a G clade virus would render that strain resistant to detergent (used in hand-washing). Nor were there aerosol studies in the preprint which indicate that physical distancing is ineffective against strains with the D614G mutation.

The preprint that the article focuses on actually says nothing about the most egregious claim made in the article: that the virus is evolving to get around hand-washing, masks, etc. This comes from a quote from someone who’s not an author on the preprint, giving an opinion about the preprint…on a topic not covered by the preprint. However, as the New York Post article covers almost nothing else, I’m evaluating it based on the headline and its repetition of this quote. I do think most of the blame here lies with David Morens of NIAID for giving such a quote—the rest with the New York Post for not seeking any further clarification or a second opinion, and running with a clickbait headline.

The New York Post article’s headline is misleading because it is based on a quote by a scientist, but does not actually reflect what the scientist said.

“COVID-19 mutation may be evolving to bypass mask-wearing, hand-washing” is the headline of the article, but the quote of the scientist is “Wearing masks, washing our hands, all those things are barriers to transmissibility, or contagion, but as the virus becomes more contagious it statistically is better at getting around those barriers.” Therefore the headline does not really reflect what the scientist has suggested.

Also, there are multiple scientists quoted in the Washington Post article, but only the part mentioned above was included in the New York Post article.

In particular, these two important quotes were omitted from the New York Post article:

“Kristian Andersen, an immunologist at the Scripps Research Institute in California, who was not involved in the new research, downplayed the significance of the new study. He said it ‘just confirms what has already been described — G increased in frequency over time.’ As for the numerous other mutations the study finds, ‘they just catalogue them, but we don’t know if any of them have any functional relevance.’”

“Peter Thielen, a molecular biologist at the Johns Hopkins University Applied Physics Laboratory, said scientists will need to continue studying the virus to see whether the new mutations identified by the Houston researchers change the ‘fitness’ of the virus, ‘and if SARS-CoV-2 transmissibility is truly increased as a result of these mutations.’”

After reading the Washington Post article, one gets an accurate understanding that mutations occur over time, and this one may be influencing the transmissibility, but we don’t know the significance of this yet. However, the New York Post article leaves the reader with the impression that the virus definitely became more infectious and that mask-wearing is less useful, so I believe the article is misleading.