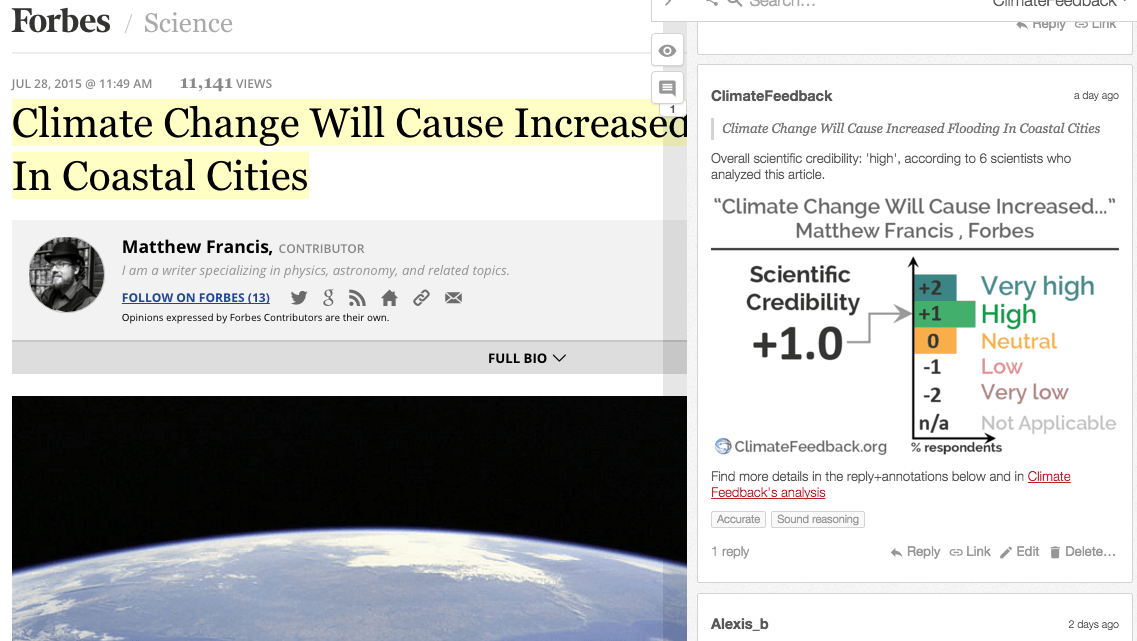 This article provides a fair and balanced discussion of two recent scientific studies on the magnitude of the sea level rise that can be expected this century as a result of human-induced climate change.

If the link does not work due to the high number of ads on Forbes, install Hypothesis bookmarklet or extension in your browser and switch it on from the article page.

Tad Pfeffer, Professor of Glaciology, University of Colorado
A clear statement of the content of a controversial paper, with an accurate description of the source of controversy. I think this is a good piece of science journalism, in which the author gives an even-handed account of the position taken in the Hansen et al piece, and also describes the informed opposition to the Hansen’s conclusions, as articulated in Kevin Trenberth’s response (also cited in the piece). The author’s scientific credentials show in his writing, even though he does not come down on one side or another of the controversy.

David Bahr, Associate Professor, Department of Physics, Regis University and Institute of Arctic and Alpine Research, University of Colorado
The article discusses a manuscript that is still under “open access” review, so naturally there is still significant (and public) discussion about the details among scientific reviewers. Overall the article is accurate, though some of the language is a little skewed. For example, the author says climate deniers “may not have science on their side,” but that should be “do not have science on their side.” Likewise, by calling Hansen’s work “alarmist predictions,” the author uses language that is common to climate deniers and introduces a subtle bias that is unfounded until the review process is complete. Nevertheless, the article is reasonable, and it correctly states that sea level rise is a real problem regardless of this particular Hansen publication.

Ted Scambos, Senior Research Scientist, National Snow and Ice Data Center
The article is accurate enough in its discussion of the threat, and the Hansen paper, but understates the nature of the concerning issues with the Hansen et al. extrapolation and concluding estimates. Hansen et al. estimates are based on a somewhat adhoc amplification of the contribution from the ice sheets based on the past two decades’ observations. If we have seen an approximate doubling every decade, then (having eight decades left in this century) we might anticipate at least a 2^8 (256-fold) increase in mass loss from the ice by 2100 – says Hansen et al. This ignores fundamental issues with the mechanics of this ice loss, e.g. in glacier speeds or in surface melt rates. This was discussed in part in an earlier paper by Pfeffer et al., in 2008.

Rasmus Benestad, Meteorologisk Institutt
The article does not explain that the IPCC numbers tend to exclude collapse from landfast ice, wheras Hansen et al place a great deal of emphasis on land ice. Also it is diverted by an argument about ENSO (El Niño), which is not relevant for the analysis by Hansen et al, as ENSO involves much shorter time scales.

Alexis Berg, Postdoctoral Research fellow, Columbia University
This article reports on two recent papers about climate change and sea-level rise. The author places the articles in the context of current scientific thinking rather accurately. He should have mentioned that Hansen’s paper is not published yet, and could also have provided more quantitative information on the topic.

[2] Each evaluation is independent. Scientists’ comments are all published at the same time.