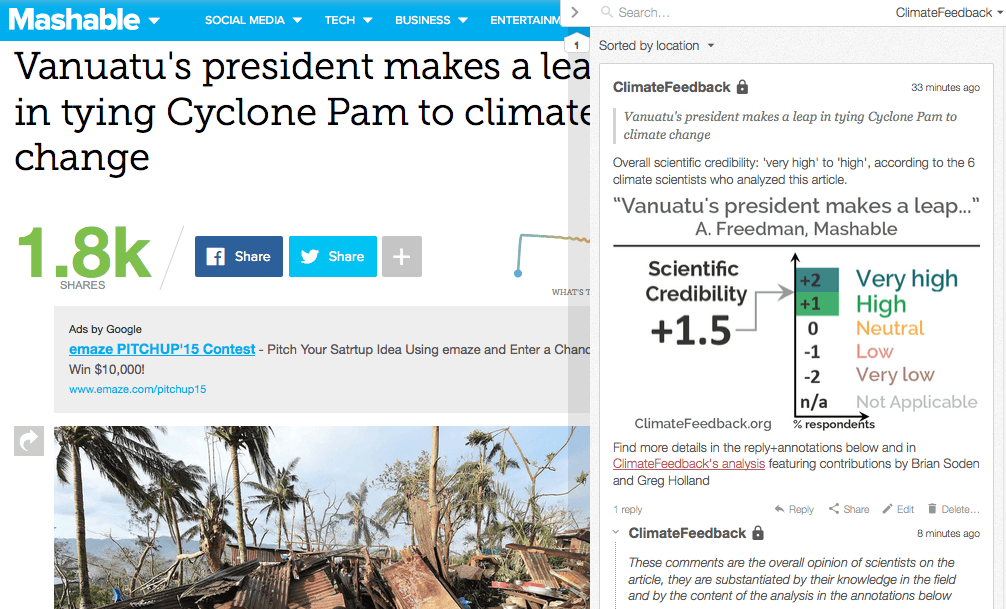 The main reason for the positive evaluation is that the author successfully places Cyclone Pam within the larger context of climate change and its’ effect on tropical cyclones, and does so by effectively calling on several scientists with expertise in this field.

Brian Soden, Professor at the University of Miami
All of the scientists quoted in that article are reputable, well-respected experts on the subject. The extent to which there’s a diversity of expert opinions expressed in that article concerning the connection between Pam and anthropogenic global warming accurately reflects the degree of scientific uncertainty on the matter and the various ways in which climate change can influence tropical cyclones. For example, sea level has undoubtedly risen due to anthropogenic activities and this certainly increases the storm surge. Likewise, higher moisture contents in the atmosphere lead to higher rainfall amounts in tropical cyclones. The impact of anthropogenic climate change on TC intensity is less clear, and this is reflected in the comments of those quoted.

Greg Holland, Willis Senior Scientist and Leader of Regional Climate Section, National Center for Atmospheric Research
A growing body of published evidence is pointing towards there being substantially more intense tropical cyclones as a result of climate change. And this is not just in the future. Recent studies by us have indicated a substantial increase in the proportion of Category 4 and 5 cyclones both globally and in individual regions that is strongly related to the global surface temperature increases that have already occurred. For the western South Pacific the proportion of Cat 4-5 cyclones has more than doubled in the last 30 years[1]. Thus, the chances of a Pam occurring have increased substantially because of climate change.

Jim Kossin, Research Scientist, NOAA's Center for Weather and Climate:
An insightful and timely article. There are some statements quoted that are not easily supported and may be overstating the direct impacts of climate change on Cyclone Pam, but the overall message is reasonable.

Dan Chavas, Assistant Professor, Purdue University:
Overall it’s a nice, well-written article that hits most of the key points regarding the complex question of how global warming may affect tropical cyclones. The main issue is with the comments quoted from one of the “experts”, Kevin Trenberth, that are misleading.

Emmanuel Vincent, Research Scientist, University of California, Merced:
Even though one may ask whether a single storm is caused by or linked to climate change, this is not a question that science can confidently answer (Vice News has an insightful article on this). What can be more confidently stated is that the impacts associated with Tropical Cyclones (notably coastal surge and floods from cyclonic rainfall) are very likely increasing due to anthropogenic climate change.

Hamish Ramsay, Lecturer, Monash University:
The interannual (El Niño) and intraseasonal (Madden-Julian Oscillation) variability present in the South Pacific at the time of Pam likely contributed to its extreme intensity. It is important that we understand the influence of these internal modes on tropical cyclone intensity within the broader context of a long-term warming trend in the Pacific.