Ten scientists analyzed the article and estimated its overall scientific credibility to be ‘very low’. more about the credibility rating
A majority of reviewers tagged the article as: Biased, Cherry picking, Derogatory, Flawed reasoning, Inaccurate. 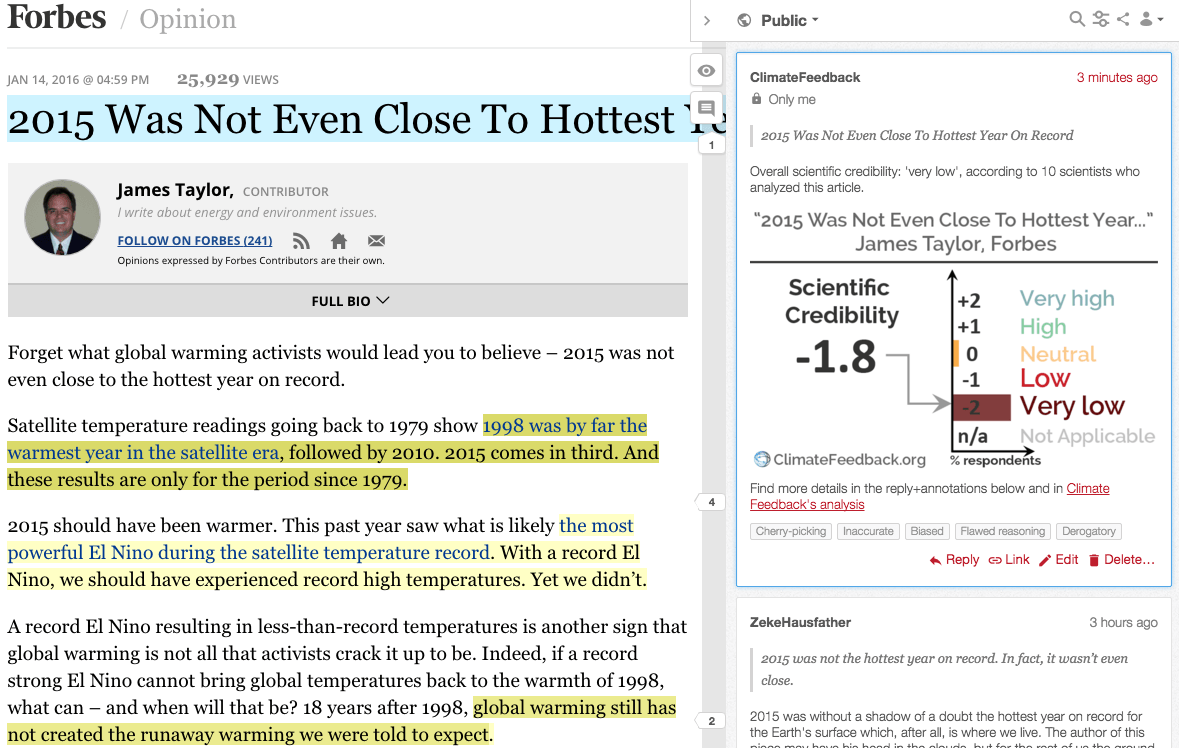 This is an inaccurate and misleading report. It only comments on the temperature in the troposphere (not at the surface of the Earth, where people live) and ignores most of the data available to discuss whether or not Earth’s climate is warming. It is based on a single, unpublished and contested record.

Note that another contributor to Forbes published an accurate article on the subject, however the inaccurate article has been read 15-20 times more (26k) than the accurate one (1.5k) as of Jan 22, 2016.

Carl Mears, Senior Research Scientist, Remote Sensing Systems (RSS):
The author is guilty of ignoring the surface temperature record, which is probably more accurate than the satellite temperature record. The author ignores the fact that record temperatures often occur in the year following an El Nino, because the global temperature response tends to lag the El Nino SST anomaly by 3-4 months. The author engages in excessive derogatory name calling, and appears to lump scientists in with “global warming activists”.

Zeke Hausfather, Research Scientist, Berkeley Earth:
This article makes startlingly inaccurate claims about the earth’s surface and satellite temperature records, as well as attempts to ascertain the earth’s temperatures over the past two millennia through proxy measurements. The author would do well to talk to scientists involved in surface and satellite records and to consult the peer-reviewered scientific literature rather than blogs when writing in the future.

Alexis Berg, Associate Research Scholar, Princeton University:
Very misleading and biased article. The author tries to confuse readers by using the satellite record of the lower atmosphere temperature to disprove the fact that 2015 was the warmest year, when everybody else is in fact referring to the mean temperature at the surface. They are slightly different things. Satellite measurements do not disprove surface measurements. A more interesting question would be to understand the difference between the two. A better-informed – and less biased – author would have addressed that and tried to explain it to their readers.

Julien Emile-Geay, Assistant Professor, University of Southern California:
This is a highly misleading piece by an author with a history of cherry picking. Nothing in this piece is factually accurate. Furthermore, in relying on discredited reports by the Heartland Institute instead of the peer-reviewed literature, the author completely misinterprets the paleoclimate record, which only strengthens the point that 2015 is an exceptionally warm year, not just since 1979 but for the past 10,000 years.

David Easterling, Chief of the Scientific Services Division, NOAA's National Climatic Data Center:
The coverage is a bit disingenuous since it only uses one satellite data set, and emphasizes the troposphere rather than the boundary layer [surface] where people actually live. The surface and upper air are two very different areas and their temperatures differ for lots of scientifically valid reasons.

James Renwick, Professor, Victoria University of Wellington:
This piece is a rehash of several points that have been refuted many times over. The “satellite temperature record” from Roy Spencer is trumpeted so much because it is the only record that shows slow warming.

Eric Guilyardi, CNRS Research Director, Université Pierre et Marie Curie &amp; Professor, University of Reading:
A biased piece that confuses scientists and activists, full of inaccuracies and even plain errors. The author has obviously no expertise in climate science and did not seek to get some to write his piece. Quite poor journalism, if the term even applies.

Stephan Lewandowsky, Professor, University of Bristol:
Nothing in this article is either scientific or novel. Those are stale talking points that are constantly recycled by political operatives in pursuit of an agenda.

Andreas Schmittner, Associate Professor, Oregon State University:
The article contains major scientific inaccuracies by claiming that most of the last 10,000 years and most of the past several thousand years were warmer than today (not true, see Marcott et al. 2013 or PAGES 2K). It omits the surface temperature data from the last 100 years, which show that it was a record warm year. It presents logical flaws by first showing the satellite data of lower tropospheric temperature estimates from 1979 to the present to say that 1998 was warmer than 2015 and then argues that the surface temperature record from the last 100 years was too short to make an argument. What I find most disturbing is that the author paints scientific facts as coming from “activists” and being “doctored”. Clearly an attempt to discredit science.

Below is a list of statements made by James Taylor in his article along with comments and replies made by scientists.

1. The hottest year on record, in terms of annual global average surface temperature, is 2015.

“Forget what global warming activists would lead you to believe—2015 was not even close to the hottest year on record.”

Britta Voss, Postdoctoral Research fellow, U.S. Geological Survey:
This is simply false. 2015 was indeed the hottest year on record. This was rigorously determined by a large group of climate scientists. By calling these scientists “global warming activists,” the author misleadingly implies that the claim is made by a fringe group of non-expert partisans. 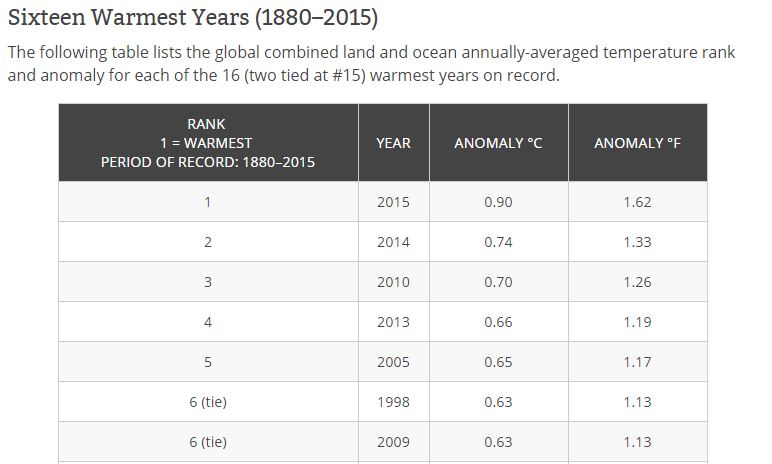 James Renwick, Professor, Victoria University of Wellington:
A wild misrepresentation of reality. Reputable scientists, not activists, compile these records. As for a compliant media, it’s generally the opposite. Many media outlets seem only too pleased to run disinformation pieces like this one, in the name of “balance”.

Zeke Hausfather, Research Scientist, Berkeley Earth:
The irony is that the “undoctored” raw temperature records also show that 2015 was the warmest year ever, and actually show a lot more global warming over the past 150 years: 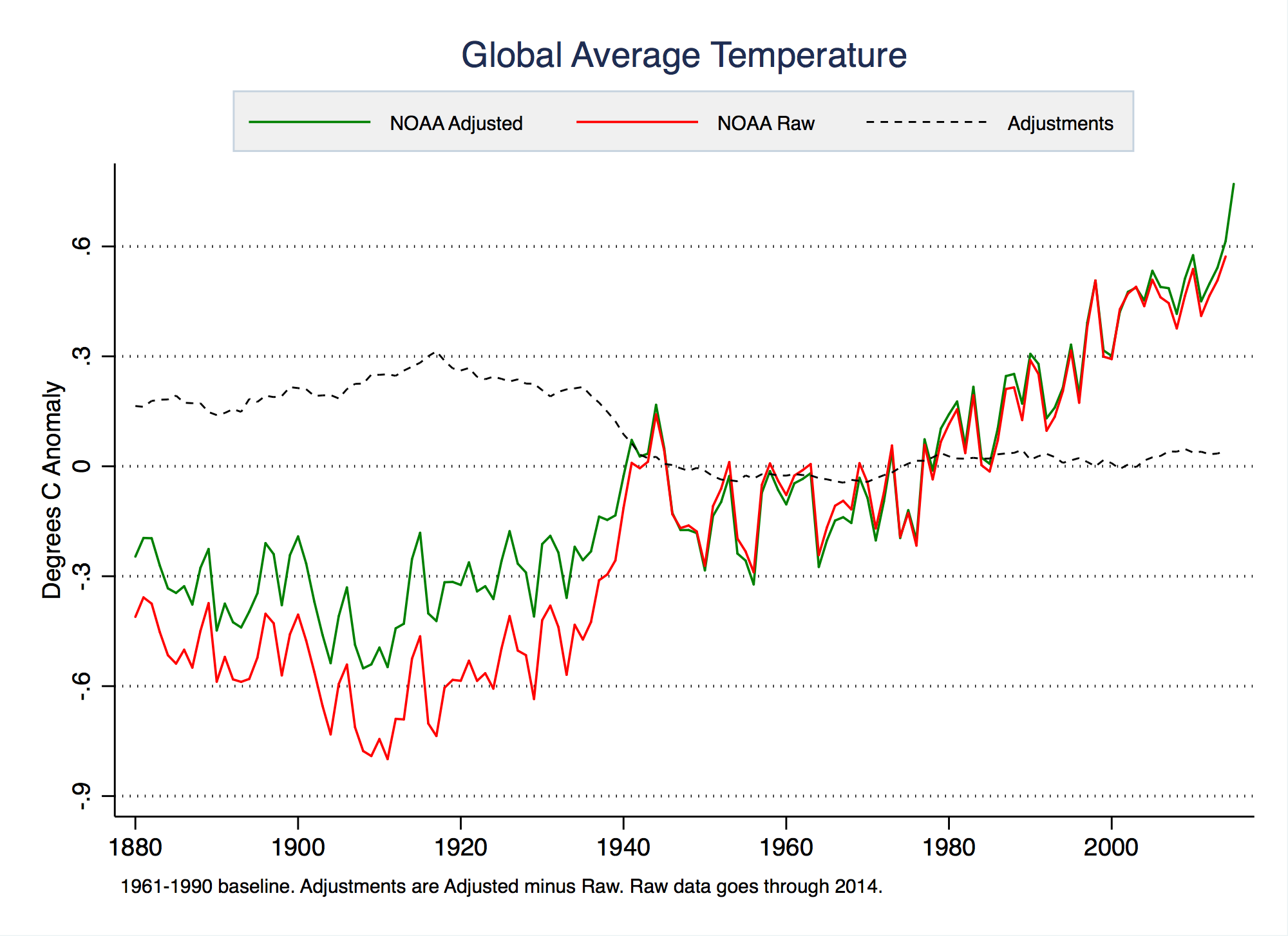 2. Other climatic datasets are consistent with surface temperature data.

James Renwick, Professor, Victoria University of Wellington:
In that particular record, yes. But what does it measure? An estimate of temperature in a layer above the earth’s surface, derived from observations of radiation into space. It is one of the most adjusted and manipulated records out there. And it is about the only one that shows 1998 as the warmest year. Look at thermometer records, ocean temperature, ice melt, atmospheric moisture content, you name it. They all show the same things, that the earth system is warming steadily.

Alexis Berg, Associate Research Scholar, Princeton University:
One wonders here if the author is aware that satellite measurements of the “Lower Atmosphere” (a few km in the atmosphere) do not measure the same thing as surface temperature. So they don’t need to be exactly the same. So in a sense he is comparing apples with oranges here (or mandarines with oranges, if you will).

Zeke Hausfather, Research Scientist, Berkeley Earth:
Satellite records do not measure the surface of the earth, where we live; rather, they measure the temperature of the lower atmosphere. They are also subject to large uncertainties due to the need for corrections of factors like orbital decay and coverage / scan time changes. If you look at the uncertainty range of estimates for satellites, it is much larger than that of surface temperatures and really can’t tell us anything about the correctness of the surface temperature trend. 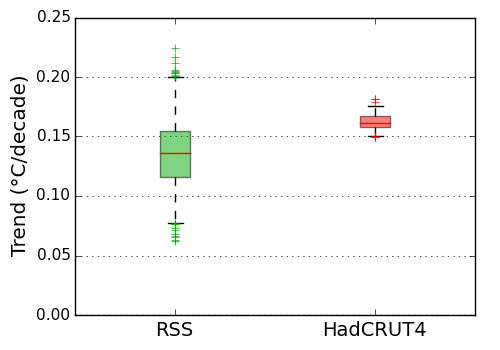 “Satellite temperature measurements show 1998 and 2010 were warmer than 2015. Image courtesy of drroyspencer.com.”

Victor Venema, Scientist, University of Bonn, Germany:
The UAH6.0 dataset has not been published yet and scientists have thus not had the opportunity to check these results. UAH6 used very different methods to estimate the temperatures and having a much smaller recent trend than the previous UAH5 dataset.

An awkward choice to use UAH6.0 to contrast to the well vetted and more reliable trend estimates of the surface temperature by six different groups world wide. A balanced journalist would at least also show these results.

James Renwick, Professor, Victoria University of Wellington:
This is a complete fabrication. The paleoclimate record suggests that the current warmth is unprecedented for at least the last 1400 years. And it is the cause of the current warming (fossil fuel burning) that’s the real story.

Julien Emile-Geay, Assistant Professor, University of Southern California:
How convenient that indicators of temperature are deemed “reliable” to support this fallacy, but unreliable otherwise! The author cannot have it both ways: if the temperature record is reliable prior to the instrumental era (starting in the 1800s), then it is a fortiori reliable afterwards ; and all surface temperature analyses show an extremely strong warming that cannot be explained without man-made forcing, CO2 leading the pack.

The paleoclimate record unequivocally shows that temperature maxima coincide with high concentrations of greenhouse gases in the atmosphere (https://www.ipcc.ch/report/ar5/wg1/ Chap 5), which is also the cause of the present warming.

3. El Niño warmth in the eastern equatorial Pacific Ocean contributed to the record warmth, but more importantly, it occurred on top of the long-term global warming trend.

“With a record El Niño, we should have experienced record high temperatures. Yet we didn’t.”

Eric Guilyardi, CNRS Research Director, Université Pierre et Marie Curie &amp; Professor, University of Reading:
We certainly did experience a record high temperature (as shown by James Renwick above. A 1 degree celsius (or 2 F) El Niño warming increases the global temperature by 0.1 deg C (or 0.2 F). This year’s El Niño has added about 0.3 deg C driving the global temperature up to 1 C (2 F) above the pre-industrial value. As decades go by the El Niño warming becomes relatively smaller and smaller compared to human induced global warming (+50% in the 90s and just +30% now for the same extreme El Niño).

Victor Venema, Scientist, University of Bonn, Germany:
The last record of the satellite tropospheric temperatures in 1998 was in the year after an El Nino. This may well be the case again. Climate predictions on the short-term are difficult, but it is expected that 2016 will again be a record year.

Carl Mears, Senior Research Scientist, Remote Sensing Systems (RSS):
Calendar years with record temperatures tend to occur in the year following the peak of the El Nino event. This was true for the 1997-1998 and 2009-2010 El Ninos in the satellite data. The fact that 2015 was a record year in the surface temperature record probably means that 2016 will even be a bigger record breaker.

“Indeed, if a record strong El Niño cannot bring global temperatures back to the warmth of 1998, what can—and when will that be?”

Zeke Hausfather, Research Scientist, Berkeley Earth:
In the surface temperature record, 5 independent groups all find that 2015 far exceeded the temperature of 1998 and was the warmest year on record by a significant margin: 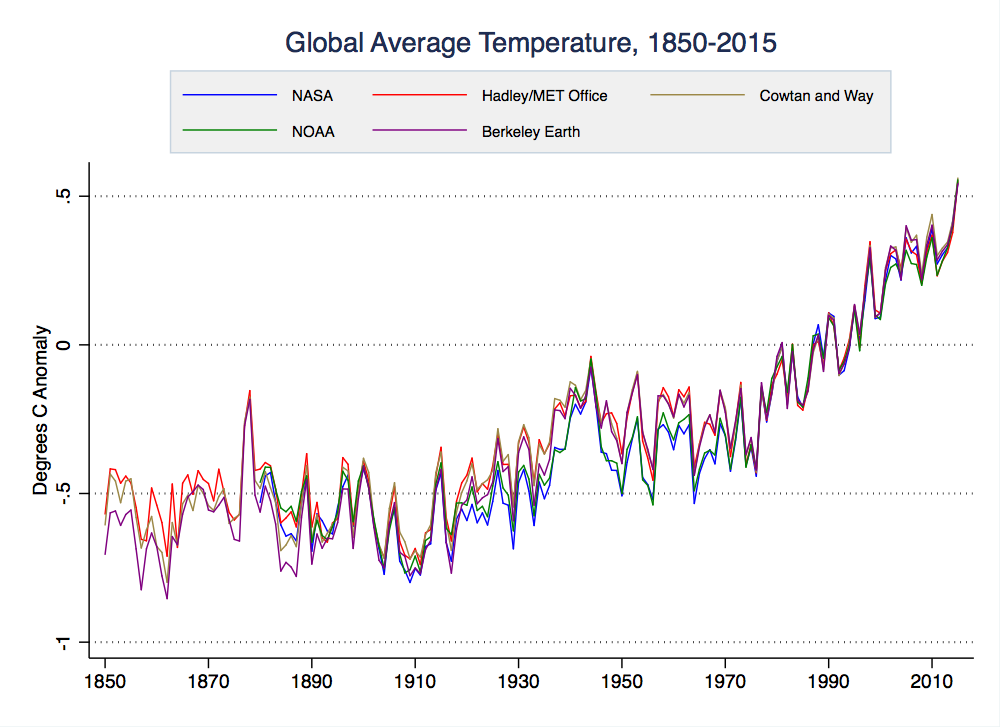