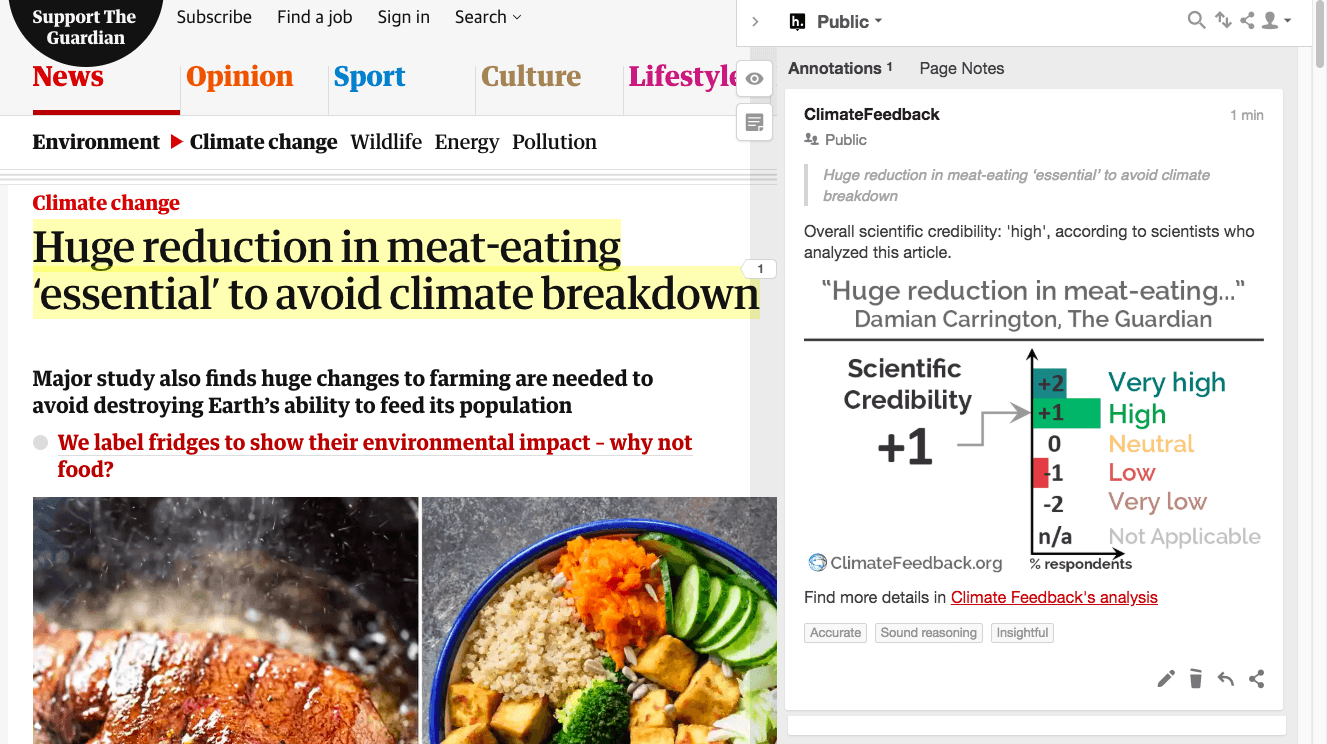 This story in The Guardian covers a newly published study in the journal Nature on the environmental impacts of the food system as global population grows and diets change. The study examines possible changes including reducing the consumption of red meat (which has a large greenhouse gas and water footprint) and reducing the amount of food that spoils before it can be eaten.

The study concludes that “no single measure is enough to keep these effects within all planetary boundaries simultaneously, and that a synergistic combination of measures will be needed to sufficiently mitigate the projected increase in environmental pressures.”

This is similar to the recently released IPCC report on 1.5 °C warming, which states, “Decreasing food loss and waste and behavioural change around diets could lead to effective mitigation and adaptation options (high confidence) by reducing both emissions and pressure on land, with significant co-benefits for food security, human health and sustainable development, but evidence of successful policies to modify dietary choices remains limited.”

The scientists who examined the Guardian article mostly found that it accurately described the study’s conclusions. However, they also found that the headline was sensational and not representative of the study.

This post from October 2018 was updated in January 2019 with additional comments as part of a series of reviews of 2018’s most popular climate stories on social media.

Read The Guardian article. You can also install the Hypothesis browser extension to read the scientists’ annotations in context.

Corné van Dooren, Researcher, The Netherlands Nutrition Centre:
Although the presented facts are clear, the scientists give a personal interpretation of the priorities and needed policies, which are not covered in the source. The data give added value, but are in line with earlier studies.

“Avoid climate breakdown”: Even when meat consumption is reduced, the climate effect will take place. And ‘avoid destroying’ in the subtitle is too strong. The authors state that a combination of measures will be needed to sufficiently mitigate the projected increase in environmental pressures.

Arnold Tukker, Professor, Leiden University:
If I have any critique is that it is old news. It has been shown zillions of times that reducing meat and dairy reduced climate change problems.

Stefan Wirsenius, Associate Professor, Chalmers University of Technology:
The two main headlines in The Guardian article are not supported by the content in the research paper.

First, the statement that “huge reduction in meat-eating is essential to avoid climate breakdown” is not an accurate reflection of the research findings. What the paper does say is that greenhouse gas emissions cannot be mitigated without dietary changes towards more plant-based food.

Second, the statement that “huge changes to farming are needed to avoid destroying Earth’s ability to feed its population” is a total misrepresentation of the research. The so-called “huge” changes analyzed in the paper are mainly mainstream technology improvements, such as raised yields, improved fertilizer efficiency, etc.

Margaret Gill, Professor, University of Aberdeen:
The article is accurately based on the scientific publication but also includes comments from two other scientists who were not involved in the research, which strengthens its credibility. The headline just reports one of the findings though, which while accurate also plays to the alarmist rhetoric of newspaper headlines—otherwise I would have given the higher mark. The geographical distinction between UK and global citizens in the graphic is also commendable.

Hugo Valin, Research Scholar, The International Institute for Applied Systems Analysis:
The article provides a rigorous assessment of the overall threats to the climate and the planet, as we are getting towards the challenge of feeding a 10 billion global population. Change in diets will be required due to the high impacts of the livestock sector, but this is not the only lever to use to relieve the level of pressure, and the Nature study also heavily emphasizes the role of technical change, which is less prominent in the Guardian piece. It should also be reminded that most reductions of emissions on non-CO2 emissions from livestock will be needed in developing countries (75% of ruminant emissions, 56% of monogastrics in 2000, see Herrero et al1). Therefore, reducing consumption in rich countries will only have limited impacts if developing countries do not join the efforts. The “flexitarian” diet is also certainly a more promising way forward than a vegan diet, due to nutrition balance considerations, and cultural barriers towards stopping animal based products consumption.

The alarming tone could gain to be balanced with the diversity of challenges across different geographies, the role that technology could play to alleviate some adverse impacts, and the fact that climate mitigation in agriculture does not operate in isolation with other sector climate policies, which means the climate mitigation burden could be transferred across sectors and geographies to make the 1.5 or 2 degree C targets bearable for the food and agricultural system without jeopardizing food security2.

Harry Aiking, Associate Professor, Vrije Universiteit Amsterdam:
The underlying Nature paper by Springmann et al is clearly a landmark paper. Its contents have been captured in an admirable way by this article in The Guardian. The health issue is underplayed in the latter, however, and does not appear until the very last line. Just eating according to dietary guidelines—thus avoiding obesity and associated diseases—is about as important as adopting a flexitarian diet to both health and sustainability. We urgently need to reduce 1) over-consumption of protein and 2) over-consumption of calories. In addition, 3) reducing food waste, and 4) replacing animal protein with plant protein are also important. For arguments in full, see Aiking and De Boer (2019)*.

Martin Heller, Research Specialist, University of Michigan:
The information in the article appears to reflect well the finding of the study covered, and does an excellent job of putting the scientific findings in a “common” context. The findings and their take home message are easily understood.