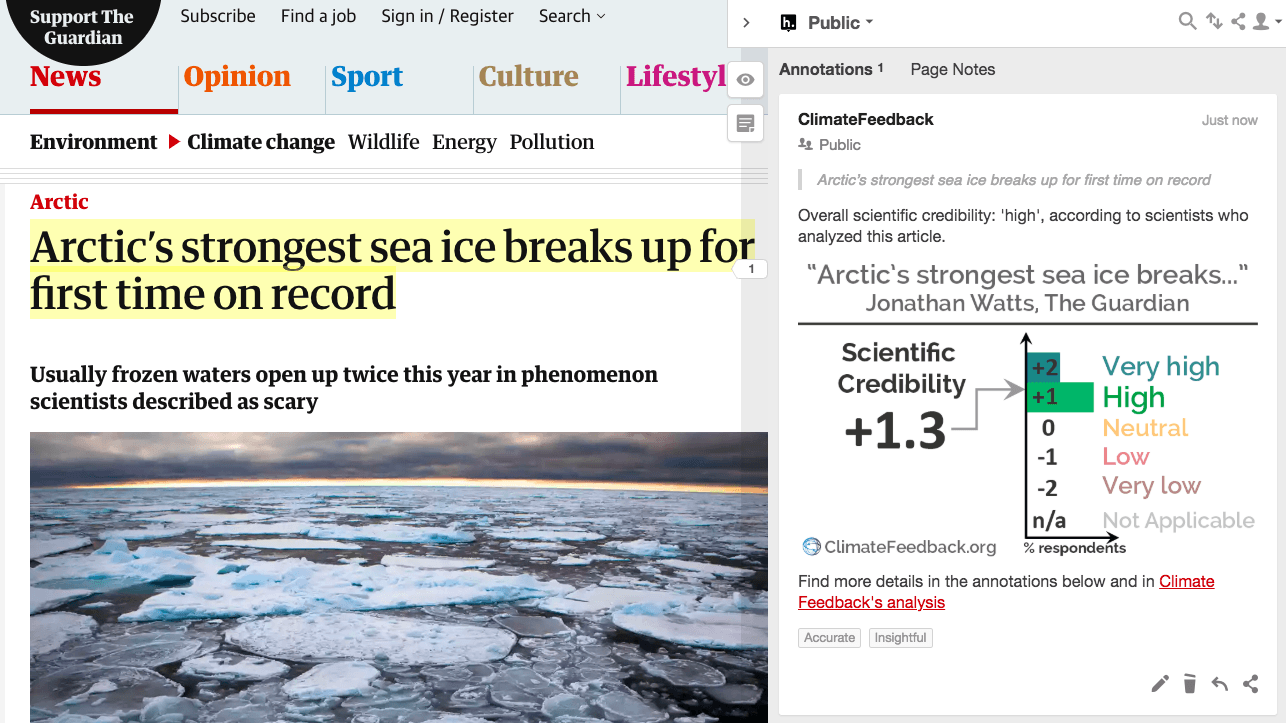 This article in The Guardian describes unusual Arctic sea ice conditions north of Greenland, where an area normally covered by old and thick ice expected to be the last to melt due to global warming has broken up this year.

Scientist who reviewed the article found that this event was accurately discussed, but the end of the article makes questionable connections between Arctic conditions and heatwaves and fires in Europe and Siberia, as well as the Gulf Stream circulation of the Atlantic Ocean. While the relationship between Arctic sea ice conditions and midlatitude weather patterns like heatwaves is a topic of current research that is still unclear. Atlantic Ocean circulation, however, is not believed to be connected to lingering weather systems, as the article states.

Robert Graham, Postdoc, Norwegian Polar Institute:
The article is clear and accurate. The authors have consulted several experts in the field to develop this story. They provide a scientifically sound overview of the current sea ice state north of Greenland, its historical context, and what has caused this anomaly.

The reason for not providing a +2 rating relates to the second last paragraph, and statements regarding the Gulf Stream: “This includes the Gulf Stream, which is at its weakest level in 1,600 years due to melting Greenland ice and ocean warming. With lower circulation of water and air, weather systems tend to linger longer.”

It is fair to say the Gulf Stream is weakening/at its weakest in 1600 years1. However, there is no clear link between changes in the Gulf Stream and Polar Vortex or the current Arctic sea ice state. No reference is provided in the article to support such a link.

Finally, the expression “dormant hot front” is unfamiliar/unclear in the final paragraph. I think it would be better to say slower moving weather systems.

Michel Tsamados, Lecturer (Assistant Professor), University College London:
Clear article highlighting a rare regional event symptomatic of thinner more mobile sea ice. It would have been nice to give some general background on how rare this event really is. Keld Qvistgaard cites earlier evidence of such event but we are not told how frequent these have been while others (i.e., Gavin Schmidt from NASA) have likened this event to the type of condition present in this region in the early Holocene (6,000 to 8,500 years ago).

Angelika Renner, Researcher, Institute of Marine Research, Tromsø, Norway:
The article accurately describes the observed sea ice breakup north of Greenland, with decent background information both on the “normal” state of the sea ice in this region and on what has happened now. While the general concerns by scientists regarding this opening are conveyed in a decent way, the last paragraphs of the article linking this sea ice anomaly to a weakening Gulf Stream and forest fires in Scandinavia are not well supported.

“The sea off the north coast of Greenland is normally so frozen that it was referred to, until recently, as ‘the last ice area’ because it was assumed that this would be the final northern holdout against the melting effects of a hotter planet. But abnormal temperature spikes in February and earlier this month have left it vulnerable to winds, which have pushed the ice further away from the coast than at any time since satellite records began in the 1970s.”

Julienne Stroeve, Senior Research Scientist, University College London:
I find this story to be a bit off. For one, we had open water develop here during February. It was likely unprecedented then, though I haven’t been able to verify this yet as I don’t have high resolution data far back in time. I do have plans to investigate this more. Anyway, since open water developed in February, this implies new ice formation, which would have been substantially thinner than the ice that had been there. Thus, having the opening happen again this summer is tied to the February event, so it is somewhat expected that it would happen again in summer. Temperatures have not been all that warm this summer in the Arctic, but if
the winds are right you can push this thinner ice away from the shore.

Jennifer Francis, Research Professor I, Department of Marine and Coastal Sciences, Rutgers University:
This statement is consistent with our many lines of evidence that sea ice has been steadily thinning. The thickest ice types have become increasingly rare. Thinner ice is more easily pushed around by the winds, so it is no surprise that the right wind patterns could move it farther offshore.

“During the sunless winter, a heatwave raised concerns that the polar vortex may be eroding. This includes the Gulf Stream, which is at its weakest level in 1,600 years due to melting Greenland ice and ocean warming. With lower circulation of water and air, weather systems tend to linger longer.”

Julienne Stroeve, Senior Research Scientist, University College London:
Certainly breakdown of the polar vortex allows for cold air to spill out of the Arctic (which is part of why the UK was so cold last winter). Several studies are strongly suggesting that the loss of winter ice in the Barents Sea is the driver for a weaker polar vortex, though this remains debated in the science community.

Jennifer Francis, Research Professor I, Department of Marine and Coastal Sciences, Rutgers University:
This statement seems to mix up some hypothesized connections among observed changes. The polar vortex did experience a disruption this past winter and likely contributed to heat waves near the North Pole, but the connection to the Gulf Stream is unclear. Increased melting of the undersides of Greenland’s outflow glaciers is fueled by warmer oceans, but there is no evidence suggesting that additional melt is causing weather systems to linger longer. Enhanced Arctic warming is believed to be causing more persistent weather patterns under certain conditions, however.