Six scientists analyzed the article and estimated its overall scientific credibility to be 'neutral' to ‘high’. more about the credibility rating
A majority of reviewers tagged the article as: Accurate, Imprecise/Unclear, Unbiased. 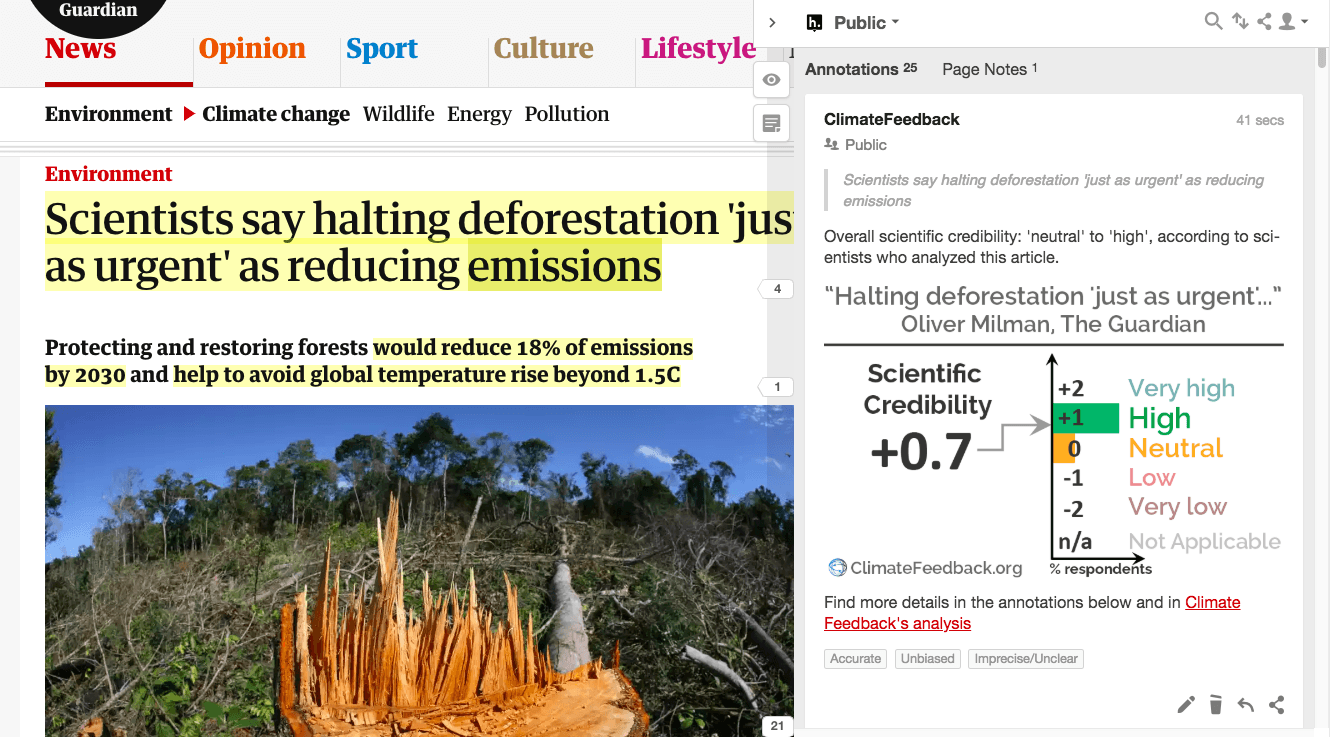 This story in The Guardian covers a statement released by a group of scientists to highlight several ways in which forests are important to climate change—both because deforestation releases carbon dioxide into the atmosphere and because regrowing and managing forests can help us remove carbon dioxide from the atmosphere.

Scientists who reviewed this story found that it accurately reported the statement but note a few places where more clarity could be provided—avoiding the misleading phrase “runaway climate change”, for example. Reviewers also expressed a desire for links to supporting information, most notably the scientists’ statement itself.

Ben Poulter, Research Scientist, NASA:
The article correctly links estimates of current carbon dioxide emissions from land use and land cover change with fairly conservative estimates for potential carbon sequestration embedded in “natural climate solutions” as part of the climate mitigation strategy to avoid 1.5°C warming. The article highlights an independent statement (published in advance of the IPCC 1.5 degree report) raising awareness of how Bioenergy with Carbon Capture and Sequestration (BECCS) activities proposed to drawdown atmospheric carbon dioxide pose negative consequences for unmanaged forests by replacing them with oil crops. The potential trade-offs of BECCS on ecosystem services provided by forests, on food security, water resources, and their effectiveness as a climate mitigation strategy are not well understood, but the risks are included in the Summary for Policymakers (SR15 SPM Final of the IPCC 1.5 degree report) published Oct 8, 2018.

Land-use and land-cover change is responsible for roughly 10-15% of total global carbon dioxide emissions. Forest management, reforestation, and afforestation where appropriate, is part of the climate mitigation portfolio assessed by Integrated Assessment Models used in the IPCC process. Trade-offs between the ecosystem services forests provide and BECCS, which requires large land area conversion to oil seed crops are limiting the scope of this strategy, and focusing attention on mitigating carbon dioxide from fossil fuel sources directly.

Julia Nabel, Scientific Programmer, Max Planck Institute for Meteorology:
The article mainly summarises a statement of 40 scientists titled “Five Reasons the Earth’s Climate Depends on Forests”. Unfortunately it does not provide the link to the original statement which is quite short and easy to read.

Stephen Po-Chedley, Postdoctoral Research Fellow, Lawrence Livermore National Laboratory:
This article was a good summary of a statement on the importance of forests in combating climate change (signed by 40 scientists). I thought this article was fine (minus the “runaway climate change” statement). I didn’t think it was substantially more clear than the original statement.

Ana Bastos, Scientific Researcher, Ludwig-Maximilians University of Munich:
The article largely reflects the statement of the group of scientists—which in itself is accurate and referenced. However, the journalist could have made a bigger effort to direct readers to the appropriate references (a link to the original statement would have already been very helpful). Moreover, the statement reflects a perspective of a group on the relevance of forests in the context of climate change mitigation. Even though I share this perspective, a journalist should have set this statement in the context of other studies / perspectives about mitigation options.

Alexis Berg, Associate Research Scholar, Princeton University:
This article does a decent job at reporting on a recent statement by some scientists, based on the latest peer-reviewed science, emphasizing the importance of forest protection and restoration as a tool to combat climate change, as the IPCC is releasing a report regarding the current trajectory of global warming and mitigation strategies. A bit more clarity would have been welcome in the article about some points in the statement, for instance regarding the importance of large-scale “bioenergy with carbon capture and storage” technology that needs to be deployed for low-climate change scenarios and the danger this approach, somewhat paradoxically, poses to the world’s forests.

The original statement says: halting fossil fuel use, which is different than reducing emissions since e.g. deforestation also leads to emissions.

Protecting and restoring forests would reduce 18% of emissions by 2030

The original statement says: could provide 18%[v] of cost-effective mitigation through 2030.

The original statement sounds much less optimistic, it states: …in order to have a chance of limiting warming to 1.5°C, we cannot emit more than about 750 billion tons … forests store enough carbon to release over 3 trillion tons … if destroyed. And further: Achieving the 1.5°C goal also requires massive forest restoration

Razing the world’s forests would release more than 3 trillion tons of carbon dioxide, more than the amount locked in identified global reserves of oil, coal and gas.

This was Reason 1 in the original statement.

“Runaway climate change” is too strong here. The original statement says: These “natural climate solutions” could provide 18%[v] of cost-effective mitigation through 2030, which is in reference to avoiding 2°C of climate change.

This information relates to reason 2 in the original statement.

I agree, “runaway climate change” is too strong here. It has a precise definition. Warming beyond 2°C, say by 3 or 4°C, is bad, but not the same as “runaway” (which, in my view at least, means that warming would then take a dynamics of its own, stop responding to any emission changes and slip up to several more degrees….).

Going quickly through the authors I identified 7 countries: Brasil, US, France, Austria, Italy, Canada, United Kingdom (the list might not be complete).

It is expected the report will focus on required changes to the energy system, rather than forests.

This appears to be the motivation for the authors’ statement. I don’t know if it is true that the role of forests will be under-appreciated (in the to-be-released IPCC report)—it would have been useful to get more perspective on this—but it is certainly reasonable to highlight the importance of forests.

“In responding to the IPCC report, our message as scientists is simple:

This might give the impression that the authors of this statement are separated from the IPCC community. It’s more complicated than that: some of the authors here are also IPCC contributors. They may have felt, however, that not enough emphasis was placed in the latest IPCC discussions and report on the role of forest protection and restoration as a mitigation option to climate change. So it’s more a matter of nuances than opposition.

“We almost take forests as a given but we lose forest every year, which means we are diminishing them as a carbon sink.

Deforestation does happen every year, but on the whole, the latest research suggests that we are currently (over the last 30 years) slightly gaining forests globally (+7% compared to early 80’s), as forest gains outside of the Tropics, in particular in the Northern Hemisphere, are a bit greater than tropical deforestation*.

We could certainly limit deforestation to gain even more forests, though. In addition, from a carbon perspective and local climate regulation, tropical forests are probably more important than mid-/high-latitude forests.

bioenergy with carbon capture and storage (Beccs), is untested

So this seems to suggest that half of tropical forests are supposed to be cleared to make room for large-scale BECCS in scenarios where global warming is limited to 1.5C (or even 2C).

This seems like it could have been described more clearly than in passing, in that quote.

“It’s horrifying that we’d lose our biodiversity to avert climate change. Losing tropical forests is not somehow cheaper than putting up wind farms in the US or Sahara.”

Indeed. But it’s not clear that the report will make (makes) such suggestion. The trade-offs between the different options are mentioned in Chapter 2—but agree that not as highlighted as they probably should.

Lawrence said a steep drop in emissions to zero by 2040 would negate the need for “negative emissions” technology that would damage forests’ ability to suck up carbon, maintain local water supplies and weather patterns and provide a home for a riot of birds, mammals, insects and other creatures.

It would have been good to add references for this statement.

Absent further commitments, the Paris pledges are not consistent with a 1.5°C warming target—more like 3°C.