Five scientists analyzed the article and estimated its overall scientific credibility to be ‘high’ to ‘very high’. more about the credibility rating
A majority of reviewers tagged the article as: Accurate, Sound reasoning, Unbiased. 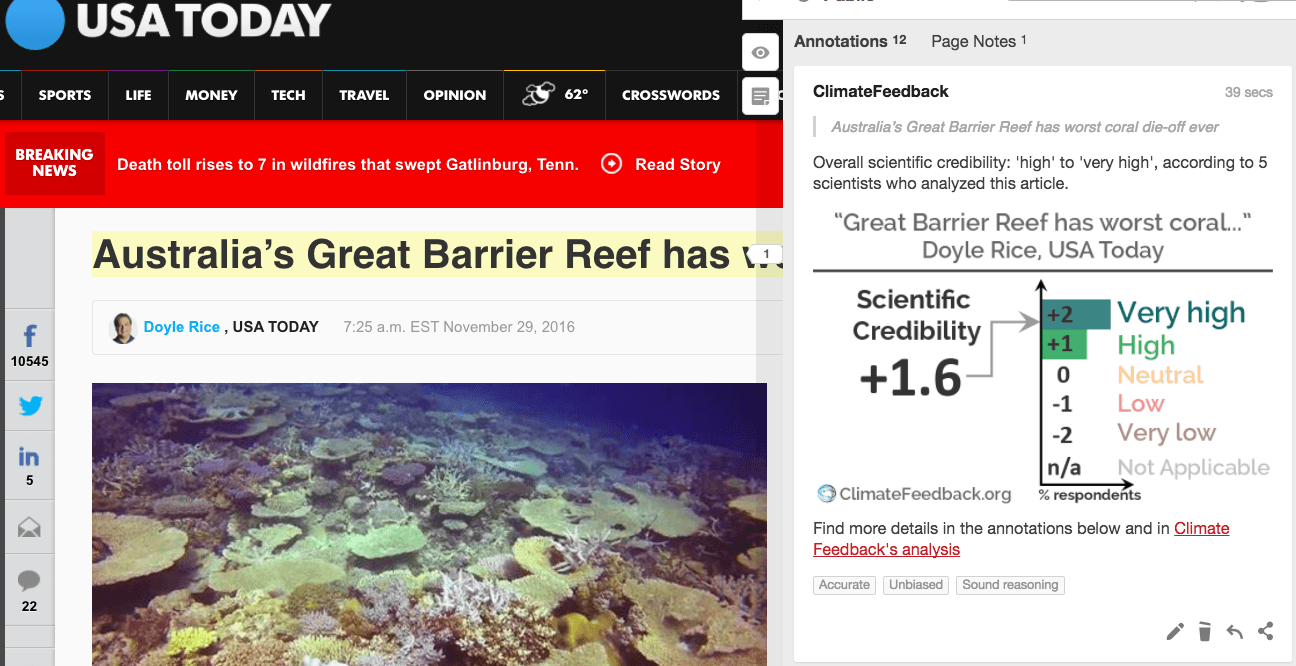 This article in USA Today reports on the latest survey of mass coral bleaching on the Great Barrier Reef released by the Australian Research Council Centre of Excellence for Coral Reef Studies. This year, the northern portion of the reef has seen the worst bleaching ever observed with two-thirds of coral dead on average—even more in some locations. Southern sections of the reef experienced much less bleaching and death because of slightly cooler water.

The article correctly notes that climate change is making this kind of mass bleaching event more frequent, putting tropical reefs at risk. Reefs are ecosystems incredibly rich in biodiversity, and they provide economic value through tourism, fishing, and protection against coastal erosion.

Mark Eakin, Scientist, Coordinator of NOAA’s Coral Reef Watch, National Oceanic and Atmospheric Administration:
In general, the article got this one almost completely right, with one of my two quibbles being in one of the experts’ quotes. It is unfortunate, however, that the article didn’t put this story in the context of the global coral bleaching event that is still underway—currently hitting hardest in Micronesia and the Marshall Islands.

Katrin Meissner, Professor, University of New South Wales:
This article is mostly accurate. The author made one overstatement (that we will see yearly massive bleaching events at the Great Barrier Reef within the next decade). It should be noted, though, that the frequency of massive bleaching events is increasing, will continue to increase in the near future, and that these events do not need to occur annually to kill the reef. The variability of El Niño Southern Oscillation on top of the background warming trend of surface temperatures means that we will exceed the bleaching thresholds more frequently. In the future, the reefs won’t have time to recover between these events.

James Renwick, Professor, Victoria University of Wellington:
This is a very good article highlighting one of the world’s biodiversity hotspots and the grave risks it faces. One of two of the comments and ideas are off the mark, but it is largely factually correct.

Lauren Simkins, Assistant Professor, University of Virginia:
Coral bleaching is a visual reminder of the influence of climate change on the world’s oceans and ecosystems. The article presents findings that support a massive bleaching event this year and some of the ecological and economic consequences of coral bleaching. Although lacking in key scientific references to support claims, the article is insightful and unbiased.

John Bruno, Professor, The University of North Carolina at Chapel Hill:
I concur with my colleagues that this is mostly an accurate article. A few points are exaggerated, as we all noted in the annotated version. And to be clear, this may well be the worse die off on the Great Barrier Reef, but we’ve been seeing die offs of this magnitude and geographic scope around the world for decades.

For example, coral reefs across the Caribbean experienced a die off of similar-to-larger scope 35 years ago. My entire career, I’ve been studying “post mass-coral die off” reefs in Jamaica, Belize, Cuba, etc. So in this regard, the event isn’t especially notable. The real lesson of the GBR coral mortality of 2016 isn’t that ocean warming is causing mass-coral die offs – we’ve known that for a quarter century. It is that even the world’s most remote, well-managed, and otherwise pristine reefs are susceptible.

Many of my colleagues have assumed and argued that ocean warming only causes mass coral mortality in the presence of other insults to the reef. Stressors like overfishing, pollution, tourism, etc. that were believed to weaken “natural resilience” to ocean warming. I co-authored a paper earlier this year* that found that reef isolation had no effect on coral loss – the world’s most isolated reefs, free from local human impacts, were just as degraded in terms of the amount of remaining living coral as reefs adjacent to large population centers. The bottom line is that no form of local management can save reefs from carbon emissions.

The statements quoted below are from Doyle Rice; comments and replies are from the reviewers.

1. This year, the northern section of Australia’s Great Barrier Reef experienced the worst bleaching of corals ever observed. (Corals “bleach” when water temperatures increase beyond a tolerable range.)

“Scientists confirm a mass bleaching event on the Great Barrier Reef this year has killed more corals than ever before, with more than two thirds destroyed across large swathes of the biodiverse site.”

Mark Eakin, Scientist, Coordinator of NOAA’s Coral Reef Watch, National Oceanic and Atmospheric Administration:
Actually, this is an underestimate as the “25% of the worst affected reefs (the top quartile), losses of corals ranged from 83-99%.”

“When water temperatures become too high, coral becomes stressed and expels the algae, which leave the coral a bleached white color.”

“The good news, scientists said, was that central and southern sections of the reef fared far better, with “only” 6% and 1% of the coral dead, respectively.”

Mark Eakin, Scientist, Coordinator of NOAA’s Coral Reef Watch, National Oceanic and Atmospheric Administration:
Roughly speaking, the El Niño may have added a quarter of a degree C to the global average in 2015/16, while the greenhouse-gas-related warming trend has added twice that much to the average values since the 1980s.
It’s also important to note that this is only one part of a global coral bleaching event that has been occurring since mid-2014.

“Mass coral bleaching is a new phenomenon and was never observed before the 1980s as global warming ramped up.”

Julia Cole, Professor, The University of Arizona:
On the Great Barrier Reef, I believe this is true. Global (especially tropical) temperatures took a jump upwards in the late 1970s, providing the extra warmth that puts corals in danger.

“[…]looking to the future, mass coral bleaching on the Great Barrier Reef will likely be an annual phenomenon within a decade, Torda said.”

Mark Eakin, Scientist, Coordinator of NOAA’s Coral Reef Watch, National Oceanic and Atmospheric Administration:
This may turn out to be true but most studies place annual bleaching, especially on the Great Barrier Reef, a bit further out—perhaps 2050.

Katrin Meissner, Professor, University of New South Wales:
This sentence is an overstatement. See, for example, Meissner et al. (2012)*: “By year 2030, 66–85% of the reef locations considered in this study would experience severe bleaching events at least once every 10 years. Regardless of the concentration pathway, virtually every reef considered in this study (>97%) would experience severe thermal stress by year 2050.” Having said that, mass coral bleaching events do not need to be an annual phenomenon to kill the reef. Coral reefs need years to recover from extreme bleaching events, which means that even a decadal occurrence of severe bleaching will not give the reef enough time to ever recover. While this sentence is an overstatement, the impact on the reef is the same.