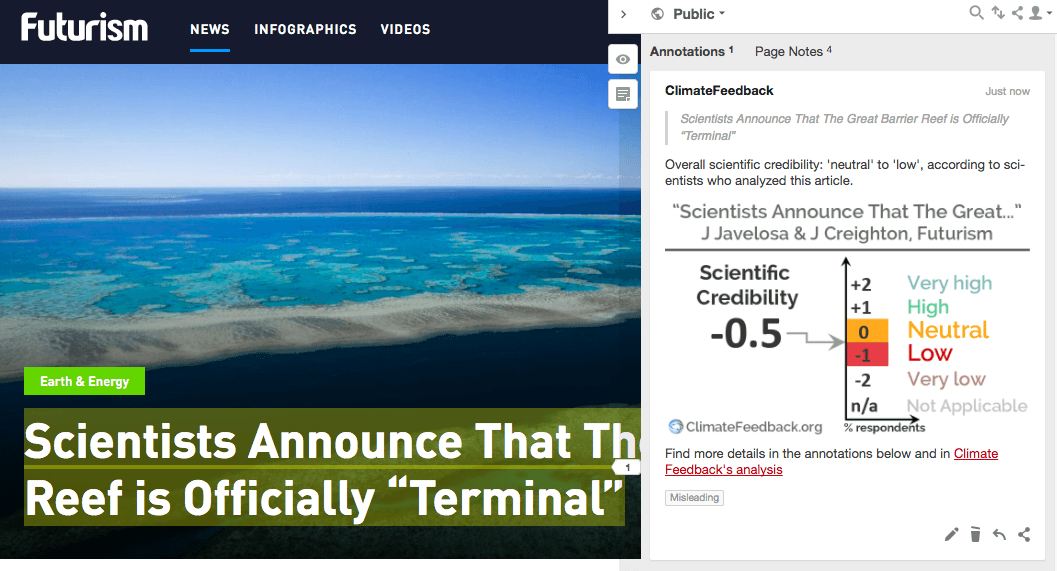 Scientists who reviewed the article found that most of the information is accurate (except for a couple generalizations), but the headline is not supported by the story. The headline seems to indicate that scientists were quoted as saying the the Great Barrier Reef “is ‘terminal’”, but no source used that word.

These comments are the overall opinion of scientists on the article, they are substantiated by their knowledge in the field and by the content of the analysis in the annotations on the article.
Terry Hughes, Professor, ARC Centre of Excellence for Coral Reef Studies, James Cook University:
The content is almost all correct, but the attention-grabbing headline is wrong and isn’t supported by the quotes from two scientists or by the rest of the content.

Simon Donner, Associate Professor, The University of British Columbia:
The short article accurately captures the scientific evidence that repeat mass bleaching events will threaten the Great Barrier Reef, and the message of the ARC official statement. In doing so, however, it is forced into some generalizations including i) describing the Great Barrier Reef as a single entity that can “die” (rather than a complex web of ecosystems that will experience widespread degradation) and ii) stating there have been only four instances of mass bleaching (there have been thousands of events across the world over the past three decades, yet only four years where bleaching occurred in all ocean basins).

Mark Eakin, Scientist, Coordinator of NOAA’s Coral Reef Watch, National Oceanic and Atmospheric Administration:
Much of the story is factually correct. However, the declaration of the reef as “terminal” in the title is a very bad start. What could have been a good story is dragged down by the use of terms like “terminal” without attribution, confuses no time for recovery between back-to-back events with no hope for recovery in the future, and uses a quote saying an expert has “given up” from the perspective of insufficient government action on water quality without providing context for how this relates to a story that is focused on global warming and bleaching.

Unfortunately, the facts and quotes don’t support the title.