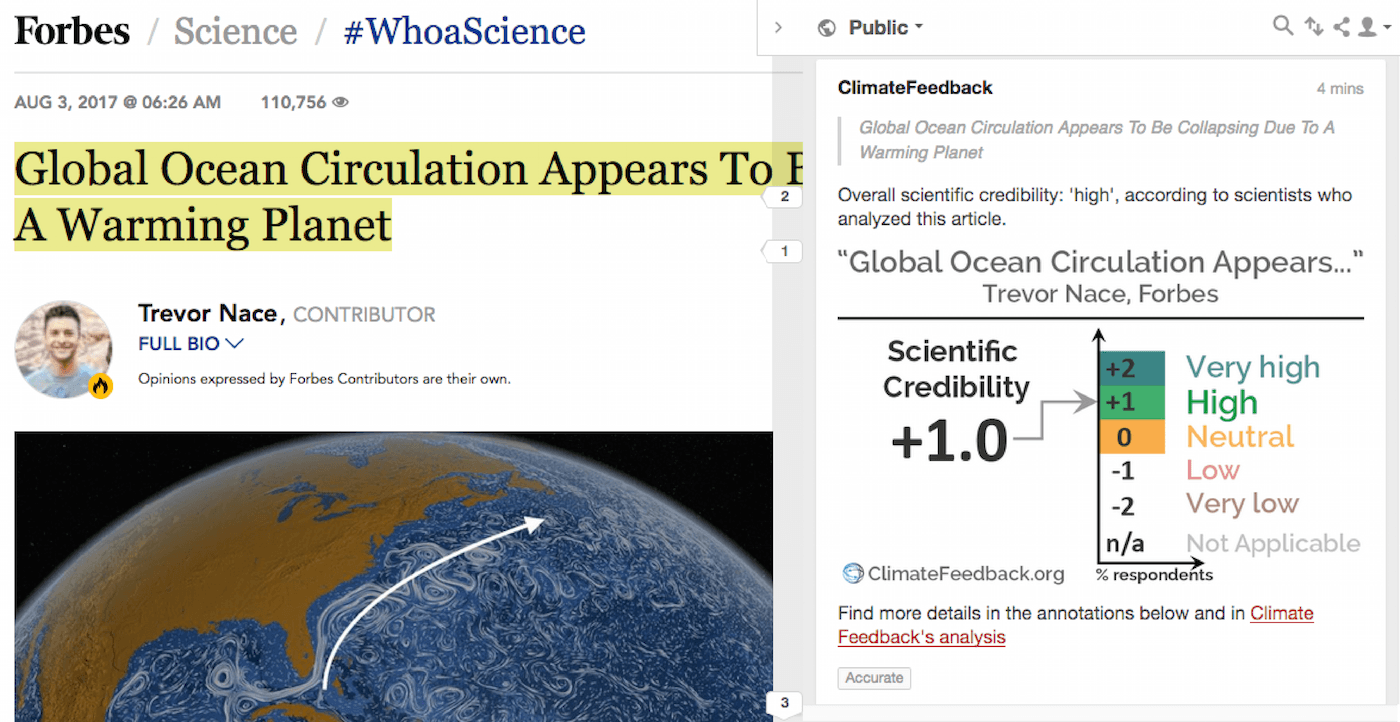 This article at Forbes describes a study on the possible influence of Arctic sea ice loss on recent changes to a key portion of ocean circulation in the Atlantic Ocean. This Atlantic Meridional Overturning Circulation (AMOC) transports heat around the North Atlantic, but could be slowing down as a result of climate change, with consequences for regional temperatures in Europe and eastern North America.

Scientists who reviewed the article found that it accurately summarized research on the topic of the AMOC. However, the headline used stronger wording than the article, stating that “global ocean circulation appears to be collapsing due to a warming planet”. That is misleading, as this research is analyzing a weakening of the circulation pattern, but not something as extreme as a “collapse”.

See all the scientists’ annotations in context
If the link does not work due to Forbes’ landing page, add Hypothesis to your browser and switch it on when the article page has loaded.

Stefan Rahmstorf, Professor, Potsdam University:
I find the article is a very accurate summary of the state of science, with the exception of the word “collapsing” in the headline (which may well have been not the author’s choice). Changing this word to “weakening” would have left me with nothing to complain about.

Dan Jones, Physical Oceanographer, British Antarctic Survey:
This is an accurate, concise summary of the slowdown of the AMOC and its possible future states. There are a couple of minor issues—specifically, one of the links goes to an irrelevant article, and it would be useful to have a couple more citations to the scientific literature. The title is possibly a little overstated—I might instead say that the AMOC is at risk of collapsing in a warming world.

Alek Petty, Postdoctoral associate, NASA Goddard Space Flight Center:
I think the article did a pretty good job of summarizing the main findings of this paper (and other recent studies on this theme), while adding some appropriate disclaimers.

The main issue I had was with the headline. The weakening of the Atlantic Meridional Overturning Circulation isn’t exactly a collapse of the global ocean circulation, and the author makes a point of the high uncertainty that remains regarding the significance of this result towards the end of the story.

Dan Jones, Physical Oceanographer, British Antarctic Survey:
I’m a little hesitant about the title. The slowdown of the Atlantic Meridional Overturning Circulation is not the same thing as the “collapse of global ocean circulation”. It might be more accurate to say that the AMOC is at risk of collapsing in a warming world.

Also, it’s worth noting that although we understand that there is a connection between AMOC and the amount of carbon dioxide in the atmosphere, the mechanisms involved in this connection are still under investigation.

“Evidence is growing that the comparatively cold zone within the Northern Atlantic could be due to a slowdown of this global ocean water circulation.”

“While geologists have studied events in the past similar to what appears to be happening today, scientists are largely unsure of what lies ahead.”

Stefan Rahmstorf, Professor, Potsdam University:
A very brief but correct reference to two issues: 1) We know the AMOC has collapsed several times in the past 100,000 years in the so-called Heinrich events, and 2) we cannot predict its future response to greenhouse warming very well because it is a highly non-linear system.

“Scientists have long known about the anomalous ‘warming hole‘ in the North Atlantic Ocean, an area immune to warming of Earth’s oceans.”