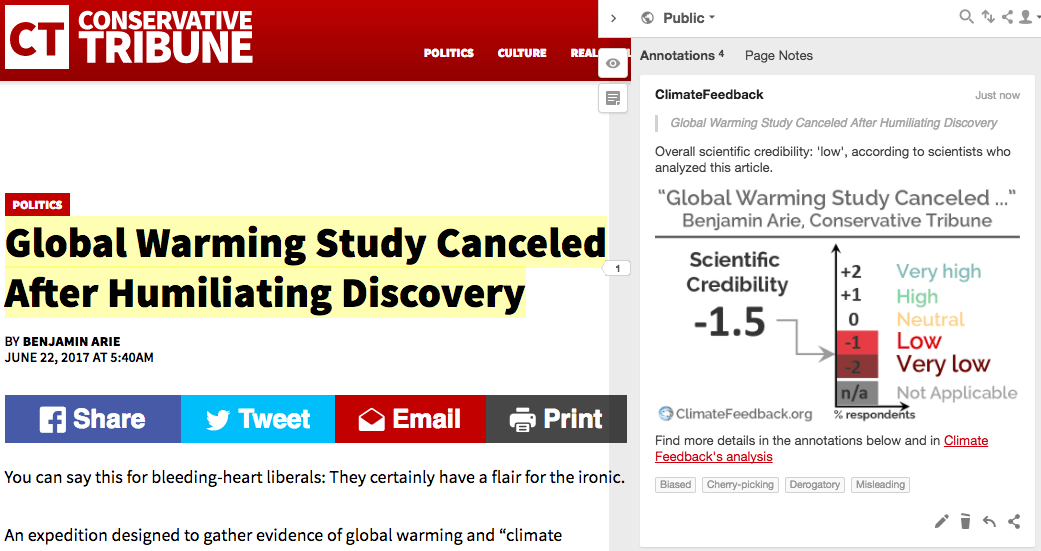 In June 2017, an Arctic research cruise had to be postponed because of unusually thick sea ice that had drifted near Newfoundland. Polar field work frequently battles difficult conditions, but several outlets wrote derisive articles (analyzed by Climate Feedback at the time) based on the assumption that such conditions would no longer exist if climate change were really occurring.

Scientists who reviewed a post on this topic at Conservative Tribune explained that a number of incorrect assumptions underlie its argument against the validity of climate science. Climate scientists have never predicted that these sea ice conditions will not occur. In fact, the drifting of thick sea ice as far south as Newfoundland could be related to the thinning and loss of sea ice nearer the pole.

Twila Moon, Research Scientist, University of Colorado, Boulder:
There is no understanding in this article of the difference between weather (day-to-day or year-to-year variability) and climate (long-term, multi-decade behavior). The author takes advantage of this confusion, and even adds to it, drawing false implications about the scientific method and scientists’ skill.

Nathanael Melia, Postdoctoral research fellow, University of Reading:
There is no science in this article, just some factual statements about an event linked to an agenda driven narrative. The reason un-navigable multi-year ice was found at these locations is because a reduced ice-pack in general allows the multi-year ice to drift from locations where it is historically kept anchored to. June is halfway between the sea ice max and min so these conditions are unsurprising. Polar expeditions are routinely hampered by the seasonal and weekly weather events, it’s part of the reason an ice-breaker was planned to be used in the first place.

Kelly McCusker, Research Associate, Rhodium Group and Climate Impact Lab:
Repeating a version of a debunked argument against climate change science, this biased and misleading political article states that the cancellation of an Arctic research cruise due to increased sea ice at one time and in one region proves climate scientists don’t know anything about climate change over 100 years, which is patently false. The article misrepresents many aspects of our current understanding and is written in a biased manner, using phrases such as “climate change activists [sic] scientists” and “bleeding-heart liberals”.

“Scientists were caught off guard when the true ice conditions were different from their predictions, which took place only months ago…”

Kelly McCusker, Research Associate, Rhodium Group and Climate Impact Lab:
The linked article is not about predictions made for Arctic sea ice.

“[…] yet they absolutely know how the climate will behave over the next 100 years.”

Kelly McCusker, Research Associate, Rhodium Group and Climate Impact Lab:
This is a common and misleading argument that has been dispelled many times. Climate projections don’t presume to predict exactly what will be happening and where at any given time, but instead describe the average climate (or the statistics of weather). A decrease in Arctic sea ice extent overall is a well-known feature of climate change, but within that, variability in regional ice concentrations is expected.