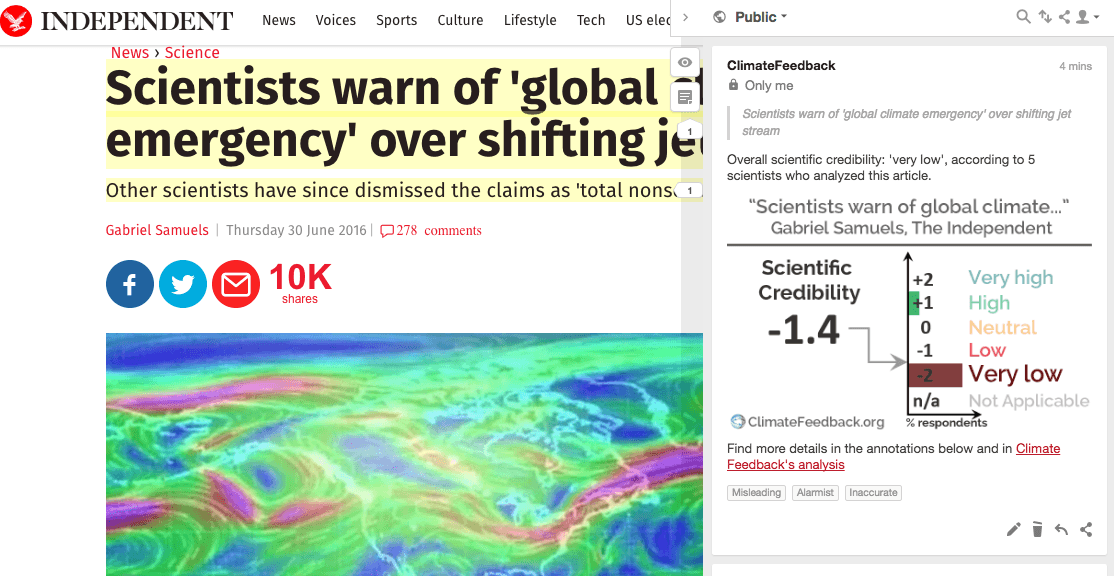 The article repeats claims made by two bloggers that upper-level winds crossing the equator would be an unprecedented consequence of climate change. In reality, such wind features are frequently observed and the central claim of the article is thus unsupported by science.

Note: The Independent has updated the article on July 1st, by:

Unfortunately the original inaccurate article has been shared 10k times on social media while the correction has only been shared 150 times (as of July 5th 2016).

Edwin Gerber, Associate Professor, New York University:
This article makes little sense. It uses scientific jargon, such as in the last paragraph, to make it sound “scientific”, but uses it so loosely that it has no meaning. I do not see any logic behind these wild claims, there are no connections with established research, and there is no discussion of statistical certainty. Moreover, wild attributions to anthropogenic climate change are made without any backing.
Winds routinely cross the equator in the monsoonal circulations. This happens every year, without any grave consequences for climate.

Tim Woollings, Lecturer, University of Oxford:
The article seems to truthfully repeat the bloggers claims, but with no attempt to verify these claims from other sources. Unfortunately the claims are ridiculous.

This snapshot is clearly just a weather pattern, rather than any long-term change. To put things in context, we do expect the jet streams to move in response to climate change, but only by a couple of degrees of latitude over the coming century.

Emmanuel Vincent, Research Scientist, University of California, Merced:
This article reports on speculations made by bloggers without any appropriate fact-checking. Had the journalist contacted actual scientists, it would have been easy for him to understand that the claims are without any scientific substance. One can only wonder whether this lack of fact-checking is intentional to create a click-bait headline and generate buzz on social media.

Jennifer Francis, Research Professor I, Department of Marine and Coastal Sciences, Rutgers University:
It is true that there are often (but not always) two jet streams in each hemisphere. The hypothesis related to Arctic warming causing weaker zonal winds of the jet refers to the POLAR jet. This flow is driven primarily by the temperature difference between the Arctic and middle-latitudes.

The features headlined in this story, however, are a product of the SUB-TROPICAL jet, which is driven mainly by temperature differences between the tropics and middle-latitudes. The upper-level tropical atmosphere is also warming faster than most other places, which is increasing the temperature difference and thus contributing to a STRONGER sub-tropical jet [and not a weaker, wavier jet as this article suggests].

Clifford Mass, Professor of Atmospheric Sciences, University of Washington:
This is total nonsense. Flow often crosses the equator. The cross-equator flow identified by Scribbler and Beckwith is not between mid-latitude jet streams, as claimed. The analysis is making mistakes that even one of my junior undergrads would not make. [this comment was originally published in a rebuttal to the bloggers’ claims in The Washington Post]

Ken Caldeira, Senior Scientist, Carnegie Institution for Science:
This is an odd story because the subhead and the second quotes dismiss the central claim as being “total nonsense”. So, the story seems more-or-less accurate: “A couple of people make a strong claim that is likely to prove false and a bunch of other people denounce the claim as total nonsense”. The question therefore is not so much the accuracy of the story, but of the editorial decision to publicize something that was likely to prove total nonsense.

Further, the story reports on a blog post. I do not see any reference to any peer-reviewed paper. So again, the question is why is The Independent giving so much play to what appears to be an erroneous blog post?
I do not see this piece so much as a failure of reporting as a failure of proper editorial control.