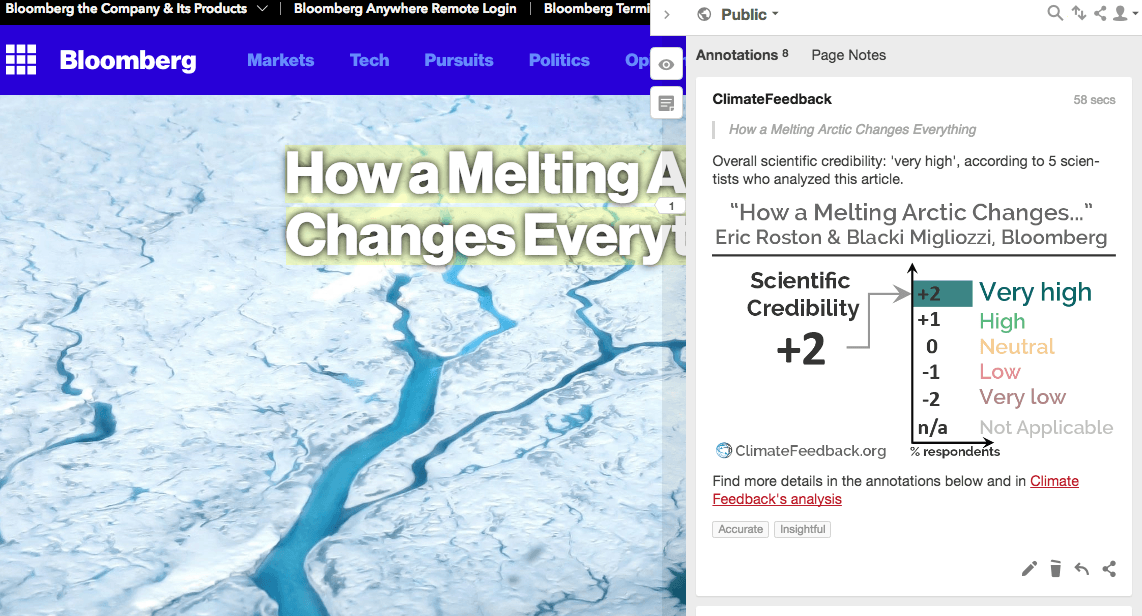 This Bloomberg article gives a brief overview of ways in which the Arctic is changing as it warms, including the loss of sea ice and the thawing of permafrost. Scientists who reviewed the article found that it accurately described these changes, and illustrated them using appropriate datasets. However, several confident statements could be qualified with additional context to provide a clearer picture.

Michel Tsamados, Lecturer (Assistant Professor), University College London:
The quality of the figures along with the accuracy of the text make this a very good summary of the current state of the cryosphere in the Arctic region.

Jennifer Francis, Research Professor I, Department of Marine and Coastal Sciences, Rutgers University:
Changes in the Arctic are breath-taking and extremely worrisome. This article does an excellent job of summarizing some of the most conspicuous ones in language understandable by public audiences.

So while the extent and area of sea ice might be at a lowest point, it remains to be seen if this will materialize in a similar level for the volume of ice.

Having said that, the temperature and ice coverage anomalies of the 2016/2017 Fall/Winter have been remarkable and have further triggered scientists’ curiosity.

“Sea ice has diminished much faster than scientists and climate models anticipated.”

Caution must be exercised when making such statements, and in particular how they should be interpreted.

It is a fact that the observed linear trend in summer Arctic sea ice extent is more negative than the average of all the models having participated to the third and fifth phase of the Coupled Model Inter-comparison Project (CMIP3/5).

It is also a fact that individual model realizations, and in fact a non-negligible number of them, have more negative trends than observed: this is the case for 17 out of 66 (~26%) in the CMIP5 ensemble (figure below). From there, we can’t robustly exclude that the observed and simulated trends are statistically different from each other. 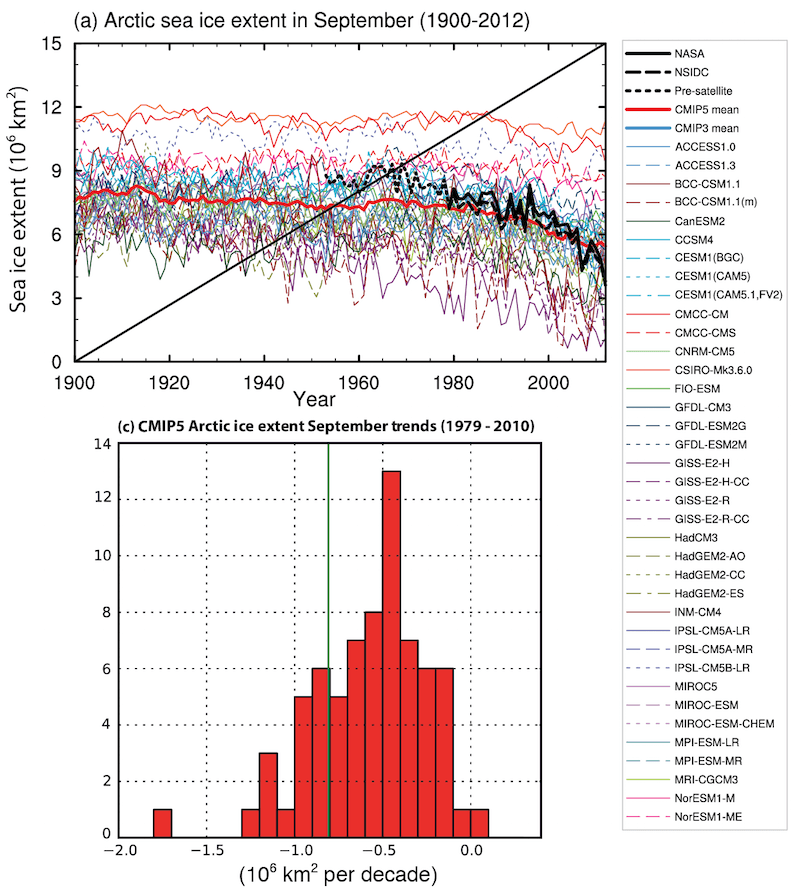 Figure – (a) Time series of sea ice extent for the Arctic in September, as modelled in CMIP5 (colored lines) and observations-based (NASA and NSIDC). Each model is represented with a single simulation. (c) CMIP5 sea ice extent trend distributions over the period 1979–2010 for the Arctic in September. Altogether 66 realizations are shown from 26 different models (historical simulations extended after 2005 with RCP4.5 projections). They are compared against the observations-based estimates of the trends (green and blue vertical lines). Source: adapted from IPCC AR5 WG1, Chapter 9, Fig. 9.24

Let’s make a thought experiment and rewind nature back to 1979. Then let’s clap our hands, creating an infinitesimal disturbance in the atmosphere. Due to the chaotic nature of the atmosphere, this disturbance will cause nature to follow a different path from the one we have known. The trend in sea ice extent will also be different, and potentially very different from the one we have observed, according to model simulations*.

What to understand from this? While these random effects of internal variability can be averaged out by running multiple times the same models, or different models, the same can’t be done for the (one) observation we have. We have to acknowledge that the difference between the (one) observed trend and the average simulated trend can, in part, be explained by internal variability that, by definition, historical climate model simulations are not supposed to anticipate. Hence, the statement that sea ice extent has shrunk faster than anticipated has to be taken with care.

Jennifer Francis, Research Professor I, Department of Marine and Coastal Sciences, Rutgers University:
The main take-home message is that sea ice is disappearing very fast and we know why. It’s a clear response to the fact that carbon dioxide concentrations in the atmosphere are now higher than have been in at least 2 million years, mainly due to burning fossil fuels. The sea ice is a critical component of the Earth’s climate system, and losing over half of it in less than a human generation is already having repercussions well beyond the Arctic.

“Arctic land stores about twice as much carbon as the atmosphere. While growing seasons—which are now either longer or newly possible, depending on the exact location—suck in carbon dioxide during the spring and summer, scientists believe the thawing lands are now emitting more carbon than they take in.”

Jeff Chanton, Professor, Florida State University:
Yes, and in addition they will increase the methane that they emit, which may offset carbon that might be taken up if that is the case.

“Perhaps the most visually dramatic change in the landscape has been occurring in Russia. Warming temperatures have accelerated the rate of natural underground methane leaks. The gas builds up in the soil, forming mounds called ‘pingoes.’ When the pressure becomes too great, the ground explodes, leaving 30 to 40-meter-wide craters.” [picture]

Carolyn Ruppel, Research Geophysicist, United States Geological Survey:
In the review paper* that we published early this year, we said only this:
“In recent years the discovery of deep, rapidly developed Yamal Peninsula craters that emit CH4 [methane] has been attributed by some to thawing gas hydrates, although recent analyses of high-resolution satellite imagery implies pingo collapse as a more likely cause”.

Normal pingoes are widespread even on the Alaskan North Slope, and they are generally believed to be ice-cored. The “alternative” pingoes that have been in the news recently and that the Bloomberg article alludes to would not have ice at their cores, according to that interpretation. Many workers have measured high methane concentrations in and near these craters on the Yamal Peninsula, but I have no way of knowing whether (a) methane is genetically related to the craters’ evolution or (b) the craters evolve first by still-not-understood processes and the crater then has access to methane that is already in the surrounding/underlying soils or produced by microbes acting on buried organic carbon (so the methane leaking into the crater is what causes high concentrations within). I also can’t say whether the phenomenon of crater formation is widespread enough and whether these craters are releasing enough methane to the atmosphere for these features to have an appreciable impact on high-latitude methane releases.