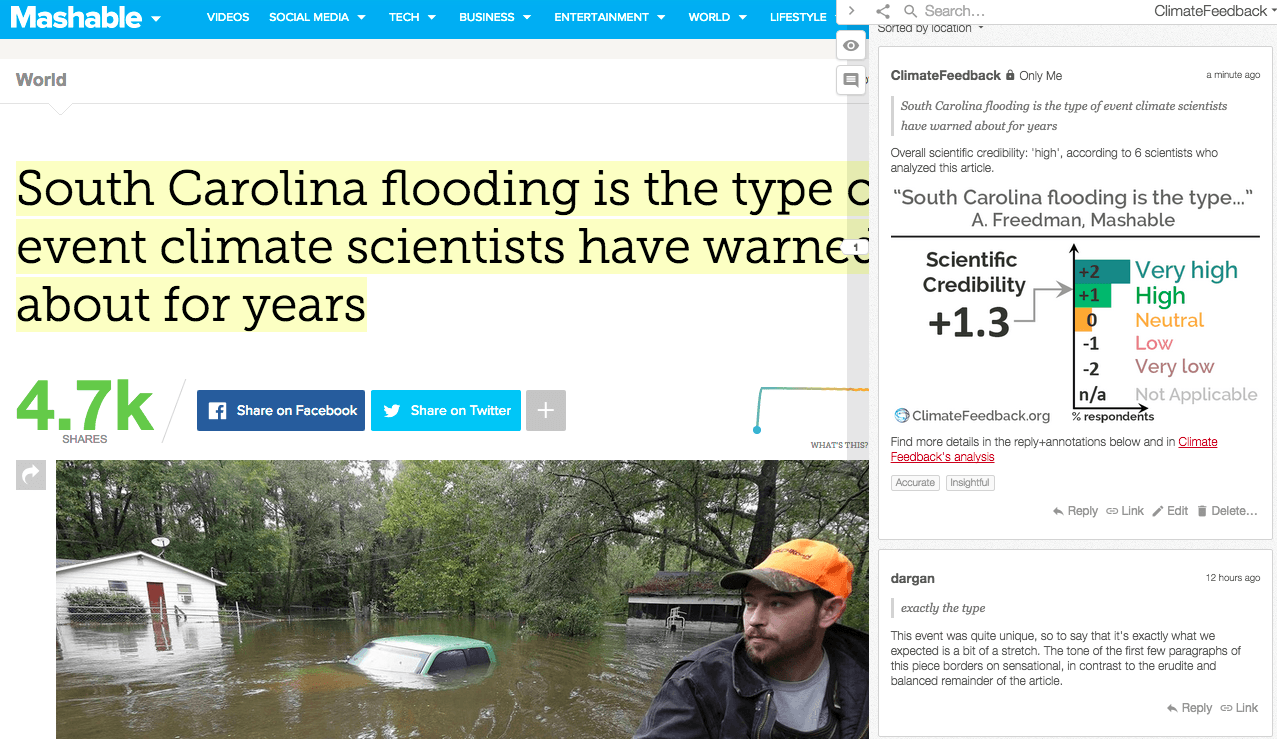 This Mashable article does a good job at describing the relationship between the flooding in South Carolina and climate change. Long-term trends show an increase in the frequency of heavy downpours in the US, and this increase is consistent with the consequences of climate change. There is still debate, however, over attributing specific extreme rain events to climate change. Some scientists argue that by increasing the amount of moisture in the atmosphere, global warming has an impact on all extreme rain events. Not all scientists agree with this conclusion, however, and Andrew Freedman makes this clear in his article.

I believe the article addresses our current understanding of the science and is a balanced response.
The article discussed the unique juxtaposition of an upper-level low and hurricane that was the direct cause of the event, but also directly addresses the role of the increase in atmospheric water vapor available for enhancing rainfall. The article also discusses the potential role of high latitude blocking highs (such as occurred with Hurricane Sandy), but, appropriately, does not dwell on that as a leading mechanism. I also appreciate the different perspectives on attribution studies and how they might apply to this situation.

Dargan Frierson, Associate Professor, University of Washington:
Water vapor content has increased in a warmer climate, and this is leading to more extreme rainfall events around the world. It’s tricky to evaluate the contribution of climate change to a particular weather event, but generally speaking, the author provides an accurate summary of the challenges of this research, and the range of scientific thinking about it.

Victor Venema, Scientist, University of Bonn, Germany:
This is a complicated topic and the author honestly describes many caveats. Still the reader may get the impression that the changes in precipitation are larger than they most likely are.

Jim Kossin, Research Scientist, NOAA's Center for Weather and Climate:
The statements and quotes are defensible but also vague and quite broad in how one thing may be related to another. Consequently, the article does not provide much scientific insight. The lack of specificity in “connecting the dots” leads to a somewhat unsubstantial message.

Alexis Berg, Associate Research Scholar, Princeton University:
In my view this article presents a well-documented and balanced view of what can, or cannot, be said currently about extreme precipitation events and global warming in general, and about this recent event in South Carolina in particular. I appreciate the author’s effort to get the input of several climate scientists on the latter.

Ilissa Ocko, Climate Scientist, Environmental Defense Fund:
Comprehensive overview of the state of the science, including discussion of areas we know well and areas that are still being actively researched.