(CANDIDATE 80) - Scientists estimate that this presidential candidate’s understanding of climate change is “very low”. more about the credibility rating 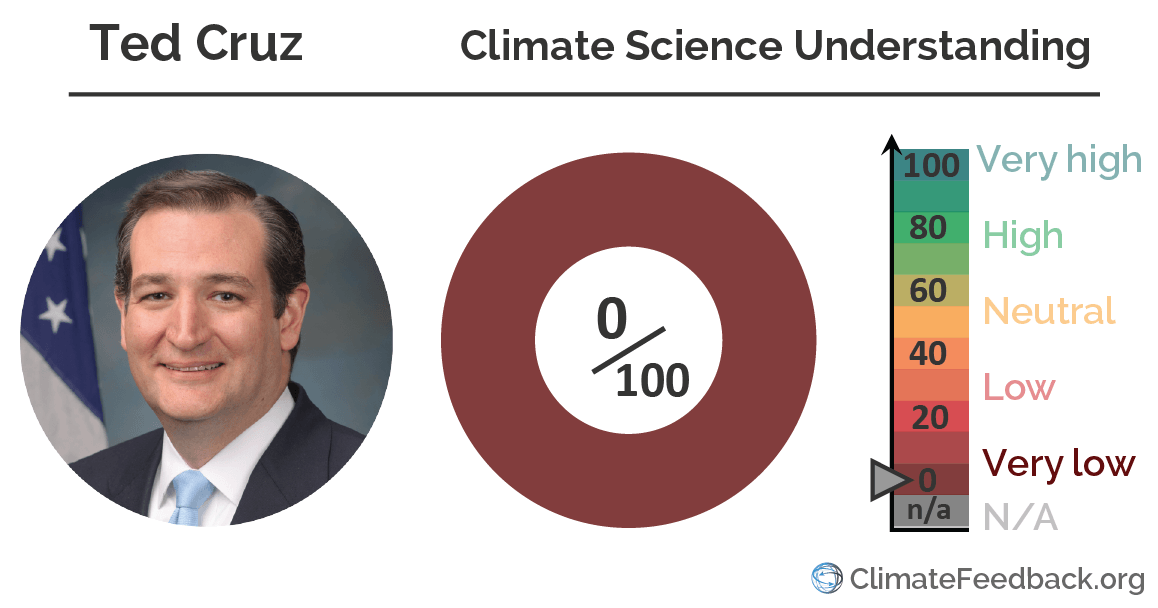 Rasmus Benestad: The irony is that the candidate cites remote-sensing data from satellite to discredit anthropogenic global warming. The satellites do not measure temperature directly, but light/radiation emitted from the earth’s atmosphere. Then models are used to calculate the temperatures, and these models are based on similar physical principles as the climate models predicting that increased greenhouse gases lead to a global warming (but set in reverse). The candidate is altogether wrong about ‘adjusting the numbers’ and about data and facts.

David Battisti: This candidate shows a profound ignorance of the observational records, the climate science — and indeed of the scientific method.

Ryan Sriver: Complete ignorance on the subject. No attempt to even address the issue.

Kevin Trenberth: His facts are wrong and selective.

Michael Mann: This individual understands less about science (and climate change) than the average kindergartner. That sort of ignorance would be dangerous in a door man let alone a president.

The average of the scientists’ ratings is 0 with a 99% confidence interval level of 0-0* ‘Very low’. We estimate that this rating is extremely robust given that all scientists independently converged on a ‘Very low’ estimation.

Below is a list of statements made by Ted Cruz along with comments and replies made by scientists.

If you look at satellite data for the last 18 years, there’s been zero recorded warming. The satellite says it ain’t happening.

This is a misleading statement. The candidate is referring to a mismatch in the mid-tropospheric temperature trends estimated from satellite irradience measurements and that measure directly from radiosondes. Much (but not all) of this mismatched was resolved when an error was discovered in the way the satellite measurements were processed (see the report by the US National Academy of Sciences in 2000). That the global average surface temperature has increased since 1900 is not in question.

Scientists estimate the trend due to climate change from observations that also contain changes due to the way the temperature was measured.

Stations are relocated, early thermometers were not as well protected against the sun.

For the observations of the sea surface temperature measurements it is important to know that in the past they were often made by taking a bucket of water out of the sea, nowadays the water inlet of ships is often used and the last decade buoys have become important. The bucket measurements are too cold because water evaporates during the measurement, which cools the water.

The net effect of all adjustments on the global mean temperature is a *reduction* of the warming.

[See the figure below illustrating the effect of the adjustment] 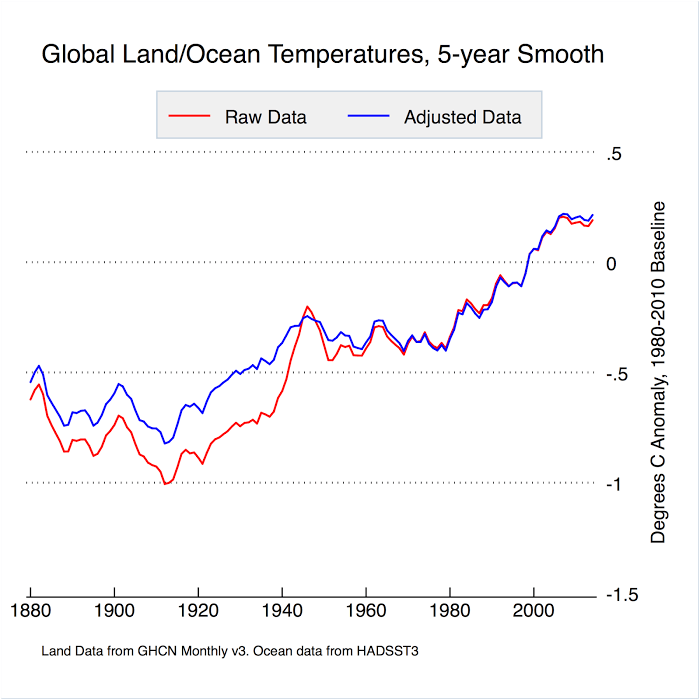 Climate change, as they have defined it, can never be disproved

This is false. Heating of the atmosphere via greenhouse gases is a well-understood phenomena based on basic physics and chemistry. It is well-defined and certainly open to disproving. Unfortunately, the wealth of evidence from research suggests this will not happen.

The last 15 years, there has been no recorded warming. Contrary to all the theories that they are expounding, there should have been warming over the last 15 years. It hasn’t happened

That the temperature increase is not uniform in time is expected because of natural variability. And although some decades have experience positive and negative trends, over the past 120 years there has been an inexorable increase in global average temperature.

This is inaccurate. The rate of surface warming might have been lower over the past 15 years, but the warming trend is still present (see figure 1 below). More importantly, the ocean (where most of the additional heat is stored) keeps getting warmer (see figure 2 below). 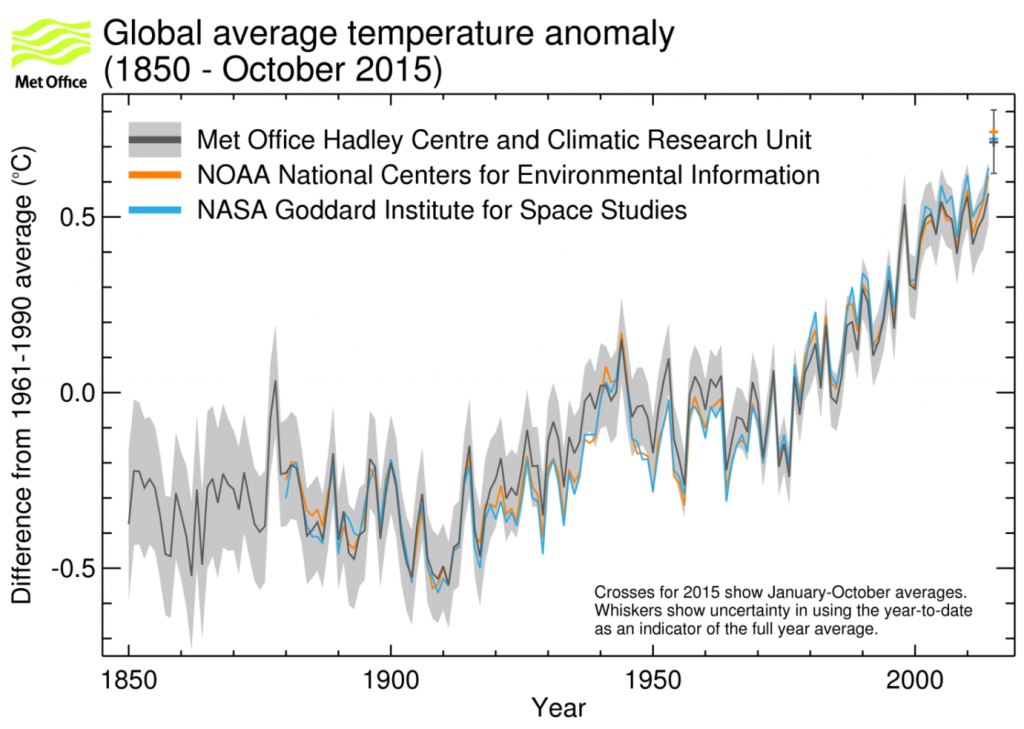 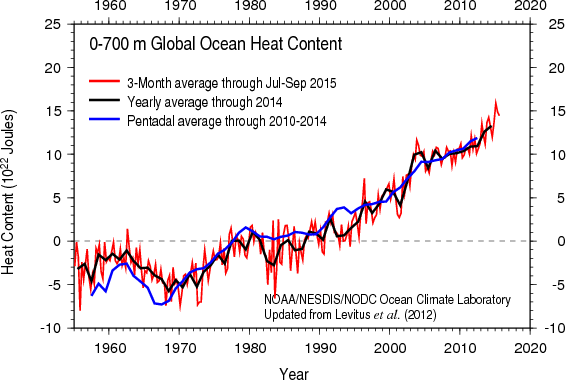 Figure 2: Ocean heat content down to a depth of 700m. Source: NOAA NCEI

You know, back in the ’70s — I remember the ’70s, we were told there was global cooling. And everyone was told global cooling was a really big problem. And then that faded.

The candidate appears to be confused. In the 1970s, some in the climate community were studying the impact of changes in the Earth orbits [around] the Sun on the Earth’s climate. These changes occur slowly — playing out on time scales of 20,000, 43,000 and 100,000 years.

scientists four decades ago were studying “global cooling, a global ice age was coming,” and they were as wrong as those who now say the earth is warming.

The satellite data the candidate trusted for the last trend of the last 18 years show warming of the full period of measurement. Seems inconsistent.

Climate science is most certainly a science and based on establish scientific principles of observation, math, chemistry, physics, and other basic sciences. The idea that climate science is a religion is, frankly, offensive.