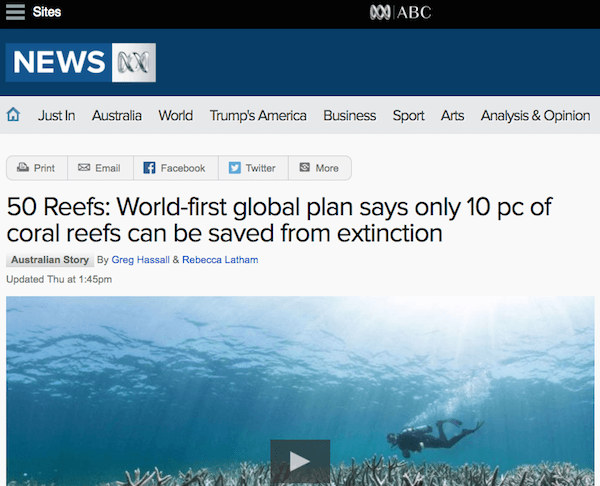 CLAIM
90 per cent of the world's coral reefs will disappear in the next 35 years due to coral bleaching induced by global warming, pollution and over-development.
VERDICT more about the rating framework

About half of the coral that were alive in preindustrial times have already been lost, and most corals living on reefs today are likely to be unsustainable by the end of this century.

FULL CLAIM: Scientists estimate 90 per cent of the world's coral reefs will disappear in the next 35 years due to coral bleaching induced by global warming, pollution and over-development.

Katrin Meissner, Professor, University of New South Wales:
This is a fair statement, based on several peer-reviewed studies. For example, Meissner et al. (2012)* conclude that: “Regardless of the [greenhouse gas] concentration pathway” (RCP 3PD, RCP 4.5, and RCP 8.5), “virtually every reef considered in this study (>97%) would experience severe thermal stress by year 2050.”

This paper considered a range of future concentration pathways from the most aggressive “business as usual” to the most optimistic (RCP 3PD, which peaks at 440 ppm), and calculated the probability of reoccurring severe bleaching events at the locations of major coral reefs worldwide. The analysis was based on future projections simulated with a climate model and superimposed natural climate variability (El Niño Southern Oscillation). “Severe thermal stress” means that a coral reef does not have enough time to recover between two severe bleaching events. Furthermore, a high percentage of reefs will also be stressed by ocean acidification by 2050 (see figure below).

When we also add local pollution, increased nutrient and sediment loading, and over-development as stress factors, we can conclude that ABC’s statement is likely an underestimation.

Ken Caldeira, Senior Scientist, Carnegie Institution for Science:
We have made projections* indicating that, if current CO2 emission trends continue, no coral reefs will be sustainable after about mid-century. That doesn’t mean they will all disappear at that time, but rather if they were subject to some kind of major disaster, they would be unlikely to be able to recover.

The statement reads: “Scientists estimate 90 per cent of the world’s coral reefs will disappear in the next 35 years due to coral bleaching induced by global warming, pollution and over-development.”

I am not familiar with every projection by every scientist, but it is not unlikely that some scientists have made such an estimate and it is possible that they could be right. It is also true that there would be scientists would would not think that that estimate was credible.

Assuming the scientists were correctly quoted, I would have been happier if they would have used the word “could” instead of “will” to express a sense of uncertainty.

Things are bad enough. If there are greater than 10% of coral reefs hanging on in year 2052, they are likely to be unsustainable and on their way out. I don’t want to allow apologists for environmental destruction to be able to point to those reefs and claim that scientists in 2017 were being unnecessarily alarmist.

Mark Eakin, Scientist, Coordinator of NOAA’s Coral Reef Watch, National Oceanic and Atmospheric Administration:
I rate this as accurate. While there is some variability among models and future greenhouse gas scenarios, the message from all of them is clear: we are likely to see near-annual bleaching, disease, and/or mortality on most of the world’s reefs by around mid-century.

John Bruno, Professor, The University of North Carolina at Chapel Hill:
This statement is misleading. It should have said, ‘Unless we immediately and substantially curb greenhouse gas emissions, global coral loss will continue and most living coral will be gone by the end of the century.’ (Yet note we’ve already lost at least 50-75%, maybe even 90% of living coral.)

There are plenty of dire predictions in the scientific literature on how ocean warming will impact coral reefs in coming decades. However, even the most pessimistic interpretations do not predict any reef will “disappear” in the next 35 years or even by the end of the century. Instead, what the science clearly indicates is that if we continue emitting greenhouse gases at our current rate, by mid-century tropical ocean temperatures in many regions will be high enough (1-2 C warmer than today) to cause regular (annual to semi-annual) bleaching events. But even after mass bleaching and mass coral mortality, the reef is still there. The coral skeletons that build up the reef don’t go anywhere in the near term.

The best evidence for this interpretation is that it all already played out in the Caribbean (and in many other regions). On the reefs I work on across the Caribbean, coral populations collapsed 30-40 years ago (from warming and disease) but all the reefs are physically still there. The loss of the corals is tragic and affects the functioning of the ecosystem, but still, Caribbean reefs lacking much coral can still be inhabited by a stunning diversity of fishes and invertebrates and staggering densities of animal life not seen in any other habitat on earth. They are still massively important for fisheries and tourism, despite the loss of most the coral.

I suspect the writer wanted to keep things simple, but they greatly oversimplified the problem and the changes scientists expect to occur. We will likely continue to lose reef-building corals at a rate of 1-2% per year, but zero % of the world’s reefs are expected to disappear. It’s really a story of community change, rather than loss (not to downplay the importance of those changes).

The science does suggest that ~ 10% of coral communities probably won’t be wiped out by warming this century. But that’s due to natural variation in warming rates and because some reefs in cooler regions will benefit from warming. 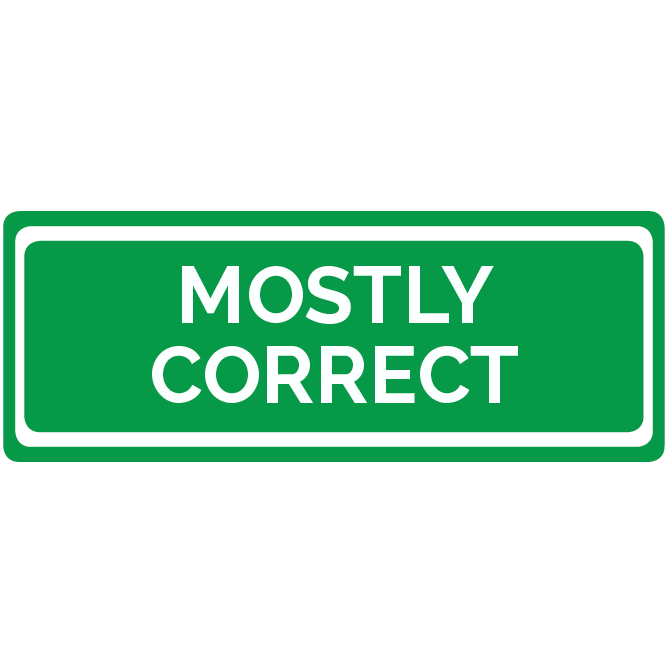 Scientists estimate 90 per cent of the world’s coral reefs will disappear in the next 35 years due to coral bleaching induced by global warming, pollution and over-development.