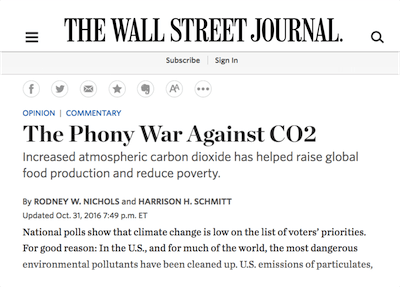 DETAILS
Lacks specifics : The claim does not give any indication of how much food production has grown due to increased carbon dioxide.
Inadequate support for claim : The authors did not provide evidence, or a quantified explanation of the connection between rising CO2 and food production observed on the field, to support their claim.
KEY TAKE AWAY

Continued CO2 emissions will not improve future crop production. Rather, the net result of further climate change will be to hinder global crop yields.

FULL CLAIM: Increased atmospheric carbon dioxide has helped raise global food production and reduce poverty.” … “With more CO2 in the atmosphere, the challenge [feeding 2.5 billion more people] can and will be met.

Wolfgang Cramer, Professor, Directeur de Recherche, Mediterranean Institute for Biodiversity and Ecology (IMBE):
There is absolutely no scientific study that would support such a conclusion. And even if there was no climate effect of CO2, a simple speculative growth enhancement by CO2 could not produce such an effect.

G Philip Robertson, Professor, Michigan State University:
In general, CO2 has had a positive effect on crop growth, but it’s impossible to separate historical effects from the greater effects of genetics and nitrogen and other inputs. However, it’s generally considered to be a fraction of those. We know better future effects because we have CO2 fertilization experiments in the field comparing present to future CO2 levels. Those experiments suggest that corn may have about a 1% gain [because of increased CO2] and soybeans 3-4 times that. However, these gains will almost certainly be offset by yield declines associated with the temperature increases caused by elevated CO2, which are well known.

James Renwick, Professor, Victoria University of Wellington:
The huge amount of CO2 that humanity has put into the atmosphere is changing the climate significantly. The hazard comes from changes to precipitation and extremes, leading to reduced food security and water availability. No wonder the Pentagon rates climate change as a critical threat to US national security. Just look at what’s happening in Syria and north Africa, on the back of a severe drought and a spike in food prices.