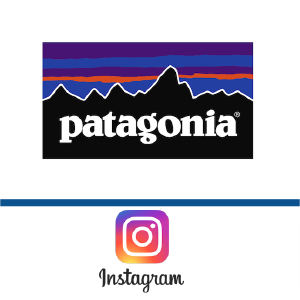 CLAIM
“The clothing industry contributes up to 10% of the pollution driving the climate crisis.”
VERDICT more about the rating framework

DETAILS
Accurate: Scientific studies and analytical reports from the United Nations and charitable organizations estimate that the fashion industry contributes 3 to 10% of global greenhouse gas emissions.
Lacks specifics: The claim does not specify the type of pollution the fashion industry is contributing to nor the source of this information. However, it likely refers to greenhouse gas emissions, primarily CO2, that drive climate change.

Globally, the fashion industry is estimated to contribute 3 - 10% of the greenhouse gas emissions that are causing climate change, based on scientific studies and reports from the United Nations and charities. The clothing industry has a variety of other environmental impacts, including intensive water use, water pollution through dying and textile production, and pesticide and herbicide pollution through the agricultural production of cotton. Microplastics, which are shed primarily from synthetic textiles during washing, are also polluting the oceans, potentially negatively impacting human health and natural ecosystems.

FULL CLAIM: “The clothing industry contributes up to 10% of the pollution driving the climate crisis.”

The claim appeared in an Instagram post published by the clothing company Patagonia in late November 2020, and has received more than 502,000 views. Although the post does not indicate the source of the claim, scientific studies estimate that clothing contributes 3 to 10% of greenhouse gas emissions that drive climate change[1,2]. In addition, clothing production and use causes water pollution, pesticide pollution, and the release of microplastics into the ocean that can negatively impact human health and natural ecosystems[3-5].

The environmental impact of clothing has increased since 2000, primarily due to the rise of “fast fashion,” which refers to the production of inexpensive, rapidly produced clothing that follows the latest fashion trends. As described in a 2014 IPCC report, “during the period 2000–2005, the advent of ‘fast fashion’ in the UK led to a drop in prices, but an increase in sales equivalent to one third more garments per year per person with consequent increases in material production and hence industrial emissions.”[6]

In 2017, the Ellen MacArthur Foundation, a charitable organization in the UK, published a report exploring the environmental impact of the fashion industry based on analyses from McKinsey & Company and contributions from more than 100 experts at academic institutions and in the fashion industry. While not a peer-reviewed publication, the report found that clothing sales doubled from 2000 to 2015, whereas the average number of times a garment is worn decreased by 36% (see figure below). 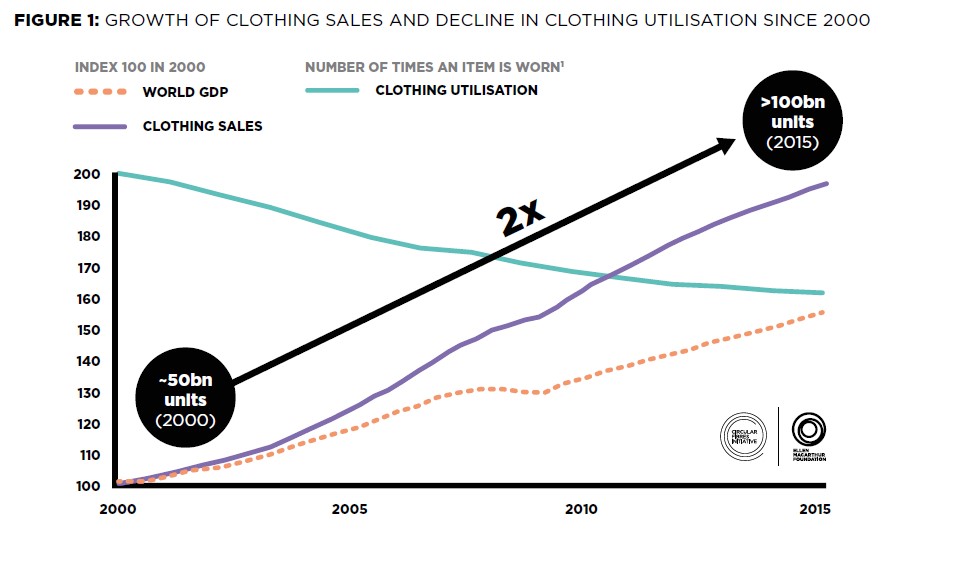 Figure—Global clothing sales and utilization from 2000 to 2015. From the Ellen MacArthur Foundation A new textiles economy: Redesigning fashion’s future (2017).

Figure—Contribution of clothing and other factors to the carbon (orange), land (green), material (yellow), and water (blue) footprint of EU households. Contributions to the environmental footprint, the quality of products bought (expenditure per capita), and the footprint intensity. From Ivanova et al. 2015[2].

Figure—Textile production and GHG emissions from various energy sources for the textile industry in China. From Huang et al. (2016)[7].

Some sources, including the Ellen MacArthur Foundation report and the United Nations Environment Programme (UNEP), estimate the global fashion industry contributes 1.2 billion tonnes of CO2 equivalent or 8 to 10 percent of global carbon emissions.

In addition to GHG emissions, the fashion industry has been linked to a variety of other environmental impacts, including intensive water and pesticide use as well as pollution to water, air, and soil[3-6]. As described in a report from the UNEP, “The fashion industry is the second-biggest consumer of water and produces 20 per cent of global wastewater.” For instance, a single pair of jeans consumes 3,781 liters of water, according to a Levi Strauss & Co. life cycle assessment.

Clothing also contributes to global microplastic pollution in the ocean, primarily through the washing process. One study estimates that synthetic clothing contributes 35% of microplastic pollution in oceans, with approximately 124 to 308 mg released for each kg of washed fabric[4]. An IUCN report, estimates that synthetic textiles consume 42,534 kilotons of plastic each year, a portion of which end up in the ocean[8].

Additional waste from the fashion industry occurs when clothes are discarded or incinerated. According to the Ellen MacArthur report, only 13% of clothes are recycled and less than 1 percent are recycled into new clothing. In contrast, the report estimates that 73% of clothing goes to landfills or is incinerated (see figure below). 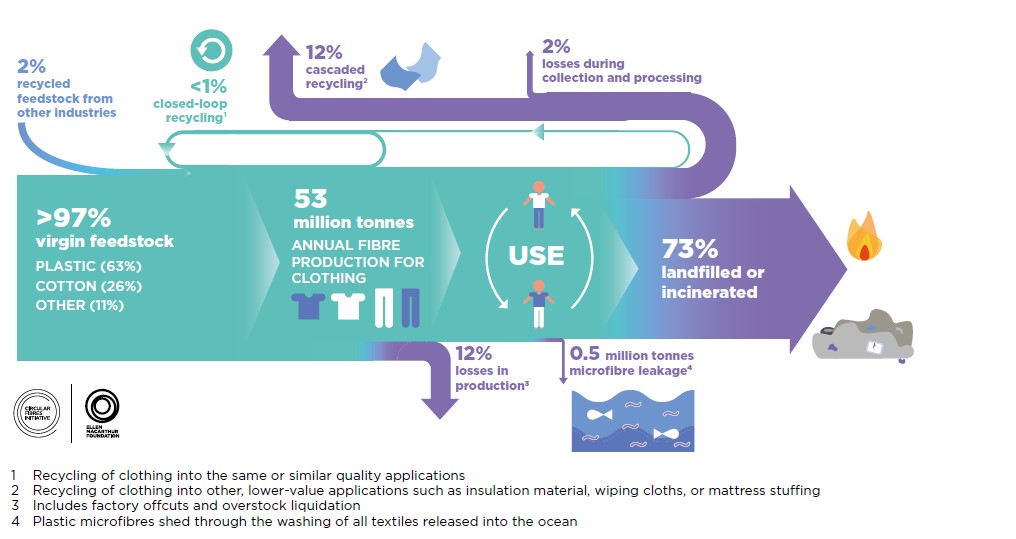 In addition to environmental impacts, the fashion industry also impacts human health and wellbeing. For example, a 2016 study found the demand for clothing and textiles often depends on low-cost labor, primarily in Brazil, Russia, India, and China[9].

Overall the claim, “the clothing industry contributes up to 10% of the pollution driving the climate crisis” is accurate, as it falls within 1 to 10% range of estimates for GHG emissions in scientific studies and organization reports. In addition, clothing production and consumption can be an energy- and water-intensive process that causes water pollution, microplastic release, and human health impacts.

I’d say this is accurate. Typically studies put clothing between 3-10% of greenhouse gas emissions. There’s a brief write up of this in my thesis (section 2.3.3 page 42-43). This is aging now, but I see no reason the core estimates would have changed. This slightly more recent paper also puts clothing in the same range[9].

Ten percent is probably at the higher end of estimates, but still has a solid basis in the science. The issue with carbon footprint estimates is that they are very sensitive to different assumptions, methods, and/or data, so a 10% range is probably within an acceptable margin of error.

The claim [that the fashion contributes] up to 10% [of pollution driving the climate crisis] is not very far from  the United Nations’ research estimate, which is 8%.

Elisa Tonda, Head of the Consumption and Production Unit at the UN Environment Programme (UNEP), one of the 10 UN bodies involved in the Alliance, explained the urgency behind its formation in a UN News article: “The global production of clothing and footwear generates 8% of the world’s greenhouse gas emissions and, with manufacturing concentrated in Asia, the industry is mainly reliant on hard coal and natural gas to generate electricity and heat. If we carry on with a business-as-usual approach, the greenhouse gas emissions from the industry are expected to rise by almost 50% by 2030.”

However, I have no access to the UN environment programme original report to confirm how this number was calculated.

There is a more recent claim from our field that was published in a report authored by McKinsey & Company and Global Fashion Agenda, which estimates the fashion industry contributes roughly about 4% of the global emission.

From a study that investigated the total emission of fashion and textiles production in China, the figure is even higher, assuming that China is responsible for 40 to 50% of global fashion and textiles production over the past 10 years[7]. This study projected the GHG emissions based on China’s government electricity, and combustion data using different energy sources. The China textile industry (50% of global production) is at 18.486 billion CO2 tons in 2020. This figure is surprisingly high. If it’s true, the global fashion and textiles GHG emission would be around 18.46 billion tons doubled, which is 36.9 billion tons in the best case scenario, which is close to 10 times higher than the 2nd source stated. Based on the energy consumption of textiles and fashion production in China, the pollution is very serious.

The annual GHG pollution composition is just the tip of an iceberg. The microplastic problem causing water pollution is accumulating, and the negative effects to our ecosystem and human health is long lasting. It is far more devastating than GHG emission in a particular year.