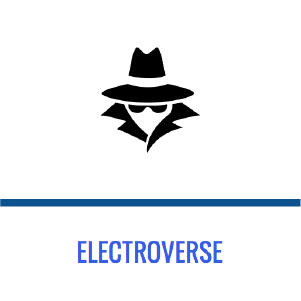 DETAILS
Flawed reasoning: The U.S. occupies a very small percentage of the world. Global warming trends cannot be determined based on local daily temperature records in a small number of locations.

Land surface, sea surface, and atmospheric temperature data all show trends of global warming. The warming trend observed over the past century is correlated with increased levels of CO2.

FULL CLAIM: Historical data destroys the global warming myth, and people are waking to it. According to NOAA’s own historical data, of the 50 U.S. state all-time record high temperatures, 23 were set during the 1930s, while 36 occurred prior to 1960 — climate change proponents are feeding us a fairy tale, and I’m sick of it.

Scientific studies have demonstrated consistent warming trends around the world (see the figures below)[1,2]. As described in Neukom et al. (2019), “the warmest period of the past two millennia occurred during the twentieth century for more than 98 percent of the globe.”[3]

Historical data from NOAA clearly shows a warming trend in the U.S. as well from January 1895 to December 2019 (see the figure below). 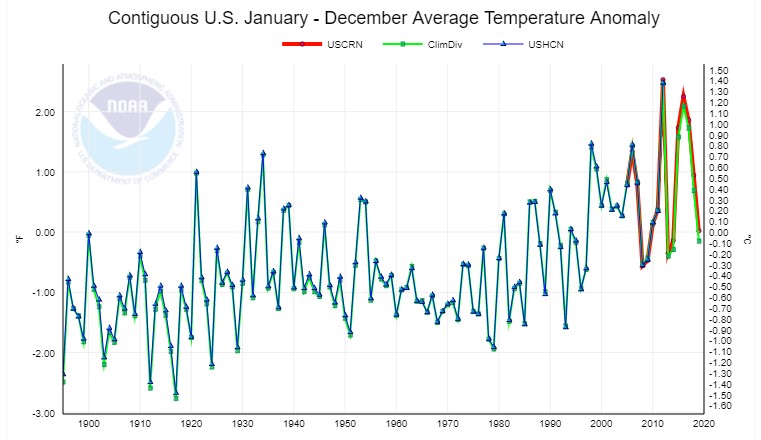 The global warming trends in the U.S. are “noisier” than the global data set, primarily because the U.S. only occupies ~2 percent of the world and regional, natural oscillations in temperature are more apparent. Although the specific claim that “of the 50 U.S. state all-time record high temperatures, 23 were set during the 1930s, while 36 occurred prior to 1960” is consistent with NOAA data, this data does not follow maximum temperature trends observed in other regions around the world. King (2017) describes, “Many heat records in the central U.S. still date from the 1930s Dust Bowl period when unusual atmospheric flow and very dry spring periods allowed severe heat extremes to develop (Donat et al., 2016), but in most other parts of the world, current temperature records date from the last few decades.”[4,5]

Furthermore, local daily temperature records are not suitable measurements for assessing global warming trends. This claim relies on maximum temperature records collected at a single station in each state. Temperature data from a single station can be influenced by several factors, including time of day the measurement was taken, the angle of the sun, and instrument variation, as Victor Venema explains in the comments below. Lastly, maximum temperature records do not necessarily reflect the warmest years on record nor the average number of warmest days for each state. For example, although the 1930s were relatively warmer than the 1920s and 1960s, it was not warmer than the past two decades.

In conclusion, the fact that some local daily heat records were set in the 1930s can not be used as evidence that a warming trend is not happening at the global scale.

Victor Venema, Scientist, University of Bonn, Germany:
The post does not support the erroneous claim that historical data destroys the global warming myth. It did not even look at global warming, in other words it did not look whether the global mean temperature shows a long-term increase.

The post looked at station data in America, which only covers about 2% of the Earth. Global warming is about the globe. America is known for the Dust Bowl in the 1930, which produced many heat records. While we also expect heat waves to increase, the relationship between the average temperature and record temperatures is complicated, if records would not increase that would not invalidate the increase in the mean. That would require study of the mean temperature.

The post looked at raw data, which is not well suited to study warming. For example modern automatic weather stations measure a somewhat smaller temperature than traditional Cotton Region Shelters. You can see this by making side by side measurements with both instruments. In as far as this difference is due to the sun influencing the temperature observations it will be larger for summer temperatures, for the maximum temperature and especially for heat waves and droughts. Global warming is about actual warming, not about changes in the instrumentation.

For all of the above reasons the claim about global warming does not fit to the presented evidence and would never hold up in the scientific literature, which the authors bypass to directly deceive their readers most of whom will not be aware of the above problems.

Global temperature datasets, developed by a number of independent research groups, show robust warming in the troposphere and at the Earth’s surface. The radiative effect of carbon dioxide has also been observed[6]. Considering multiple lines of evidence, the IPCC concluded that it is “extremely likely that human influence has been the dominant cause of the observed warming since the mid-20th century.” More recent analysis of satellite data shows that tropospheric warming from the satellite record is pronounced and cannot be explained by natural climate variability alone[1].

World temperatures measurements began in the 1800s and show a warming burst since the 1970s. Last year we checked with satellite scans of the ocean, confirming the accuracy of the surface measurements[2]. Global warming is a measured fact.