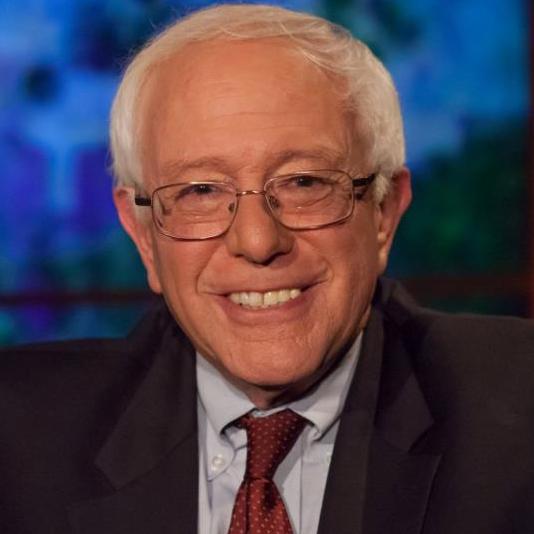 DETAILS
Overstates scientific confidence: Research clearly shows that certain types of weather extremes are increasing as a result of climate change, but it is not clear how tornadoes are responding to a warming climate.
KEY TAKE AWAY

Human-caused climate change is known to be having an influence on some types of weather extremes, including heat waves and intense rainstorms. However, scientists aren't certain about certain other types of weather, either because historical data are insufficient to detect trends or because it's unclear how those weather patterns will respond to warming. It is not currently clear how climate change affects tornadoes.

Andreas Prein, Project Scientist, National Center for Atmospheric Research:
Sen. Sanders’ is partly correct since there is a lot of scientific evidence that climate change increases the frequency and intensity of many extreme events such as heat waves, droughts, wildfires, or extreme rainfall. However, it is not clear if climate change will make U.S. tornadoes worse or more frequent. The observational record does not show any significant change in the frequency of U.S. tornadoes in the last 60 years but there is a tendency that more tornadoes occur during big outbreak days such as in the recent Alabama event[1] and there are spatial shifts in the occurrence of tornadoes[2]. Whether these changes are related to climate change is, however, unclear.
Adam Sobel, Professor, Columbia University:
Sen. Sanders’ statement is inaccurate with regard to tornadoes. It is possible that climate change may be influencing tornadoes, but the evidence for that so far is weak, and our understanding of the problem is poor at this point. So it is not true that “the science is clear” on this topic.
Longer answer: Sanders would have been broadly correct if he had left out the “including tornadoes” phrase. There is strong evidence that climate change is making some kinds of extreme events worse. Heat waves and heavy rain events are perhaps the best examples; hydrological drought and wildfire (both being influenced by warmer temperatures in relatively simple ways) are others. The influence of climate change on some other kinds of extreme events is more uncertain, and tornadoes are perhaps the most uncertain of all. There is no agreement among scientists about even what influence climate change should have on tornadoes. Our physical understanding of what controls tornadoes suggests that global warming should have at least two different effects[see below]; these act in opposite ways and we don’t know which is stronger, so we don’t know if there should be more or fewer tornadoes with warming, for example. Climate models can’t simulate tornadoes so they are little help, and the observations thus far are not much help either. It is true that there are observed recent historical trends in some measures of tornado activity, as in the paper[2] [cited by the article Sen. Sanders was sharing on Facebook]. But those are mostly spatial shifts in where tornadoes have been occurring recently and do not indicate an overall increase in either the numbers or intensities of tornadoes nationwide, nor is there any good evidence that those trends result from climate change as opposed to natural variability. The authors of the study say as much: “At this point, it is unclear whether the observed trends in tornado environment and report frequency are due to natural variability or being altered by anthropogenic forcing on the climate system.”

Climate Feedback:
It is likely that a warmer, moister world would allow for more frequent instability as measured by the convective available potential energy which is fueling tornadoes[3]. However, it is also likely that a warmer world would lessen chances for wind shear, leading to fewer tornadoes. Climate change also could shift the timing of tornadoes or the regions that are most likely to be hit, with less of an impact on the total number of tornadoes. 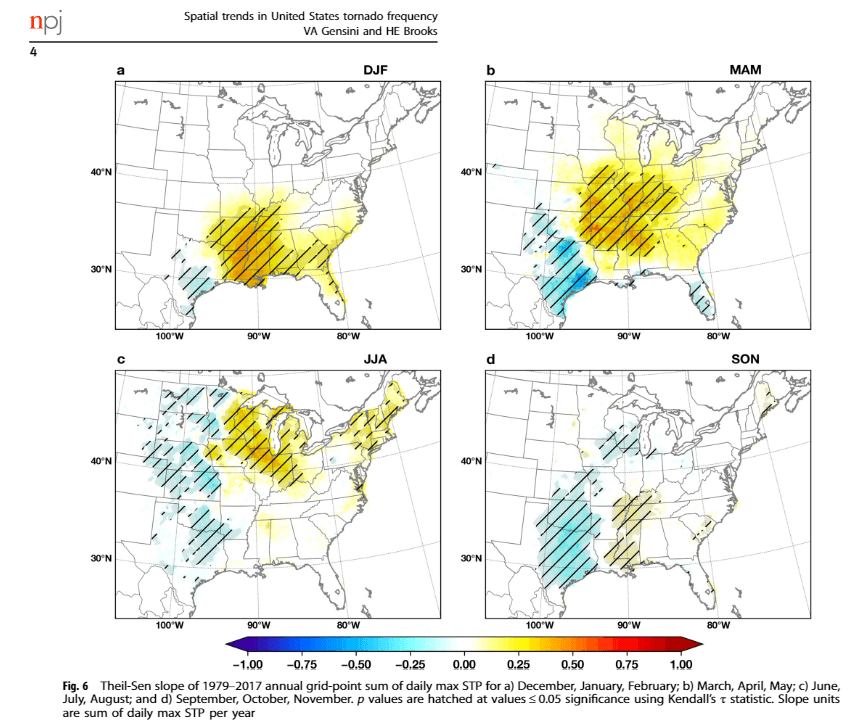 Figure — Map showing the increasingly favorable tornado conditions in the SE and a decrease in the west as measured by the Significant Tornado Parameter (STP). The STP shows when the atmospheric wind shear and instability are favorable for tornadoes to develop. (from Gensini and Brooks[2])