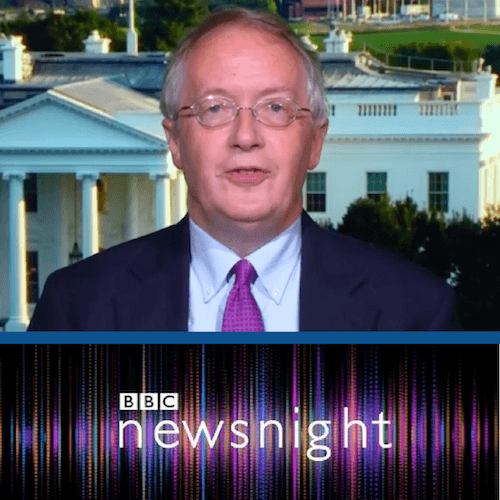 DETAILS
Factually Inaccurate: This claim is simply not true—climate models run in the past have accurately predicted the current rate of warming.
KEY TAKE AWAY

FULL CLAIM: The rate of warming according to the data is much slower than the models used by the IPCC

Reto Knutti, Professor, ETH Zürich:
[This comment is taken from an evaluation of a similar claim.]
The statement that climate models overestimate the warming in response to CO2 is incorrect; it is based on either too short time periods that are dominated by natural variability, by the comparison of models with datasets that do not have global coverage, by comparing to models that were run many years ago with emissions and forcings that differed from what actually happened, by the use of oversimplified energy balance models1, or a combination of it. Recent studies have shown that once the changes in climate feedbacks over time2, datasets with full coverage are considered3 and all forcings are considered, the agreement between predicted and observed warming is excellent, even over the recent hiatus period4.

Patrick Brown, Postdoctoral Research Scientist, Carnegie Institution for Science:
[This comment is taken from an evaluation of a similar claim.]
This argument reached a peak in popularity around 2012/2013 when the “hiatus” was still ongoing (i.e. when the divergence between observed and modeled global temperature was at its largest). Even then, however, it was shown that you cannot conclude much about sensitivity to CO2 from such short-term fluctuations1. Similarly, Brown et al. (2015)2 showed that decade-long periods without warming are to be expected and that there was/is a 70% chance of seeing at least one 11-year period with no warming between the years of 1993-2050 under a “middle of the road” emissions scenario. 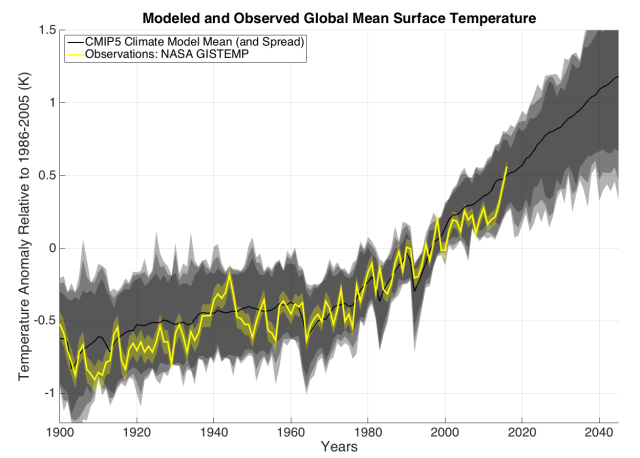 Markus Donat, Research Fellow, University of New South Wales:
[This comment is taken from an evaluation of a similar claim.]
For example, this study by Rahmstorf and colleagues* shows how projections from past IPCC reports (future projections starting in 1990 and 2000) very well predicted the observed temperature changes since then. 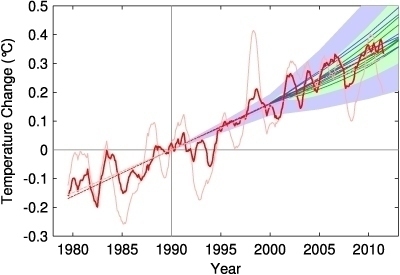 Zeke Hausfather, Research Scientist, Berkeley Earth:
[This comment is taken from an evaluation of a similar claim.]
At the surface models predict a rate of warming of 0.2°C per decade since 1970, while NASA observes warming of around 0.18°C during the same period[…] Similarly, the observations from all the different groups that measure global surface temperatures are well within the envelope of model projections: