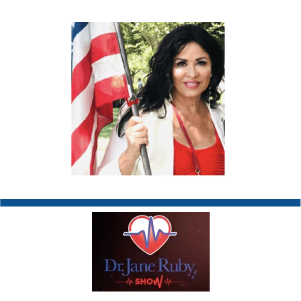 DETAILS
Inadequate support: Ruby's claim that “fibrous clots” in the lungs were due to COVID-19 vaccines is based solely on an unverified anecdote using a photo of unknown provenance. Gelatinous masses resembling a cast of the airways are caused by a condition called plastic bronchitis. This medical condition was already described prior to COVID-19 vaccines, contrary to claims made by Jane Ruby. COVID-19 vaccines haven’t been reported to cause plastic bronchitis. The claim that such masses are forming in blood vessels is also unsubstantiated by evidence.
KEY TAKE AWAY

On 27 April 2022, a video published by the Dr. Jane Ruby Show went viral on social media, in which Jane Ruby attributed the formation of “fibrous clots” in the lungs to COVID-19 vaccines. In the video, Ruby showed an image of a white gelatinous mass, resembling a cast of the airways. Ruby claimed that the image had been sent to her by a nurse and that this gelatinous mass was coughed up by a 32-year-old patient in the ICU, who had received two doses of the COVID-19 vaccine and was described as otherwise healthy. Ruby claimed that this medical condition had not been previously seen.

Ruby didn’t provide information that would allow viewers to ascertain the provenance of the photo or the veracity of the claims about the patient. However, gelatinous masses in the lungs, resembling the one shown in Ruby’s video, were described well before COVID-19 vaccines were even developed. Mentions of such a disease date back to 1861[1]. These are caused by a rare medical condition called plastic bronchitis, which can have different causes, including asthma, tuberculosis, cystic fibrosis or rheumatoid arthritis[2]. Another cause of plastic bronchitis is the leaking of lymphatic fluid into the lungs, which is called lymphatic plastic bronchitis[3].

Lymphatic plastic bronchitis is characterized by the formation of large, highly branched bronchial casts, in which the accumulated lymphatic fluid takes a gelatinous consistency[3]. In contrast, smaller and simpler structures are usually formed when the cause is other than lymphatic disease. Plastic bronchitis causes breathing difficulties and coughing, which can sometimes result in the bronchial cast being coughed up. 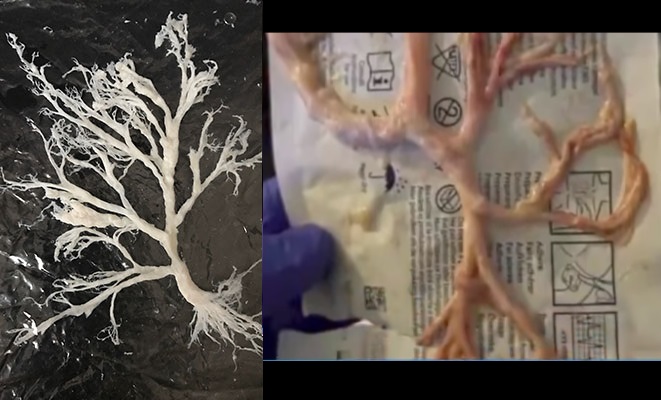 The gelatinous mass shown in Ruby’s video (right) appears very similar to a bronchial cast caused by plastic bronchitis (left). These large, highly branched casts are usually formed due to leaking of lymphatic fluid into the lungs. Picture on the left from Penn Medicine.

Ruby claimed that this gelatinous mass was caused by COVID-19 vaccines, stating that the vaccines contain “self-assembling nanoparticles”. There is no evidence that COVID-19 vaccines contain self-replicating materials, as this previous Health Feedback review explained. The material that forms bronchial casts comprises various proteins like mucin or fibrin, and even different types of white blood cells, depending on the cause of the plastic bronchitis[4].

A video published on Facebook in early August 2022 by Jeremy Slayden, an entrepreneur and former professional baseball player, made a claim similar to Ruby’s, specifically that gelatinous masses are forming in the blood vessels of people who were vaccinated. The video clip is an excerpt of an InfoWars video claiming that “engineered bio structures” were removed from vaccinated adults. In a reply to a user’s comment on the same video posted to TikTok, Slayden wrote that “The V word” had been edited out of the video, likely a reference to the COVID-19 vaccines. But as with Ruby’s claim, no evidence is provided to substantiate the claim that the gelatinous masses presented in the video originated in vaccinated people or are the result of “engineered bio structures”.

This isn’t the first time that Ruby falsely claimed the COVID-19 vaccines contained dangerous materials. In the video, Ruby also repeated several debunked claims about COVID-19, such as the claim that there is no asymptomatic transmission of the disease (which was covered in this previous Health Feedback review) or that young children have a 100% chance of recovery (which was covered in this other Health Feedback review). Ruby also claimed that COVID-19 vaccines were the cause of blood clots found in the lungs of dead bodies, a claim that isn’t substantiated by scientific evidence, as Poynter explained.

This review was updated to include another iteration of this claim by entrepreneur Jeremy Slayden, originally published on the conspiracy theory website InfoWars.