DETAILS
Factually inaccurate: Menstrual cycles don’t require human intervention or human-made compounds. Indeed, the physiological effects of menstrual cycles, such as ovulation and bleeding, are triggered and regulated by a complex set of hormones. Furthermore, menstruation isn’t unique to humans. Some wildlife species such as bats and primates also menstruate. If it were due to human intervention, we wouldn’t see menstruation in those wildlife animals.
KEY TAKE AWAY

Periodic ovulation, thickening and then destruction of the uterine wall, and blood loss are hallmarks of the menstrual cycles. The periodicity of these morphological events mostly depends on a complex set of hormones whose blood concentrations cyclically vary. While rare, menstrual cycles exist in several mammalian species, including primates, bats, and mice.

Most women experience menstrual cycles at some point during their lives, with all their characteristic physiological consequences such as ovulation or blood loss. Accounts of menstruation can be found in many ancient cultures such as ancient Egypt or ancient Greece.

However, some social media users claimed that “The menstrual cycle isn’t natural”. In order to assess the accuracy of this claim, we first need to consider what is natural and isn’t. We can reasonably consider a process to be natural if it doesn’t require human intervention or synthetic compounds to exist or happen.

As we will explain below, the evidence shows that menstrual cycles and menstrual blood loss are natural, as they occur spontaneously without the need for human intervention. Rather, they can be explained by the periodic changes in hormone concentrations in the body.

The hormonal cycle and periodic menstruation in women

A physiological hallmark of the menstrual cycle is the periodic thickening and shedding of the tissue lining the wall of the uterus, which is rich in blood vessels, called the endometrium. Its destruction is accompanied by the characteristic blood loss through the uterus and vagina, called menses. The biological mechanisms regulating menstrual cycles are well established and mostly involve specific hormones with cyclically changing concentrations in the blood.

The menstrual cycle can be divided into two main phases, the follicular phase and the luteal phase. During the follicular phase, several ovarian follicles—the structure surrounding a given egg—grow and mature, eventually leading to the release of the egg from one of the follicles (Figure 1). During the luteal phase, following ovulation, the endometrium lining the uterine wall thickens and grows many new blood vessels. If the egg isn’t fertilized, the thick endometrium is destroyed, releasing menstrual blood into the uterus and then out of the body[1,2]. 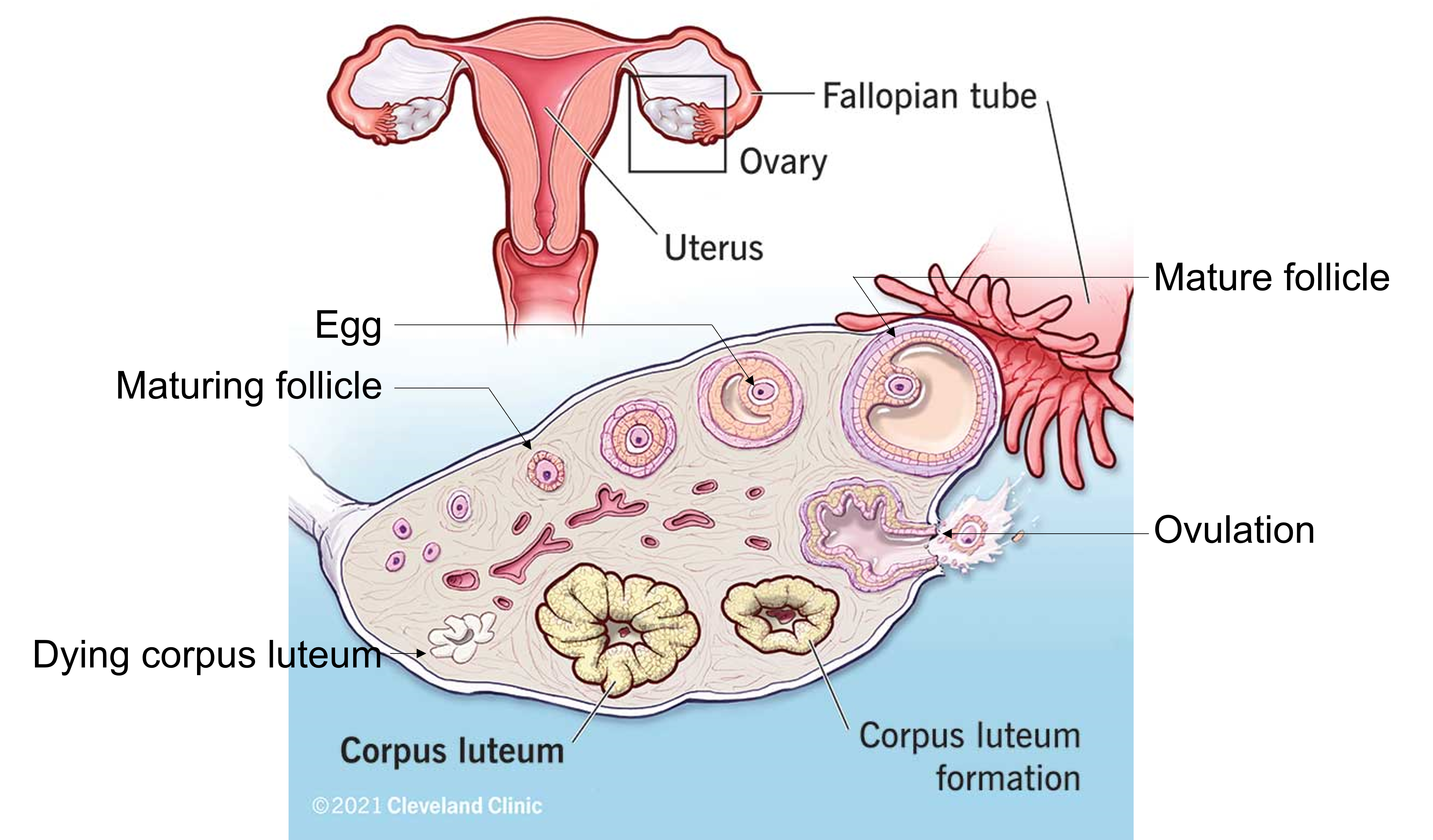 Figure 1. Anatomy of the ovary with follicles presented at different stages of the menstrual cycle. Circulating clockwise from the “maturing follicle”, the follicle grows and matures during the follicular phase, producing the egg, which is seen as the lone, large cell. Then the egg is expelled into the fallopian tube during the ovulation. During the luteal phase, the remains of the follicle turn into the corpus luteum, which survives for a while before being resorbed and dying (adapted from the Cleveland Clinic).

A complex interplay of hormones controls this cycle. The pituitary gland, located at the base of the brain, produces two hormones, the follicle stimulating hormone (FSH) and the luteinizing hormone (LH), that are released into the bloodstream. These hormones foster the growth and maturation of ovarian follicles, which contain the eggs. This is the beginning of the follicular phase (Figure 2). 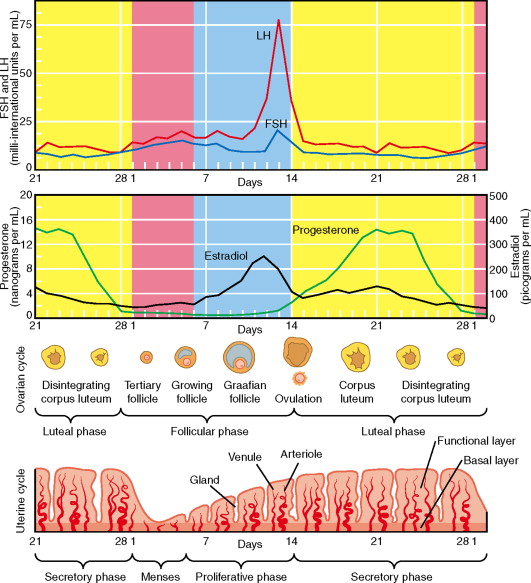 The growing follicles, in turn, produce the hormone estrogen, which causes the endometrium to thicken. The thickening of the endometrium enables the uterus to prepare itself for a potential pregnancy. As the estrogen blood level rises, it triggers the pituitary gland to deliver a higher load of LH, called the LH surge. This LH surge is what triggers the ovulation.

Following the ovulation, what is left from the follicle, now called corpus luteum, begins to produce another hormone, progesterone, in addition to estrogen. This is the beginning of the luteal phase. Progesterone, in combination with estrogen, causes the uterus to thicken even more and to become strongly vascularized, meaning that it contains many new blood vessels[1,2].

Over time, the corpus luteum withers and dies. With the death of this source of estrogen and progesterone, the blood level of these hormones decrease, and the signals that promote the thickening of the endometrium disappear. Consequently, part of the endometrium begins to degenerate and die, releasing tissue and menstrual blood into the uterus.

Therefore, there is a well established biological model of how the menstrual cycle works, which only requires natural hormones to be regulated. The fact that we are able to explain the phenomenon with natural molecules and mechanisms only speaks against the claim that menstrual cycles aren’t natural.

Humans aren’t the only mammals to menstruate

Periodic menstruation is a rare phenomenon in mammals. In non-menstruating mammals, it’s the young embryo that triggers the thickening of the endometrium[3]. Therefore, there’s no thick, pregnancy-ready endometrium in absence of an embryo. However, several mammalian species experience a spontaneous endometrium thickening. In that case, the females of the species undergo the cyclical growth and destruction of the endometrium, even in absence of an embryo, that we know as menstrual cycles[3].

Aside from humans, other primates, such as great apes—orangutans, chimpanzees, bonobos, gorillas—also display a cyclical, spontaneous endometrium thickening, followed by its destruction and menstruation[4].

While several hypotheses exist as to how certain species evolved into presenting spontaneous endometrium thickening and menstrual cycle, the fact that other mammals, including monkeys, bats, and mice, menstruate further demonstrates that menstrual cycles are a natural, albeit rare, phenomenon among mammals that doesn’t require human intervention to happen.

In summary, there is ample evidence that varying levels of hormones induce and control the menstrual cycles in women. Moreover, several other mammalian species also experience menstruation, showing that the menstrual cycle is natural, as it requires no human intervention or the use of human-made compounds.