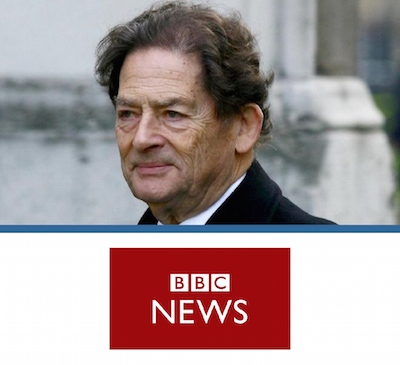 CLAIM
according, again, to the official figures—during this past 10 years, if anything, mean global temperature, average world temperature, has slightly declined
VERDICT more about the rating framework

Global temperature has continued to rise during the last decade. The three warmest years on record are 2014, 2015, and 2016.

FULL CLAIM: And as for the temperature itself, it is striking, [Gore] made his previous film 10 years ago and—according, again, to the official figures—during this past 10 years, if anything, mean global temperature, average world temperature, has slightly declined.

UPDATE (18 Aug 2017): The Global Warming Policy Forum, of which Lord Lawson is the chairman, tweeted that Lord Lawson’s statement was based on a chart that is “erroneous”. Read more

Andreas Prein, Project Scientist, National Center for Atmospheric Research:
I am wondering which official figures Lord Lawson speaks about since the year with the hottest global mean temperature is currently 2016, the second hottest is 2015, and third is 2014 according to data sets from NASA, the Climatic Research Unit, and the National Oceanic and Atmospheric Administration. In fact, according to these data sets the last 10 years saw some of the most rapid global mean temperature increases in observed history. Below is a figure that shows the data from NASA. 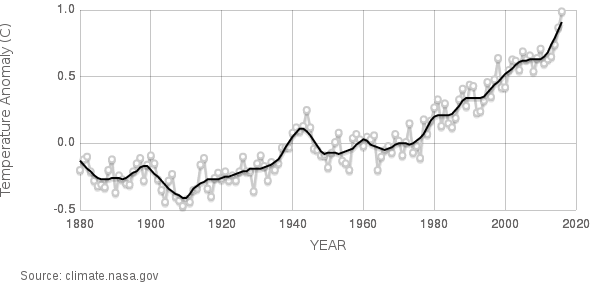 Ken Caldeira, Senior Scientist, Carnegie Institution for Science:
Multiple independent analyses have concluded that years 2014, 2015 and 2016 were the hottest annual global mean temperatures ever observed by modern humans. It would be mathematically impossible for the hottest years to appear at the end of 10 years of declining temperature. An example of such temperature records is available here.

It is obvious and clearly demonstrable that this statement made by Lord Lawson is false. 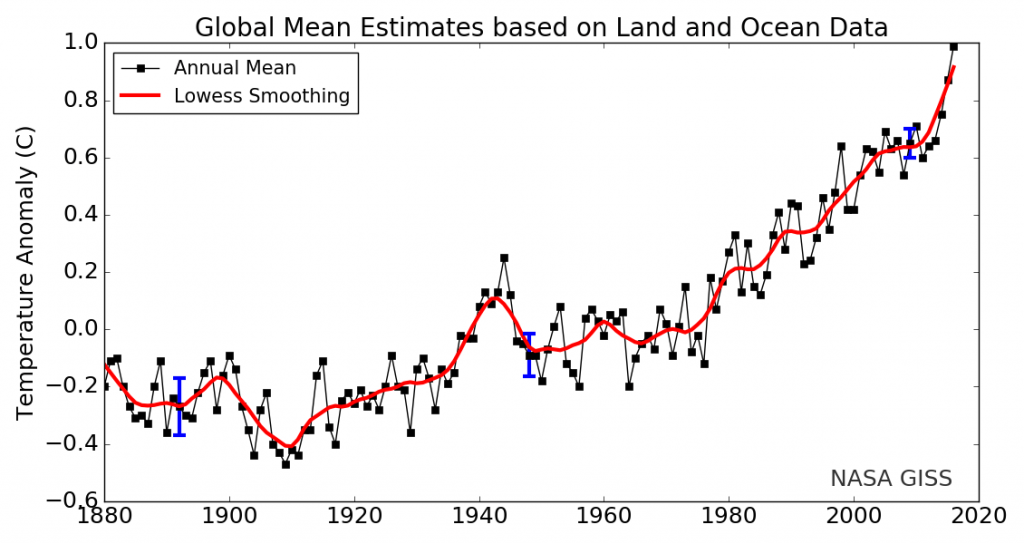 Twila Moon, Research Scientist, University of Colorado, Boulder:
It’s not clear why Nigel Lawson would think that he should only mention 10 years of global temperature data. We are now able to look at trends that are much longer than 10 years. In fact, when looking at climate trends it is especially useful to look at 20+ year records. Many different groups are studying global temperature and there is a clear consensus that the Earth has been warming over the last several decades. It is critical to remember that short-term fluctuations in the record are expected, but do not negate the long-term march of increasing global temperatures. This is true regardless of the trend over the last 10 years. Furthermore, the scientific evidence actually points towards warmer temperatures over the last decade*. NASA keeps a nice up-to-date global temperature graph in it’s Vital Signs.

Victor Venema, Scientist, University of Bonn, Germany:
It would be hard to be more wrong. The graph below shows the “official” figures. 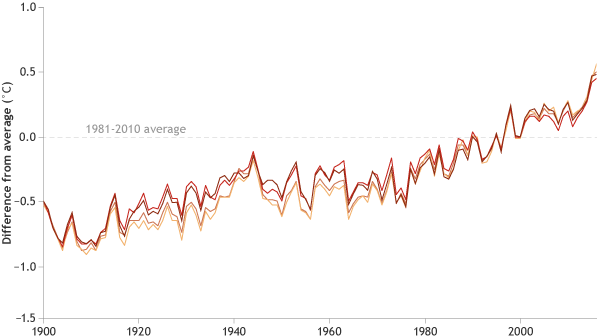 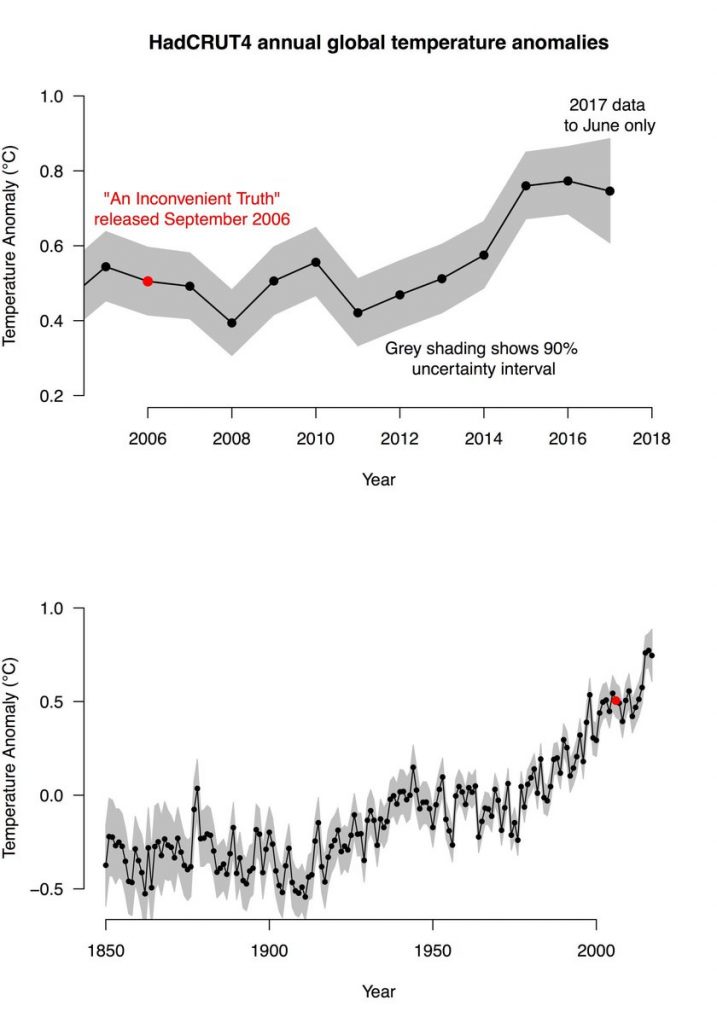 Ten years is very short to judge whether the climate is changing. But in the figure you can see that the three hottest years on record occurred in 2014, 2015 and 2016. 2017 is on track to be among the hottest again. 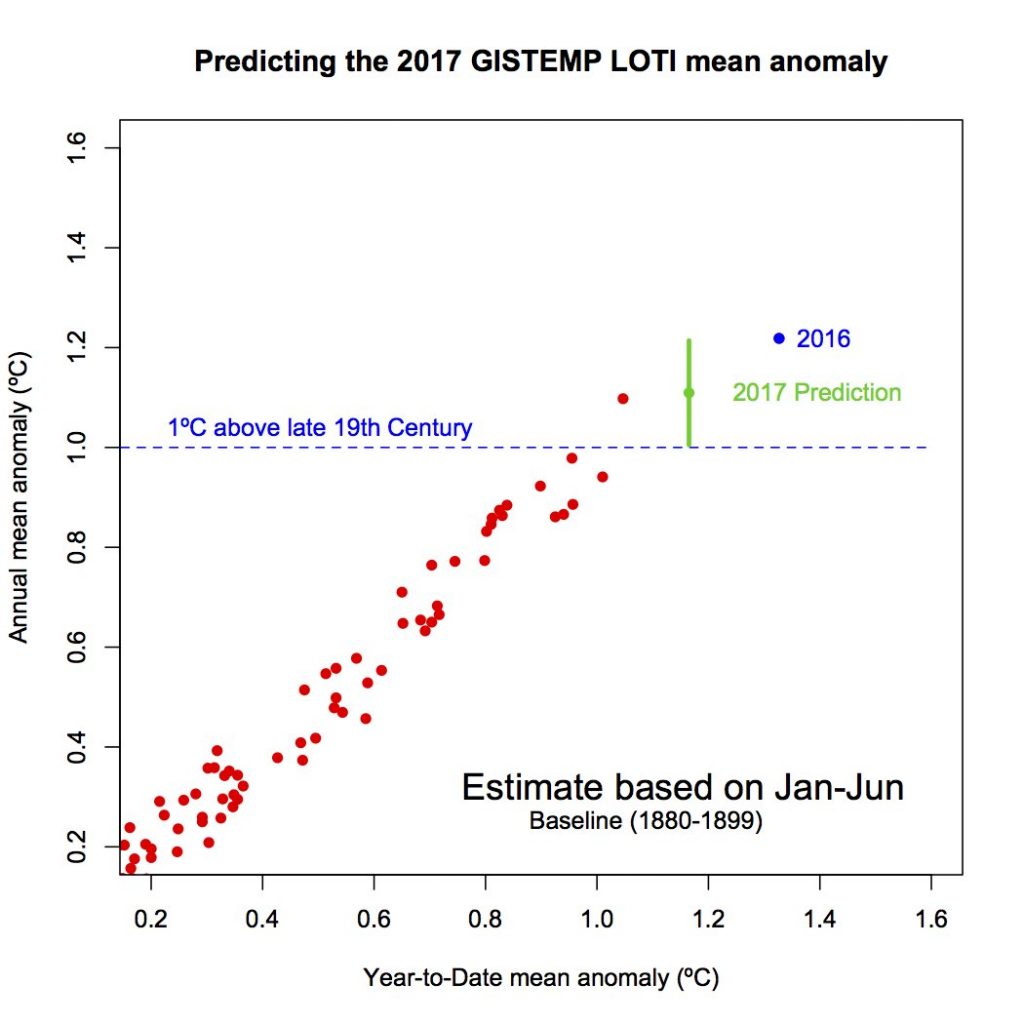 Adam Sobel, Professor, Columbia University:
The statement about the last 10 years is patently false. Each of the the last three years—2014, 2015, and 2016—has been the warmest in history. It might have been true, in a narrow sense, if it had been made a few years ago; but even then it would have been highly misleading, since the predictions about global warming apply to long-term averages, not individual decades. Each decade since the mid-20th century has been warmer than the one before, without exception.

Ed Hawkins, Principal Research Fellow, National Centre for Atmospheric Science:
This statement by Lord Lawson is entirely untrue. Over the last 10 years, every surface global temperature dataset shows a clear rise in temperatures with 2014, 2015 & 2016 being the warmest years on record. The latest estimates of global atmospheric temperature, as measured by satellites, also show a warming trend over the past 10 years.

Richard Betts, Professor, Met Office Hadley Centre &amp; University of Exeter:
This statement is not true. The official figures do not show that the global mean temperature “has slightly declined”. In fact they show the opposite – global mean temperature has increased during the past 10 years. The last 3 years were warmer than the previous 7 and indeed were the warmest in record, and this year is also shaping up to be nearly as warm (probably not quite as warm as last year since the influence of the El Nino has passed, but still a very warm year). This is very clearly seen in the Met Office dataset, which happens to be shown prominently on the websites for Lord Lawson’s organisations, the Global Warming Policy Foundation and the Global Warming Policy Forum – so his claim is contradicted by information that headlines his own websites. 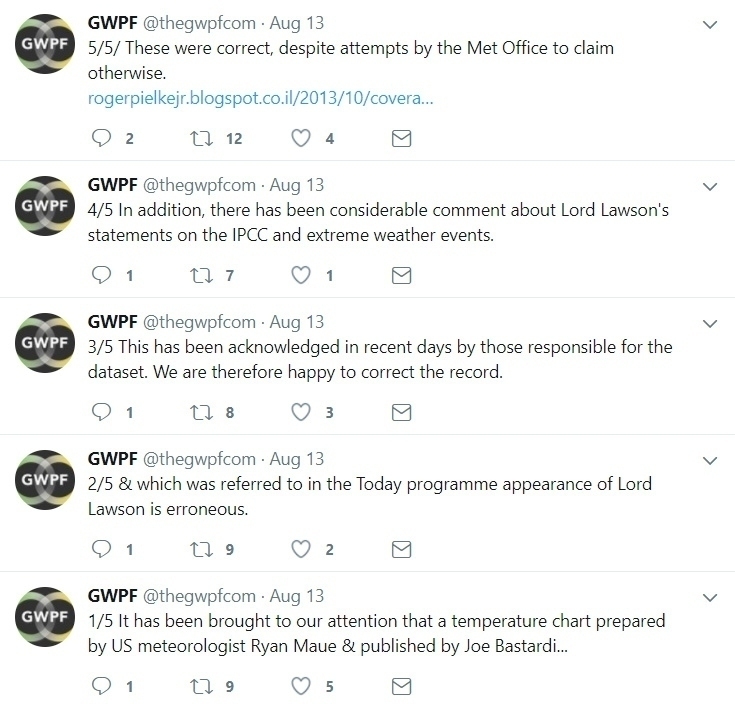