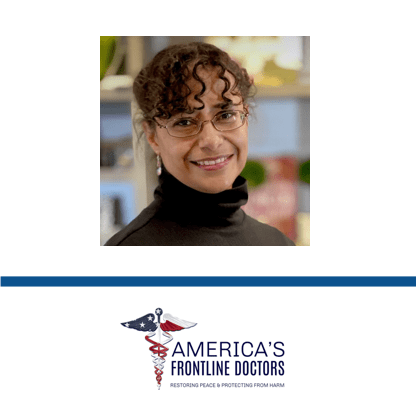 CLAIM
Face masks cause hypercapnia and blood acidity, which might increase cancer risk
VERDICT more about the rating framework

DETAILS
Incorrect: Face masks can’t block gas exchange because gas molecules are much smaller than the face mask pores. Therefore, face masks are extremely unlikely to cause a significant increase in the levels of carbon dioxide in the blood.
Flawed reasoning: The claim that face mask-induced acidity facilitates cancer development has no scientific basis. No evidence indicates that face masks cause hypercapnia in the first place.
KEY TAKE AWAY

Face masks act as a physical barrier that blocks infectious respiratory droplets. However, mask pores are still big enough to allow tiny gas molecules, including carbon dioxide, to pass through. Therefore, wearing a face mask can’t cause carbon dioxide to accumulate in amounts significant enough to cause blood acidity. Furthermore, cancer is caused by mutations.

FULL CLAIM: “And then we are going to mask our children, knowing that if they have cancer it’s going to be very permissive and feedback cancer? Knowing that it may be permissive for getting cancer?”

A video featuring molecular biologist Christina Parks circulated on video and social media platforms (examples here and here) in October and November 2022. In that video, Parks claimed that face masks cause carbon dioxide to accumulate in the blood, turning it acidic. She added that this acidic environment might be “permissive for getting cancer”.

Parks’ speech was originally posted on the website of the group America’s Frontline Doctors on 6 September 2022, where it was viewed more than 3,400 times. The group later shared the video on Twitter, receiving more than 7,000 interactions and 4,600 retweets.

The organization America’s Frontline Doctors is well-known for spreading misinformation about COVID-19 vaccines and promoting unproven COVID-19 treatments. This behavior led the U.S. House Select Subcommittee on the Coronavirus to launch an investigation into the group in October 2021. The investigation is still ongoing. Parks was also criticized for spreading misinformation about COVID-19 and COVID-19 vaccines in front of the Michigan Legislature when she testified in support of a bill (HB4471) that would prohibit employers from mandating vaccines at the workplace.

Parks based her claim about face masks and cancer on two arguments. The first one is that face masks increase the level of carbon dioxide in the blood to the point that it turns acidic. The second one is that this resulting respiratory acidosis increases the risk of developing cancer. But as this review will explain, no scientific evidence supports either of these claims.

Carbon dioxide is a gas that the body produces as a waste product when it burns food for energy. In a healthy body, carbon dioxide is transported in the bloodstream to the lungs, and is eliminated through breathing. However, certain medical conditions can alter the balance between carbon dioxide production and clearance. This can cause carbon dioxide to accumulate in the body at harmful levels. When these levels exceed a certain threshold, the condition is called hypercapnia.

Symptoms of hypercapnia vary depending on the severity, ranging from mild headache, flushed skin, sleepiness, and dizziness to confusion, irregular heart beating, unconsciousness, and even death.

Respiratory failure reduces the person’s ability to eliminate carbon dioxide from the bloodstream and can lead to hypercapnia. Examples of conditions that can lead to respiratory failure include chronic obstructive pulmonary disease and asthma, lung and spinal cord injuries, and conditions affecting breathing muscles or brain regions that control breathing. In addition, metabolic conditions such as thyroid disease, neuromuscular disorders, and overdose of sedative medications can also cause hypercapnia.

Face masks act as a physical barrier that reduces the emission and breathing of infectious respiratory droplets[1], which are bigger than the pores in face mask materials. But as Health Feedback explained in an earlier review, gas molecules are much smaller that the mask pores, which allow them to pass through.

Because face masks can’t block gas exchange, they are extremely unlikely to cause significant changes in the blood level of carbon dioxide. As Sofia Morra, a cardiologist at the Erasme University Hospital in Brussels, explained to Health Feedback in an earlier review:

“Wearing a surgical mask for short periods of time does not impact significantly physiological respiratory variables[2] and thus, whenever a rise in CO2 occurs in the ‘dead space’ of the mask, it is unlikely that the magnitude of this increase would be sufficient to impair immune, neurological, or cardiovascular homeostasis.”

As the American Lung Association and the Mayo Clinic noted, empirical evidence from healthcare workers also contradicts the claim that face masks cause hypercapnia. Both organizations explained that healthcare workers have worn face masks for extended periods of time for decades with no evidence of adverse health reactions or negative impact on their work performance[2].

Another study conducted by researchers in Italy, evaluated the effect of surgical and N95 masks on different respiratory parameters in children during rest and physical activity[5]. The researchers didn’t observe any significant effects of surgical masks. While the use of N95 masks increased the levels of carbon dioxide in arterial blood, particularly during physical activity, the concentrations remained within a normal range. None of the children who participated in the study showed signs of respiratory distress.

In short, wearing a face mask may cause discomfort and slight changes in oxygen and carbon dioxide levels. However, it is extremely unlikely to cause a significant increase in carbon dioxide to the extent that it results in hypercapnia.

Park correctly stated that one potential complication of hypercapnia is respiratory acidosis. This condition results from the accumulation of carbon dioxide in the bloodstream to the point that it throws off the blood’s acid and base balance, making it too acidic. The kidneys can often balance out slow changes in blood acidity by regulating bicarbonate flux. However, when acidosis is very severe or happens suddenly the kidneys can’t compensate for it. In this case, acidosis may cause organ damage.

That said, there is no scientific evidence linking respiratory acidosis with cancer. As Health Feedback explained in earlier reviews, cancer is caused by mutations. These mutations can arise due to multiple factors, including random errors during cell division and environmental factors that damage the DNA. In addition, certain inherited mutations can also increase a person’s likelihood of developing cancer.

Many claims linking body acidity and cancer arise from a misinterpretation of the Warburg effect[6], a phenomenon described by the chemist and physician Otto Warburg. Warburg found that, while healthy cells preferentially produce energy using oxygen, cancer cells tend to obtain energy from fermenting glucose, a process that doesn’t use oxygen. This is unusual because fermentation normally only takes place in the absence of oxygen, but cancer cells use this process even when oxygen is present.

Glucose fermentation produces lactic acid as a by-product, making the tumor environment more acidic. This acidic environment serves as a hallmark of cancer progression[7] and, in some cases, might promote cancer growth[8,9]. But as Health Feedback explained before, this acidity is likely a consequence of cancer[6], and cancer cells can also grow in an alkaline environment[8,9].

Parks further claimed with no evidence that “We’ve already seen skyrocketing increases in the rates of cancer in our children”. According to the American Cancer Society, childhood cancer rates have been rising slightly for the past few decades. However, U.S. data on the rates of childhood and adolescent cancer are only available for 2019 and before. Therefore, at the moment, we don’t have sufficient information to compare childhood cancer rates from the last few years with data from the previous years. And even if there was an increase, it could be due to many factors other than the use of face masks, such as cancer diagnostic improvements and environmental factors.

In summary, Park’s claim that face masks lead to hypercapnia-induced acidosis and “when the body becomes chronically acidic it is permissive for cancer” is unsupported by any scientific evidence. No evidence indicates that face masks cause hypercapnia in the first place. In fact, available data shows that face masks don’t cause significant changes in carbon dioxide levels in the blood. Therefore, the claim that the acidosis resulting from mask-induced hypercapnia increases cancer risk is entirely baseless.

This review was updated to note that the investigation into America’s Frontline Doctors is still ongoing, and to clarify that the discussion about acidosis and cancer refers specifically to respiratory acidosis.