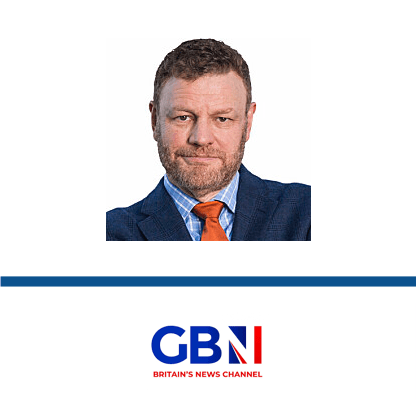 DETAILS
Inadequate support: Steyn claimed that sudden deaths among young people increased in 2021 based on anecdotal evidence and data that are either preliminary or don't support such a claim. There is also no evidence suggesting a link between COVID-19 vaccines and cases of sudden death.
Flawed reasoning: Steyn’s claim that countries with low COVID-19 vaccination rates had lower excess deaths than those with high vaccination rates relies on a correlation that only holds for July 2022. He failed to account for other factors that also directly impact mortality which differ between countries, such as healthcare capacity and demographic differences.
KEY TAKE AWAY

FULL CLAIM: “Anything going on in the third quarter of 2021? Well, that was actually the peak of vaccine mandates in America […] And oddly enough, that coincides with massive excess mortality among people in the prime of life”

On 24 August 2022, Mark Steyn, a host on GB News, a television and radio channel in the United Kingdom, claimed that young, healthy people died at a higher rate in 2021 than in previous years. Steyn suggested a link between this alleged increase in mortality and COVID-19 vaccination, although he didn’t state this out loud. The video received more than 230,000 views and 16,000 interactions on Youtube, and over 7,000 interactions on Facebook. GB News also shared the video on Twitter, where it received more than 500,000 views and 11,000 interactions.

To support his claim, Steyn cited cases of young people who died of cardiac arrest in the U.K. and mortality data from Canada, the U.S., and Europe, purportedly demonstrating higher mortality in 2021 compared to previous years. While the data he used is accurate, Steyn’s claims are misleading and based on incorrect interpretations and speculations that lack scientific support, as we explain below.

This isn’t the first time Steyn spread misinformation about the COVID-19 vaccines. According to the Guardian, the U.K. Office of Communications opened an investigation into Steyn in July 2022 for falsely claiming that people who had received a vaccine booster were three times more likely to die from COVID-19 than people who had received two doses or fewer. The fact-checking organization Full Fact explained that Steyn’s claim is inaccurate and based on a flawed interpretation of vaccine surveillance data.

As Health Feedback explained in earlier reviews, such correlations are oversimplified and highly misleading because they fail to account for other factors that also directly affect mortality, called confounding factors, that differ from country to country. These factors include differences in the epidemiological situation, healthcare capacity, as well as demographic differences like the health condition and age distribution of the population. Without accounting for the effect of these variables, such correlations don’t provide meaningful information about the impact of COVID-19 vaccination on mortality.

Steyn’s correlations also didn’t take into account the fact that countries have a mixture of vaccinated and unvaccinated individuals. By attributing the excess deaths directly to COVID-19 vaccination, Steyn’s underlying assumption is that the people who died must have been vaccinated. But this is a baseless assumption as there is no evidence to show that this is the case nor did Steyn present such evidence. This is known as the ecological fallacy.

Furthermore, Steyn’s claim is fundamentally flawed because he only considered the excess mortality in June 2022 compared with the average from between 2016 to 2019. These data don’t reflect the effect of vaccination on mortality during the worst peaks of the COVID-19 pandemic in 2021. 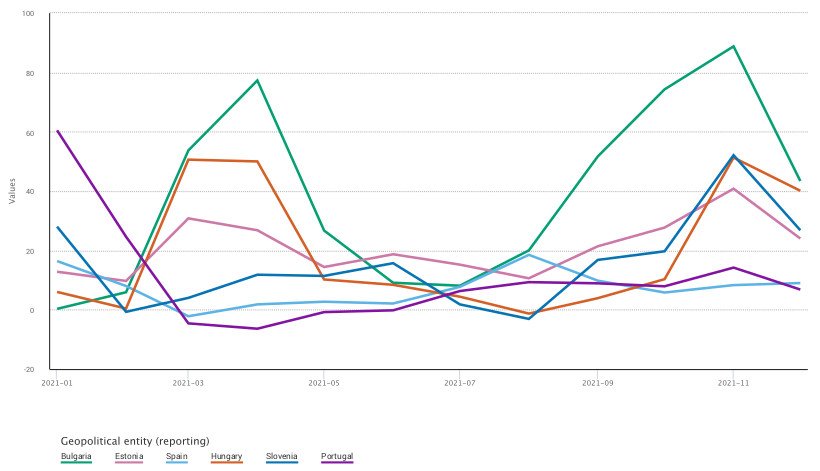 Figure 1. Excess mortality by month during 2021. Values (Y axis) are expressed as the percentage of additional deaths in a month compared to the average number of deaths in the same month over a baseline period. Bulgaria (green line), Hungary (orange line), and Slovakia (black line) show the highest excess mortality peaks, around January 2021 and November 2021. Source: Eurostat.

Therefore, Steyn’s claim that the least vaccinated countries have the lowest excess mortality applies exclusively to June 2022, but is clearly false for the two major COVID-19 waves in 2021, when countries with low vaccine coverage experienced much larger excess deaths than highly vaccinated countries.

Contrary to what Steyn suggested, studies comparing the proportion of deaths based on the vaccination status of the individuals show that COVID-19 vaccines reduce the risk of all-cause death. For example, the U.S. Centers for Disease Control and Prevention evaluated non-COVID-19 mortality among 6.4 million vaccinated and 4.6 million unvaccinated persons[1]. The study found that those who received any of the COVID-19 vaccines authorized in the U.S. (Pfizer-BioNTech, Moderna, and Johnson & Johnson) were up to three times less likely to die from any cause than those who didn’t receive the vaccine.

Leading causes of death in Alberta, Canada, in 2021 are still preliminary; claims that deaths due to “unknown causes” spiked in 2021 are currently unsupported

Steyn used a graph showing the “change in unknown causes of death” in Alberta, Canada, from 2019 to 2021 to claim that unknown causes was the leading cause of death in that province in 2021.

The data, released by Alberta’s Open Government portal on 30 June 2022, show that the number of deaths classified as unknown causes did increase from 2019 (522) to 2020 (1,464) and almost doubled in 2021 (3,362). However, Steyn’s claim is currently unsupported because definite data on leading causes of death in Canada is only available for 2020 and earlier.

The International Statistical Classification of Diseases and Related Health Problems by the World Health Organization defines Other ill-defined and unknown causes of mortality as “deaths with symptoms, signs, and abnormal clinical and laboratory findings, not elsewhere classified”. But this category also includes deaths that are still under investigation, as the press secretary to Service Alberta explained in an email to CTV News:

“The ‘other ill-defined and unknown cause of death’ classification is given when a cause of death cannot be determined, or when a death is still under investigation with a medical examiner. Some deaths originally coded in this way are updated as final determination of cause of death are determined”

In other words, a proportion of the deaths classified as unknown causes are based on provisional data that keep being updated as the territories determine the cause of death and report it. In fact, the press secretary pointed out to CTV News that the total number of deaths coded as unknown causes in 2021 as of 6 July 2022 was actually 35% lower than previously published in 2021.

Therefore, Steyn’s claim that deaths of unknown causes in Alberta spiked in 2021 and were the leading cause of death is premature and there is currently not enough information to confirm or refute his claim.

A large proportion of the excess deaths in 2021 are attributable to COVID-19; no evidence suggests that COVID-19 vaccines played any role

However, the insinuation that COVID-19 vaccines are responsible for this excess in mortality is baseless. AP News and PolitiFact evaluated a similar claim in early 2022 and found it to be false. They explained that a high proportion of the excess deaths can be directly attributed to COVID-19, which was the third leading cause of death in the U.S. in 2021. In addition, COVID-19 might have been indirectly responsible for many of the non-COVID-19 deaths, for example, due to delayed medical tests or treatments.

Steyn reinforced the idea that unexplained deaths are spiking among young people using four cases of young athletes—a bike rider, a boxer, a rugby player, and a football player—who died in the U.K. of sudden cardiac arrest. “Fit, healthy, in the peak of condition and dead. But nothing to see here,” Steyn claimed. Steyn also cited the example of a woman from Ontario, Canada, who died while jet skiing. He highlighted that she was a paramedic, stating that this meant “something can be inferred”. Steyn didn’t tell viewers what this “something” was, but it is likely a reference to COVID-19 vaccine mandates for Ontario healthcare staff, including paramedics, further implying a link between these sudden deaths and vaccination.

Claims that COVID-19 vaccines are behind sudden deaths of young, healthy people went viral in late 2021. Such claims may be partly based on the association between mRNA COVID-19 vaccines and a small increase in the risk of heart inflammation in adolescents and young adults, which some incorrectly linked to cases of sudden arrhythmia death syndrome (SADS).

According to the SADS Foundation, SADS is the result of genetic mutations that disrupt the electrical system regulating the pumping action of the heart. This can lead to abnormal heart rhythm (arrhythmia) and sudden cardiac arrest in young, apparently healthy people under the age of 40. However, no evidence suggests an association between COVID-19 vaccines and SADS, as Health Feedback and other fact-checking organizations like PolitiFact and FactCheck.org explained.

Contrary to what Steyn suggested, a March 2022 analysis by the U.K. Office of National Statistics found no evidence of a change in the number of cardiac-related deaths or deaths occurring from any cause following COVID-19 vaccination in young people aged 12 to 29 years in 2021.

Steyn’s insinuation that healthy people are dying at a higher rate than in previous years and COVID-19 vaccines are to blame is based on flawed analyses and is unsupported by the data he provided. Although he concluded by stating that, “But altogether now, correlation is not causation”, this doesn’t change the substance of the overall narrative he presented in the video: that COVID-19 vaccines are dangerous and associated with sudden deaths among young people. As we demonstrated in this review, his narrative is unsupported by scientific evidence, which shows that vaccinating against COVID-19 reduces the risk of severe illness and death.