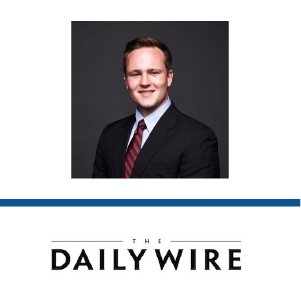 DETAILS
Lack of context: Research shows that the Great Barrier Reef faces ongoing threats from climate change, including warmer ocean temperatures and more intense tropical cyclones. These threats pose long-term danger to coral reefs and can easily reverse short-term growth in coral cover.
Misleading: The claim fails to note that the growth in coral cover is driven by Acropora, a genus of coral that’s particularly susceptible to stressors including coral bleaching, wave damage, and predators.
Overstates the scientific impact of a finding: After being hit by multiple, widespread stressors between 2014 and 2020, 2021 was a relatively stressor-free year for the Great Barrier Reef, giving coral cover a chance to recover, according to an Australian Institute of Marine Science report. However, short-term recoveries in coral growth can be reversed quickly, and are not proof that the Great Barrier Reef as a whole is growing.
KEY TAKE AWAY

As the planet’s largest coral reef ecosystem, the Great Barrier Reef is home to thousands of marine species and is a major contributor to the Australian economy. However, its size and status cannot protect it from the impacts of climate change. The reef remains vulnerable to ocean warming, more intense storms, predator outbreaks, and other stressors caused by climate change. Warmer ocean temperatures can cause coral to “bleach”, a process in which they dispel symbiotic algae living within their tissue, which leaves them weaker and more susceptible to death. Under the right conditions, bleached coral can recover, but a single, low-disturbance year does not provide scientists enough data to make judgements on overall reef health, as short-term recovery can quickly be reversed.

The Daily Wire published an article on 24 October, 2021 which claimed that a report from the Australian government found the Great Barrier Reef is “growing quickly”. The report the article references is the Australian Institute of Marine Science (AIMS) Long-Term Monitoring Program Annual Summary Report of Coral Reef Condition 2020/2021[1], which summarizes the current health of the three regions of the Great Barrier Reef (Northern, Central, and Southern) based on scientific surveys conducted between August 2020 and April 2021.

The Daily Wire’s claims misrepresent the findings of the AIMS report. The report stated that, after being hit by multiple, widespread stressors between 2014 and 2020, including “numerous severe tropical cyclones and three mass coral bleaching events in five years”, 2021 was a “low disturbance” year for the Great Barrier Reef. This lull in stressors allowed corals on the reef to begin recovering, and coral cover increased across all three Great Barrier Reef regions between 2020 and 2021. However, this increase in coral cover does not mean the reef is “growing quickly”, as claimed in the article. A single year is far too short a timeline to judge overall reef growth, explained Professor Terry Hughes, former director of the ARC Centre of Excellence for Coral Reef Studies. “The reefs are not growing or shrinking – that’s a geological process that occurs over centuries or more,” he said. “Growth rates of individual corals is not a conventional way to assess the condition of reefs.”

A key point of context that was missing from the Daily Wire article is that the increase in coral cover described in the AIMS report is being driven by Acropora coral. This fast-growing genus tends to be more susceptible to wave damage, coral bleaching, and predation by the crown-of-thorns starfish. That means that, when faced with these stressors, any increase in Acropora coral cover that was previously documented can quickly be reversed.

“The corals that grow back rapidly – Acropora ‘branching’ corals – are also very sensitive to human impacts, so this recovery will be temporary if climate change continues,” Chris Brown, a senior lecturer in the School of Environment and Science at Griffith University in Queensland, Australia, said. “A shift in the types of corals will have implications for the animals that use them as habitat, including the Great Barrier Reef’s valuable fisheries”.

The AIMS report stated that the Great Barrier Reef continues “to be exposed to cumulative stressors, and the prognosis for the future disturbance regime is one of increased and longer lasting marine heatwaves and a greater proportion of severe tropical cyclones”. It also notes that the recovery outlined in the report “has been seen previously and can be reversed in a short amount of time”. This is important context that the Daily Wire article leaves out.

“Some types of coral will grow back rapidly after diebacks if they are left undisturbed,” Brown said in an email. “Unfortunately, the future prospects look dire, we expect heatwaves like that to occur 1 in every 3 years in the future due to climate change and greenhouse gas emissions.”

Predictions like that are important for the long-term health of reefs, because frequent marine heat waves (along with other frequent disturbances) make it difficult for corals to make long-term recoveries, especially longer-lived species. As Hughes et al. noted in a 2017 study[3]:

“The recovery time for coral species that are good colonizers and fast growers is 10–15 years, but when long-lived corals die from bleaching their replacement will necessarily take many decades. Recovery for long-lived species requires the sustained absence of another severe bleaching event (or other significant disturbance), which is no longer realistic while global temperatures continue to rise. Therefore, the assemblage structure of corals is now likely to be permanently shifted at severely bleached locations in the northern Great Barrier Reef.” 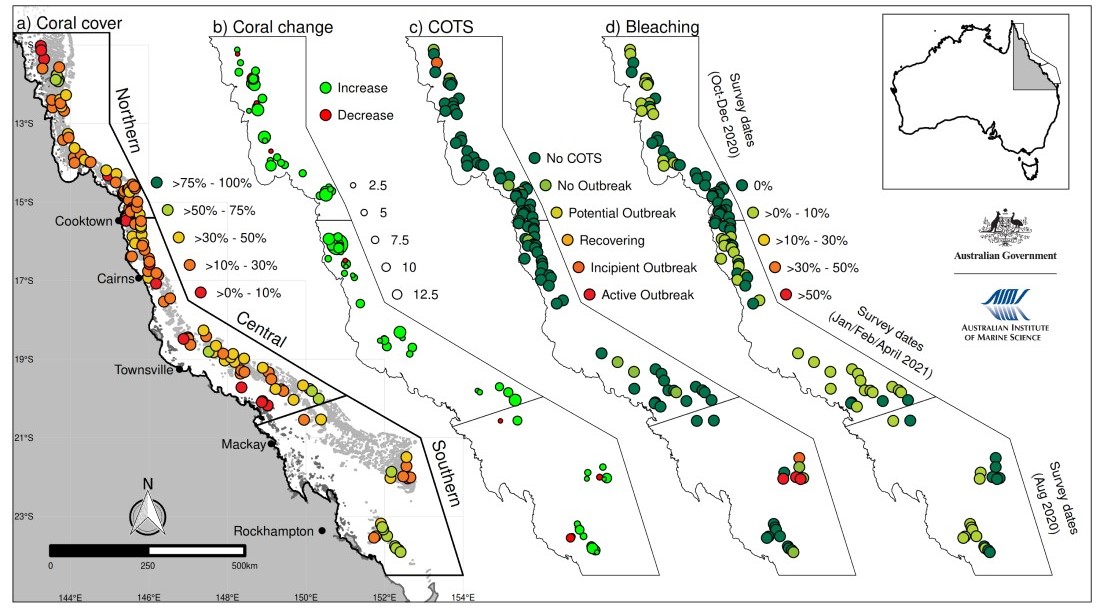 Figure 1—The AIMS report visualized why August 2020 – April 2021 was a relatively good year for coral health in the Great Barrier Reef: low rates of bleaching and crown of thorns starfish (COTS) led to increases in coral cover across many of the reefs. The figure shows: a) The percentage of hard coral cover along the different segments of the reef. b) How different regions of the reef have changed in coral cover between 2021 and the previous survey (i.e. levels of increase or decrease in coral cover). c) The presence and severity of the COTS outbreak throughout the reef’s regions. d) The percentage of coral colonies affected by bleaching during the survey dates.

Contrary to the Daily Wire’s claim, researchers found that coral growth rate on the Great Barrier Reef has declined in recent decades. In a 2012 study[4], for instance, De’ath et al. state that “coral cover depends not only on mortality from acute disturbances but on rates of growth. Rates of coral calcification on the GBR [Great Barrier Reef] and many other reef systems around the world have declined by 15–20% since ∼1990 due to increasing thermal stress”. Hughes et al. (2019)[5] also found that, in the Northern and Central Great Barrier Reef, corals’ rate of recruitment, which is the rate at which coral larvae attach themselves to a substrate and grow into adult coral, “has been substantially diminished” due to climate change and other stressors. Because of this diminished recruitment rate, the reef’s resilience to bleaching is “compromised”, the study stated. Lastly, a 2020 study by Dietzel et al.[6] documented “the systematic decline of absolute coral abundances across size classes, habitats, sectors and taxa on the GBR over the last two decades.” Along with thermal stress, more intense tropical cyclones are predicted to continue to threaten the Great Barrier Reef as climate change progresses: as Cheal et al. (2017)[7] note: “increases in cyclone intensity predicted for this century are sufficient to greatly accelerate coral reef degradation.”

Since 2009, the Great Barrier Reef has faced three bleaching events, a wave of crown-of-thorn starfish outbreaks, and 17 cyclones. The coral growth seen during 2021 is encouraging, but as climate change continues, the reef risks having fewer and fewer low-disturbance years like this one to recover.

UPDATE (2 Nov. 2021): The Daily Wire has issued a correction to its article, updating the headline to make clear the distinction between coral cover and reef size, and adding more context about Acropora coral. It also corrected the claim that coral cover in the Central Great Barrier Reef grew by 26% during the study period.

Chris Brown, Research Fellow, Griffith University:
Some types of coral will grow back rapidly after diebacks if they are left undisturbed. There was an unprecedented heatwave in 2016 that caused coral bleaching and death, so some regrowth since then is expected. Unfortunately, the future prospects look dire, we expect heatwaves like that to occur 1 in every 3 years in the future due to climate change and greenhouse gas emissions.

Australia has some of the highest per-capita emissions of any nation globally, and fossil fuel extraction that contributes significantly to greenhouse gas emissions here and overseas. So it’s crucial for corals and all of Earth’s ecosystems that Australia urgently commit to substantial and rapid action to reduce fossil fuel extraction and emissions. With the COP upcoming in Glasgow now is the time to do that.

Independent surveys of the Great Barrier Reef conducted by the Reef Life Survey confirm that the health of the reef’s corals is currently poor (you can view trends for habitat cover, ie corals, here). Recent and ongoing heatwaves are a major contributor to that, as are impacts from pollution and crown of thorns starfish predation.

The report from AIMS also notes the types of corals growing on the reefs are changing. The corals that grow back rapidly – Acropora ‘branching’ corals, are also very sensitive to human impacts, so this recovery will be temporary if climate change continues.

A shift in the types of corals will have implications for the animals that use them as habitat, including the Great Barrier Reef’s valuable fisheries. In 2016 we observed changes in the fish community in response to loss of corals and directly to the heatwave. The Reef Life Survey are conducting ongoing monitoring of the fish, which will help inform us about the impacts of these changes on valuable fisheries.

Terry Hughes, Professor, ARC Centre of Excellence for Coral Reef Studies, James Cook University:
The report points out that where coral cover has increased (after bleaching in 2016 and 2017), the new corals are weedy species that are the most susceptible to the inevitable next heatwave. According to the report, one in six reefs surveyed in early 2021 has shown no increase in coral cover. None of the 20 reefs survey by AIMS in the southern region were affected by coral bleaching in 2016, 2017 or 2020.

Many of these climate change denying blogs seem to confuse ups and downs in % coral cover with “reef growth” or “coral growth”. The reefs are not growing or shrinking – that’s a geological process that occurs over centuries or more. Growth rates of individual corals is not a conventional way to assess the condition of reefs.

Another source of confusion in these blogs is relative versus absolute changes in coral cover. For example, an increase from 10 to 12% is often misrepresented as a 20% improvement, instead of a 2% gain (and an absolute change, up or down, of 2% is well within the measurement error).